A concert was held at the National Theatre to celebrate Prof. George Worlasi Kwasi Dor, an Art Music composer who has taught and mentored many Ghanaian composers. He is currently the McDonnell Barkdale Chair of Ethnomusicology, Professor of Music, and the founder and director of the African Drum and Dance Ensemble at the University of Mississippi. His publication, West African Drumming and Dance in North American Universities: An Ethnomusicological Perspective, is currently held in over 1,300 libraries in the world such as Stanford University Libraries, Princeton University Library, and Cornell University Library. 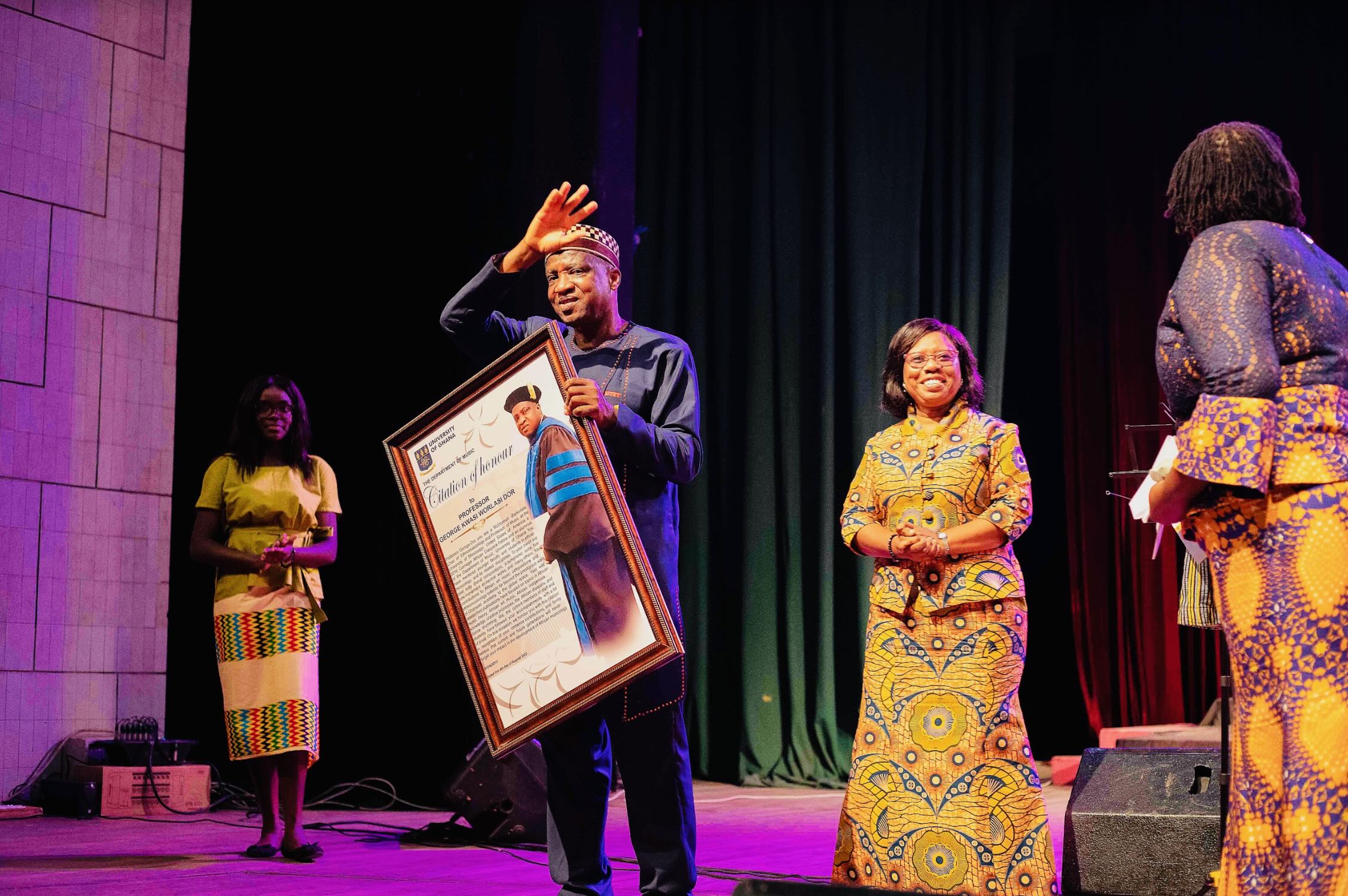 He once worked with the Ghana National Symphony Orchestra as a cellist and, later, directed the orchestra for 8 years before leaving to study in the USA in 1996.

The event, which was held on Thursday, the 4th of August, was organized by Newlove Annan (Art Music composer and lecturer at the Department of Music, Wisconsin International University Ghana), Dr. Benjamin Amakye-Boateng (Department of Music, University of Ghana), and James Varrick Armaah (Executive Director, Harmonious Chorale Ghana). 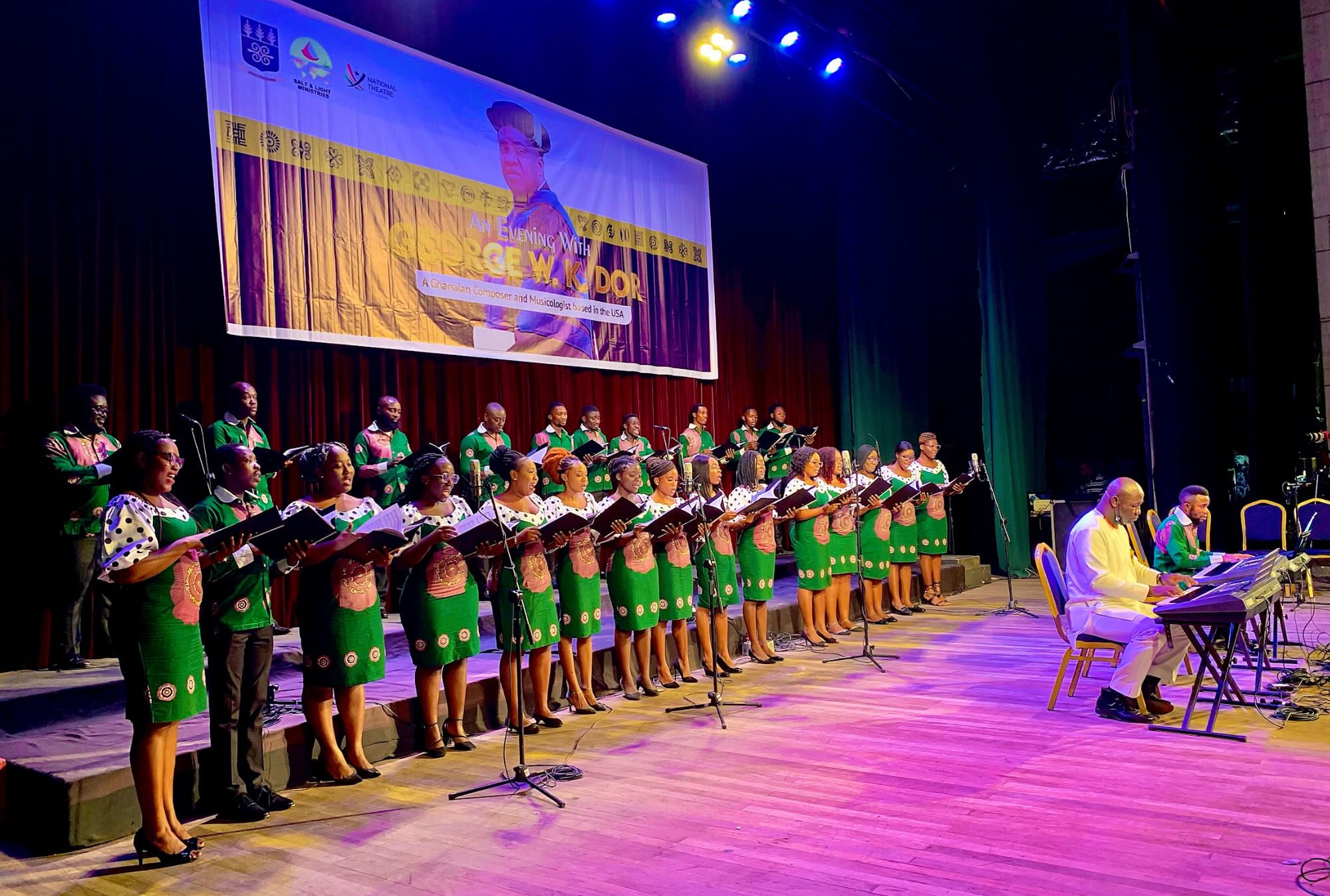 The Ghana Police Band played a medley of hymns written by the composer of the night, during which most of the audience got to hear for the first time, a composition by his father, Seth Dor. That work, "Tsor dzidefo yi aza”, was arranged by the band’s conductor, Elikplim Adzroe. Seth Dor was the founder and director of the Unity Orchestra which operated from the 1950s to 1960s. He is also known to have made an E flat Clarinet. 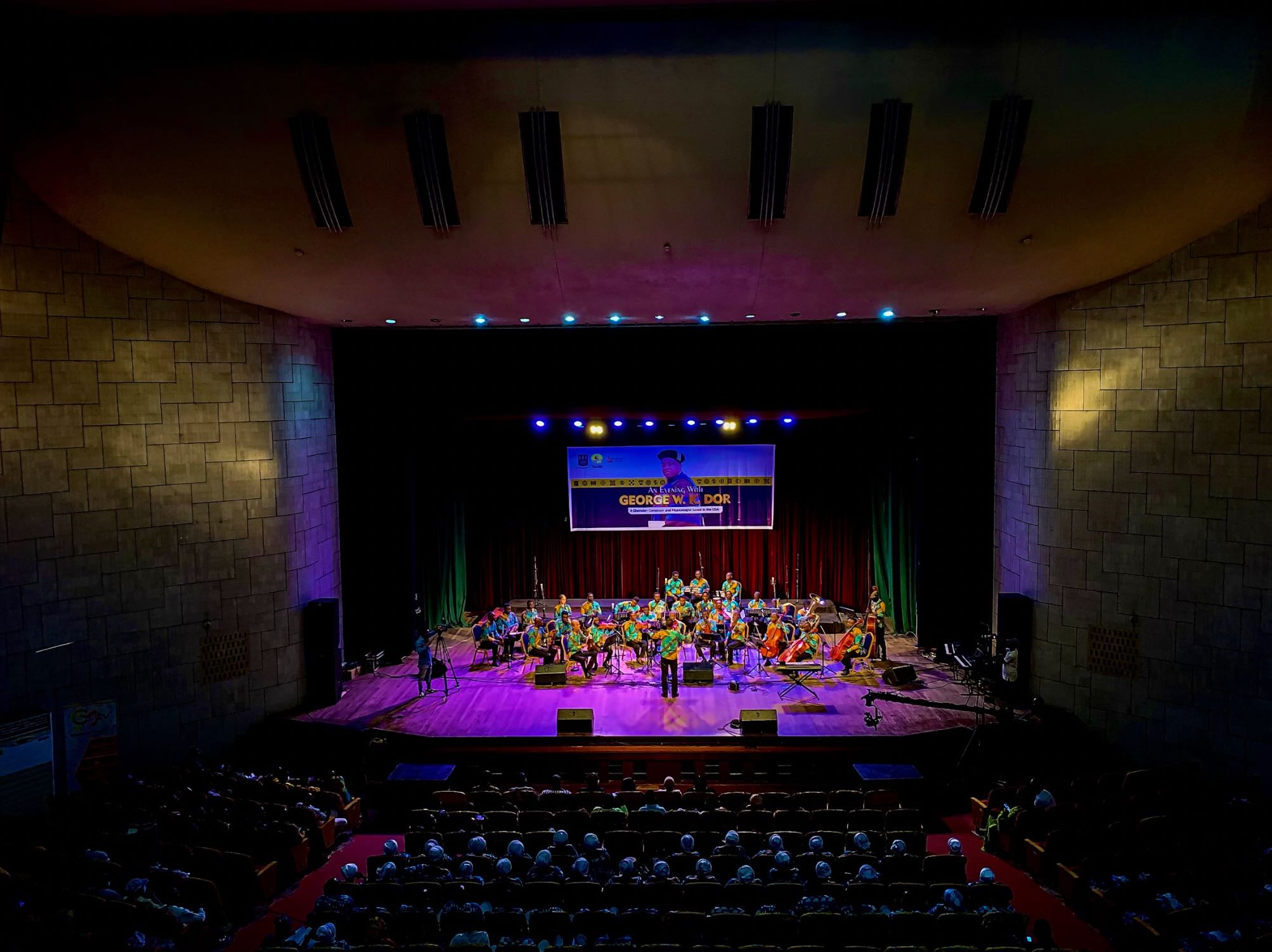 The night would not have been complete without us hearing George Dor’s iconic work “Echoes” performed by the National Symphony Orchestra. A closer look reveals that he was inspired by the writing styles of Ephraim Amu and J. H. K. Nketia. The listener who is familiar with Amu and Nketia will immediately recognize melodic and rhythmic phrases employed in “Echoes”. This illustrates Dor’s intent; to echo the works of his predecessors. Another work which was new to the audience was his Fraternity Suite I which could easily pass for film or program music. 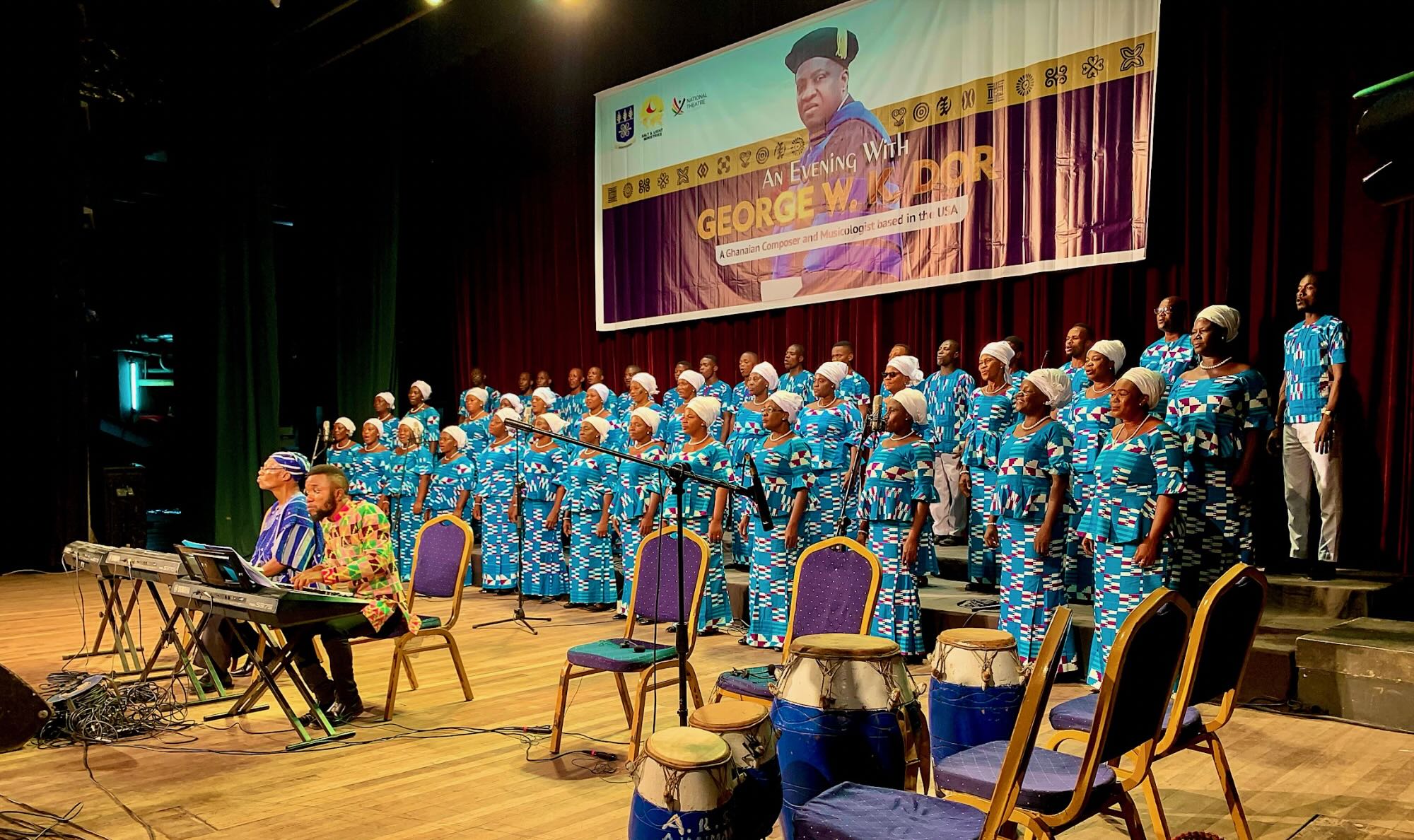 The performance of Dor’s choral works began on a rather nervous note. Thy Kingdom Chorale, gave a splendid performance of a speech-like piece, “Mega lam o”. This performance was followed by the entry of ARS Selah Choir to the stage to perform “Yrami”, “Midzihayeye”, and “Agbefiala gborn”.

The UG Department of Music mixed chorus sang "Agbenya la le dzroyem", EP Hymn 238, a hymn that is unique by the chromaticism used in its melody. This hymn got the majority of the audience singing along; a testament to its popularity.

Another phenomenal performance was of "Milo mia noewo Yesu" by the Ashaiman Central ARS Choir. Greater Accra Mass Choir followed it with a performance of “Nkegbe didi”, a short work in which Dor uses fugues and counterpoint to express the longing for daybreak. 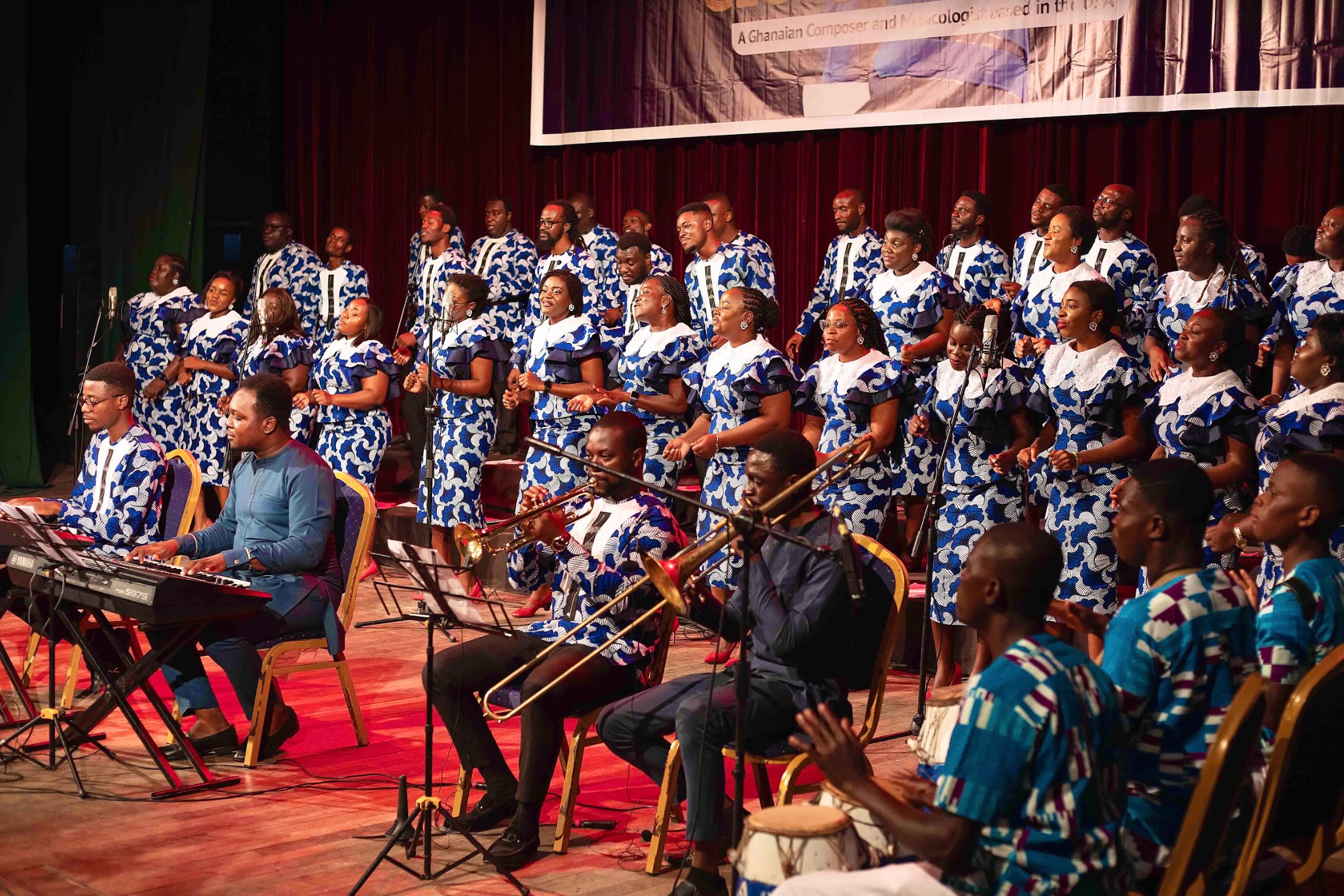 To end the event, Prof Dor’s "Ghana mia denyi gba nyui la", one of his patriotic songs was performed by the mass choir. The audience joined the mass choir by dancing as the agbadza rhythm accompanied.

It is hard to ignore the uniqueness of George Dor’s work, which sets him apart from his contemporaries. Prof. Daniel Avorgbedor agreed with this when he asked George what distinguished him from other composers. Dor asserted that his Alavanyo background played an important role in his idiosyncratic style of composing. He added that anytime he heard his music being performed, it sounded like his father was speaking to him. He went on to give an example of a melodic phrase that he mostly uses that one would hardly hear being used by other composers.

The concert succeeded in bringing the somewhat obscure works of George Dor to light. For us, its success supports the fact that Ghanaian folk tunes can be developed into more complex instrumental works.

About the Author: Kwaku Boakye-Frempong is a writer at Choral Music Ghana, a composer, piano instructor and accompanist.