Geneveeve Enam Akpalu did not miss Gramphone Ghana’s most recent Fellowship of Songs held last week. This edition was extra special too: it was the first anniversary of the event; an important milestone in Ghana’s choral music scene.

I cannot begin this review without first applauding Gramophone Chorus for being time conscious. This is a trademark of theirs; at least, for the last two Fellowship of Songs (FOS) I have attended. 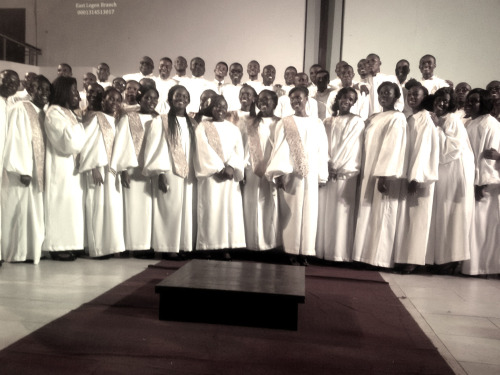 The FOS is a quarterly event organized by Gramophone Chorus, to bring all Christians together to fellowship. It features hymns, classical pieces and hi-life medleys. The peculiar thing about this fifth edition, themed Always On Our Side, was that it was the first anniversary of the event. You could see and feel from the repertoire that their hearts were full of gratitude to God for the one year of the programme’s successes amidst various challenges.

Their joy was palpable.

When I arrived at 5:50pm, the opening prayer was already being said. (They’d asked that all be seated by 5:45pm for the commencement of the programme at 6:00pm.)

A sextet of alto and soprano gave the opening welcome; a beautiful rendition of Lift Thine Eyes (Psalm 121). The piece created a calm atmosphere for the audience to receive the rest of the ministration.  The MC, Dr. Clement Appah (who also sang a solo in the third package) gave a brief welcome and at exactly 6:00pm, the choir walked onto the stage beautifully clad and armed with their files.

The first package began with O Thou Who Camest From Above (Psalm 99:1, Psalm 20:7) followed by How Great Thou Art and then rounded up with Battle Hymn of the Republic, which quickened the tempo of the event.

Dr. George A. N. Donkor delivered a sermonette on the text Luke 10:25-30. In his message, he enjoined both the congregation and choristers to seek to move from their Jericho into the New Jerusalem, a place of blessing and eternal rest in God. 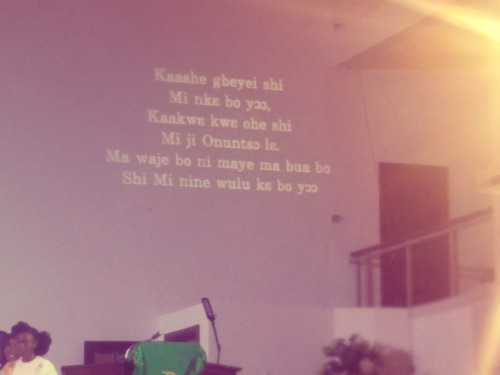 To go on, I must say that the congregation was well behaved, for the most part, clapping at the end of the songs and not during the singing. It was only until they were invited to join in singing Kaashe Gbeyei (George Mensah Essilfie) in the second package and thereafter.

This brings us to the second package. This included Nyame Mma Monto Dwom (Sam Asare Bediako), Praise Him! Praise Him!, Kaashe Gbeyei and The Blood Will Never Lose Its Power (Andrae Crouch).

In commemoration of the anniversary, a cake was cut. The General Manager, Maukeni Padiki Kodjo, on behalf of the choir and Gramophone Ghana, was especially grateful to God, parents and the congregation for supporting and being with them from the inception of FOS. Thanks Be To Thee (G. F. Handel) was accordingly chanted by the choir. 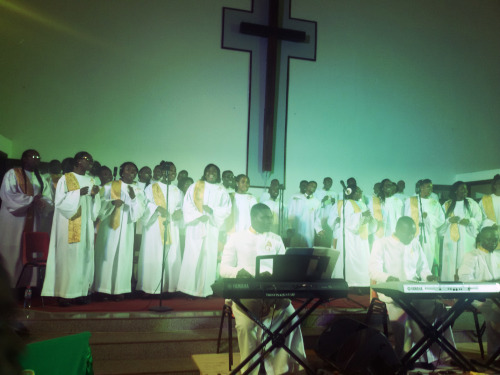 The audience was treated to two of their favourite songs the choir had ministered in previous FOSs - Gyataburuwa, Thine Be The Glory and Sam Asare Bediako’s  Meyi M’akyea brought the third package to a close.

Stage craft was good, not excellent. The choristers did not rise or hold their files in uniformly. But that did not take away the beauty of the whole event. The voice of the choir was spot on and in harmony. Their diction was superb, as was their phrasing. And all these contributed immensely to my loving the ministration. The sound engineer did a great job although I could not hear the alto parts too well.

FOS is free but the cost involved is quite huge! There was a fundraising through sales of their CDs and pledges.

Being Ghanaian, and being a night of thanksgiving, FOS could not have ended without a hi-life medley. There was so much energy from both choristers and dancers.

It was an awesome experience and a memorable Sunday evening. Kaashe Gbeyei and Gyataburuwa continue to linger on my lips. I look forward to FOS VI in December 2015 which will most probably be at their usual venue – the Trinity United Church on the Trinity Theological Seminary Campus, Legon.

Gramophone, for the love of Jesus.