The Creator's Tribute by Chorale Africa

One of the most anticipated events in recent months, Chorale Africa’s inaugural concert titled “The Creator’s Tribute”, took place on the evening of Sunday the 28th of January, at the La Palm Royal Beach Hotel. The concert was the first step in the new choir's five-year plan to be the best choral ensemble in Africa.

The invite-only event was graced by a number of significant figures in Ghana’s music industry. Some of these included Prof. Sakyi-Baidoo, a composer and lecturer based in Winneba, Ben Adjei, one of Ghana’s foremost soloists, Alfred Kpedzro-Grant, founder of the Basic Schools Choral Festival and Augustine Sobeng, principal organist at Harmonious Chorale.

For what seemed like an important moment in the recent history of Ghanaian choral music - the first concert of a choir that wants to take performance seriously - the lack of more known faces was telling, as was the fairly modest audience it was able to gather for what turned out to be quite a remarkable night. Still, for the first event of a choir that was unheard of six months ago, the numbers were impressive. 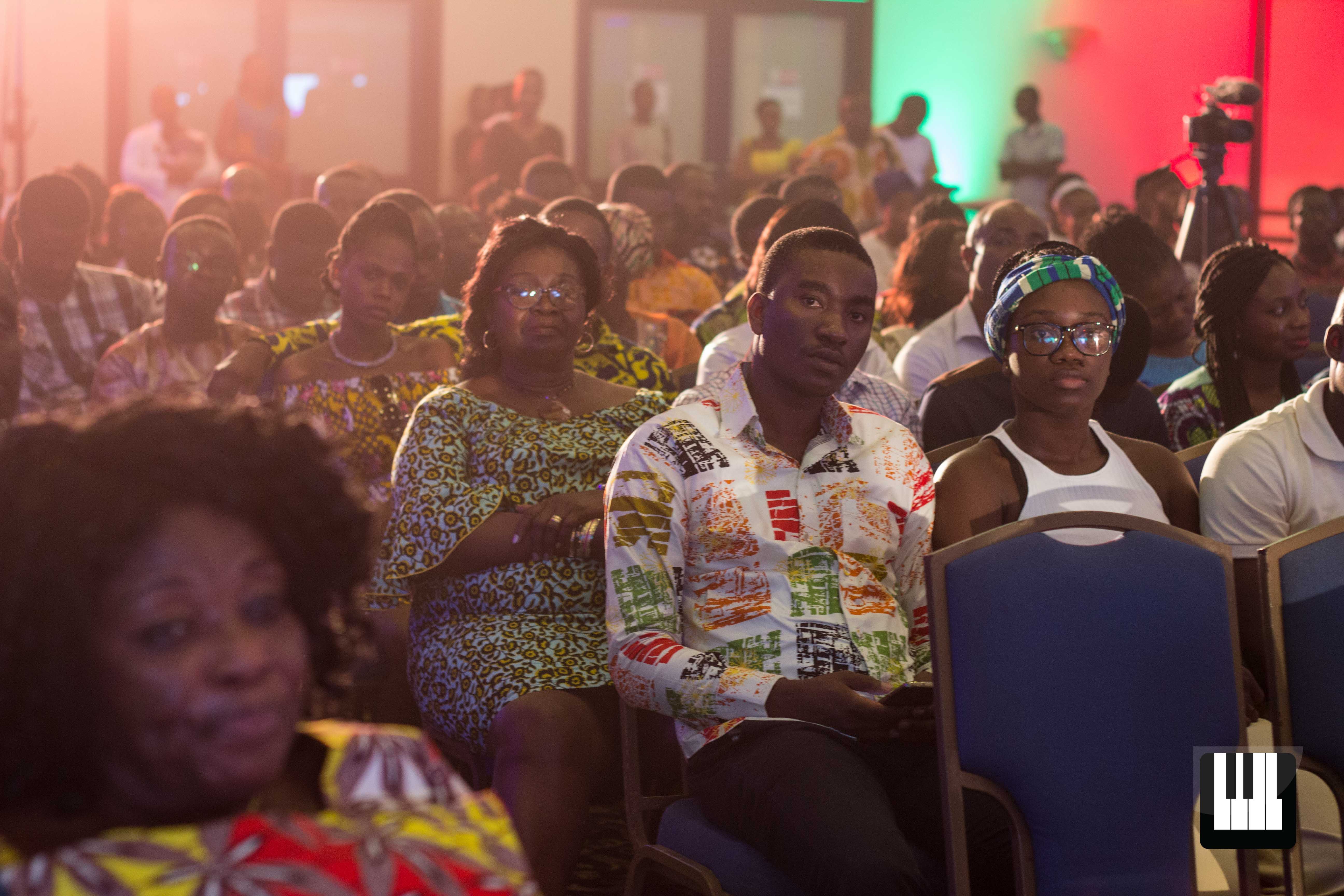 The Creator’s Tribute began with a short opening prayer by the MC, Mr Stephan Antoh, a few minutes after five. Nayra Thompson-Mensah, the Vice-President of Chorale Africa introduced the event to the audience after this. In her words, The Creator’s Tribute was not a glitzy showcase of the best voices in the country, but rather a night of thanks and worship.

As if to emphasize this, the MC, on returning to his podium, read some verses from the Book of Psalms, prepping the audience for the show. Our first hints of the cultural point-of-view of this choir came when Stephan took the audience through a concise (but remarkably well-informed) history of “choral music” in Ghana. Citing its Western origin and importation into West Africa by the continent’s colonizers, he acknowledged some of Ghana’s earliest composers - Allotey-Pappoe, Riverson - and the man regarded as the contemporary tradition’s founder - Dr. Ephraim Amu.

Concerning Amu, the MC highlighted his “innovative” use of “vernacular” in music, and digressed a little to point out the derogatory nature of the term that ignores the diversity of local languages the Europeans had excluded from their opinion of the “acceptable practice” of music.

On that note, members of the choir were invited to the stage to begin the evening’s program. 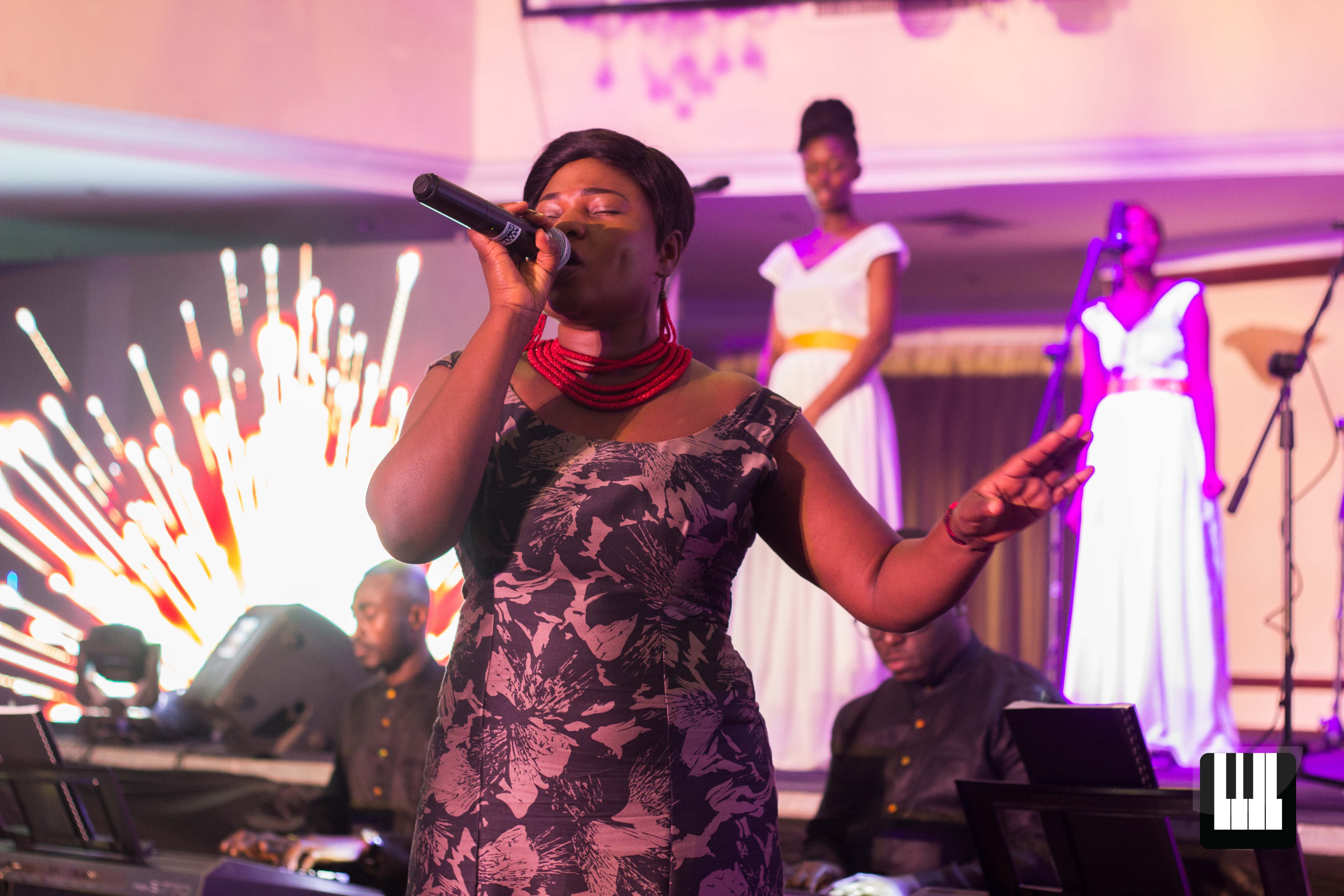 The program was divided in three sections: the first was dedicated to worship in the “charismatic” style. The earlier prepping by Mrs. Thompson-Mensah and the MC helped explain the appearance of a worship leader and her eight backup singers. The four keyboards emulated the parts of the usual Gospel band. For those of us who came to witness a “choral” event, the change in atmosphere - the freer improvisatory singing of (and accompaniment to) the contemporary worship songs - was fascinating. Perhaps, what was more interesting was the composure of the audience throughout the worship section. More people than I expected remained seated, paying attention. Although the performance was accessible, only a few people in the auditorium seemed inclined to honour the invitation. When the worship section ended, the audience applauded.

The full strength of Chorale Africa mounted the stage, and their director, Ebenezer Edem Beble, took the conductor’s stand. By the time the concert-proper began, little more than half the seats in the auditorium were occupied. This grew as the event progressed. 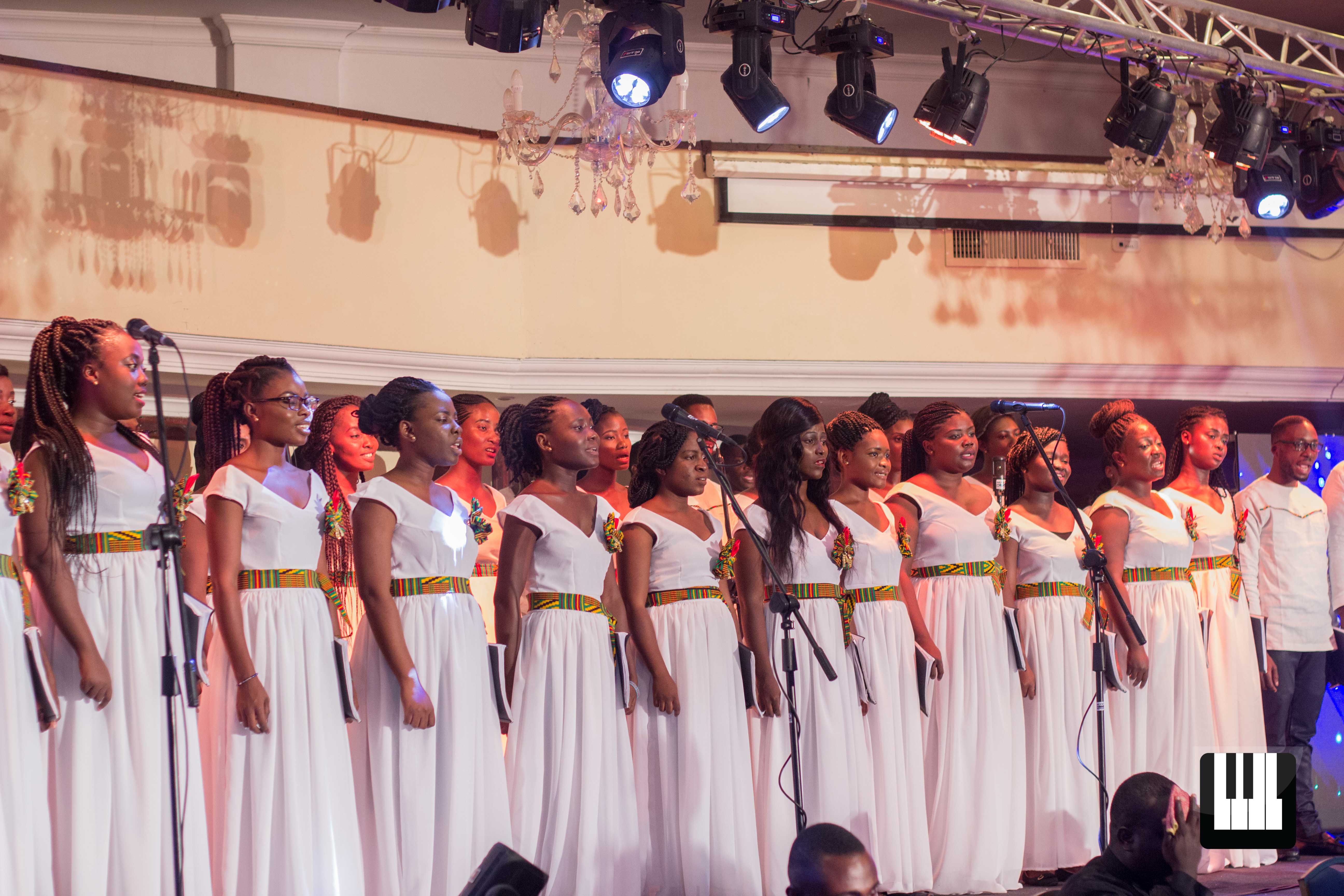 The first piece publicly performed by the new choir was Mack Wilberg’s stirring arrangement of “Come, Thou Fount of Every Blessing”. This arrangement sees the upper voices of the chorus enter in sequence, each time in the middle of a phrase, gradually building up a brilliantly unsettling a cappella harmony throughout the first stanza of the hymn. After the accompaniment responds with a restatement of the entire theme, the lower voices thunder - again a cappella - the opening lines of the second stanza. Again, Wilberg’s oddly-timed entries for each voice in this stanza and at the beginning of the next, and the almost sprightly pauses from the chorus make for interesting musical moments in the otherwise common hymn. The sound of the seventy unaccompanied voices was absolutely stunning. Throughout this performance, the entire hall was silent. Only after the hymn did the audience seem to explode with applause.

The next set of hymns, fairly traditional arrangements of “Praise to the Holiest in the Height”, “Amazing Grace”, and “Great is Thy Faithfulness” were met with similar enthusiasm from the audience. The last hymn, “How Great Thou Art”, ended with a livelier marching rhythm from the keyboards and ushered us into the first local anthem; Sakyi-Baidoo’s "Hallelujah". After this, the choir performed James Varrick Armaah’s “When I Look Up”. Augustine Sobeng’s “Joy in Our Hearts” concluded part one of The Creator’s Tribute.

The MC returned to offer more comments on the “six-month old” choir, the concert so far, and Ghanaian choral music. He offered one more tidbit on the life of Ephraim Amu: the pioneering composer was sacked from his station at Akropong for introducing Ghanaian languages and instruments in choral music. After his dismissal, he moved to Achimota Secondary School - then a breeding ground for the future nation’s leaders - to teach music. It was there that he made some of his most important nationalist work. 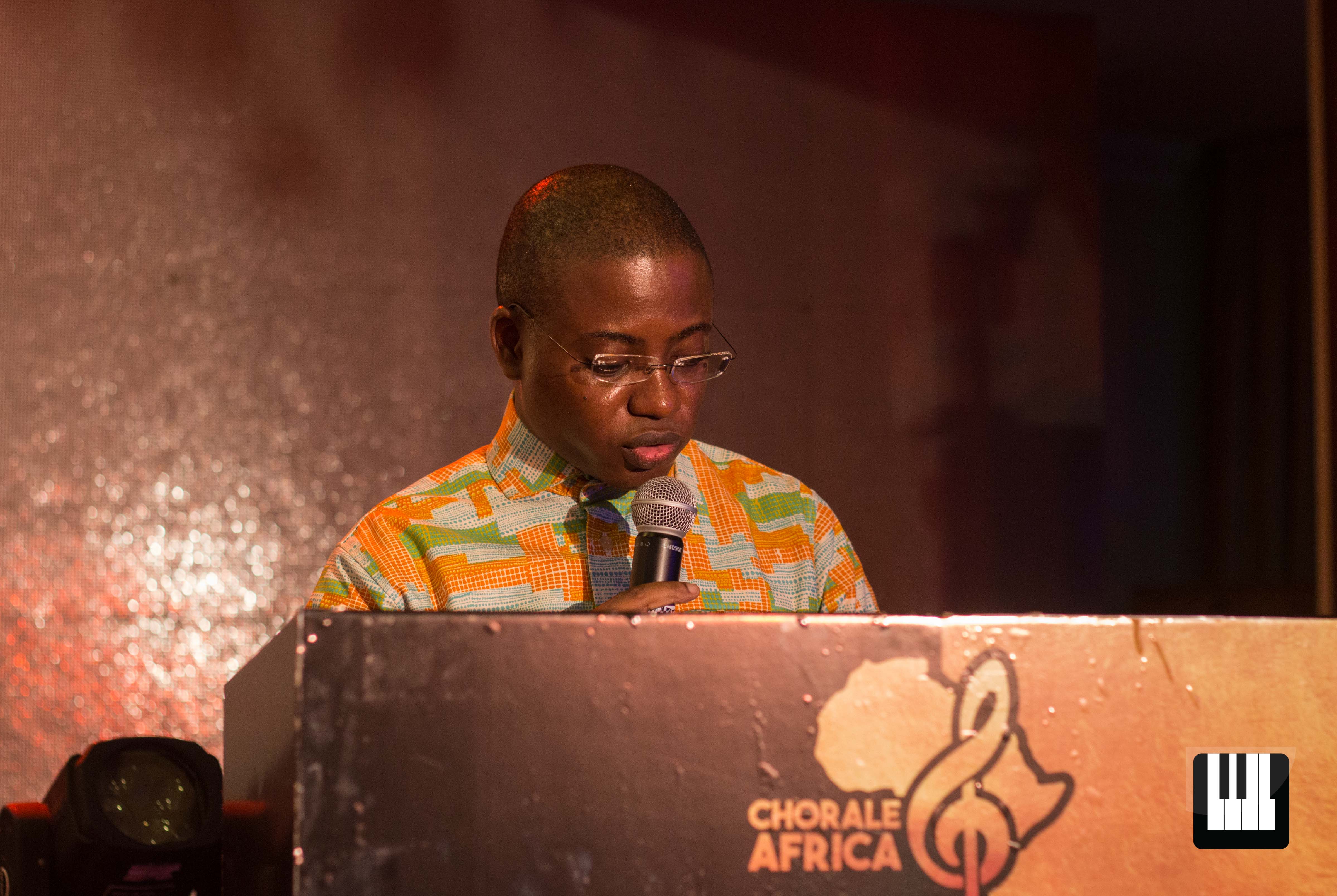 Mr. Osah Thompson-Mensah, the founder whose vision the choir now carries, took the podium to address the audience. Referencing several difficulties he faced in organising this event, he was thankful to “the Creator” for the success of the production so far. He re-emphasised his vision of building an African brand that the continent will be proud of - for its musical and charitable work. He announced The Creator’s Tribute will be an annual event occuring on the last Sunday of January. Each “Creator’s Tribute” will mark the beginning of the choir’s calendar.

The second part featured works from elsewhere on the African continent and from Europe. It began with three solos, two of which were different settings of the “Ave Maria” from Schubert and JS Bach/Charles Gounod, and the Grammy Award-winning duet “The Prayer”. 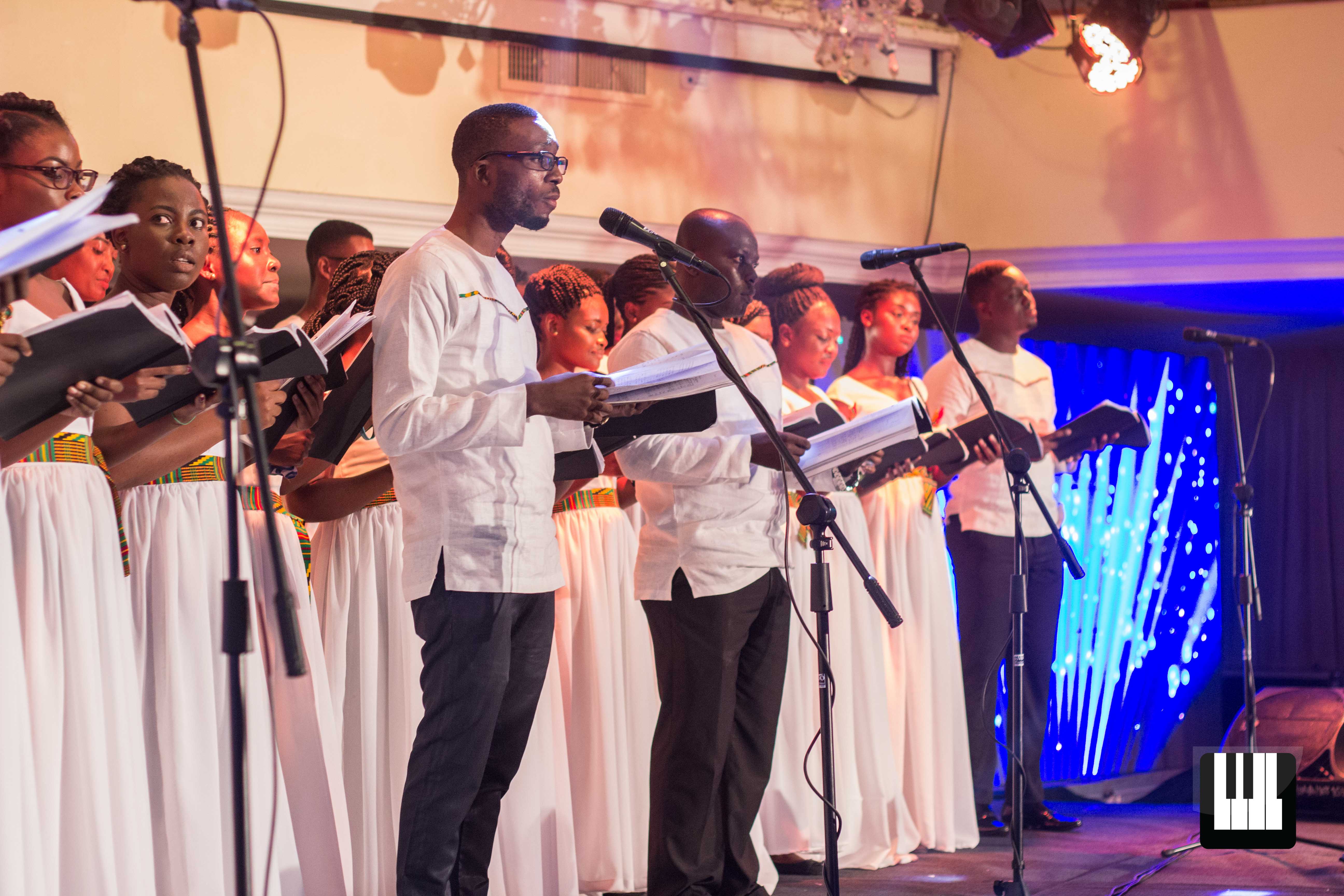 Among the African pieces performed included "The Lord’s Prayer" and "Bethelehemu", Wendell P. Whalum’s famous Yoruba carol performed by VocalEssence Chorale during their Christmas concert last year. Music from Haydn’s "The Creation" - "Achieved is the Glorious Work" and "The Heavens are Telling" - and Beethoven’s "Hallelujah" from "Jesus on the Mount of Olives", was also performed. "The Heavens are Telling" was performed at a deliberately slower tempo, allowing the singers to communicate more clearly. Also worth noting was the use of an all-male trio for this anthem.

Whereas some of these latter anthems were not as spellbinding as those that opened the concert, the choir’s strengths in its 70-man chorus and confident soloists was appreciated, especially during the Beethoven anthem.

The night ended with a thirty-minute highlife medley that finally got the audience on their feet in praise and worship. 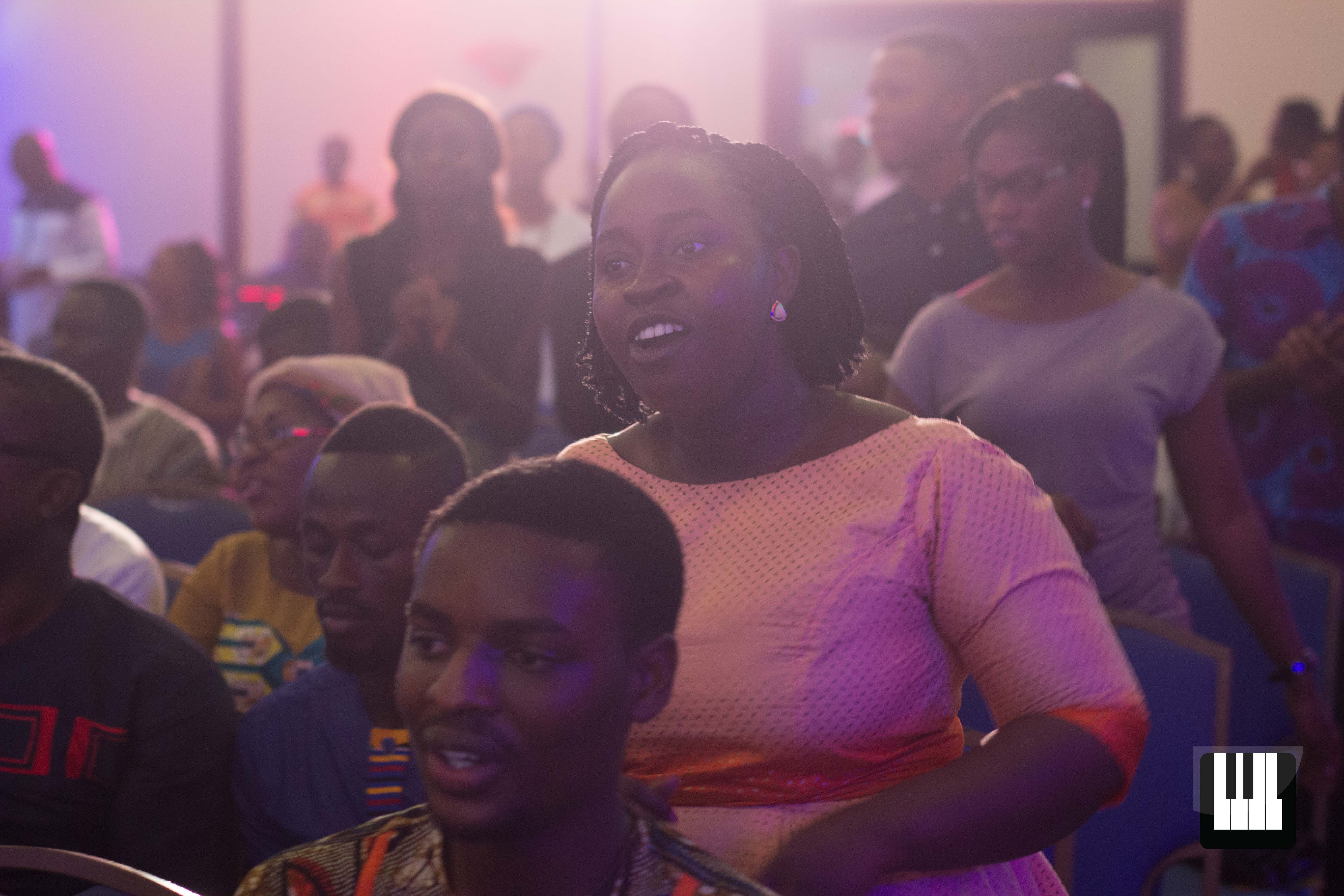 Chorale Africa’s first event was an exciting display of music from a group determined to do it better than any other in the country - and the continent - so far. While they clearly have some way to go to achieve excellence in music performance and the top place in the hearts of many fans of Ghanaian choral music, this start was strong, and The Creator’s Tribute leaves us with the impression that Osah and his team have got what it takes to make an impact in this cultural heritage.

We’re keen on their next event, which promises to showcase the best of our continent’s music. If there’s one niche in the industry worth exploring, Chorale Africa is about to break new ground in a significant way. Serious listeners can only be happy about this.