The most infamous year of our lives must have felt like it will never end, but here we are, in its final days, with the opportunity to look back on the most unprecedented 12-months in our recent memory.

Our great year opened innocently enough, with a Varrick Armaah concert that did not feature the choir for which he is most famous. Varrick Productions teamed up with Think Media Expert, a multimedia company for the first edition of the Juvenile Art Music Expo, an effort to celebrate child and young adult talents. The concert, held at the Christ the King Parish Hall, featured soloists on flute and the keyboard performing student pieces and works from the Western canon, and large ensembles fielded by the Garrison Children’s Voices and the Children’s Choir of Corpus Christi Catholic Church, Sakumono.

January saw another big launch announcement from a stalwart of Ghanaian art music composition and choral performance, George Mensah Essilfie. The founder of the Winneba Youth Choir introduced SingAfriChoral, a non-profit focused on promoting African art music, in a press release first published through Choral Music Ghana. The ambitious effort to institutionalise the support for indigenous art music, with an explicit bias towards folk traditions, was in many ways a natural outgrowth of the founder’s own art: George Mensah Essilfie remains one of the few Ghanaian composers whose works intentionally experiment with folk sources, both traditional and contemporary. Some of these enduring compositions include an arrangement of “Zamina Mina”, a cadence call associated with the oral tradition of West African militaries, and “Yaa Amponsah”.

The non-profit’s first assignment was the production of Songs of Akotam, a musical featuring twelve art songs written by the composer. The musical was the main act of the Kalabashi Concert, which was scheduled for the 5th of April. The musical was to be performed by members of Harmonious Chorale Ghana, backed by an artistic team including Samuel Arko Mensah, Sarah Boye, Joseph Boako and James Varrick Armaah.

This concert was not to be. 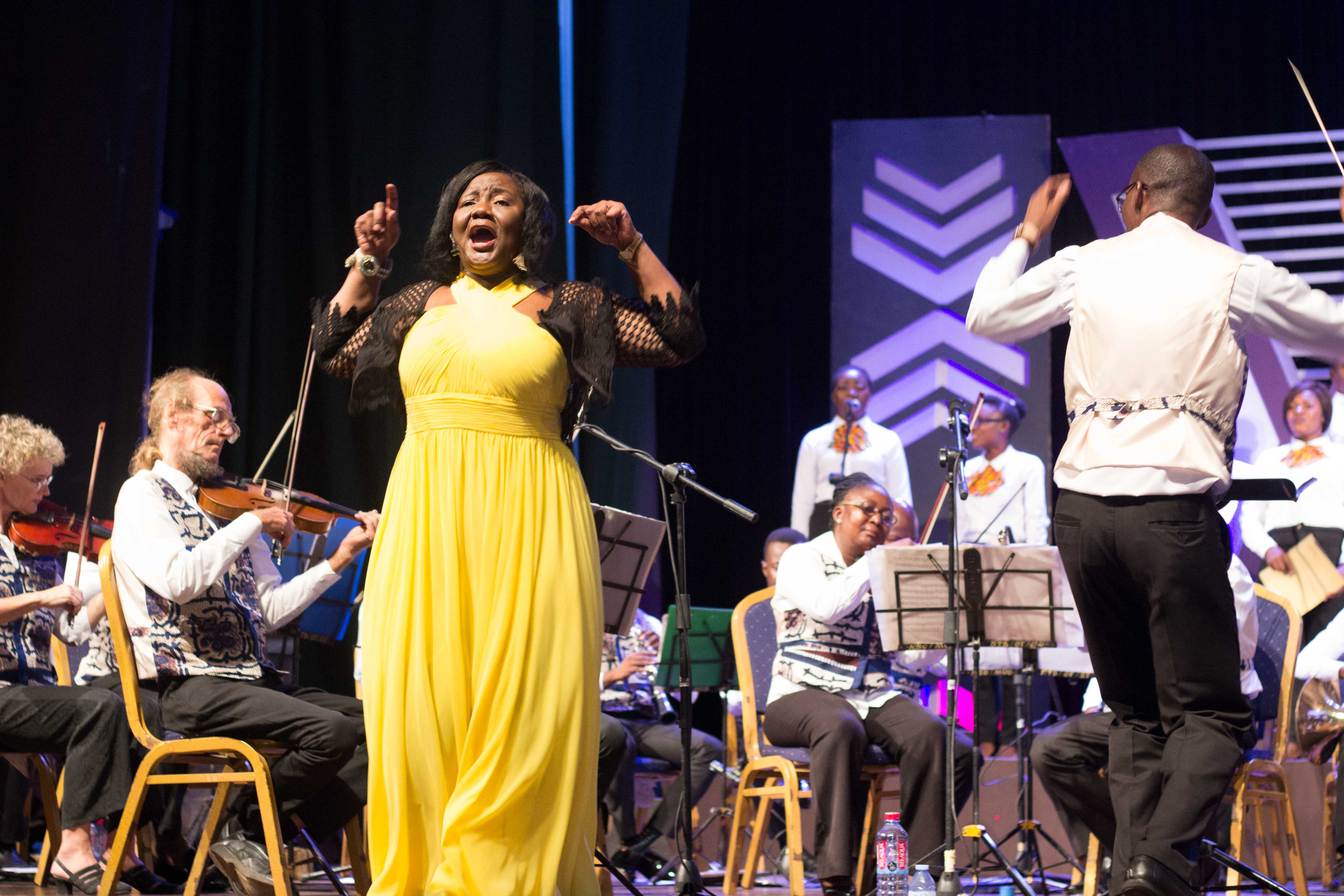 Our musical year continued with the return of Margaret Ferguson to the Ghanaian stage, in a concert that in one crucial way failed to live up to its importance: very few people heard of, and made it to “The Return Concert”. It was her first public performance in Ghana in twenty-seven years. The Return Concert saw Margaret share the stage with her younger brother, Edwin, singers from Seasonal House Opera, and nine-year old Etornam Agbodza-Gbekle. The singers were accompanied by the full strength of the National Symphony Orchestra.

Margaret’s visit to Ghana included a stop at the Afro Classical Nights show on 27th February.

The fateful month of March was to be a big one for the classical music community. The first major public recital by pianist Constant Ahadzivia (DipABRSM) was to be hosted on the first anniversary of the passing of Dr. Nketia, the academic who put Ghana on the global ethnomusicology map. It was to be hosted at the Ghana Club, a historic sea-side club house that has already boasted the presence of world class musicians in recitals in recent months. Music for the recital included works from Beethoven and Chopin, Nketia and Kafui, the pianist’s mentor. 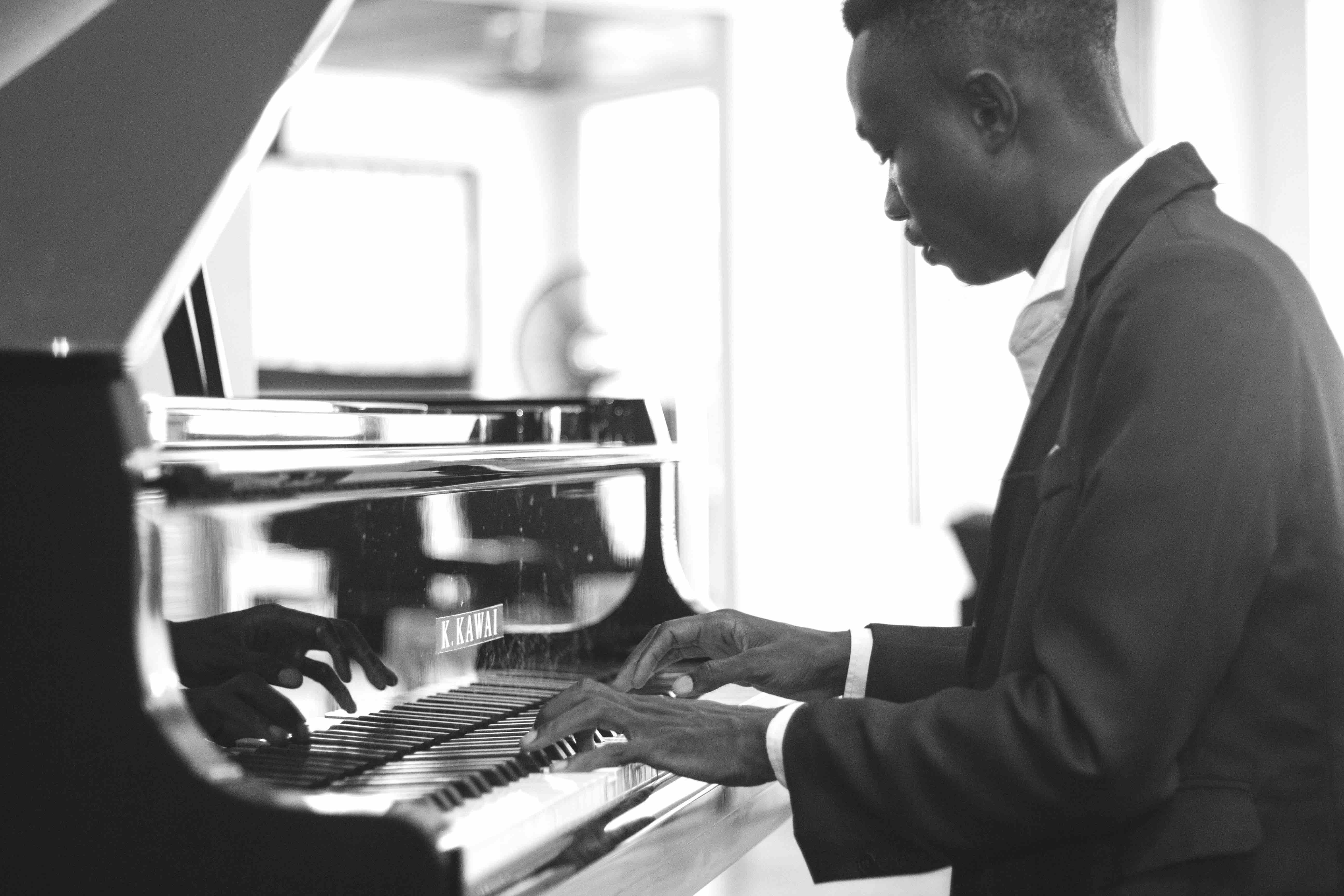 In the months that led up to this moment, while the musical community planned and prepped for a year of the usual, a storm that had been brewing since late 2019 was engulfing the globe, and countries around the world were grinding to a halt under the reality of life in a pandemic. The night before the recital, the Information Ministry officially announced the presence of COVID-19 in Ghana, with the first case occurring within the expat community.

The next afternoon, with less than 6 hours to go, the recital was cancelled. Moments later, we learned that Gramophone Ghana had cancelled their flagship workshop program: the New Year Voice College. The jig was up. Accra was shutting down.

The following days saw the cancellation of several events we were already looking forward to, including Pax Choir Ghana’s Choralfest, one of the country’s largest choral events. Afro Classical Nights was suspended indefinitely. Most upcoming Easter concerts also fell under the hammer, when the president announced restrictions on movements and public gatherings, enforced with police and military presence on the streets.

It was during this dark period that Ghana lost one of its greatest composers: Kenneth K.A. Kafui, former conductor of the National Symphony and an American Medal of Honor recipient, the composer of Mida Akpe and Pentanata (op 10, nos. 1, 2). His death, which occurred on the morning of 18th March at Nyaho Clinic, came barely a year after the passing of Dr. Nketia. 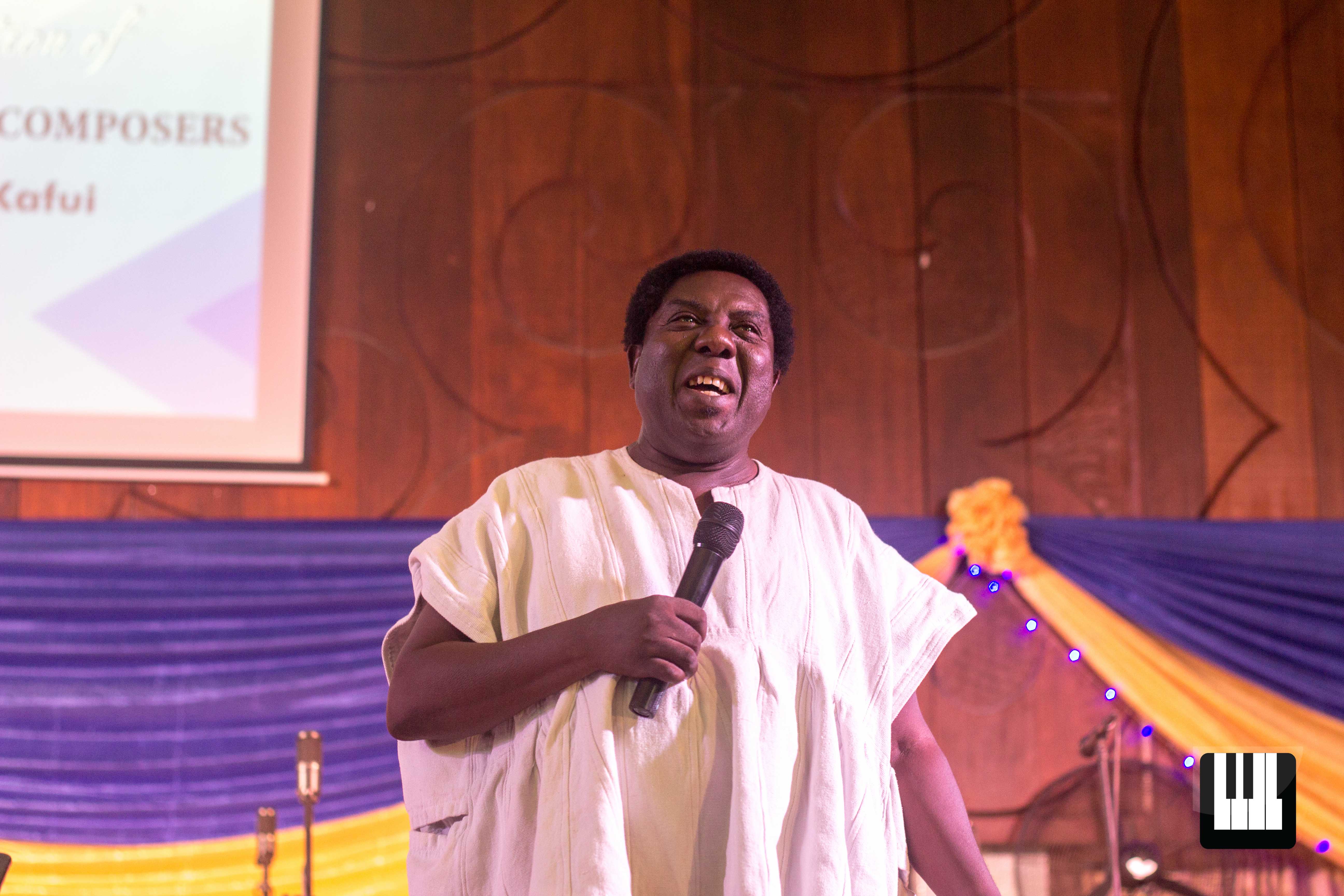 We’ve previously covered what some of our favourite musicians were up to when their gigs dried up and, like the rest of us, they were holed up indoors with not much else to do. The period of restrictions saw an amazing amount of content generated on social media. Perhaps the most popular trend in Ghana’s musical community was the #OneStanzaChallenge.

In the year without Easter concerts, virtual recordings, stitched together by media teams from the various choirs were another avenue for ensembles to gather and share the gift of music with the rest of the world.

Gradually, the heaviest restrictions eased up, and people were finally allowed to gather in person. With churches opened for business, concerts also resumed - with a twist. One of the highest profile virtual concerts, by a wide margin, was Harmonious Chorale’s Festival of Praise and Worship, streamed live from the Christ the King Parish Hall in Accra. This “Virtual Experience” saw thousands of fans flock to YouTube and Facebook to support the choir that had seen them through the worst of the pandemic with weekly ministrations at their Weekend Worship with Harmonious Chorale series. 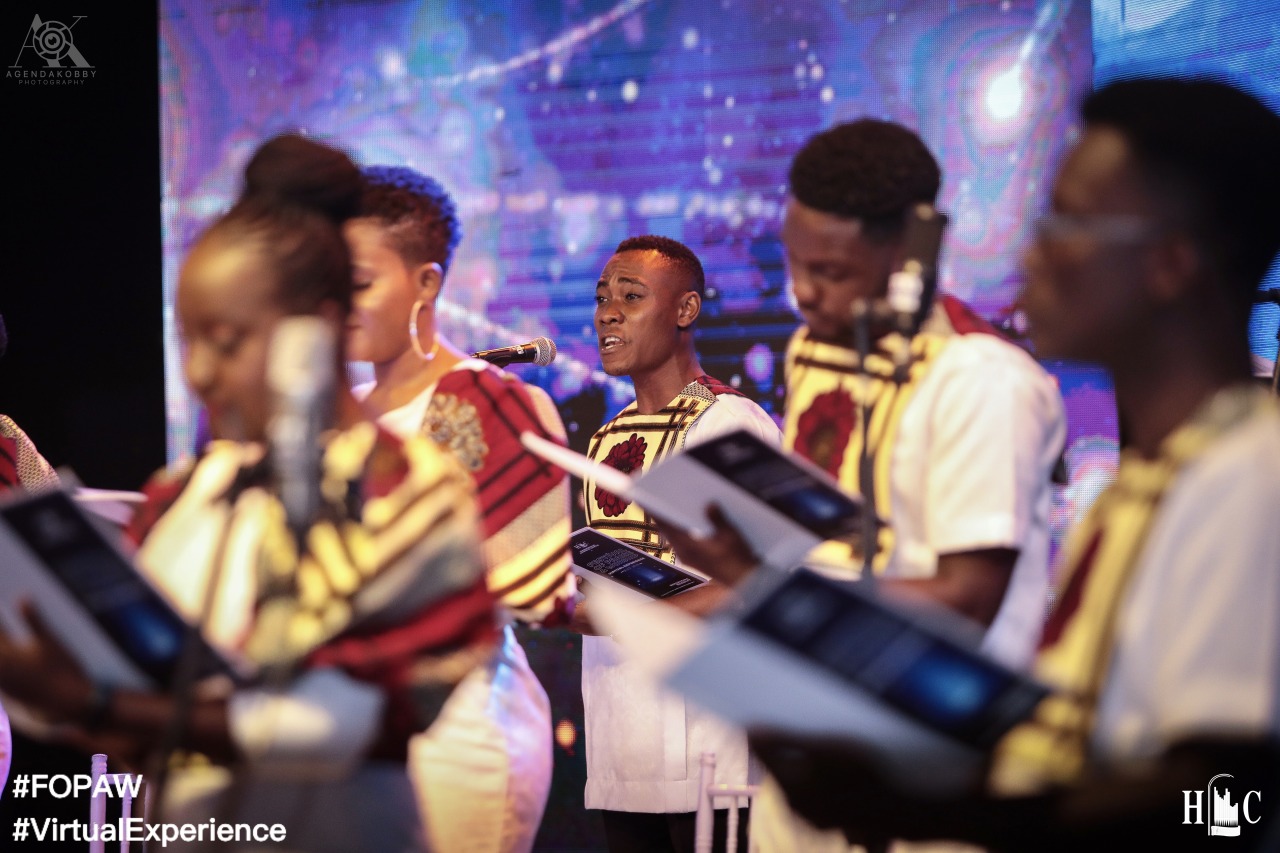 Ben Adjei, a popular tenor soloist and music director marked the fifth year of his musical career with an online video series. What began as a workshop for singers quickly evolved into a series of conversations with personalities in the music space about concerns with a heavy bias towards vocal performance.

The Tamale Youth Choir held its first virtual concert, Aroma of Praise, in the second half of the year. The young choir, led by Samuel Dowaana Mensah, a protege of Mr. Armaah, has attempted to translate the vibrant choral and classical music culture prevalent in the south into the northern context, by introducing southern-style music and performances in Tamale, as well as by composing original choral works in more relatable languages.

The prelude to the concert was a fifteen-minute highlife session and countdown. It featured works from the likes of Handel, Rutter, Gaddiel Acquaah and Kwesi Twum-Ndur’s ‘Gye hen’.

In August this year, a new choral festival, modelled after successful festivals in Europe, was launched in Nairobi, Kenya. The Africa Cantat Festival, supported by the European Choral Association, the Mpesa Foundation and others, was held virtually due to COVID-19 restrictions across the continent. The festival hoped to bring voices and ideas from all over Africa and beyond together to interact and celebrate their shared cultural heritage. Choral Music Ghana was invited to participate in workshops at the maiden edition of the festival.

Citi TV, one of Accra’s most prominent private TV channels, premiered their Keyboard Idol reality show, which aimed at unearthing keyboard talents under 15 years of age, and promoting the spirit of healthy competition among youngsters. The program saw 10 participants compete for a grand prize of ten thousand cedis. The nation-wide contest saw over 300 prospectives compete for the cash prize and bragging rights as the first Keyboard Idol.

Keyboard Idol met with tragedy when one contestant, Chris Tamakloe, lost his life in a motor accident while en route to Ho after an episode of the show. 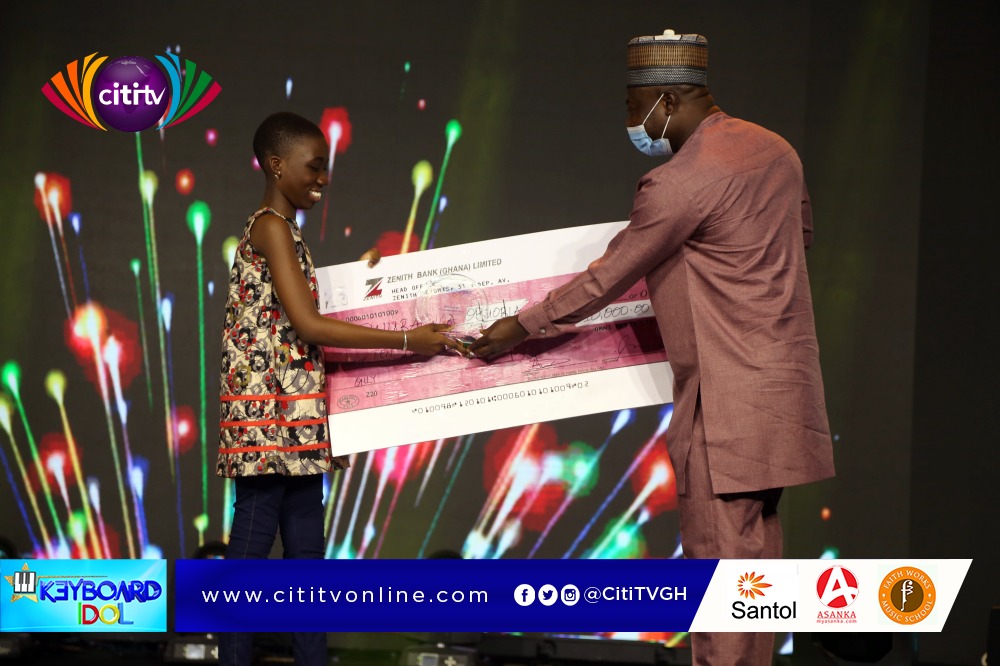 The contest was eventually won by Ewuradjoa Boateng. Ewuradjoa has performed more than once at Afro Classical Nights and was a participant in George Francois’ masterclass for beginner pianists held at the Australian Ambassador’s residence in August 2019.

The Indigen Theatre Company put together a virtual production of musical drama to celebrate the life of Dr. Nyaho Tamakloe, founder of the Nyaho Medical Centre, one of the most high profile private hospitals in the country. The musical, titled “Napo: A Musical Tribute” was written by Vako Ferguson, daughter of the esteemed soldier and medical doctor. The event was put together to climax the 50th anniversary of the institution, and the 19th of its founder’s death. 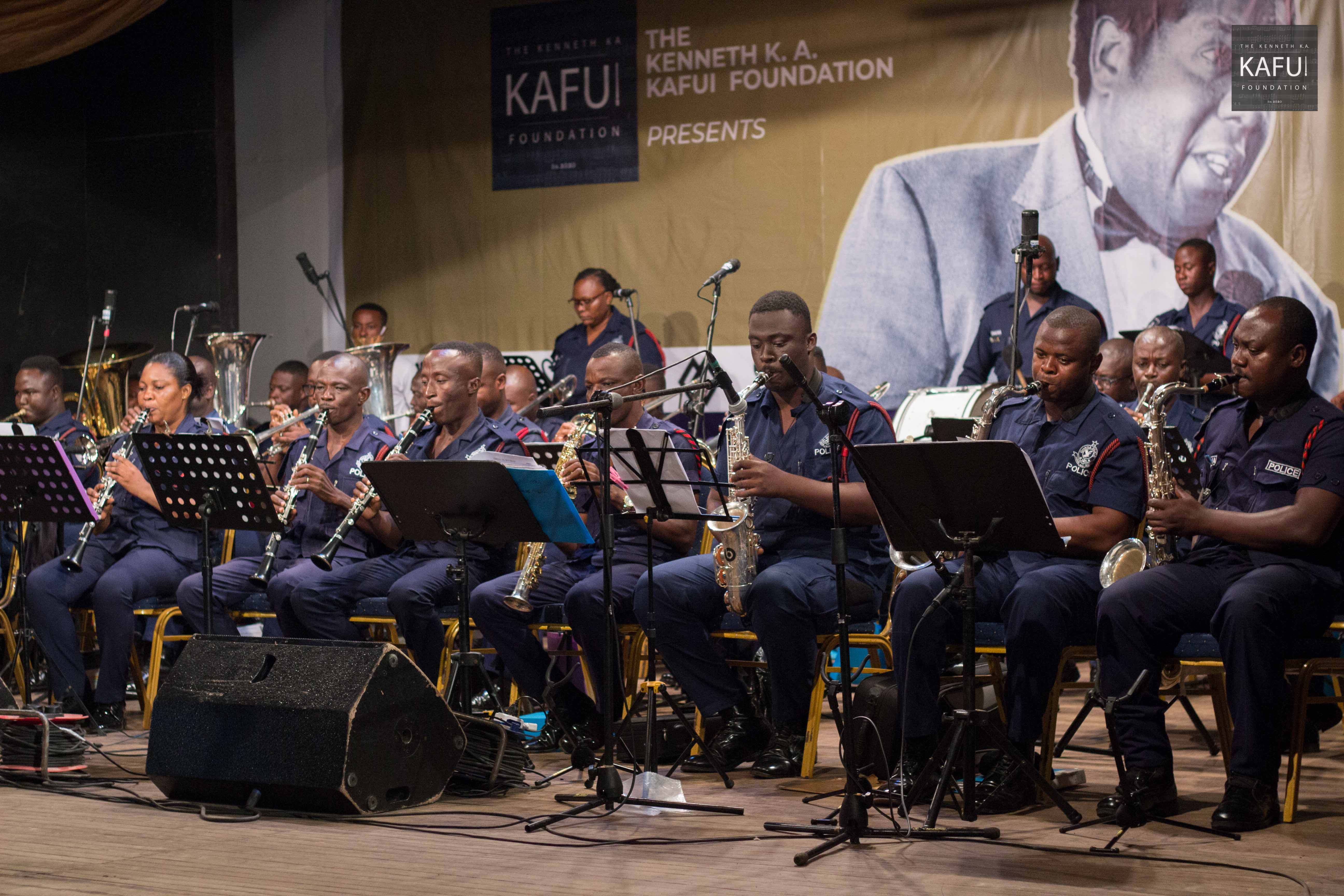 The Kenneth KA Kafui Foundation, established by friends and family of the composer in the wake of his death, put together a memorial concert at the Efua Sutherland Theatre of the School of Performing Arts, where Kafui last taught. The concert saw his music performed and tributes from family and friends read to a select live audience. Performances were put together by invited soloists including Kelvin Uhondo, Désiré Siehou and Ben Adjei. The Ghana Police Band performed under the baton of Elikplim Adzroe, while Harmonious Chorale was led by James Armaah. 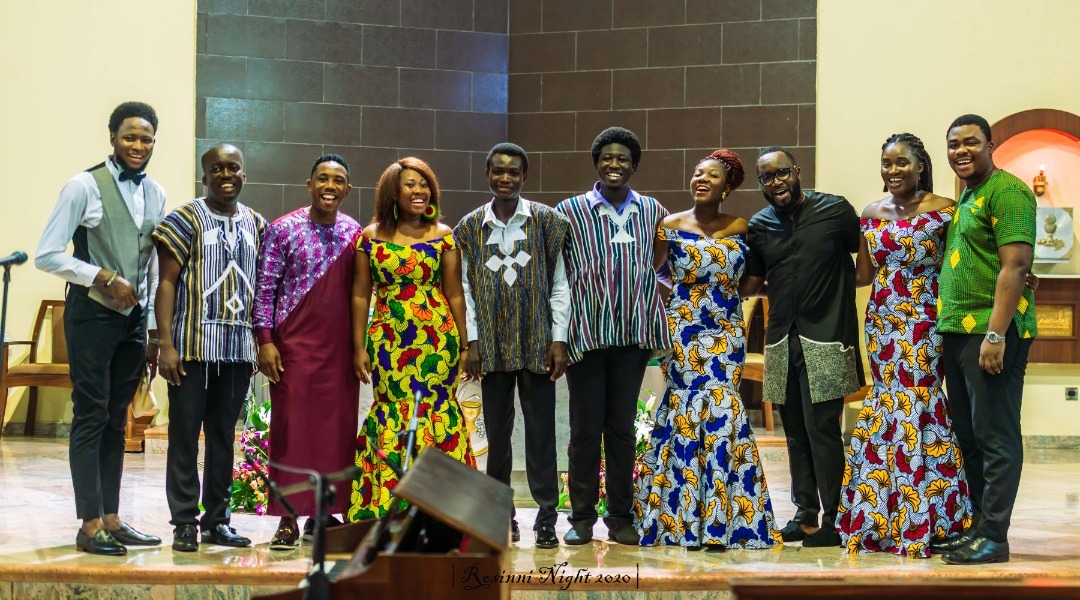 By the end of the year, the musical calendar had more-or-less resumed. November saw a celebration of the Italian operatic giant Gioachino Rossini in Accra, the largest such ever organised. It was put together by ‘Kelvin and Friends’, a cohort of singers and fans of classical music organised by Nigerian tenor soloist Kelvin Uhondo. The event saw operatic numbers and movements from his ‘Little Solemn Mass’ performed before a live audience at the Mary Mother of Good Counsel Catholic Church, accompanied by Kwaku Boakye-Frempong and Constant Ahadzivia on a piano, and the principal organist at the Holy Spirit Cathedral in Accra, Peter Twum-Barimah.

Trumpet pedagogue and retired performer, Hilarius Wuaku, teamed up with his students from the University of Ghana’s Music Department to host a live event titled “Hilarius Ghanaian Folk Tunes”, the latest edition of his annual public recitals featuring original works and arrangements. The event was live streamed by Choral Music Ghana.

One of the most significant choral events of the year, anticipated throughout 2020, finally came off as the year drew to a close. It was another pan-African choral event, this time hosted in Accra. The African Choral and Gospel Championship, ACGC, was launched at a weekend of activities held across multiple locations in the capital city. The annual event, which is competitive and celebratory in nature, is intended to be moved to a different African city each year. 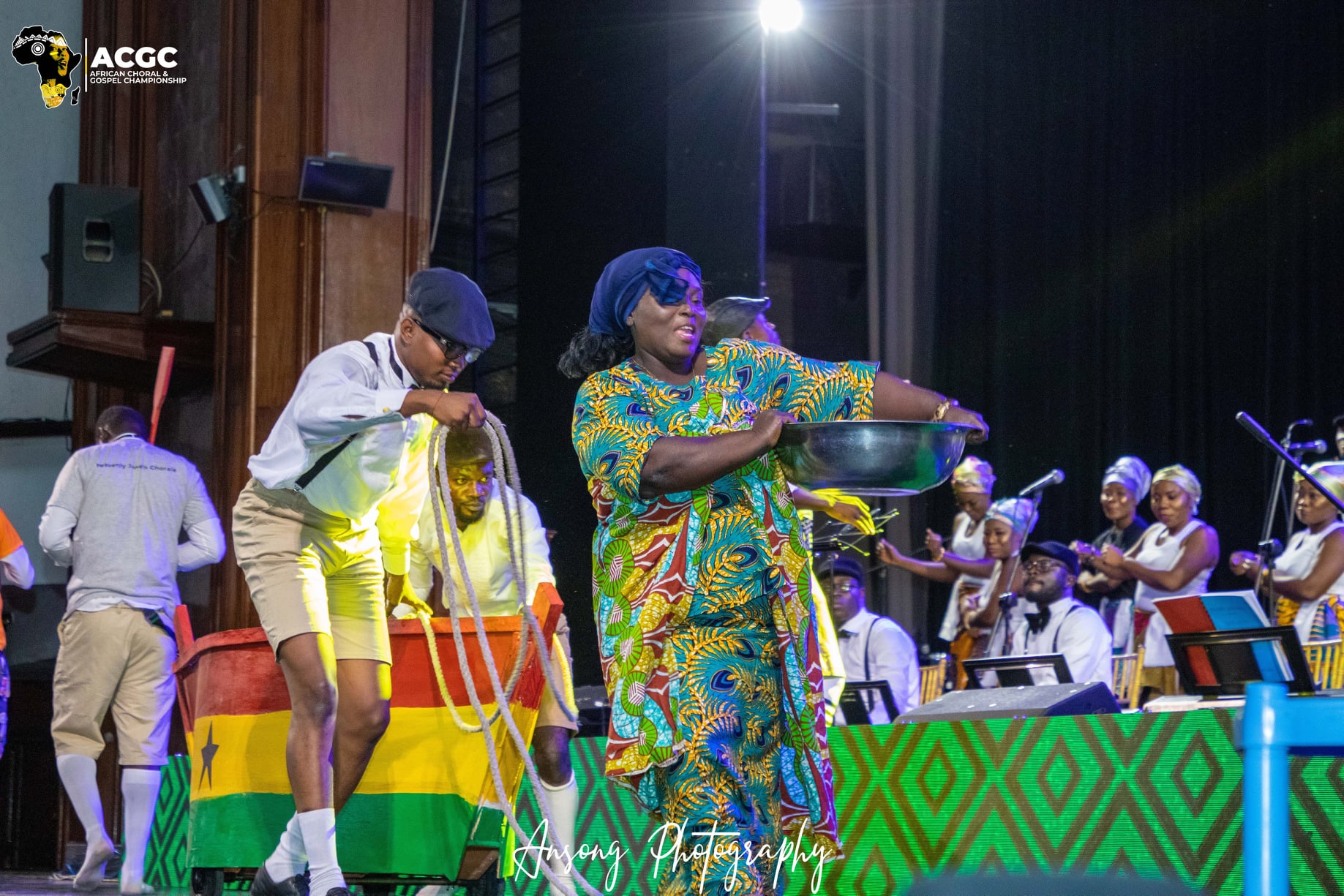 Several personalities from Ghana’s choral music scene, including the founder of host choir Harmonious Chorale, James Armaah, Michael Dingaan, his collaborator from South Africa, were involved in the ambitious project to bring musicians across the continent together to celebrate their art. The official launch concert was preceded by a masterclass for soloists hosted at Church Organs Ghana, and a workshop for choirs held at the Christ the King Parish Hall. Other personalities involved in the organisation’s activities included the founder/Executive Director of Lagos City Chorale, and the leader of Choeur de L’Unite from Togo. 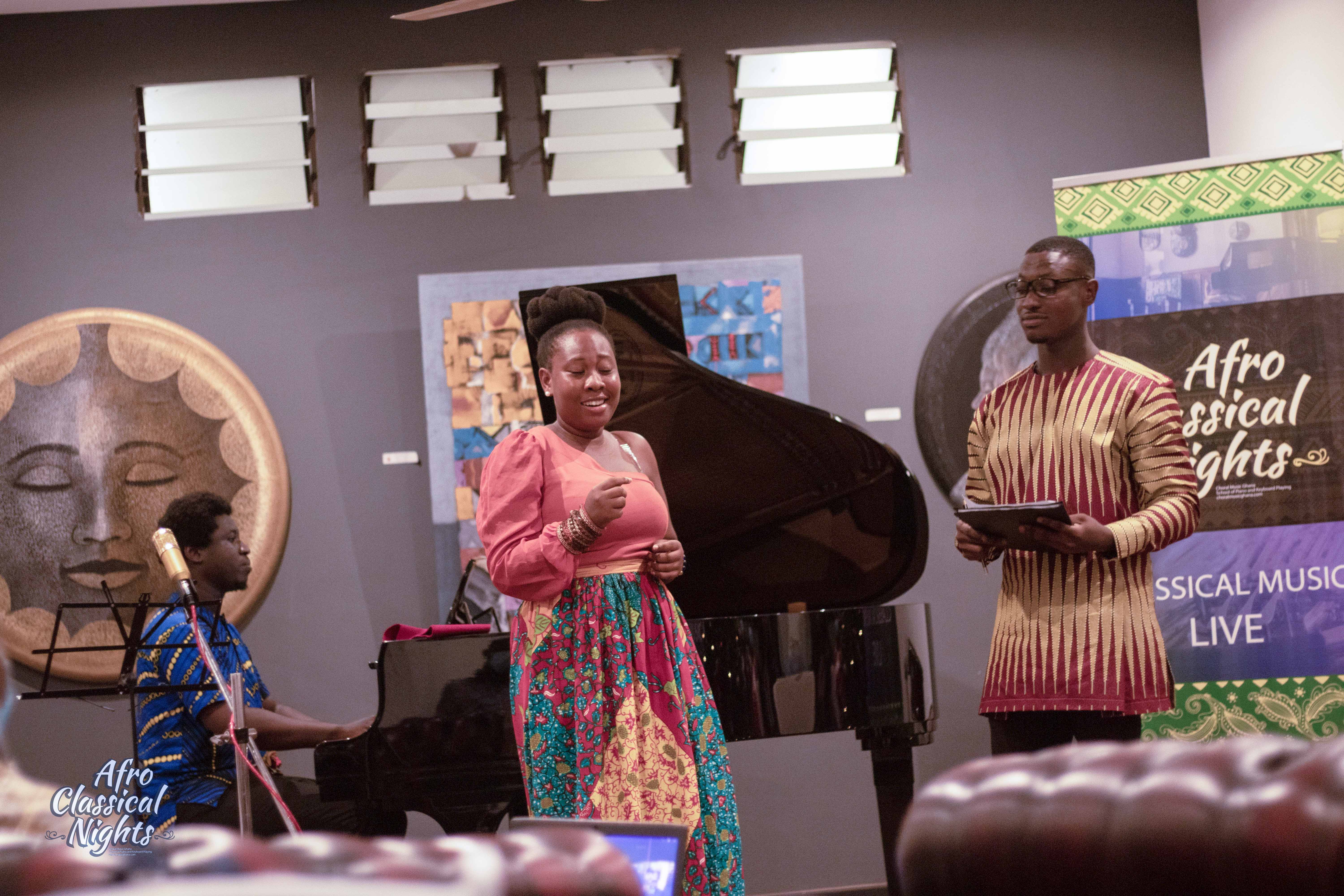 Choral Music Ghana crowned the year with a resumption of the Afro Classical Nights series. After the unprecedented hiatus, the recital was held at a new location - the Ghana Club. Afro Classical Nights, December 2020, saw pianist Kwaku Boakye-Frempong accompany several performers on a Kawai grand in the club house’s main hall and bar. The in-person event was also streamed live on Facebook.

The recital opened with two bassoon performances by Emmanuel Kotey of the National Symphony Orchestra, and continued with vocal works delivered by new discovery, mezzo-soprano Alberta Opata, and Kelvin Acheampong. 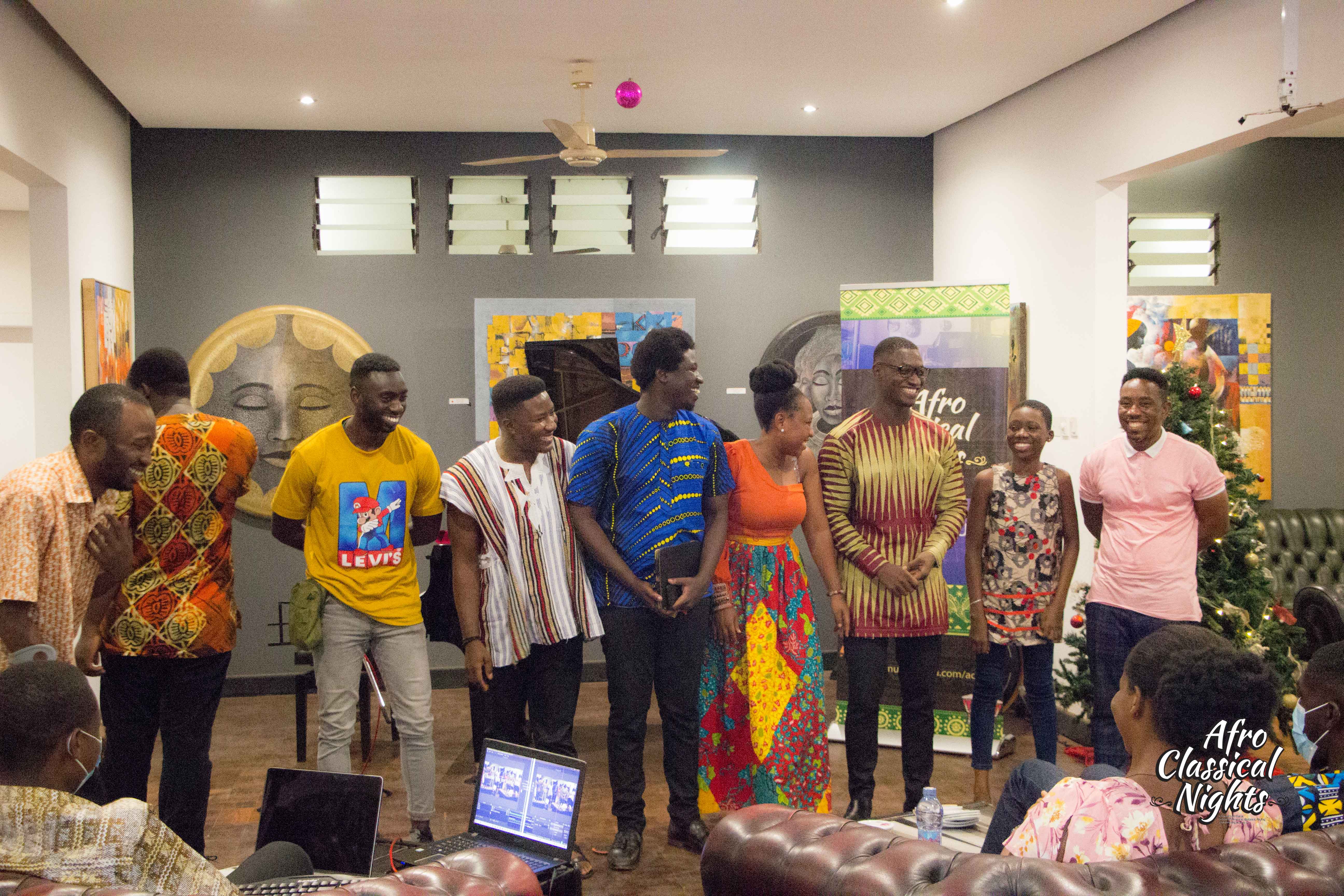 It’s been a weird, wonderful, wild and eventful year. The creativity of Ghana’s musical community continues to inspire us at Choral Music Ghana, as does the receptivity of audiences to new ways of experiencing the old.

Our big take-away was that the music never stops, even if the rest of the world does. Here’s to a happy and harmonious 2021!