It’s been about three weeks since Pax Choir KNUST organized a massive concert on the university campus, and we’re still feeling the vibes. The concert, a “local choralfest”, was dubbed Cantate Caeli, with the theme “One more reason to sing”. The aim of this concert was to showcase the works of Reverend Samuel Kojo Enninful and James Varrick Armaah. It was held at the Great Hall of the choir’s university, on the 18th of February, 2017.

With the choir’s impeccable reputation in the musical community and the immense publicity preceding the event, expectations from the audience were high.

Cantate Caeli started at about 6.30pm, 30 minutes after the advertised time. The choir was regal when they appeared on stage. I’ll admit, I have never before seen Pax Choir KNUST in such striking colours. The ladies wore long royal blue gowns with long silver earrings. The gentlemen looked smashing in similarly coloured suits with African print bowties and pocket squares. The keyboardists and choirmasters wore African print attires to match the gentlemen’s accessories.

As a former Pax chorister, I am aware of the choir’s mission as a “ministering group”. On this glamorous occasion, its higher calling was not lost. The opening prayer was accompanied by a hymn Fill Thou me, O Lord, a composition by Rev. Enninful. The opening of the concert defined the worshipful mood of the program.

The Chairperson was introduced, as well as other guests of honour and groups present. The chairperson gave his remarks and expectations for the program. Sister choirs were invited to join in the ministration: these included Pax Choir KATH, and the Pax Choir Alumni. Around this time, although the program was well underway, the hall was barely half-filled.

The first ministration was given by Pax Choir KATH, a small choir made up of medical, nursing students and other students in the health sector who are based at the Komfo Anokye Teaching Hospital. They ministered two hymns from Rev Enninful’s repertoire: his arrangement for the well-known Just As I Am, Without One Plea and another arrangement of a hymn, using the words from Hear us, O Lord, taken from the Methodist Hymn book.

That performance fell a little below expectation because the choir was barely audible in the large hall. The choir also performed Mo ne adwuma, a congratulatory song for our elders in the work they carry out. The song is supposed to be energetic, but it wasn’t performed as such. On speaking with the composer later on, he said he was grateful the choir ministered his songs, which were actually composed for a larger ensemble. Their last ministration was Yeda wase; a short anthem of thanksgiving that was introduced with a solo.

The MCs gave a short presentation on Rev Enninful’s musical background and a pre-recorded video interview was projected for the audience to watch. However, due to poor sound, a live interview was carried out with Rev Enniful on stage. The Reverend has been composing for over a decade, and has had over fifty completed works. His music, however, is not well known. During the interview, he gave the name of his favourite song, (which I do not recall) and sang a little portion of it. The crowd was ecstatic when they heard his rather remarkable voice. 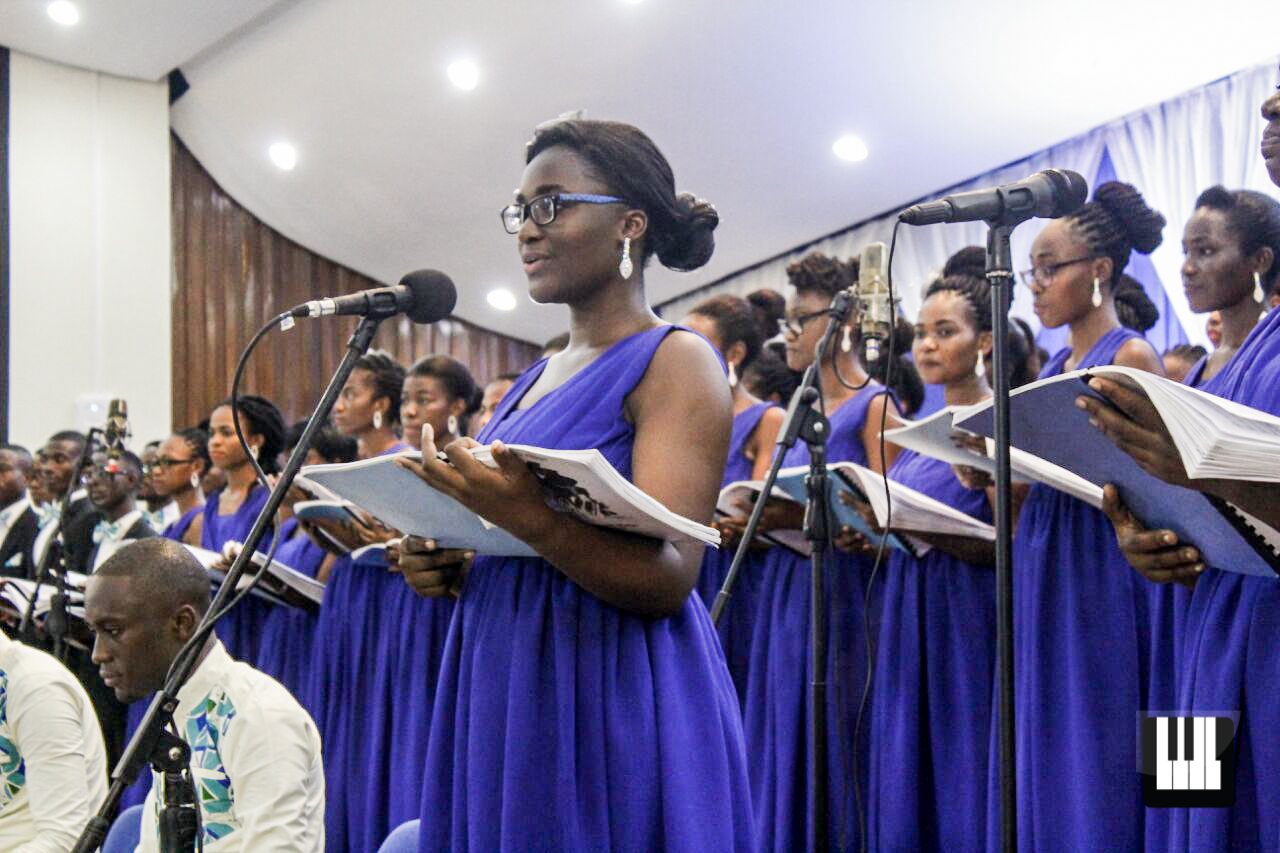 The host choir mounted the stage to perform selections from Rev. Enninful’s repertoire. Some pieces, like The Lords My Shepherd, Thy Way Not Mine, Siarfo Jesus, My God Is Love, were hymn-like. Two songs that stood out were Surely He’s Able and Prayer for Africa. The first has a distinct Negro-spiritual style, quite unlike anything we had heard all evening. Prayer for Africa is set to the music of Nkosi Sikelel’ iAfrika the national anthem of South Africa. Performed with a tuneful solo from Maureen Chizoba Uchuno, this piece proved a crowd favourite. It had me clapping for two minutes!

The organisers of Cantate Caeli employed a clever tactic to raise funds for the choir. They offered a list of songs from which the audience could request for after paying a token.

The “second” part of the program began with a live interview of James Varrick Armaah. He seemed rather shy coming up on stage. He was also asked about his musical background. The expression on his face suggested he had answered that question too many times before. One new fact came up that night from Armaah’s interview. We learned that James was taught to play the piano by Rev. Enninful. The Reverend was called upstage to share the moment with him.

The Pax Choir Alumni ensemble were next to minister. This group is made up of past students of KNUST who were also members of the choir during their school days. They performed popular titles from James Varrick Armaah’s repertoire. Among their selected pieces were You are God, Mensi Den and an ethereal performance of Eye Nyame N’adom, which was introduced with a soprano solo and a soprano-tenor duet. Watching the singers follow the dynamics of their conductor was breathtaking.

The host choir came back on stage to perform more songs by Armaah. The composer himself was involved this time, conducting the choir and playing the keyboard. They started with the prayerful Heavenly Father, a song of thanksgiving. This was followed by Ye Wo Nyame, Den na Onyame Ntumi Nye, I love the Lord, Aseda Nka Nyame and Come Thou Fount of Every Blessing.

After a procession of several solemn anthems, the choir led the audience into a frenzy of excitement with Woana Na Onye Wo Se and Anka Me Wo Hen. It felt as though the entire event had led up to this moment. 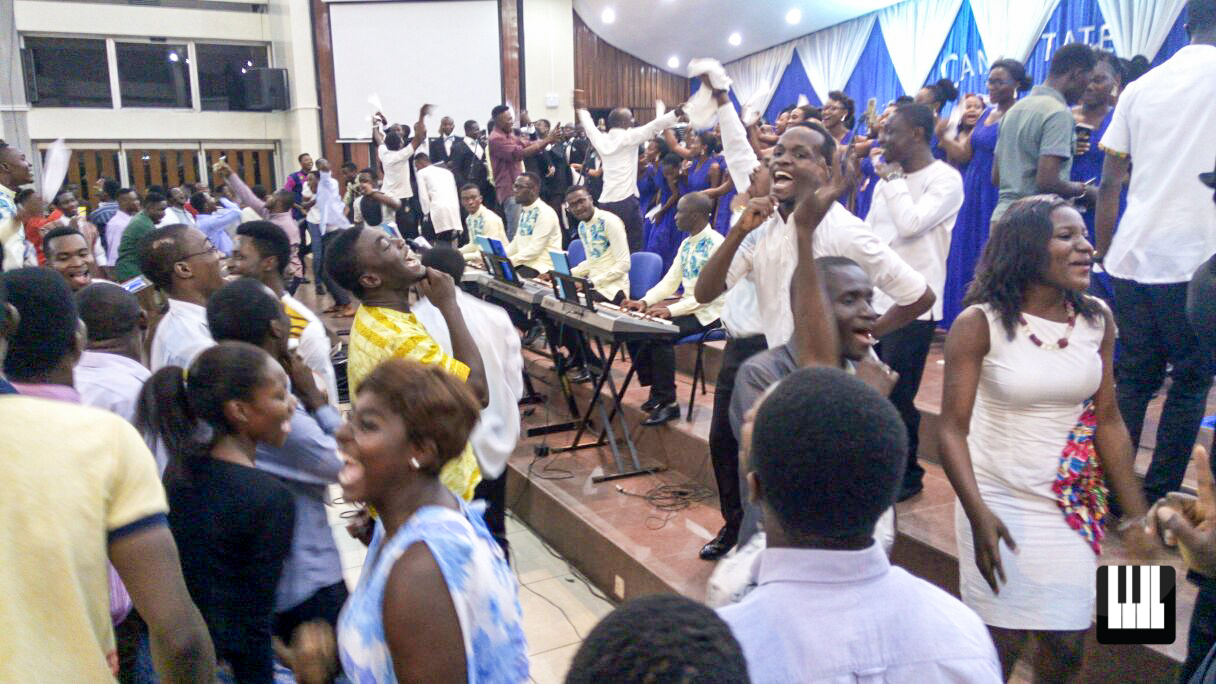 From then on, most of the audience enjoyed the music on their feet. At a point, the sound system went off, but no one seemed to notice. Or care. After the hiatus to deliver the closing remarks and prayer, the choir and audience resumed their dancing to popular hilifes.

Pax Choir KNUST did a lot that night to reaffirm their status as one of the best choirs in the country. Cantate Caeli saw the dazzling choir in spectacular performances led by one of the highest profile musicians active in Ghana. The concert was inclusive; we saw a larger number of soloists perform that night. The interviews were novel and somewhat revealing and the joy that saw the end of the program left me with the impression that this is already one of the best events of the year.