Look Back: Heaven, a Choral Concert with Harmonious Chorale

﻿Editor’s Note: This review is part of a series of “Look Backs” that are being published in recent weeks. Over the last several months, our team has worked on a number of concert reviews that have never been published.
Look Backs allow us to revisit these events and consider them with greater insight, while allowing our readers to relive those moments long after they have experienced them.
Among the major highlights for choral music lovers this year was Harmonious Chorale's "Triad", three major concerts on their 2018 calendar. In the run up to the second of this series, we consider "Heaven, a Choral Concert", shed the light on some of our favourite things about James Armaah, and hint at what we would like to see from the upcoming "Mixed Oratorio".

The first concert in Harmonious Chorale’s triad - Heaven - was held on the 10th of June at the International Conference Center in Accra. The triad, a series of three major concerts by Ghana’s most celebrated choir represents the high points of their 2018 calendar.

The theme for the choral concert was a focus on the Christian view of the triumphant afterlife: the promise not only of rest but eternal joy, expressed through song, mime and prose narrative.

As with all things Harmonious, our expectations of all aspects of the performance, both musical and non-musical, were very high. It is worth noting that aside the quality of voices produced by the choir, Harmonious Chorale seems to bring refinement in other areas of organisation that contribute to an exceptional experience at their biggest events.

The first taste of what was on offer at Heaven was a short organ recital by a young, New York-based Ghanaian performer; Samuel Kuffuor-Afriyie. 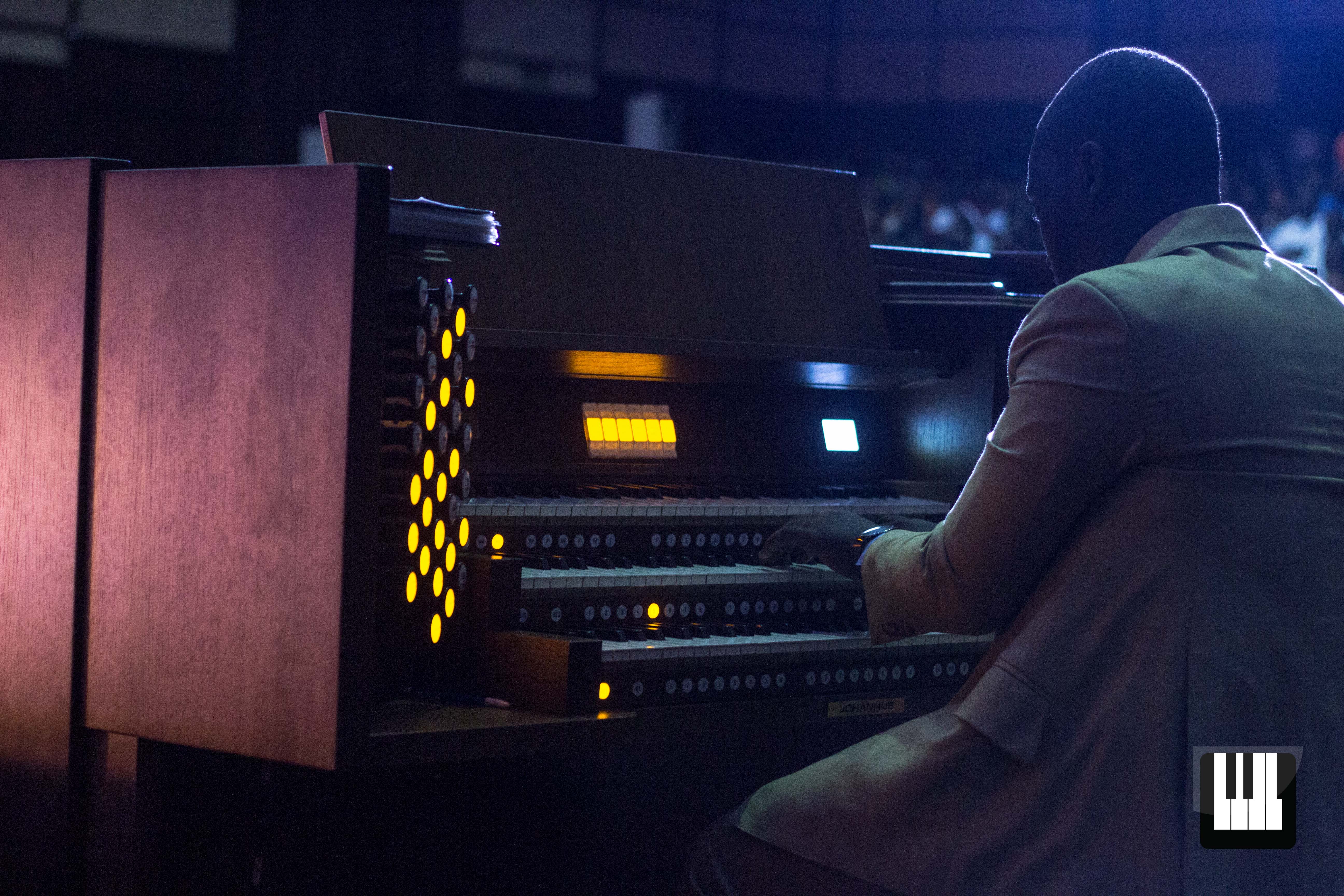 Samuel’s brilliant organ solos played a “curtain raiser” role, and felt only secondary to the main choral act which followed after the short introduction by the MC, Sammy Abaka Jnr, and the introductory narrative by the voice of Dr. Samuel Koranteng-Pipim.

Consistent with the theme of the concert, the choir was dressed in white with traces of gold, matching the stage floor and props. Sharing the stage with the choir, standing to the far right of the stage was a band of uniformed drummers.

The first song performed by the choir was Peter Wilhousky’s arrangement of the “Battle Hymn of the Republic”. Accompanying the choir were, besides four keyboards, two trumpeters and the drummers and a cymbalist. This seemed to us to be a bolder expression of Varrick’s apparent interest in incorporating diverse musicianship into his performances. We have previously noted the lone trumpeter accompanying the choir in past events. The inclusion of the extra brass and dedicated percussion in this performance was, in our estimation, a respectful nod to the martial spirit of this hymn, and a relevant step towards authenticity. The small troop of marching children with white halos round their heads did not add much to this. 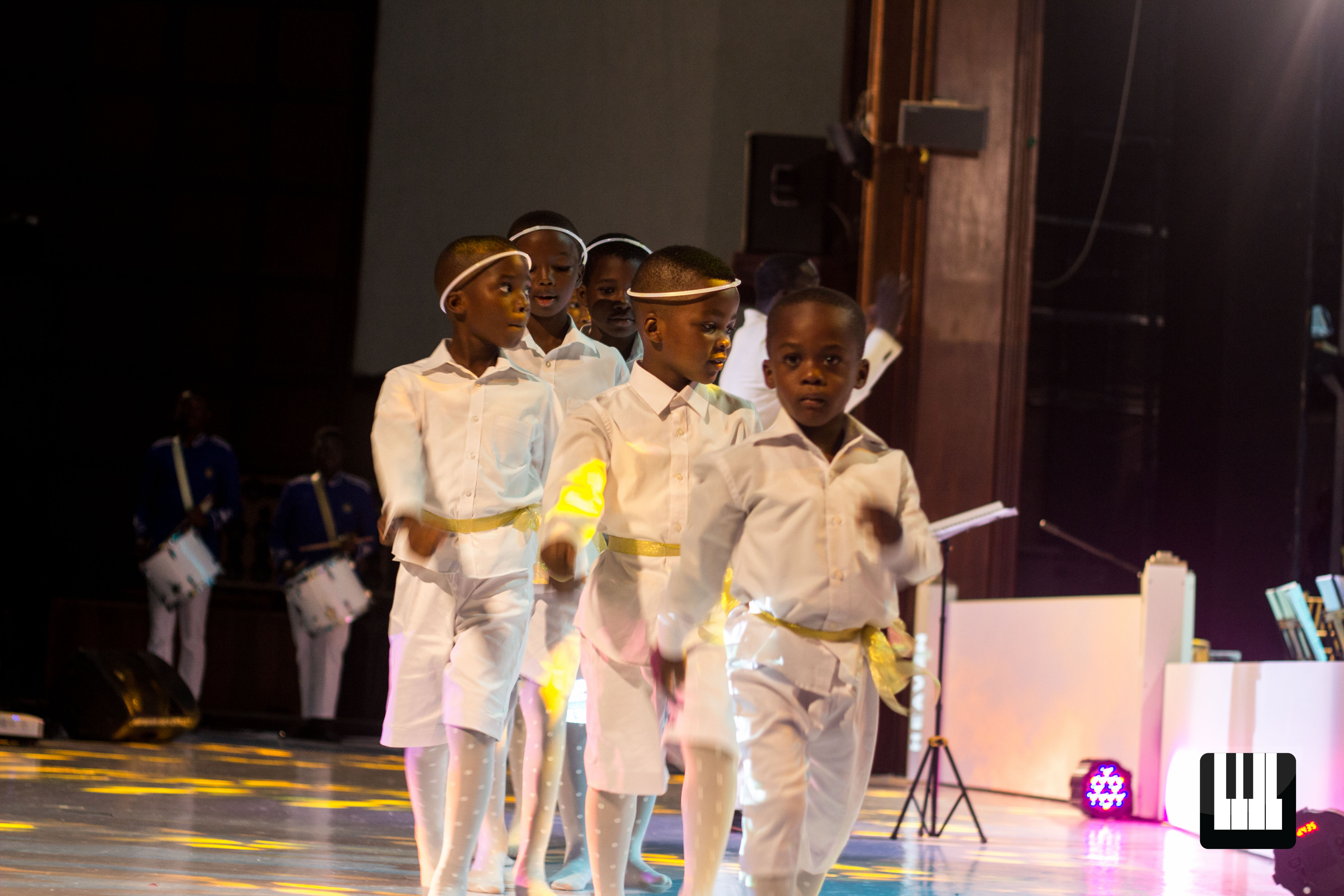 Right after this, the music switched moods to the solemn opening lines of JH Maunder’s “On the Way to Jerusalem”, the first chorus from his “Olivet to Calvary”. With the new music, the band and marching children were replaced with palm-frond waving actors sweeping across the stage in flowing garments, welcoming Christ to Jerusalem. Christ did show up after a short while, leading a donkey into the auditorium while the music was being performed.

Samuel Koranteng-Pipim resumed his voice-over narrative, after which a rather upbeat hymn, “Din Bi Wo Ho A Eye De”, written by Apostle Anderson to the tune of “‘Tis so Sweet to Trust in Jesus” was performed, ending the first of nine segments.

The second segment focused on the passion of Christ. This was opened by Samuel Twum-Barimah singing Armaah's "Debonyeni" with the composer accompanying on a keyboard. The eventual resurrection of Christ was marked by two works, Handel’s “See, the Conq’uring Hero Comes”, and Sekyi Baidoo’s “W’asore afi awufo mu”.

With these two triumphant songs, the three-act story central to Christianity had already been played out within the first three segments of the concert, and with them, most of the drama of that narrative was exhausted. The other six parts were left for the audience, led by the choir, to ruminate over Heaven. We could argue that “Heaven, the Choral Concert” had finally started.

The fourth segment opened with the promise of Heaven inspired by the words of Christ as recorded in the gospel of John, set to music by HA Clark in “Let Not Your Heart Be Troubled”. Lordina Eugenia Osei echoed this same sentiment when she took up the second song of this segment, Alfred Addaquay’s “Mma mo akoma entutu”.

Following this, the voice-overs became more emphatically preachy, and the narrative coherence of the beginning of the concert now more or less completely replaced with explorations of various themes reflecting some aspect of Heaven. Among the pieces performed were Newlove Annan’s “Wobohye”, and JB Coats’ “Where Could I Go”. The latter presented a remarkably refreshing change in style, away from the statelier Annan anthem to the distinctly Southern US gospel style, complete with organ embellishment, brass accompaniment from a muted trumpet and extempore lead singing from Joel Aidoo and Edward Opare-Addo. 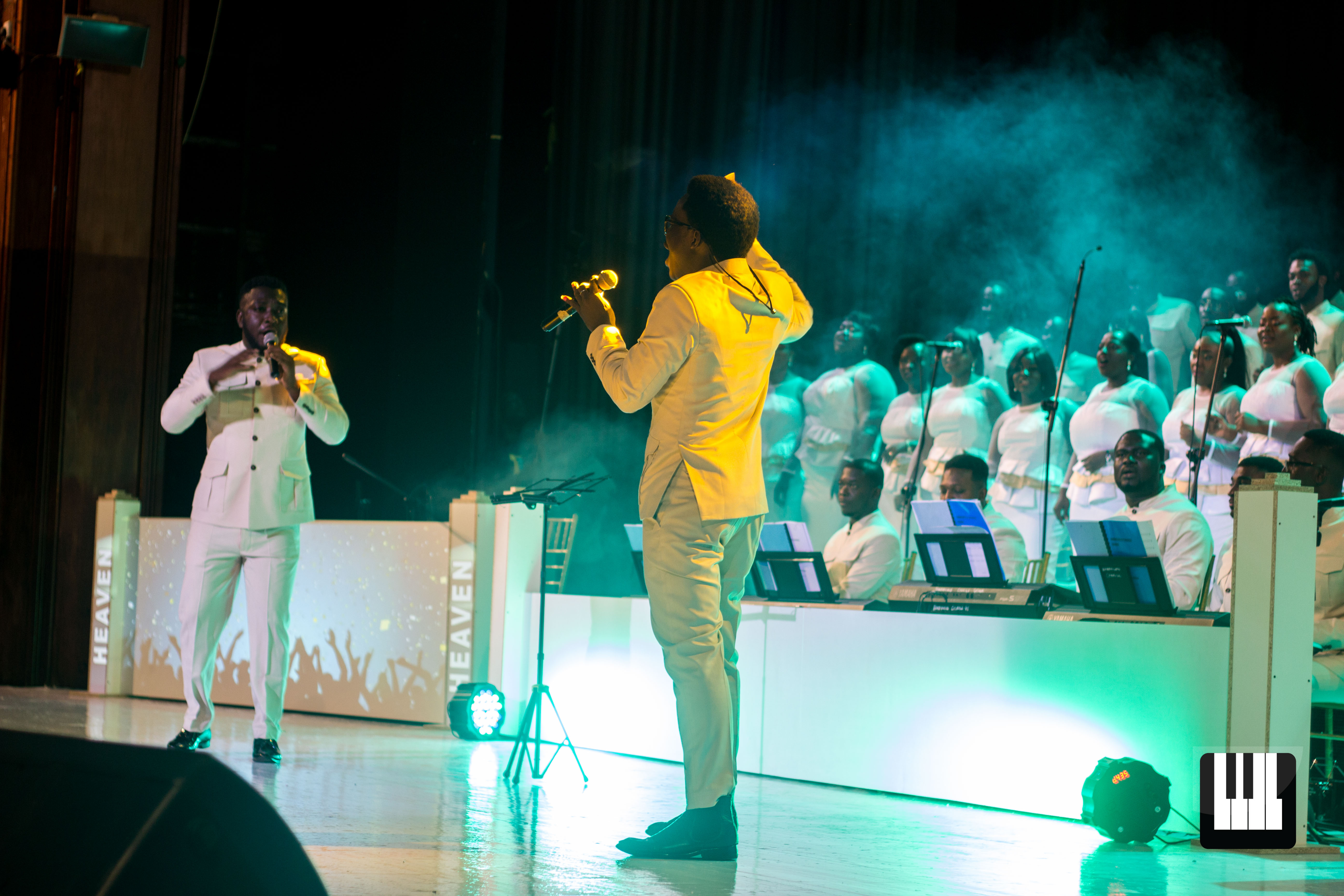 Other songs performed included “In God’s Land” by George Mensah Essilfie, an arrangement of Edward Vaughan’s “Heaven is the Prize” for solo and chorus, and “When we all get to Heaven”, which saw the band return to add a marching rhythm to the latter verses of that hymn.

Little children dressed as angels joined the performers on stage as Kennedy Dankwah led the choir in singing Stephen Adam’s “Holy City”. After an antique chair was lowered unto the stage to rest under a golden spotlight behind the choir, Joseph Quaynor opened with the solo that begins Fred Peace’s long and dramatic “And I Saw a New Heaven”. The seventh segment of the choral concert ended with John Stainer’s “What are these?”

The eighth segment presented one last opportunity for drama, as the focus of the reflection on Heaven finally brought us “before the Throne of God”. The lights were dimmed on stage and through the darkness, Pipim explored what this experience must be like. When the lights came back on, the choir sang two triumphant anthems, “All Hail the Power of Jesu’s Name” and Handel’s Hallelujah Chorus, while a hooded rider on a white horse paced before the audience under a spotlight.

With the quality of musicianship they show, it is sometimes easy to forget that Harmonious Chorale is, fundamentally, a Christian music ministry. The lengthy exposition of the theme, delivered by Samuel Koranteng-Pipim in person, on stage, spoke to that fact. After all, the choral concert titled "Heaven" was meant as a way for the choir to bring to the fore - using music - this aspect of Christian theology. Dr. Pipim’s lecture summarised all that we had heard, seen and felt in what turned out to be a pretty exhaustive sermon on the subject. 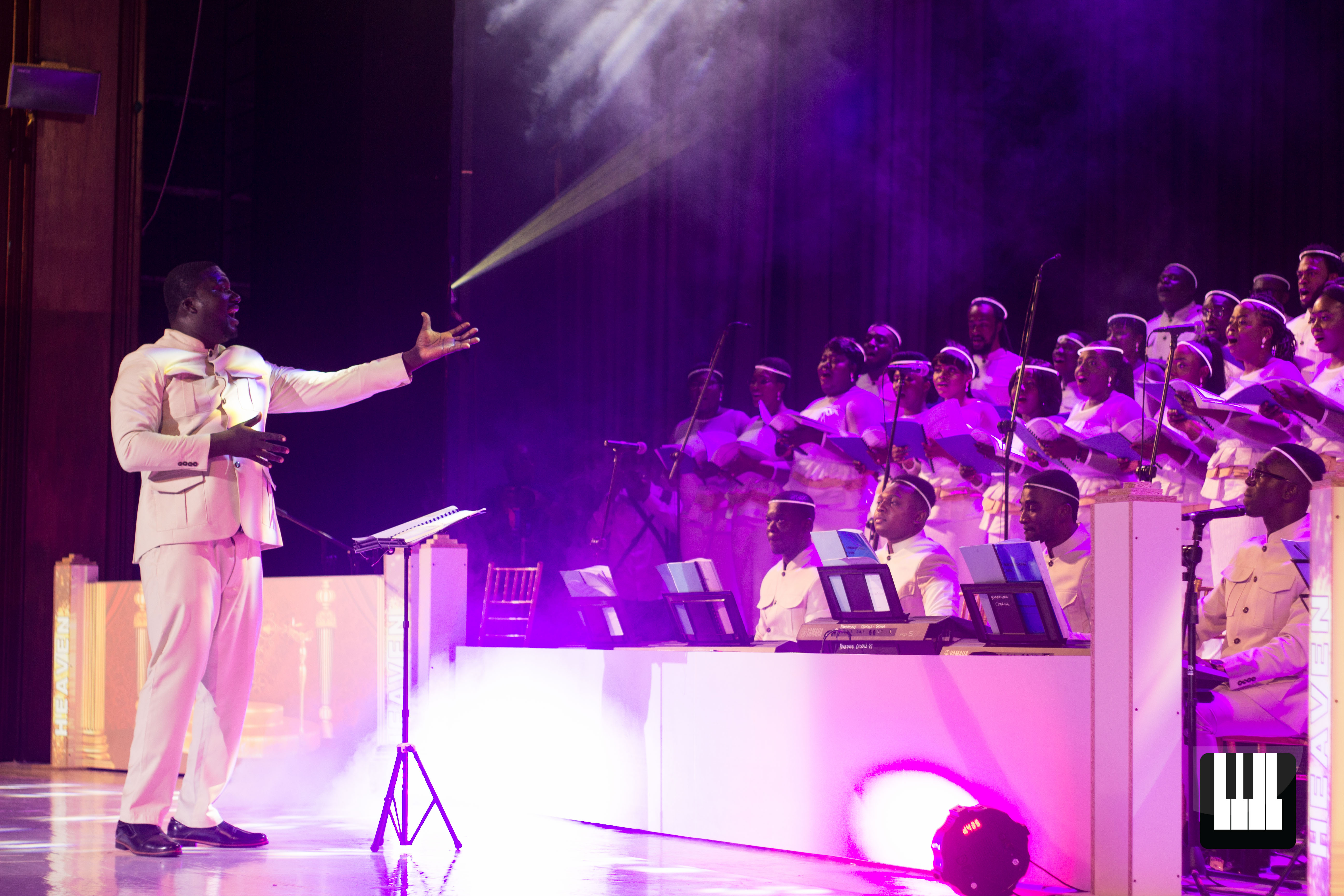 As we have mentioned before, the appeal of Harmonious Chorale seems to extend beyond music. The execution of the idea of a choral concert about Heaven was, relatively speaking, quite extraordinarily well done. Despite the limited opportunities such a theme presents for engaging stagecraft in a choral setting (as was evident in the apparent stasis in the middle of the three-hour event), there was enough to keep the excitement of the entire performance alive.

The second concert in this year’s Triad, the “Mixed Oratorio”, is an exciting prospect for us. From what we have gleaned from the choir’s external communication, the best of four complete oratorio performances will be presented in concert. Our expectations are extraordinarily high, seeing the potential of James Armaah’s artistic vision and his tendency towards pomp and ceremony.

If our experiences in past Harmonious Chorale events are worth leaning on, and considering what we witnessed with the most recent of these oratorios being revisited, there is a chance that the choir may pull off another elaborate display. It will not be out of character.

As with all things Harmonious, the final segment of the concert featured a lengthy highlife session that must have satisfied those who came to the show to dance.