Bethel Symphonic Choir, Asokore Methodist Church, organised a concert dubbed “Jehovah’s Praise 2017” which was to be held on the last Sunday of 2017. The event had to be postponed to the first Sunday of 2018 because of an All Night Service at the church.
The choir was conducted by Isaac Adjei Bamfo and accompanied by Augustine Sobeng and Magnus Kwaku Akyeampong, both on electronic keyboards. Jehovah’s Praise was mainly attended by members of the Methodist Church in neighbouring circuits, and the two invited choirs – The Evangel Choir and the Koforidua Youth Choir.

When I arrived at the Asokore Methodist Church in Koforidua at 2pm, I was received warmly by two executives of the Bethel Symphonic Choir – Godfred Bentil, the Coordinator and Emmanuel Agyeman-Duah, the choir's Secretary.

About an hour to the start of the programme, it began to rain and the streets quickly emptied. The unexpected Harmattan rain dampened the moods of the executives who expected it to impact the programme’s start and attendance.

They were right about the former: the rain stopped around 5:30pm, allowing the sound engineer to arrive and set up in the chapel. There were two keyboardists doing touch up rehearsals. I was surprised to find Augustine Sobeng - the principal organist of Harmonious Chorale and one of Ghana's most sought-after keyboardists - present. By 6pm, only three guests were seated. The choristers looked anxious. After about forty-five minutes, as if on cue, more than fifty guests arrived.

While we waited for the concert to begin, Augustine played through several jazz variations of “Great is Thy Faithfulness”. The program commenced at exactly 7:00pm. By this time, the chapel was almost full and the ushers had to send some of the guests to the upper gallery. The MC, Mr. Acheampong Kingsley invited Madam Agnes Yankyira to take the opening prayer. After leading the audience in worship songs and saying a prayer, we sang the hymn, “Thee will I Praise with my Heart”, Methodist Hymn 80. This was led by Kenneth Asimeng Darkwahene, a keyboardist with the Evangel Choir.

The church’s gospel band was invited to lead the audience in a praise and worship session. After ten minutes, the chairperson, Mr. William Akuoko Gyapong, a member (and patron) of the host choir, was introduced. Other dignitaries that graced the programme included Doris Belinda Arkorful, CEO of Linda Dor Restaurant and her Finance Controller, Gertrude Arkhurst, Hon. Dr. Edward Asante Antwi, Head of Administration, Koforidua Technical University, Assemblyman for Aburodua-Asokore and the Secretary for the NPP New Juaben North constituency and Very Rev. Isaac Kwadwo Yeboah, the Superintendent Minister of Asokore Circuit, Methodist Church Ghana.

Both Linda Dor executives are patrons of Bethel Symphonic.

After these introductions, the Evangel Choir’s first performance was delayed due to a technical issue on stage. The Chairperson was called to give his welcome address while this was sorted out. 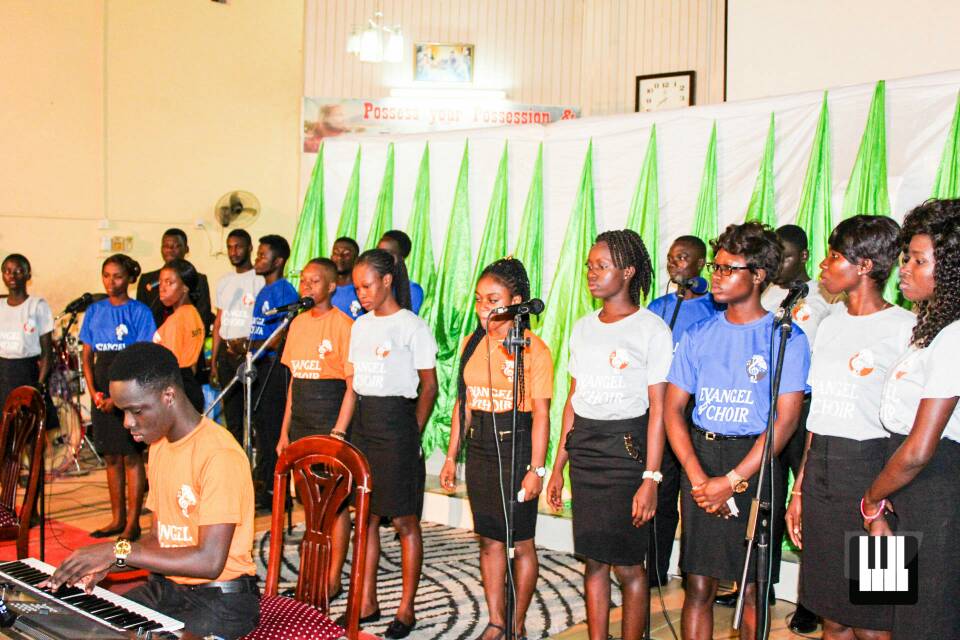 Accompanied by Antwi Ofori Moses and Kenneth Asimeng Darkwahene, the Evangel Choir sang “Ma Menkɔ da me Nyame Ase” by Y.O. Asiamah and “Jesus ye Mawo so” by Osei Boateng. They were conducted by Emmanuel Appau Horatio, the music director of the Evangel Choir.

Finally, the host choir, the Bethel Symphonic Choir, took to the stage to a standing ovation from everyone in the chapel. Augustine Sobeng and their conductor, Isaac Adjei Bamfo joined them on the stage. The delight and surprise from the audience at the sight of Augustine was noticeable.

The choir sang “Yensi dɛn kanfo wo” by Newlove Annan, “Come Thou Fount of Every Blessing” by James Varrick Armaah, “Achieved is Thy Glorious Work” from Joseph Haydn’s “The Creation”, and the “Battle Hymn of the Republic" by William Steffe. That final anthem was the last and best performance of the first part of the night. 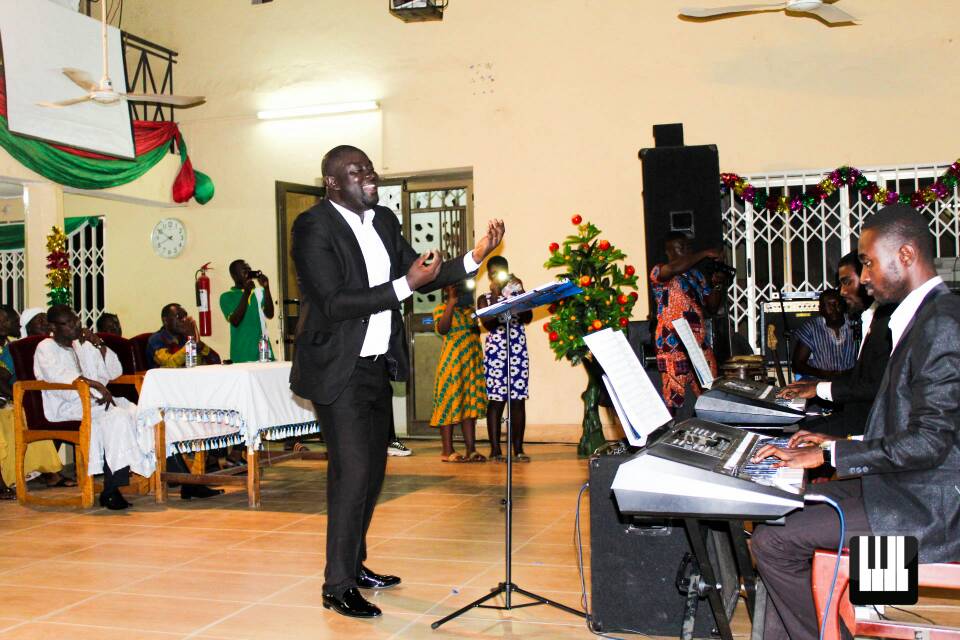 When the choir took their seats, the audience sang Methodist Hymn 896, “Now Praise we Great and Famous Men”. After the hymn, Very Rev. Isaac Yeboah was invited to deliver an exhortation and lead an appeal for funds. His message highlighted the small beginnings of the choir and the significant height they have recently achieved. During his sermon, he called them “the light of their church”.

After the fundraising, the Koforidua Youth Choir took the stage. They first performed two Ghanaian anthems, Newlove Annan’s “Odomankoma” and Augustine Sobeng's arrangement of “Siya hamba”, under the baton of Professor Ben Quaye . They followed this with a highlife medley that included “Bebia Wo de M’abeduru ni” by James Varrick Armaah and “Aseda Nwom” by Sam Asare Bediako. This was led by Ransford Lartey. 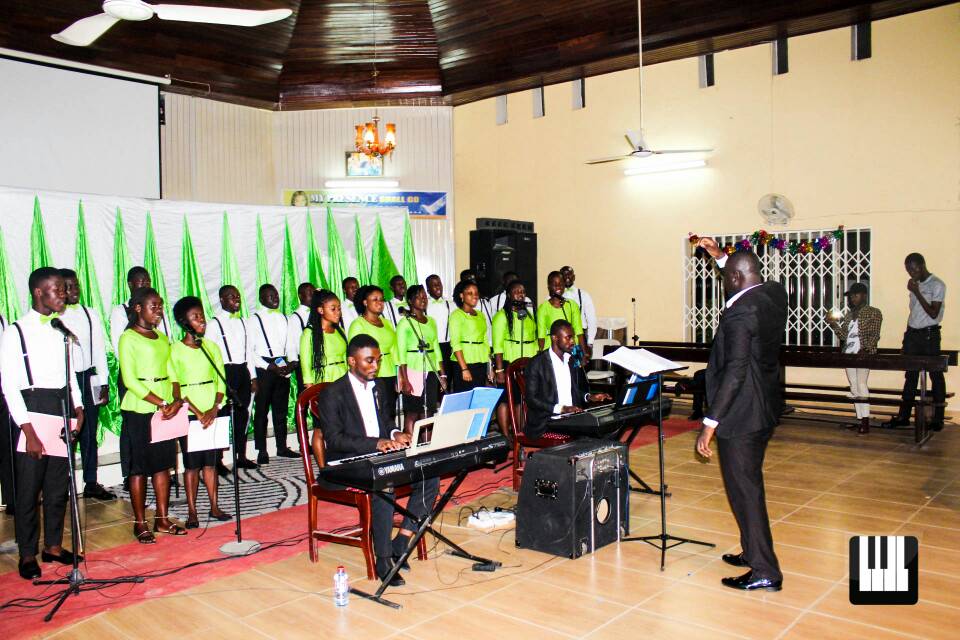 After their performance, the Bethel Symphonic Choir was called again to climax the concert. They sang some worship songs arranged for four parts by George Mensah Essilfie with a tenor solo by Dominic Acquah. They also performed the popular “What shall I do?” by J. V. Armaah, “And shall Your Light” by Felix Mendelssohn and a highlife medley. They ended this with James Armaah’s legendary “Oye”.

After Very Rev. Isaac Yeboah gave the benediction, all three choirs took the stage to sing the “Hallelujah Chorus” from Handel’s “The Messiah”, ending the concert. The choir master, Seth Bentil was overjoyed to see the chapel filled, despite the unexpected rain just hours earlier. He promised a mega concert on the last Sunday of this year.