Joseph and His Brethren

On the 2nd of July, 2017, James Varrick Armaah’s Harmonious Chorale made history by being the first choir in Africa to perform Handel’s Joseph and His Brethren. The sacred oratorio, since its completion and first performance in 1744, seems to have slipped through the cracks into obscurity, placing it among the least known and performed oratorios of the composer who popularised this genre in England.

Varrick’s choice of this unknown large-scale composition gave us a chance to test our taste for novelty in a number of ways. The simple fact of staging an unfamiliar work allowed the audience to engage with “fresh” Baroque music, an occurrence that is not too common in an environment dominated by perennial favourites like the Messiah, and by new original works from local composers in our own distinct expression.

Aside this, audiences were faced with a form that hasn’t seen much appreciation in the contemporary Ghanaian art music experience: drama in music. Quite unlike Handel’s other popular sacred oratorios regularly performed in the country which “tell some Biblical story” through a sequence of arias, recitatives and choruses, the narrative of Joseph and His Brethren is “acted” by the singers on stage. The work is closer to an opera than what we’ve come to expect of the oratorio.

Last year in July, when the Accra Symphony Orchestra dazzled us with Accra Goes to the Opera, we wondered aloud if the Ghanaian audience had the interest and capacity to enjoy a full scale operatic production. Last two weeks, we had our answer.

Aside these novelties, this concert also anchored itself firmly on some safe bets: the production of another Handel oratorio, however obscure, is going to be more relatable than, say, a similar work from a composer of another period. Being a sacred work also placed this firmly in the context of the concert-goer’s experience of art music as just another dimension of their own Christian faith. Indeed, the focus of conversation around this performance seemed to lean heavily on the Christian “ministration” it offered; the moral of the story and the spirit of worshipful dedication of the best of human art to God; the sort of thinking that must have also characterised a lot of that period’s music. Also, and perhaps most important to the majority of the audience, this was another major Harmonious Chorale event. It being their 10th anniversary increased the importance of the occasion.

The event started an hour before the stated time with a panel discussion that was announced only the day before. The auditorium at the International Conference Centre was almost filled to its capacity before the opening prayer was said by Rev. Fr. Andrew Campbell.

After Dr. Joyce Aryee welcomed the audience to the auditorium, the curtain was raised and history was made in Accra. 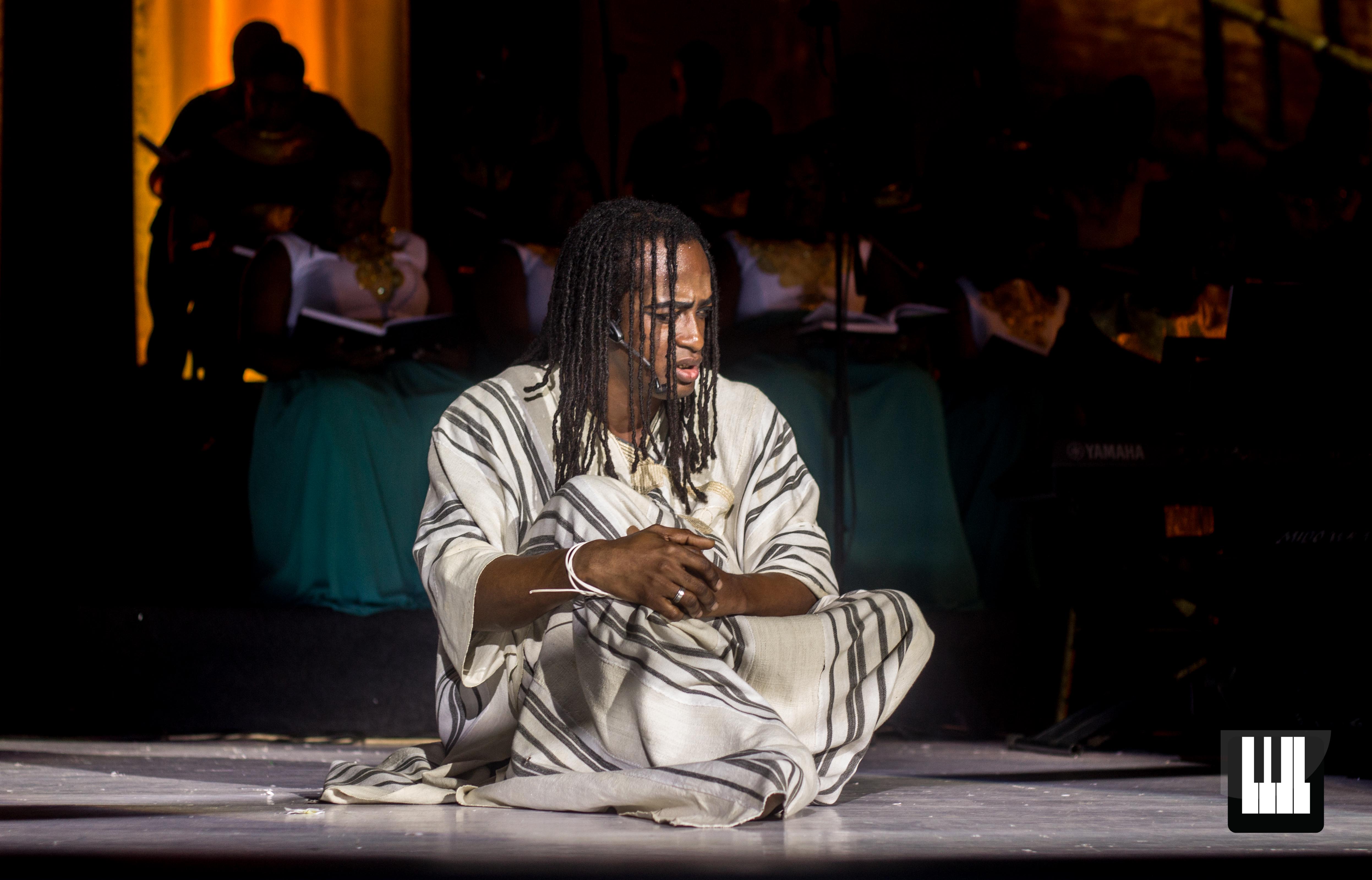 The overture to Joseph and his Brethren follows a form1 employed by Handel in his other similar works. It is divided into three sections: a slow opening, a fast, fugal middle section and a slow closing section that mostly repeats the first part. Following the overture, the first scene of Act One seems to carry much of the spirit of the opening. Joseph is alone, on stage, in chains. His aria is a long, drawn out lament that only really shows signs of life when a charismatic Phanor, played by Joel Aidoo, remembers his old cellmate at a time of turmoil in the heart of the ruler of Egypt.

Even in lament, Aidoo’s acting and singing shows more life and character than the hero of the story does.

The first act takes us through the highest levels of power in the Egyptian court. Joseph is summoned to explain Pharaoh's dream, and is rewarded with a Prime Ministership. Samuel Twum-Barima is cast as the Egyptian ruler. The bass soloist and alumnus of the University Choir KNUST is not new to dramatic roles in large scale productions. He has previously starred as Raphael in the Joint Choir KNUST’s performance of Haydn’s The Creation. During that event, Samuel’s arias were notable for his dramatic interpretation of the text and music. The stocky soloist seemed to carry that spirit with him into this performance, giving Pharaoh a jovial and confident character. 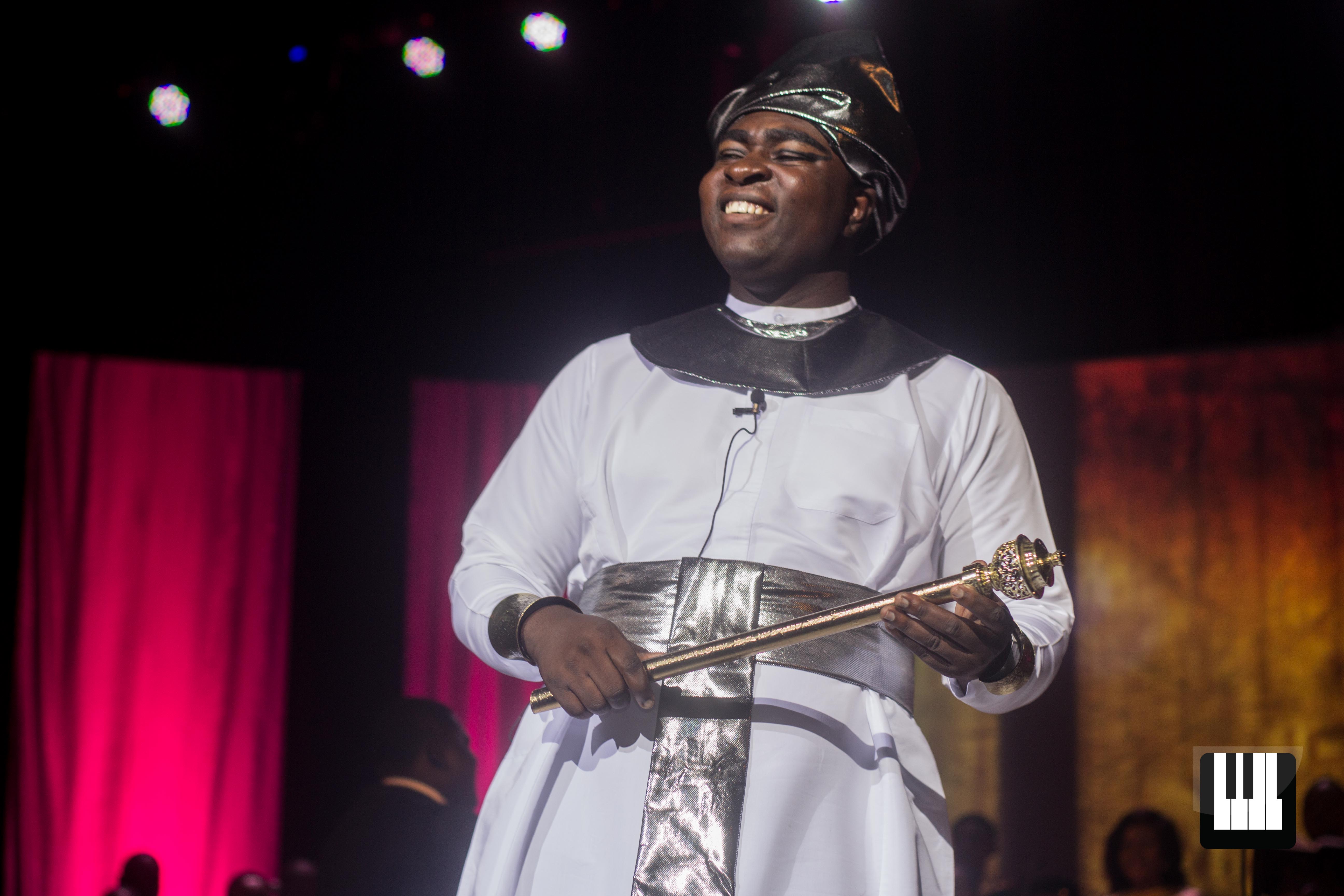 The love interest, an invention of the librettist, is introduced after Joseph has risen to prominence. She is Asenath, the daughter of the High Priest, played by Lordina Eugenia Osei. Following her aria about the love she felt for Joseph, her duet with the hero of the story effectively communicated the brewing romance between the two. 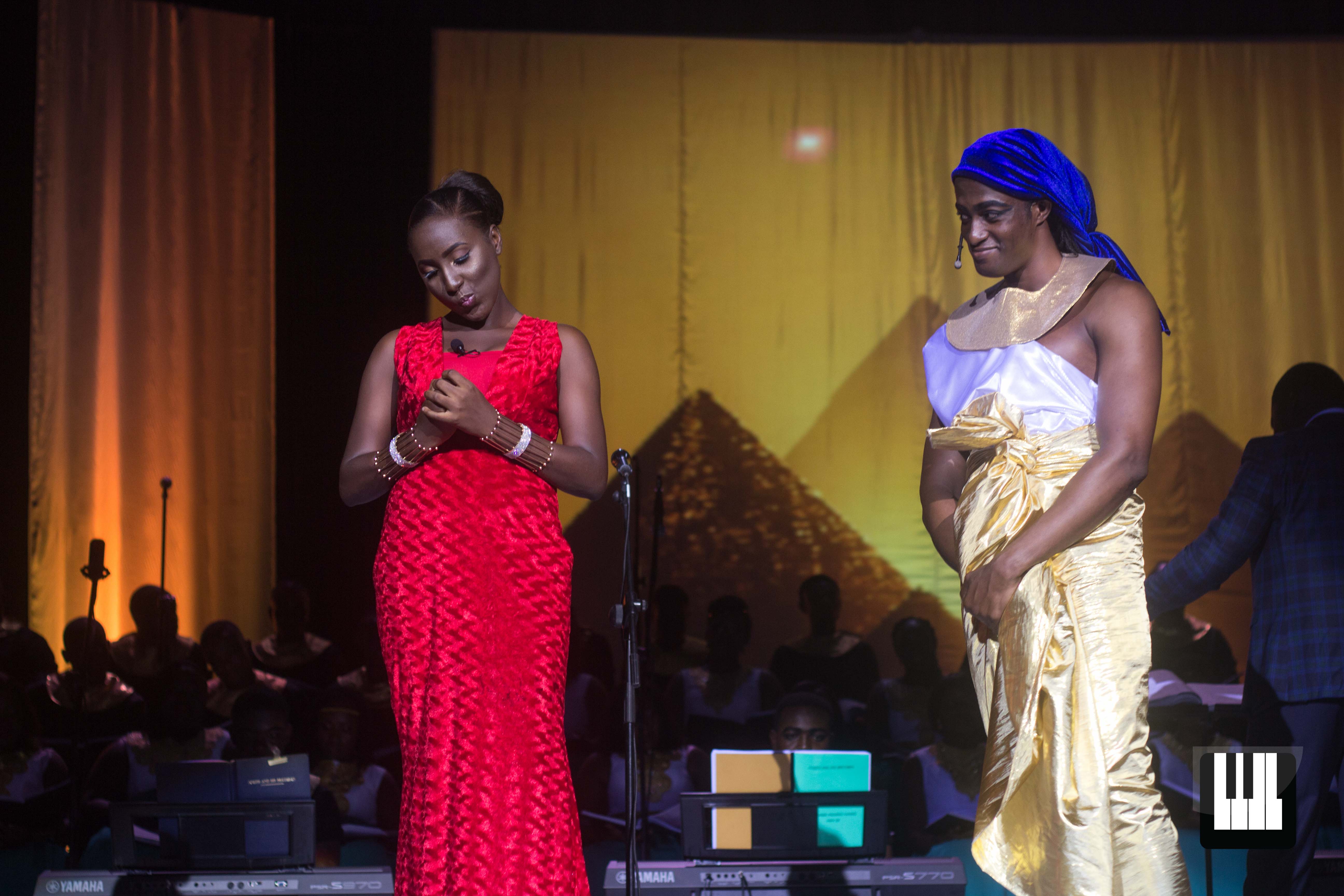 Lordina’s potential for acting out her character seemed great. As the daughter of the High Priest in love with her Prime Minister, she was dreamy when singing of her love alone, and endearingly coy when in the presence of the imposing Joseph. Although there was an obvious lack of exaggerated motion on the part of Lordina and the other characters in Act 1, those who were closer to the stage definitely had more opportunity to read the nuances of the expressions and body language of the actors on the stage. And at close range, they acted quite brilliantly.

There was some unexpected comic relief in Scene 6, during the wedding ceremony, where the High Priest, played by Edward Owia Opare (who doubled as Potiphera) delighted the audience with his unorthodox tribal antics and mimed admonitions to Joseph and his new wife. 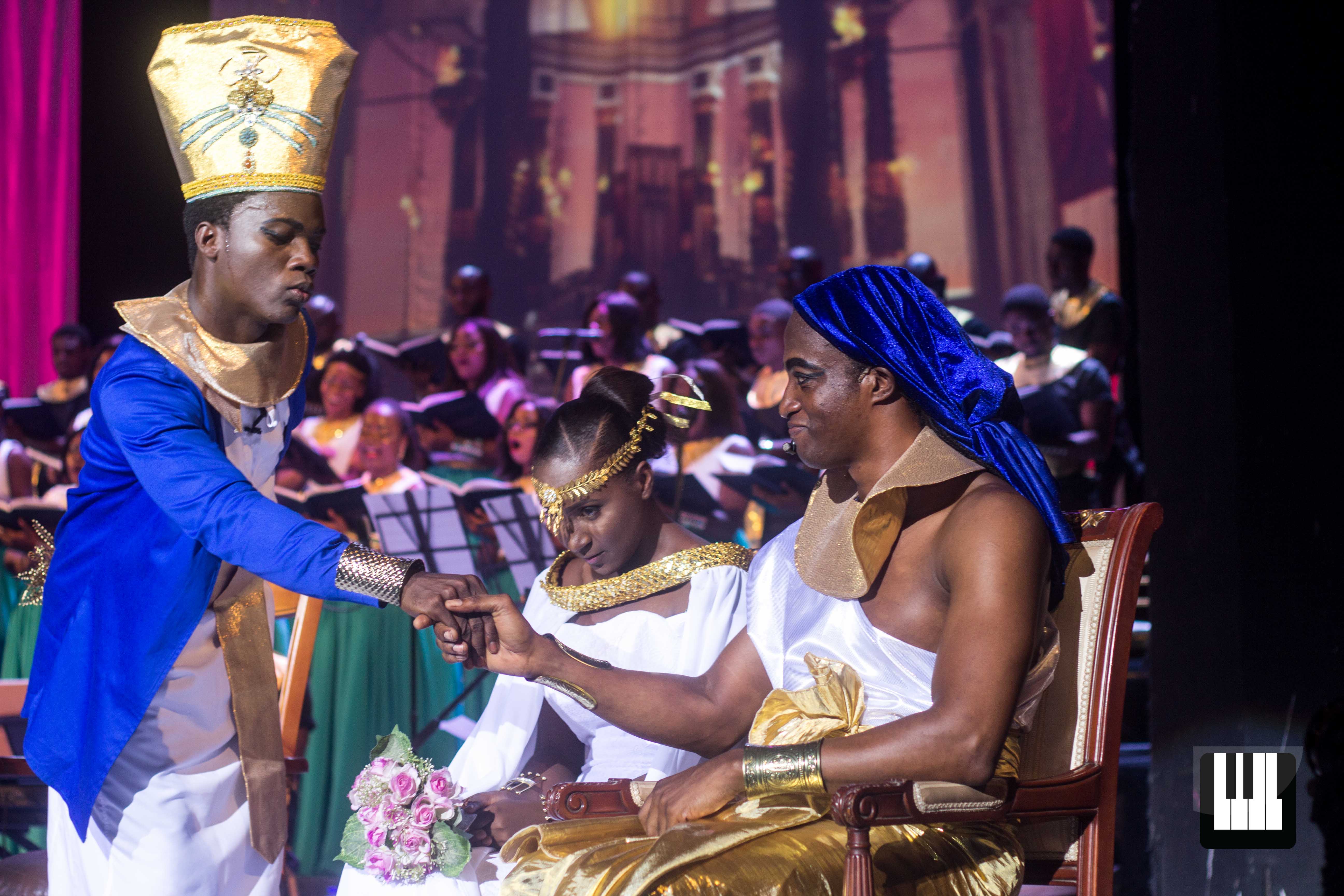 By the time the first act was over, we found a number of things worth noting about this oratorio. The hero of the story was written for an alto. Those more used to the heroic male parts of such productions played by tenors found Handel’s choice curious, if not unsettling. The mingling of alto and soprano voices in the love duet may have added to the poignancy of that scene. At other places, the image of Egypt’s second-most powerful politician was starkly juxtaposed with Ebenezer Amusah’s sweet voice. To Armaah’s credit, the recitatives were accompanied by a harpsichord sound, giving the performance some extra feeling of authenticity. As we have mentioned earlier, this work was dominated by the drama, punctuated by the choruses.

After another fugal opening, this time by the chorus, Act 2 introduced the most charismatic character yet, Simeon . Perhaps it was the natural tension of his character’s situation that led to such an emphatic performance. Simeon is left alone in prison. The sins of his past torture him. On one hand, he reads divine retribution into the causes of his present state, knowing the wrong he has done to Joseph. On the other hand, he falls to blaming the treachery of his own brothers (whom he had worked evil with) for his apparent abandonment. This very human predicament brings out the best acting in Joseph Nii Addo Quaynor. 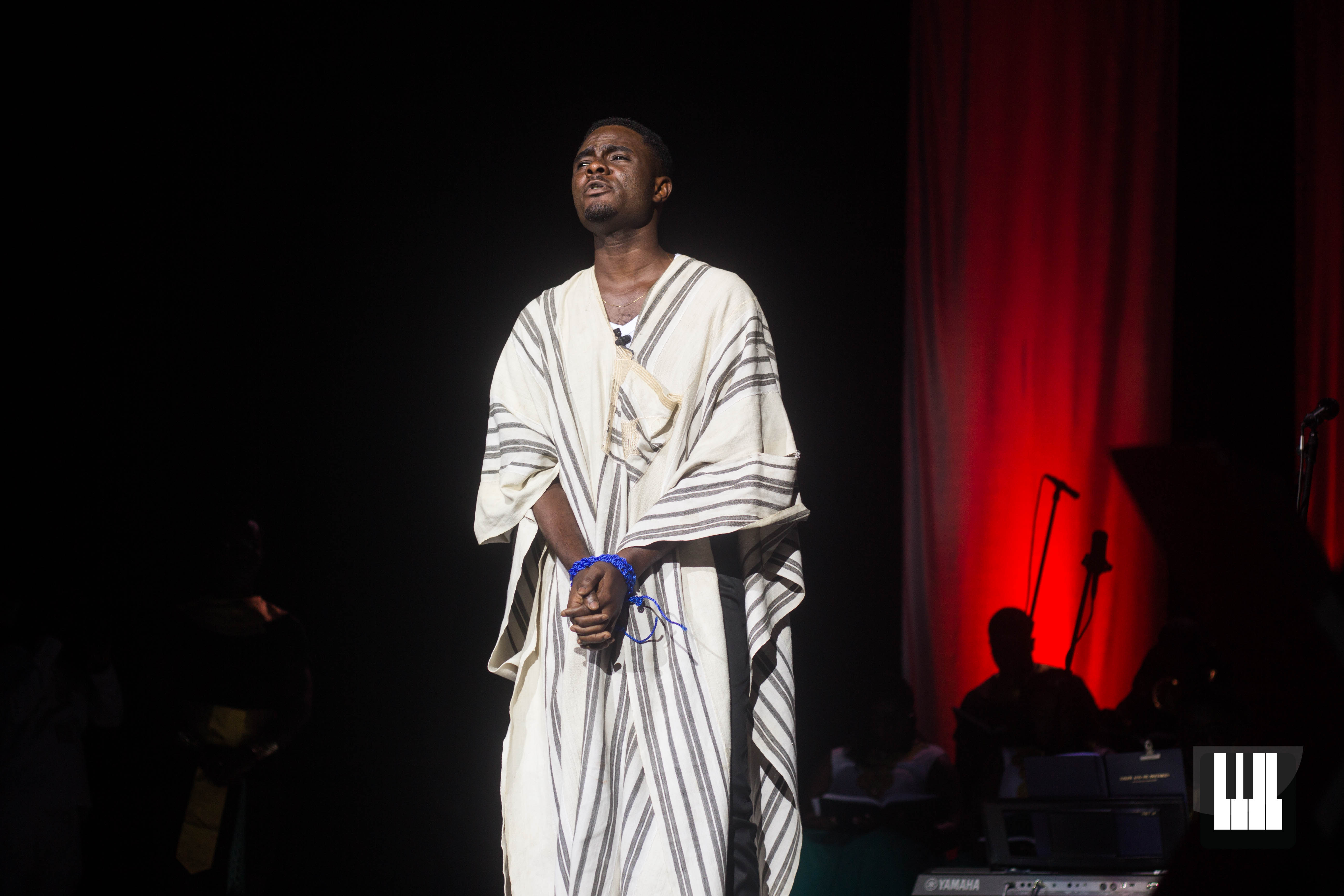 The first confrontation Joseph has with his brothers is with Simeon, and the two are worlds apart. This duet stands as one of the highest points of the performance. Joseph comes alive in the confrontation, and his older brother, now his prisoner, visibly shrinks from him in his wretchedness. Again, this was another scene that communicated a lot more to the audience because of the dramatic acting.

Perhaps this was the key takeaway from watching the entire performance: the audience responded more when the acting was exceptional. This becomes obvious when the context of the observation is considered. The lines chosen by the librettist are not easy to follow. Aside the choruses, the lines are not straight-forward narrative, and so they require more effort from the reader to find them relevant. This, coupled with the highly ornamented singing of those lines drive them farther from immediate comprehension. We’ve had our concerns about staging operatic works for large audiences in the country, and this performance illustrated some of them. Even for a story as familiar as this, the easiest way to follow the performance and maintain interest in story was to read along the singing.

At least the organisers were thoughtful, and had the lines projected. Though they weren’t always in sync with the actors, this was a huge help in making the work more accessible.

With hard to follow poetry and unusual ornamented singing, the best way to reach the audience with the matter of the story was through the acting. And those scenes such as the love duet, Joseph and Simeon, the marriage of Act 1 Scene 6, Asenath’s frustrating argument with her husband and angry exit from the stage, Joseph’s revealing of his true identity to his brothers, those were among the scenes that shone throughout the performance. 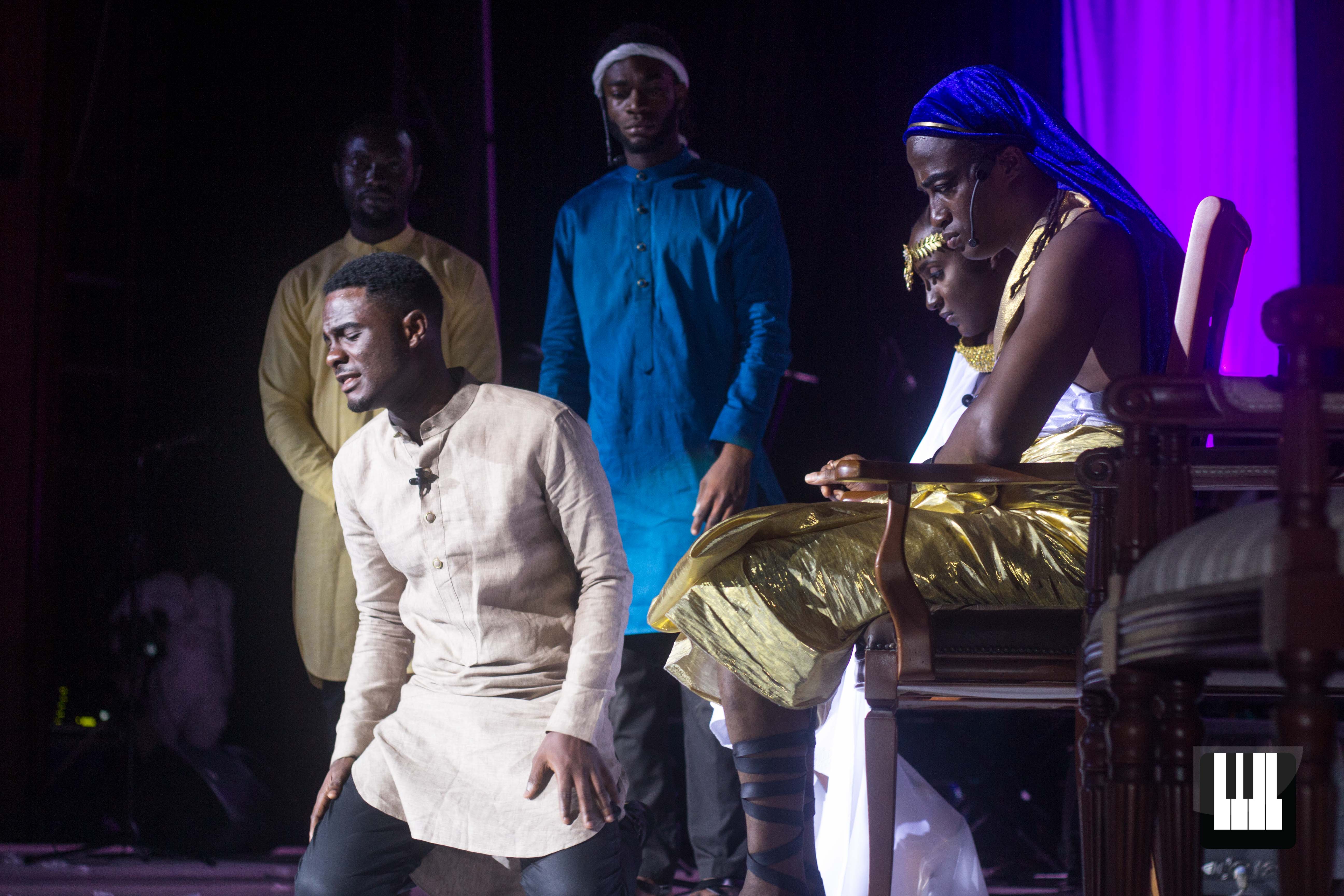 The African premiere of Handel’s Joseph and His Brethren was an overwhelming success. The many people who couldn’t get seats in the large auditorium can testify to that fact, as were those who had to desperately find last minute tickets when word got out that they had been sold out at some designated sales points.

At the end of the long program, the MC called for an encore of the final chorus, a Hallelujah, which the audience received with emphatic applause and a standing ovation.

Some significant players in Ghana’s music scene had a lot of good things to say about the organisation and performance of this oratorio. Speaking the day after the event, Dunstan Guba, co-founder and music director of the Tamale Youth Choir and a former visiting first violinist with the Omaha Symphony Orchestra, called it “perfection”, and even claimed it could be regarded as the best performance in West Africa “for the next 10 years.” He thought it was unfortunate that the historic event did not receive enough international focus, considering how high profile the occasion was. However, he was almost completely disappointed with the panel discussion, insisting that the panel should have featured internationally acclaimed experts on classical music.

Abena Chrappah, co-founder of Angelis Chorale, a small chamber choir based in Tema, saw many good opportunities for art music in this performance. She observed that, by breaking such new ground, Harmonious Chorale was paving the way for other choirs to explore music outside what is usually experienced by the listening public. She stressed the importance of expanding the range of offerings for Ghanaian concert goers, which could create opportunities for more singers and musicians. She felt strongly that there was still some way to go for audiences to fully appreciate opera in the European style, but was confident in the future of the genre in Ghana, suggesting that an opera by Ghanaian composers may be worth exploring.

Theophil Asamoah-Gyadu, Artistic Director at Gramophone Ghana, was full of praise for the singers, the choir, the musicians and organisers of the entire program, calling it a “world class performance”. He also added that he highly respected any music director “bold enough to take on rare, relatively new pieces given that our audiences tend to like to be able to relate to a performance.”

Theophil also shared the opinion that the world needed to hear this, concluding that Africa “may stand a good chance of becoming relevant in the classical music space if we keep putting up such performances.” 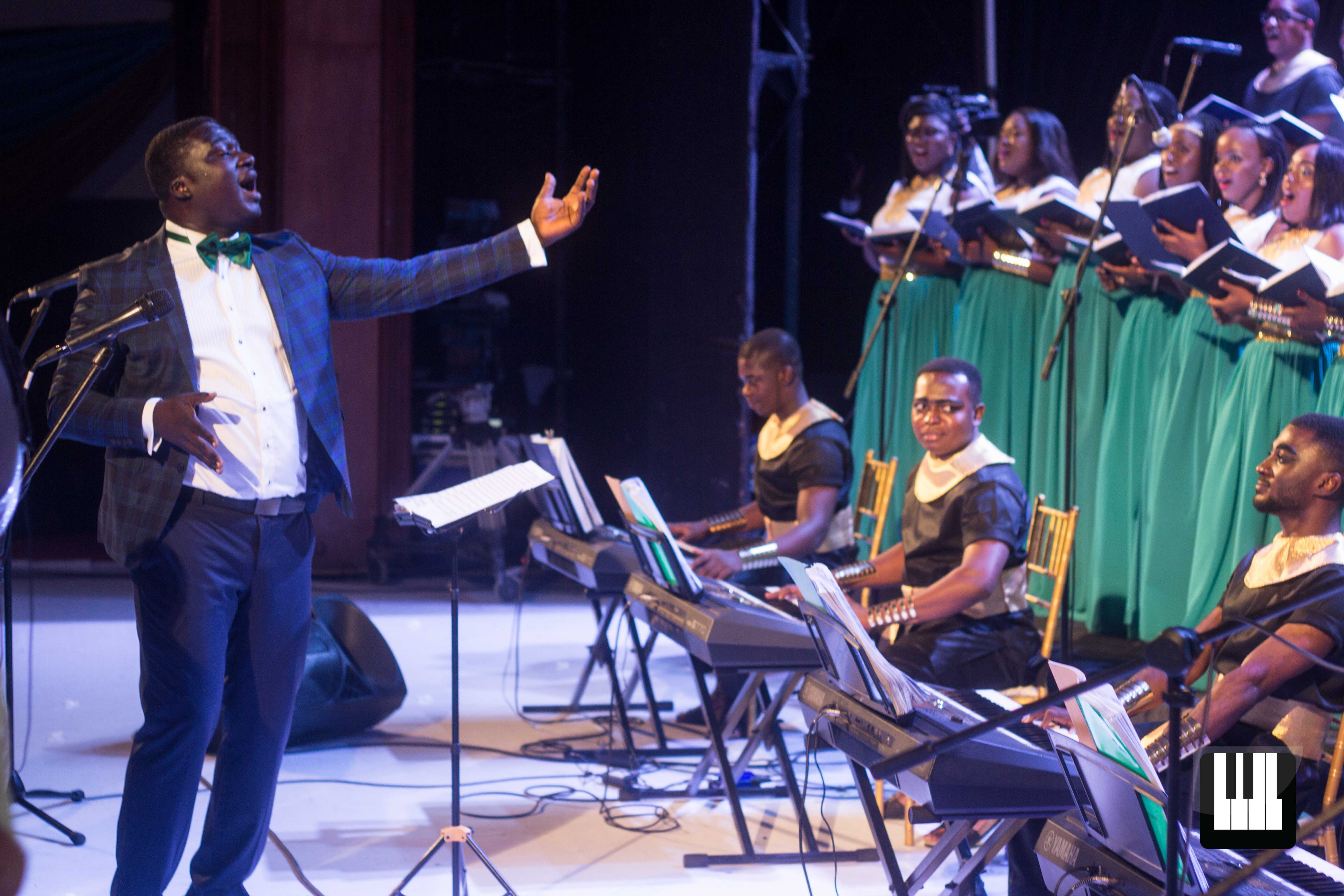 We share Theophil’s positive outlook on Africa’s role in the world of art music. With Ghana’s enthusiasm for classical and indigenous art music, Choral Music Ghana is convinced that the likes of James Varrick Armaah and his Harmonious Chorale, who consistently raise the bar of performance and organizational quality in music, can make Ghanaian art music a relevant cultural export and a significant contribution to the evolution of serious art music in the world.

1 This form is known as a French Overture, as opposed to the Italian Overture's fast-slow-fast structure