The Gramophone Experience concert was Gramophone Ghana’s biggest choral concert this year. The latest in its fifth anniversary celebrations, the concert was also an occasion for a number of firsts: the choir’s first concert held at the National Theatre and its first ticketed event.

The Gramophone Experience also relied quite substantially on technology, with ticket sales accepted via USSD/MobileMoney as well as a rich brochure available for download on the choir's website, which augmented the program line-up slips offered at the National Theatre's main auditorium.

Since the anniversary launch late last year, all Gramophone events have since captured the spirit of the year-long occasion. These included a very well attended and received Messiah - with a typically Gramophone-twist, and their 18th Fellowship of Songs.

The choir did not give much away with respect to what was to be expected at the event. It was hard to understand what “experience” was on offer. As such, we could not expect much, besides the good music Gramophone is known for. And as if to emphasize this void in our foreknowledge, the concert proper actually began under the cover of darkness.

With most members of the audience already seated, all the lights in the auditorium were dimmed and the stage was quickly occupied by four male choristers in suits, a trumpeter and an organist. While we waited for something else to happen, the organist played a medley of popular Christian tunes on an organ provided by Olive Organs. 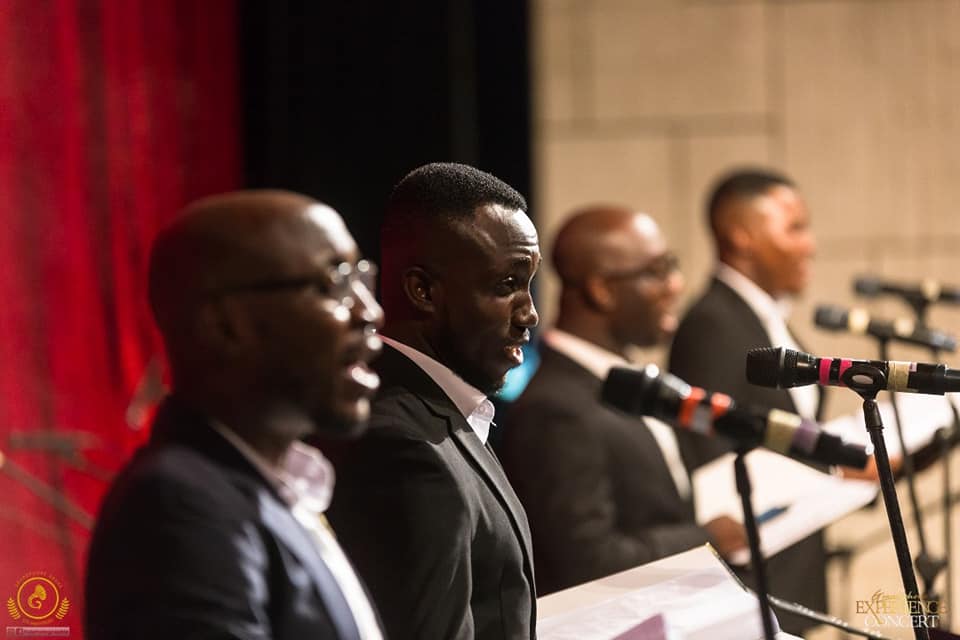 The first spotlight to come on fell on the trumpeter, who immediately began playing a voluntary by Jeremiah Clarke. The next spotlight revealed the identities of the four singers, who included the artistic director of the choir, Theophil Asamoah-Gyadu, Fred Tweneboah-Koduah, Nana Kwamena Amissah-Nyarkoh and Richard Kotey. With the stage fully lit, we could appreciate the full setup, which consisted of an organ on the far left and an antique diwan to the right. Beside the sofa, a vintage gramophone stood on a small coffee table.

After the opening performances, a short documentary on the choir’s five years was screened, after which an MC gave the audience a lengthy welcome.

What happened next was one of the more exciting entrances we’ve witnessed. Unannounced, a section of male singers gathered in the aisles behind the audience sang the opening bars of “Nyame Mma”. After the sudden burst of song ended, they began a slow march towards the stage, repeating that same phrase as a refrain, accompanied by a drum appellation. As they proceeded to the front of the auditorium, the rest of the choir took their seats. Once the rest of the choir was mounted, the full anthem was performed. This gimmick was very well received by the audience.

The first part of the concert, Gramophone Experience I, featured four local anthems, including “Nea Wode Y’abedu Nie” with the composer, JE Nelson, Director of Music for the Association of Methodist Church Choirs (Northern Accra Diocese) as guest organist.

By a good margin, the most exciting piece performed in the first part was Kwesi Twum Ndur’s wild, varied arrangement of the hymn “Great is Thy Faithfulness”. 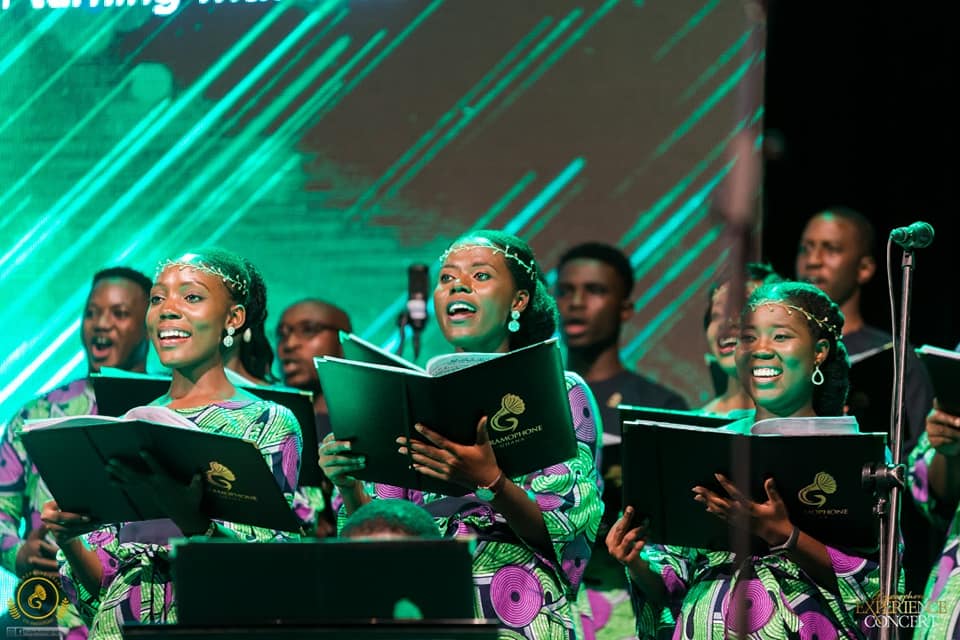 The second part of the Gramophone Experience offered a selection of Western anthems, beginning with a stunning arrangement by the Mormon Tabernacle Choir’s Mack Wilberg of the hymn “Rejoice the Lord is King” (complete with a trumpet refrain and a timpani flourish at the end), followed by a piece from Handel’s Chandos Anthems, and ending with that same composer’s “The Lord is a Man of War” from “Israel in Egypt”, which saw Clement Yorke in a duet with the wonderfully charismatic Fred Tweneboah-Koduah.

Perhaps the most defining moment of this concert was what followed. And it was not musical.

Before the third part of the concert began, an individual, dressed in a white Gramophone robe, took to the stage to introduce a dramatic performance. The act, put on by Teleios Inc, presented a compelling allegory of mainstream Christian theology in a simple narrative that proved surprisingly effective at communicating the overarching focus of the ministering group.

The end of the dramatic performance saw the curtains raised for the choir one more time, revealing the choristers dressed in angelic white, singing very solemnly “When I Survey the Wondrous Cross”. More than anything, this moment of the Gramophone Experience established in our minds the essence of this choir, its mission and its outlook.

As a ministering choir with the slogan “All for Jesus”, the focus of Gramophone Chorus is primarily evangelistic, with the medium of very excellent music from the Ghanaian and Western choral and classical traditions employed to that effect. Their chosen medium, which is our primary concern, is particularly effective at communicating beauty. The dramatic portrayal of their essence and mission, however, did much more service to bring it to our minds.

We enjoyed another distinct transition of musical genres with the next piece, the gospel-style performance of Bill Gaither’s “Because He Lives”, complete with stylistically appropriate piano accompaniment. Both solo and chorus showed some exciting variety which included a sudden, dramatic change to a more stately style when the trumpets and timpani were introduced later on in that performance.

The evangelistic chapter could not be closed without an explicit call to conversion, something we saw coming from a mile away.

Witsfield Kwablah (of the Witsharmonic Choir and Accragio) performed next with the choir as guest violinist, opening Philip Bliss’ “It is Well”.

The third part of the Gramophone Experience hit us with another amazing arrangement by Kwasi Twum Ndur; this time of Sekyi-Baidoo’s “Anigye Sɛm Kɛse”. These moments were an absolute thrill, and were definitely the musical highlights of a very successful concert. 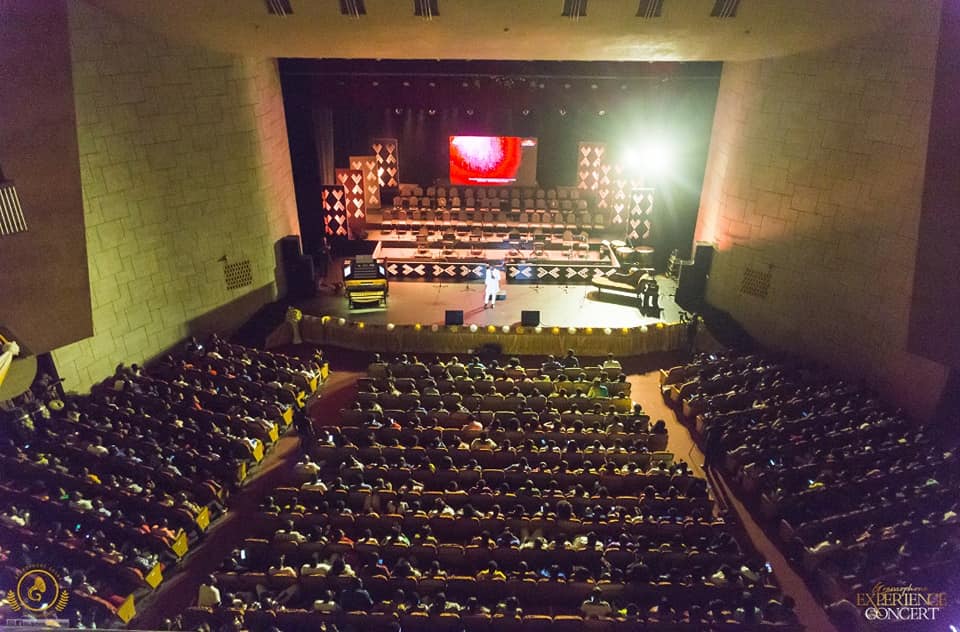 This section of the concert also saw Francisca Ababio sing Handel’s “So Shall the Lute and Harp”, and the choir crown the night with selections from the same composer’s Chandos Anthems and the Benedictus from an unnamed Mozart mass.

As was expected, the night could not be complete without a selection of popular highlifes.

Gramophone Ghana’s anniversary concert left us with a lot of positives. While we found it curious that the dramatic act proved more effective at communicating the choir's mission, by far the most notable were the arrangements by the choir’s organist, Kwesi Twum Ndur, which freely exploited their original material and extended how we appreciated familiar pieces. These little musical adventures were perhaps not possible with the other Western classical pieces.