Jesse from Choral Music Ghana attended his first Singing with Meaning organised by the IMCS Pax Romana Choir, University of Ghana, Legon. He tells us what the experience was like, and what he wishes could be done the next time.

At ten minutes to six, I was lugging a heavy bag towards the St. Thomas Aquinas Catholic Church behind the Nursing School, Legon. The first hints of what was to come were the faint strains of What a friend we have in Jesus coming from the chapel that met me as I crossed the car park.

This was my first Singing with Meaning, an annual event organised by Pax Choir UG. I entered the chapel with some preconceptions, coming from Pax Choir KNUST with its Night of Hymns (which was held about two weeks ago) in Kumasi. 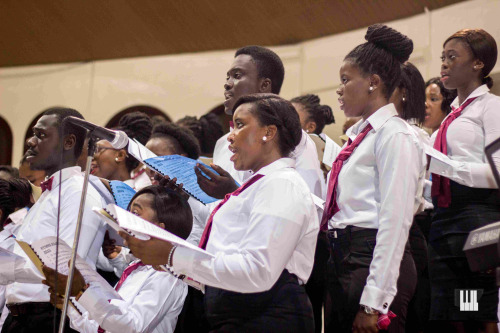 I expected good hymns plus something extra from our sister choir in Accra. I expected choristers in front of the altar, behind their mic stands rehearsing with the sound engineers as parishioners filled the pews and watched on. I didn’t expect to see Blessed Yawson of Living Choir coordinating things with Senanu.

Blessed is a young composer and founder of the Living Choir. He’s active with the Corpus Christi Philharmonic Choir, whom I joined for a small concert at that parish some years ago. We’ll speak to Blessed and his choir later this year when they have their annual Christmas concert. For now, it’s about Pax Choir.

The choristers were in the traditional black and white. A few minutes after I settled, the clock struck six and they descended, making way for the evening’s rosary prayers. Singing with Meaning began sometime after six thirty.

I was more than pleased with the participation. The hall quickly filled up soon after the night began. Rev. Fr Larweh, the chaplain, acted as the MC who introduced the choir, thankfully called for audience participation by keeping quiet “so we can listen to these youthful voices” and summarised the purpose of the night’s gathering.

Singing with Meaning is a celebration of church music that goes a step beyond just singing: its aim is to teach the audience something about the music they are listening to, where the compositions came from, what inspired them and what meaning can be drawn from the words. If you’ve listened to Joyce Aryee’s Hymns and their Meaning on Sunny FM (every Sunday from 4pm) you should be at home with this idea.

Ten hymns were sang that night from Europe, the United States and Ghana. 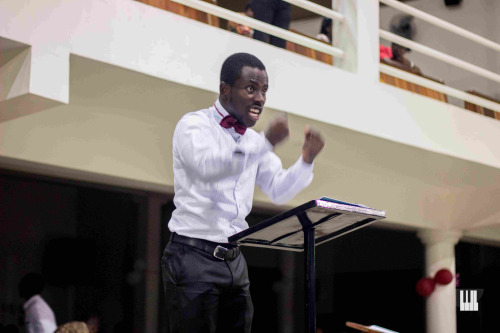 Pax Choir processed with the patriotic hymn Amansuon Twerapon. The order of the procession struck me: basses and tenors led. For those of us sitting in front, we had the peculiar experience of hearing the bass and tenor harmony before the melody of the music. The mood was almost church like: I felt as though I were at a religious ceremony and not a concert to celebrate music for music’s sake.

The first hymn of the night was Te Deum Laudamus. It is an early church hymn that sees regular use in significant ceremonies in the Catholic Church. Its origins are disputed, but the words of this hymn have been set to music by several composers over several hundred years. The music on Friday night was the traditional hymn.

Despite the steady pace of the music, the conducting was charged and enthusiastic, almost charismatic. Patrick, the choir master, showed much character throughout the night. He did much more than keep time with flailing arms: Patrick communicated emotion to his choir and they, in turn, sang back to us as expected. It’s a pity the audience could only see him from behind. His emphatic direction reminded me of my favourite conductor, Gustavo Dudamel.

Pity there was no official video coverage of this splendid act. 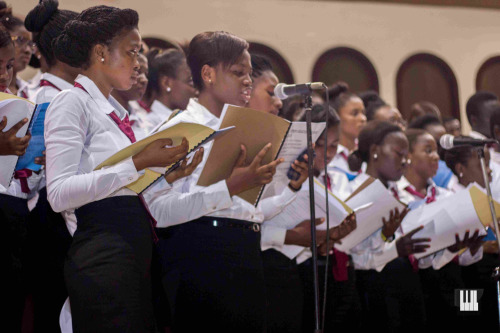 The verse of the second hymn, Tell Me the Old Old Story sung by a quartet somehow came out muffled. Feedback from the giant speakers (I was unfortunate to sit right in front of them) made listening painful. The music finally took off when the choir sang the last verse in unison. Patrick, true to his character, signaled the end of the music with a heart. His little trick of genius had me smiling.

Mary Magdalene, an alumnus of the choir sang a solo during the third hymn, Oduyefo Kese. The Fante harmony of this hymn was written by Prof. Sekyi Baidoo. I first heard Mary during Pax Choir’s Esther Oratorio performed in 2013. She sang as Esther and there established herself in my mind as one of the best soloists I’ve heard in person. Mary Magdalene is also a member of Blessed’s Living Choir.

Thankfully, the audience were quiet for this very beautiful hymn and I had the chance to sit back and take it all in. Since the procession, I hadn’t paid much attention to the male voices. The bass and tenor voices sang a duet at the fourth verse. The severity of the voices as they made their way through the verse sent my mind back to some of my favourite hymns from the Russian Orthodox Church. 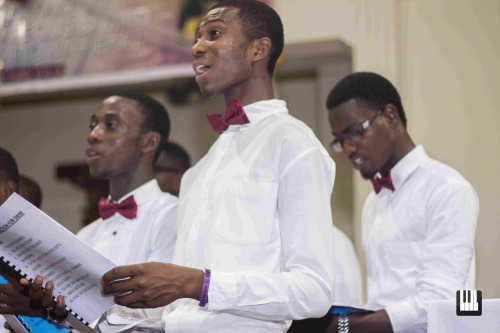 It was from this moment that the performance became truly stellar. A good choir leaves the audience lost in the music they are singing. At Guide, Please, Our Life’s Dark Ocean (CH 287), I felt one more time that joy that comes with music sung perfectly – so perfectly it makes one uneasy. Pleasantly uneasy.

The basses sang with one voice, better than I’ve ever heard them. Again, they did it with that severity I love in a good hymn. I found myself at the edge of my seat throughout this hymn.

GNAAS Choir UG were in attendance as the guest choir. This is the third time I’ve heard them as guests at another choir’s event. I really wish I get to see them on home turf soon.

Their music was most pleasant when they sang unaccompanied. I may have developed a mistrust for accompaniment after several bad experiences where the instruments have taken the foreground, leaving the voices lost behind a facade of brash sounds. That said, the choristers did remarkably well to produce a massive sound despite their small number.

They were followed by the Pax Choir alumni choir. Among the hymns they sang, Sweet Sacrament Divine was by far the most glorious. I’ve had some personal history with this hymn. For much of my listening life, I actually disliked it. I found the music too churchy, lacking drama and tension (in words and music) and every other thing I expected in my favourite music.

Ten years ago, my perception changed during the Holy Week services at church back at home. On Friday, the almuni choir added another layer of appreciation to this hymn. I may have permanently fallen in love with the tenor harmony! So far, I haven’t been disappointed by any Pax Choir Alumni ensemble. I’ve mused more than once that the chorister’s voices “mature” after graduation. Every almuni choir I’ve heard sings with confidence that matches (and often exceeds) other professional choirs I’ve heard. They should become more regular features in our choral music scene. 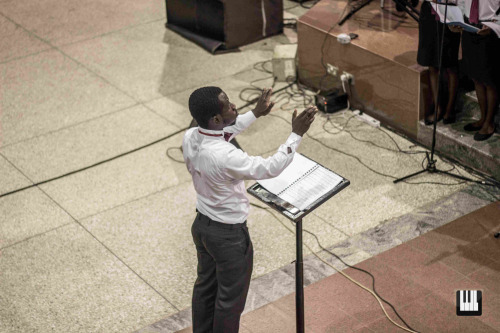 The rest of the night continued as expected: the music was remarkable, the conducting exuberant (my favourite perk of being a photographer: I got some exciting shots!) and the audience mostly decent.

The greatest disappointment was, there was no official recording of the night’s music. If you were not present on Friday, I can’t describe well enough what you missed. An amateur recording may do some justice for now.

We’re looking forward to a more complete coverage of next year’s Singing with Meaning.