Sally Singer Tuttle is an accomplished cellist from the United Kingdom, resident on the west coast of the United States. In August last year, she spent several days in Ghana, with the pianist George François, giving masterclasses to string players and performing in concert at various events, including a fundraiser-concert in support of the New Horizon Special School.

Two months on from her first visit to Ghana, we spoke to Sally about her interest in Ghanaian art music, her encounter with the works of JH Nketia and her collaborations with George.

This interview was originally conducted in mid-October 2019. 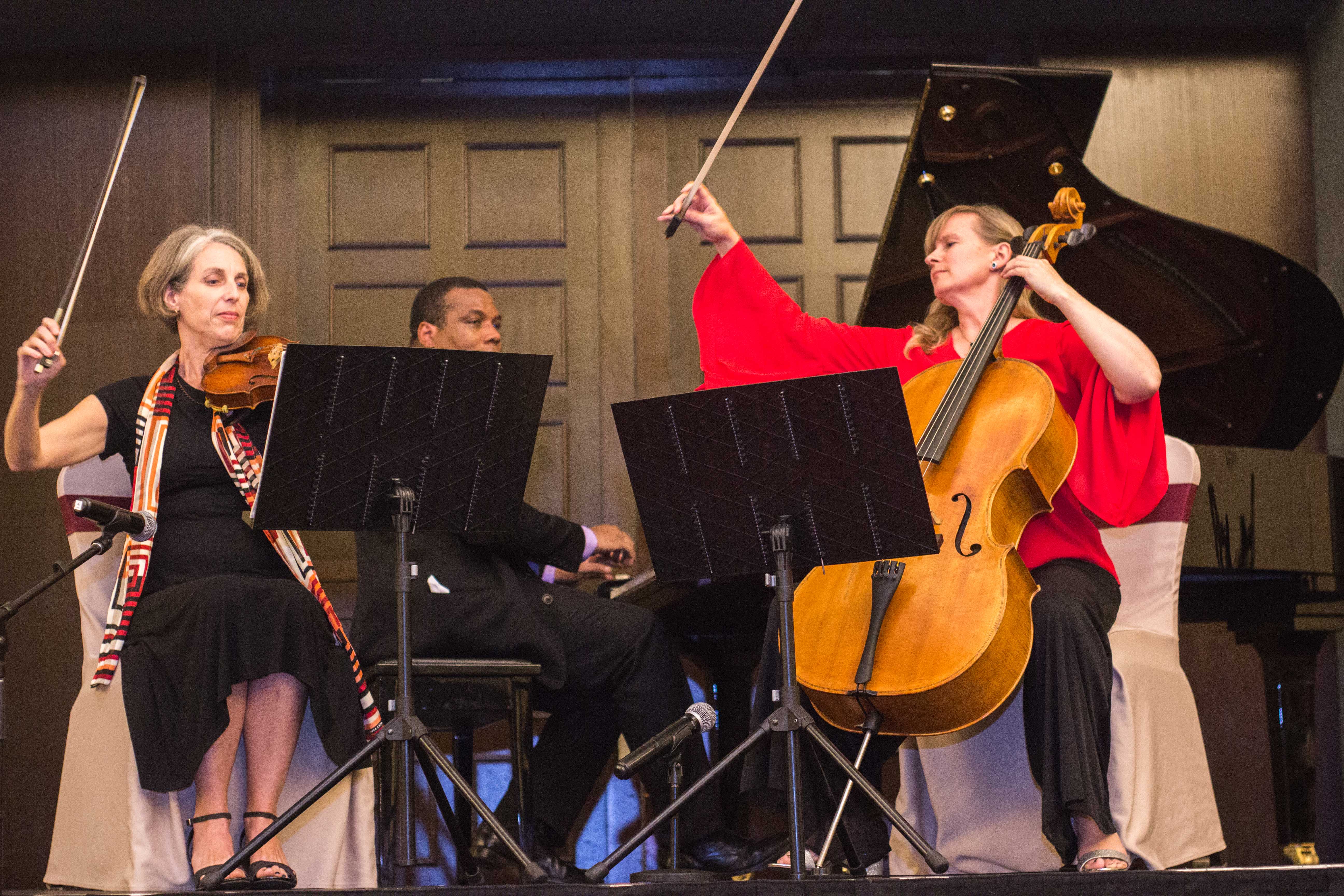 CMG: Tell us something about Sally Singer.
Sally: Professionally, I’m a cellist. I play solo recitals and in chamber music settings. I love to play with other people, so when I play solos - as I do sometimes with orchestras - I enjoy very much being part of the collaborative performance.

I have a number of chamber groups I play with regularly, including the Volta Piano Trio (which used to be called the Icicle Creek Piano Trio). We’ve recorded three CDs. When I visited Ghana, I really wanted to see the river Volta, but I simply didn’t have the time.

I also play with chamber players in the North West of the US, including college faculty, and in summer festivals with musicians from across the globe.

CMG: Can we describe you as a performer and an academic?
Sally:While I'm more of a performer and teacher by profession, I have a doctorate in music and I give cello lessons and masterclasses in the academic setting of a liberal arts college, Whitman College.

After our residency, it was time for us to move on, and a change of name became necessary. Our previous name suggested a small, sparkling body of water. And since a creek will naturally flow into a river, my colleague Jennifer suggested “Volta”, because she knew of my interest in Ghana. A “volta” is also a poetic term that means “a change of direction”. It’s also the name of the inventor of the SI Unit (the volt), and we have had reviews that our performances were electrifying.

So several things came together to make the new name appropriate.

CMG: Your interest in Ghana existed before you finished your residency. Where did that interest begin?
Sally: It began with George François, the pianist. I met him during my undergraduate studies at the Royal Northern College of Music, UK. I had the opportunity of playing with him and getting to know him. Since then we’ve performed together several times. I’ve always enjoyed hearing him talk about his home country.

When we were at Icicle Creek, we had this idea of setting up an organisation called Sankusem. We had the opportunity of holding an African music festival in Washington State. We invited Prof. Nketia to this festival, and he made it! We had the chance to play some of his music for him. One of the most beautiful things was hearing him sing the melodies as we performed!

We also presented Obo Addy, the legendary Ghanaian drummer from Oregon, at the festival. He brought the ensemble "Okropong" with him, a distinguished group of four male traditional Ghanaian dancers/drummers. I learned so much about African music from that festival, and that interest has grown ever since.

Growing up exposed to both classical and pop genres, I’ve always had an interest in combined elements in music. I’ve always appreciated music outside of my own training. At Sankusem, our interest in African classical music has developed since our festival, and whenever I perform African music here, the audiences are always intrigued.

CMG: Can you remember your first encounter with Ghanaian music: that moment you heard something that made you say this is not from where I am?
Sally: It may have been George improvising on tunes he knew from Ghana, very beautifully. On first hearing it, I knew immediately that the whole inflection was different from the European classical one. And when I came to Ghana and heard more Ghanaians speak (and in different languages), so much more clicked in my mind that helped me understand what I had first heard.

CMG: Do you have any familiarity with music from other African cultures?
Sally: I’m only just exploring the tip of the iceberg. I’ve heard some South African vocal music. Some of that has come through to us from pop songs. Outside of this particular area, this is what I have been exposed to.

CMG: How would you define “African Classical Music”? Is that a term you’d use?
Sally: If people ask, I describe this music as classical music written from African source material, because we have classical instruments playing adapted Ghanaian folk melodies.

The term “African Art Music” was coined by Nketia and this is a parallel to “Western Art Music”, a term used in the study of classical music across the centuries. When Nketia writes “African Art Music”, he makes the distinction that it is music in a classical genre written with African nationalism in mind, so that the sound is distinctly and recognizably African. That is something many European composers have enjoyed doing with their own folk music, most notably Brahms, Granados and Bartók. Bartók was one of the first to do what Nketia later did, which was to go round recording music from villages.

I’ve heard the terms African Classical, AfriClassical, and, as you know, there is a series called “Afro Classical Nights” in Accra right now.

CMG: Essentially, would you agree with Nketia’s definition of the term?
Sally:Yes.

CMG: What do you think makes this genre of music special?
Sally: To me, each piece he wrote has a story behind it. Regardless of genre, I think that is appealing, because as humans we’re wired to enjoy stories. As I mentioned, I really enjoyed the rhythmic inflection which was not like anything I’d heard before: and you feel the dance to it. That’s another thing all of us enjoy.

A particular piece I recorded on the CD, one called “Antubam”, is meant for a funeral setting. It has a gravity to it, but it also has great energy and motion to it. It has an almost tango-like rhythm. It’s the rhythmic patterns that have me the most intrigued.

CMG: Can you speak more about the festival you held in Washington State?
Sally: It was held in the early 2000s. Our audiences were thrilled! At Sankusem, we like to have multiple genres interacting. When the dance ensemble came, we decided to have them give a dance masterclass. People learned to move in new ways, and learned some symbolic gestures that were both fun and serious.

We had a debate as well that was quite serious about Africa and the West, and about how music interacted between those cultures. Obo Addy also performed in concert. I played a piece for violin, cello and drums that was originally written for the Kronos Quartet by Obo Addy called Wawshishijay (which means “Our Beginning'').

We had a storyteller tell us some traditional stories too. It was absolutely intriguing, for all ages.

CMG: How come there hasn’t been a follow-up festival?
Sally: A number of things came together to make the first one possible. We were so honored that Professor Nketia was able to attend, and the master drummer Obo Addy, both of whom have now sadly passed on. And things changed at Icicle Creek. I was able to hold a concert - in 2011 - with George and Rachel Barton Pine performing at Whitman College. We performed some pieces from our CD compilation.

CMG: Are you open to promoting this sort of music at future events?
Sally: Very much. I would be delighted to. 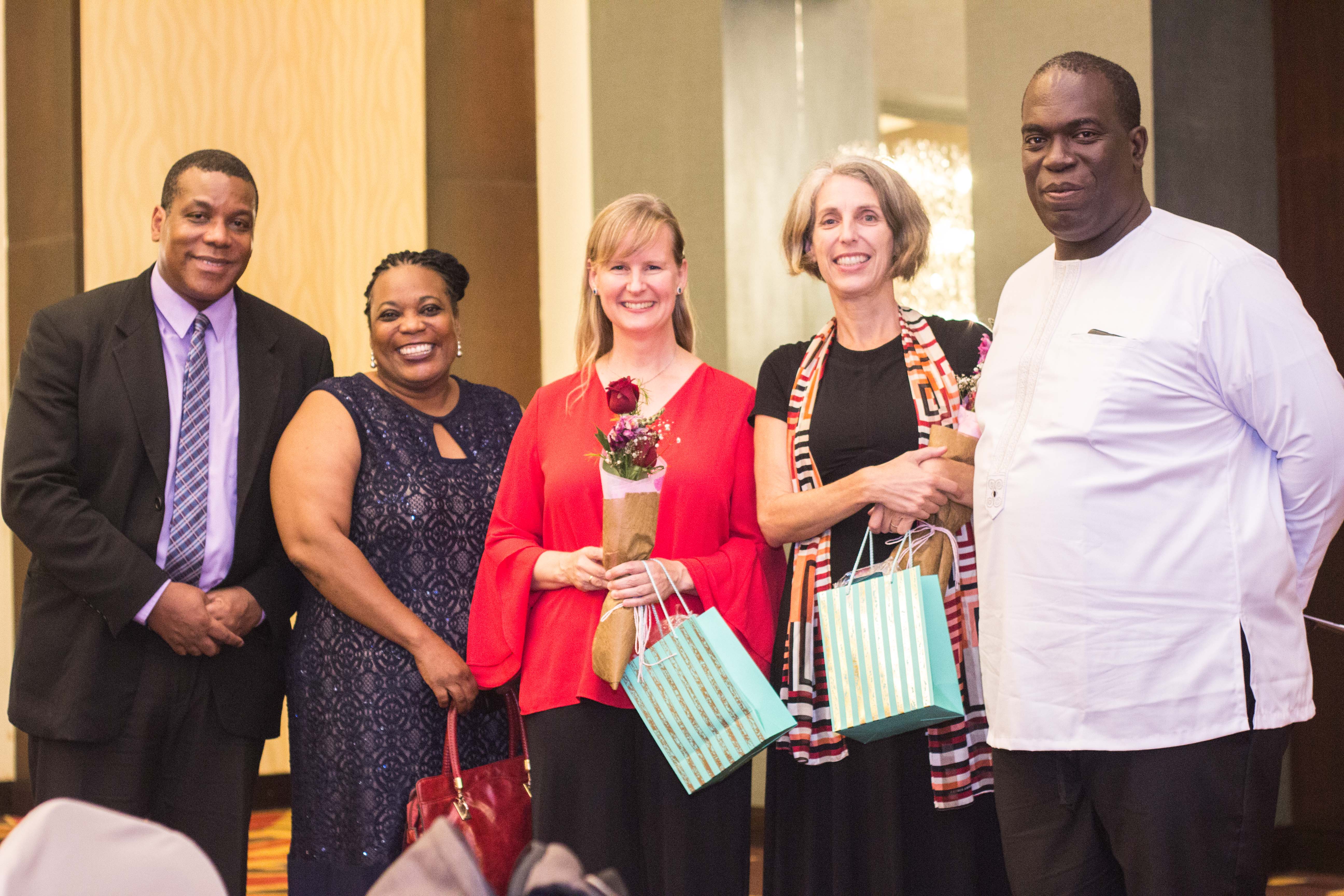 We are hoping that Sankusem can back a festival in Accra at the end of next [2020] summer. It’s not confirmed yet, but if it does come about, we would love to combine teaching on several levels, performance across several genres and reconnect with friends in Accra, Ghana and throughout Africa. We would hope to bring the support of interesting musicians in several genres who’re all willing to talk and teach about their art as well.

CMG: You finally came to meet the place you had fallen in love with. How did you find Ghana?
Sally: I’d always wanted to visit the country after learning so much from George and members of his family. I found the welcome incredibly warm - you probably hear that a lot. I felt like the people were really fun. It’s a little hard to describe how great it was.

I came at the invitation of George. He was planning to give masterclasses in Accra, and he invited me to join him. The help of many friends, including Teresa Barnes and Andrew Barnes (the Australian High Commisioner) and Julius Richardson and his family made my visit possible. They were very supportive of the effort. 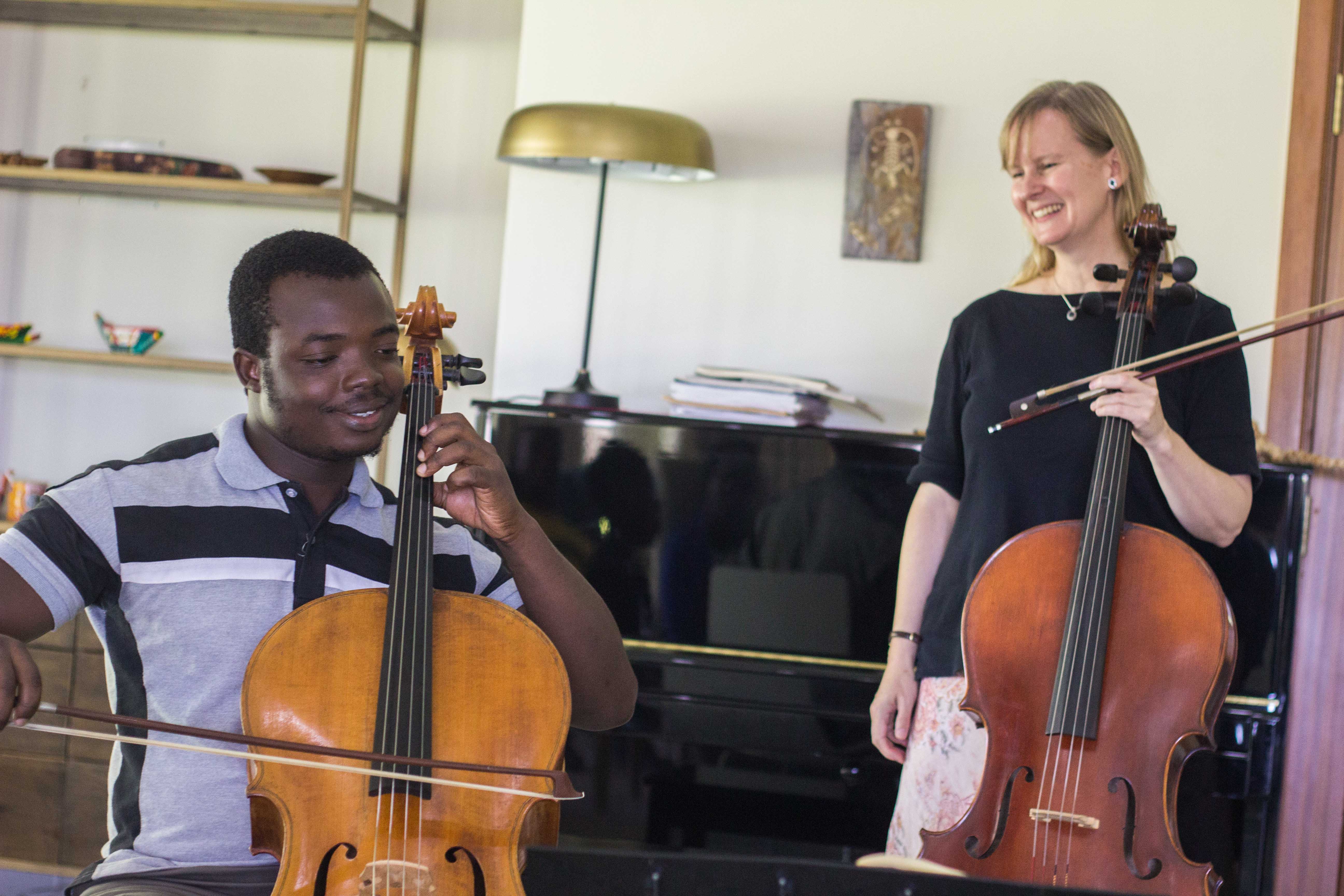 I loved meeting the guys from the National Symphony Orchestra of Ghana and younger players from the area. I loved that a masterclass we had scheduled for 2:00pm to 4:00pm lasted till 8:00pm. That’s my kind of timing!

We went out to Kinder Paradise to meet the children doing wonderful things there. I performed three nights in a row, at the American Embassy, the Ghana Club and at Kempinski Hotel at the New Horizon Special School fundraiser. I loved the international flavour at these places, and the local sense of fashion was a feast for the eyes! The excitement of meeting so many people from different countries was thrilling. 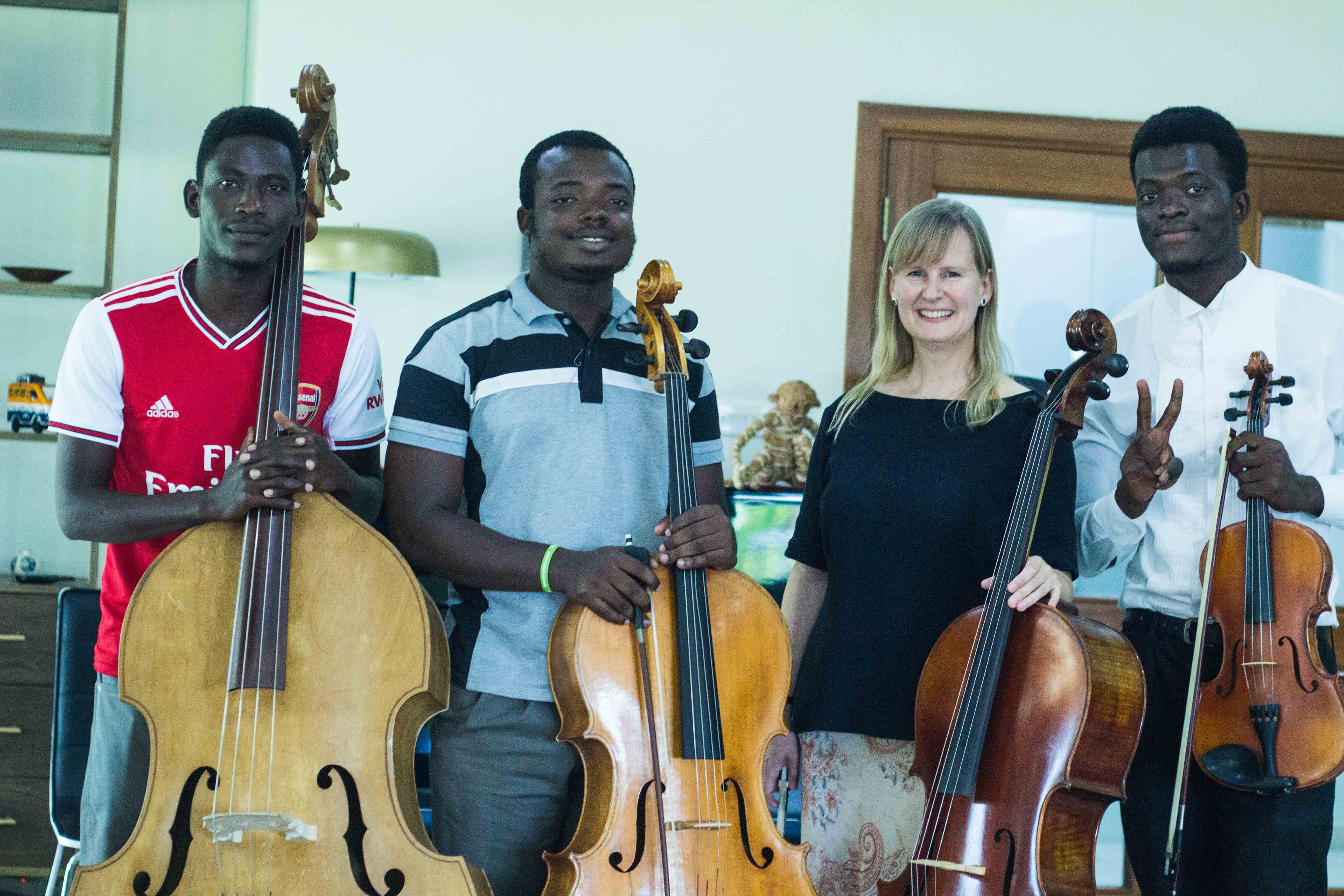 CMG: Is your album of Nketia's works for piano, violin and cello available for people to listen?
Sally: It’s not yet out. We’re in negotiations with the recording company that sent out my piano trio recordings. We hope within 2019-2020, we’ll have it out. Ideally we’ll bring copies along to the Summer festival, should it happen.

Sally Singer’s visit came at a time of heightened activity in the classical music space in Accra, driven primarily by the efforts of Mrs. Teresa Barnes and Mr. Richardson, whose love for the genre has led to, among other things, the creation of the Accra Youth Sinfonietta - a promising youth orchestra with the potential to delight audiences in Accra with great orchestral music.

The visit coincided with activities marking the National Symphony Orchestra’s 60th anniversary, which saw the invitation of the Junge Kammerphilharmonie Rhein-Neckar from Germany on a brief tour round the city and in concert at the National Theatre.

Should Sankusem’s plans for the genre in Accra materialise, the summer months may evolve into a festive period for the classical music community in the city and, perhaps, the larger country.