On Sunday, 13th December, Ghana’s biggest choral music brand,Harmonious Chorale, held their Pre-Christmas Pageant at the Calvary Baptist Church, Shiashie. It was the most high profile event of the season with dignitaries, respected musicians and Miss Joyce Aryee, the ever present Executive Director, in attendance. 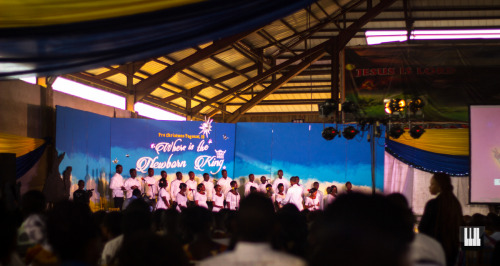 Along with them, a throng with good musical taste filled the chapel nearly an hour before the host choir took the stage. I got there uncharacteristically late (a full few minutes before 4pm!) to meet the choir already on stage, in plain clothes, testing the mics.

The first usher I met handed me a thin, large, glossy brochure for only 10 cedis. It was the program outline. This struck me as odd and somewhat…underhand.

It is important for organisations holding free concerts to raise money somehow. Audiences should be generous to contribute what they can, because organising such events is not easy and more importantly, not free.

The complaints I heard from behind worried me. For a brochure laden with ads, those surrounding me were less than pleased to have paid for it. The good thing, however, was Miss Joyce Aryee confirmed the choir’s decision to sell its program outlines for future concerts. A heads up is always a nice thing.

Fortunately, this did nothing to spoil the audience reception of the choir.

Plain-clothed choristers sang a few hymns to test the mics, while Mr James Varrick Armaah himself went round, checking the output from the speakers. This struck me as relevant to expand on. Any good music director should be concerned not only about the voices of his choristers, but the instruments used in performance. In general, no matter what goes into it, the sound that enters the listener’s ears is what matters most.

Instruments that need to be tuned must be tuned well and be in good condition so an intentional sound is produced by the ensemble. And this is as true for strings and wind instruments, as it is for amplification technology (microphones, speakers, whatnot) that modify the voices coming from choristers. A good choir will sound bad if microphones do not let the individual parts blend well.

In my opinion, good music director is as much a sound engineer as he is a musician.

The sound check by Harmonious Chorale brought to light another fact I paid special attention to. During this period, the chapel was almost filled to its capacity and, while the technical team tweaked their equipment, mostly everyone was seated, watching the choristers, listening.

And when they were done, there was applause.

You know a choir is excellent if it’s sound check music is worth recording and playing again and again. It’s difficult to describe with words how good Harmonious Chorale is. Throughout the sound check, when the entire choir sang together, they sang as one voice: four voices more or less perfectly uniform. Their enunciation was so good you got to focus on the music instead of worrying about how certain words were sung.

Throughout this short exercise I found myself at the edge of my seat wondering just how they did it. The feeling was almost transcendental. 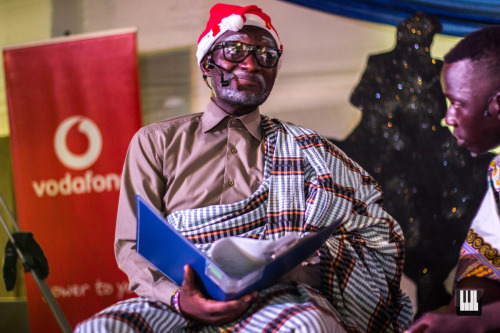 The Symphonials, a choir made up of mostly alumni of Valley View University performed curtain raiser pieces (there were no curtains: a point I will return to) for over thirty minutes, exploring songs of Western and African origin, both traditional and contemporary.

The Symphonials was formed 10 years ago and, much like Harmonious Chorale, the quality of their voices singing in harmony was excellent. But not quite like Varrick Armaah’s choir. There’s this little extra that seems to come from Harmonious Chorale I’m yet to put a finger on.

The host choir finally took the stage at 5:30pm with The Lord Jehovah Reigns, GF Handel’s Your Voices Raise and Varrick Armaah’s Ahoto Aba. It’s needless to reiterate how well these were performed, so I’ll skip that and go on to more refreshing subjects.

This was my first Harmonious Chorale Pre-Christmas event. I’m not sure if this is the format they usually take, but last Sunday’s pageant turned out to be a dramatic re-telling of the Christmas story with music interludes. The music felt mostly incidental, as the focus (it would seem) was more on the story and its spiritual significance in the lives of Christians. If you attended this event specifically for the joy of music, you should remember that Harmonious Chorale is a ministering choir and this mission of proclaiming the Gospel is as important as the music it is known for. So the focus on the Christmas story was perfectly in order.

The drama employed an elderly African man as its framing device. This old man read the story to intrigued and sometimes inattentive children in front of the stage while the traditional roles of Mary, Joseph, King Herod and the wise men were taken up by other actors. 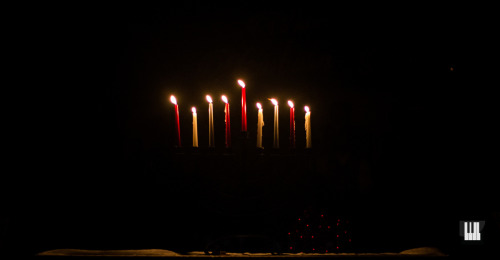 The retelling was - as expected these days - Africanesque and somewhat contemporary, with allusions not exactly biblical but culturally relevant to our context as Ghanaians. At one point I felt as though more thought was put into the drama and the Christmas message. The writer in me wished the dialog were brisk and to-the-point. The music was familiar and as good as you’ll ever hear in the country.

Overall, one could describe the concert as a night of drama and traditional Christmas music, performed by the best collection of voices you can find in Ghana today. And it was all worth the hassle of getting to the Calvary Baptist Church.

There was an extended period where a delegation from the Israeli Embassy, including the Ambassador (who came with his family) took the fore. A menorah was lit in front of the stage as part of the Jewish Hanukkah celebration. I may have missed some of the marketing message, but this, apparently, was the surprise for the night.

I enjoyed it because it was different and I got to hear some traditional Jewish music performed live. I may have developed some interest in Jewish music since my first contact with Louis Lewandowski’s music. It was rewarding, though some of the audience (if not all then those around me) proved rather impatient with it all.

When the Christmas pageant finally resumed, we were greeted with Berlioz’s The Shepherd’s Farewell. It held me spellbound. The beautiful concluding lines of each stanza had me at the edge of my seat one more time. That oh so pleasant swell at the last line got me every single time. And each time it was executed as perfectly as the last. There could be no improvement on it, I can assure you. Again I asked myself how exactly this choir does it. Again I got no answers, only thrills as the next verse ended. 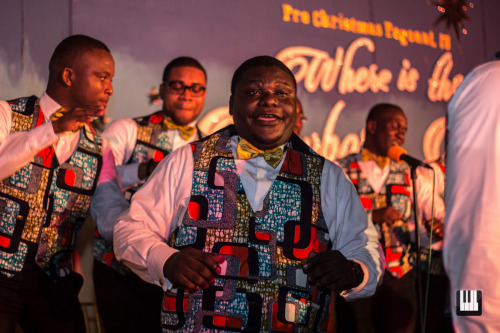 You should watch out for any recording from Harmonious Chorale and skip until you get to this hymn. Then put it on replay. Your life will be better for it.

After setting our expectations so high, what I noticed next may seem trivial, but it is worth pointing out in my opinion. We return to the issue of the “curtains”. Whereas the choir’s comportment while singing was impeccable (and should be emulated by every existing choral ensemble) their behavior when they were at rest was worrying.

After such perfect singing, you forget they are human as you are. And when you see them scratching and adjusting themselves, taking a sip of water, turning their heads to chat, looking this way and that, well…you notice it. That’s when it struck me. Throughout the concert, the stage lights were on them. Even when they were not the focus of the night’s activities, the lights made them the focus.

I feel that is wrong. All good music leaves moments for the performers to rest and gather themselves again, however brief that moment may be. All good musical events should allow for that. Had there been curtains to be raised, the night afforded several opportunities for those curtains to be lowered to give the choristers the privacy to be human and gather themselves for the next set of songs.

Dimming the stage lights was the least they could have done.

This did nothing to spoil the night. The incidents with power did little to ruin the event. The only thing that marred the rest of the night was the selection of songs. I paid little attention to that until about this time (scene 7 on the program outline) when I realised what a terrible headache I had.

I looked up at the projector and there, the next song to be performed was from John Rutter. I moaned within! Not that I have anything against the Englishman (how could I?) but, knowing his style of music, it seemed almost too much after having song after song with largely the same mood. Running through the program outline now, it doesn’t look that bad on paper, but being in the chapel you definitely felt the ennui.

I walked to the back of the hall to change my view (the little I could do to excite myself) when I noticed gaping holes in the audience where, previously people found no empty seats. I was not the only one who felt tired. Other people took the initiative to end the night prematurely.

And it’s unfortunate they did. Ye bo ne din (according to the projection, by Sam Asare Bediako) fell down on us like salvation. It was the perfect mix of jolly Christmassiness in the African context; a quick, almost jaunty tune with appropriate unaccompanied legato sections. It felt like the triumph of Joy itself; a change that brought me from the brink.

And after that, Mac Walberg’s Ding Dong. That Miss Aryee called for an encore tells you how good this was. And, as if it was not enough, Sweet Chiming Bells wherein the instrumentalists on synthesizers emulated bells (which broke the monotony of the sound they’d been making all night long). Also, for the first I thought the trumpet was given a more interesting part to play rather than echo the melody line or play simple heroic motifs. The new sound was stirring! Three lively songs resurrected the night and so brought proceedings to the ninth and final scene. 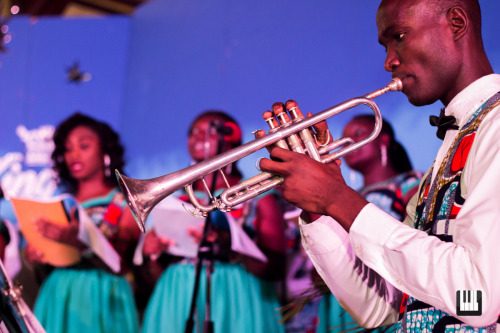 The only thing lacking was that spirit I so enjoyed as a child, best captured in some of my favourite traditional Christmas carols (and not the monstrosities of sound concocted by modern fancies to jazz up “boring tunes”!). You may call me a traditionalist but I’m yet to completely come to terms with the contemporary Christmas sound.

I still enjoy the old Good King Wenceslas, Master’s in this Hall (see Robert Shaw) and even the archaic Adam Lay Ybounden. There definitely was some of the traditional Christmas carol done this night (and flawlessly too), but the sound of Christmas has definitely changed. And maybe for the better.

I’m looking forward to seeing the choir in Easter next year. You should listen out for when the next big Harmonious Chorale concert is announced. We will be there.