Classical Laughs: The Genius Behind the Music

On the 1st of October Classical Laughs, the breakthrough classical music and comedy night from Justice Lomo and the team at Extreme Productions Ghana sees its fourth edition coming off at the Osu Presbyterian Hall on Oxford Street, Accra. The premier edition was a program held at the British Council in 2015 that saw the likes of Kennedy Dankwah and Lordina Osei on the stage, backed by Francis Eyeson and Kwame Appiah Jnr on the keyboard. It won an award at the GH Youth Choir Awards the following year as the Best Introductory Event of the Year.

The first thing any regular concert-goer in Accra would have noticed about the show was the peculiar selection of music performed that night. In a young industry currently dominated by sacred music and themes ranging from the socially upright to the patriotic, Classical Laughs stood out as the first major event concerned with bringing the best of human musical expression to the fore - for its own sake.

From themes that touched on scandalous affairs, infatuation and infidelity to innocent Disney love songs, the show runners turned their innovative production into a bold statement to concert-goers in Ghana - classical music is more than the Hallelujah Chorus.

In a country where many outstanding music directors must work within the confines of their religious institutions and faith-based donors, the liberation that Classical Laughs offered to the listening public struck a chord with us at Choral Music Ghana. Since that day, we have been following the progress of Justice’s vision, and seen it blossom. From the first day, we had one question on our lips: who was responsible for selecting the repertoire that stood in stark contrast to the average concert-goer’s experience? 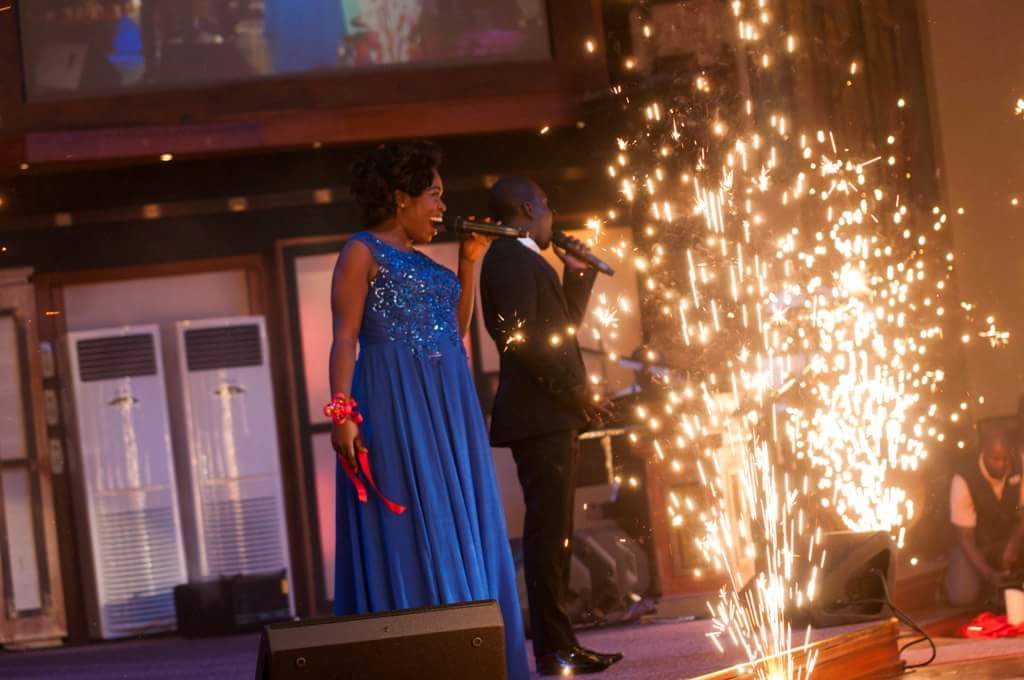 Naa is a musician with LUMINA, the group that performs regularly with Mensa Otabil’s Accra Symphony Orchestra. She is also a member of James Varrick Armaah’s Harmonious Chorale, the highest profile choral ensemble active in the country. Naa’s musical training was at the University of Education, Winneba; the same school that has produced some of the highest achieving musicians in the country. She is well placed in the heights of Ghana’s art music industry.

Naa’s specialization in school was Voice, and she boasts some proficiency in the keyboard. We spoke to her extensively, to gather some insights into her work with Extreme Productions and Classical Laughs.

CMG Did you have any musical history (or experience) before your studies at Winneba?
Naa I was a chorister in my church, Ramseyer Presbyterian Church at Bubuashie. I started from the children’s choir, then moved to the junior choir and the senior choir.

CMG Growing up, what sort of music were you drawn to?
Naa Hymns and classical music, country and traditional music. My dad had a gramophone player with collections of these, so my house was flooded, morning and evening. It became part of me. I remember when I was in primary school, I’d get to school late on Fridays because a friend of my dad’s (who lived close by) would be playing some classical music. I’d sit behind his house to listen for a while before continuing to school. I didn’t mind the canes!

CMG Okay, that was fun! When did you start singing?
Naa It must have been when I was six, or seven. I was with the children’s choir at church, which was meant for children aged six to eleven. I remember going for my first competition with them when I was seven, but I’d been with them for some time.

CMG Did you win that competition?
Naa We came second. I cried the whole day. You know when you’re a child, people tell you you’re better than others. So when someone else is judged better than you, wonteaseɛ!

CMG How did you get involved with Extreme Productions?
Naa Justice is a good friend of mine, and a colleague at Harmonious Chorale. He proposed the project to me some years ago, and we took it from there. Since I have some technical knowledge due to my education and background, he put me in charge of music and talent hunting.

CMG Great! So let’s talk about the music. What goes into selecting pieces for this program?
Naa We consider a variety of factors. We’re aware that the following for classical music is now growing in Ghana. We try to keep our repertoire interesting for our audience by mixing in some contemporary pieces they can identify with.

We also consider our singers’ experience with classical music. Vocal type and technique also help us decide which songs work for each performer. 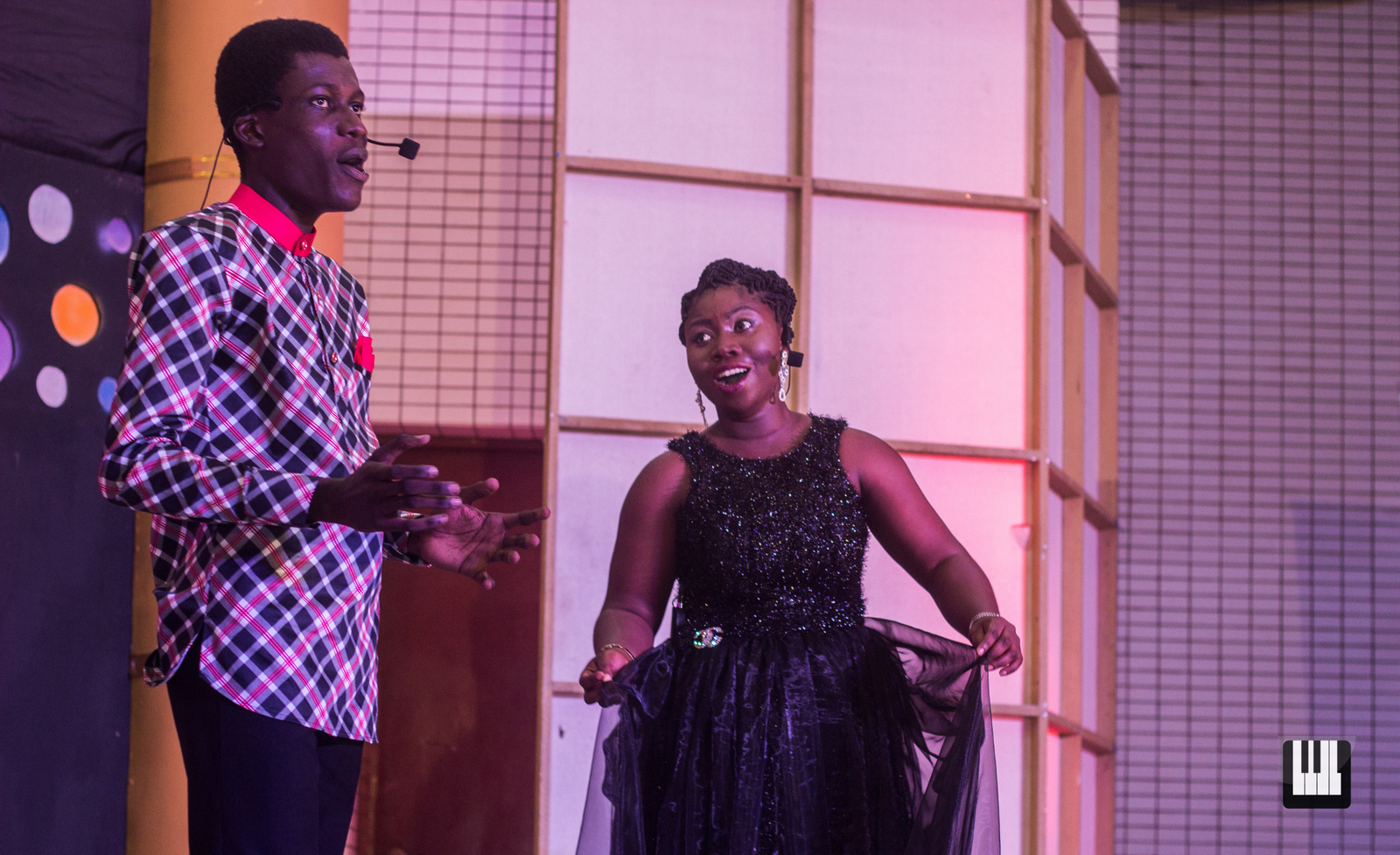 CMG Your “classical” selections are somewhat unique, not very popular, and markedly different from what listeners in Ghana will usually hear. For instance, most of your music is centered on humanist themes, as opposed to the sacred. Is this deliberate?
Naa Not quite. We just try to not make it like the normal solos they perform at their youth choirs. Our pieces are “not popular”, but they’re known to a section of the crowd. And they (the audience) hopefully find them interesting.

CMG That’s interesting. Your pieces are “known to a section of the crowd”. Who do you select your music for?
Naa Our music is meant for aficionados of classical music. But we blend in some contemporary pieces so we don’t leave anyone out, so that those who identify with them will also enjoy our program. The hope is, we will gradually whip up their interest in classical music. We’re aiming to make it a show that every “music” loving person will want to attend.

CMG We assume you’re trying to distance this program from the “usual” that music lovers are likely to encounter in this country. What do you think of the common repertoire from our country’s choirs?
Naa It’s not bad, for a start. Our country is growing to appreciate choral music. Going back some years, people used to tag the music of the so-called “orthodox” churches as “boring”, because they mainly sang hymns and anthems. It was the Winneba Youth Choir that caused people to rethink that notion - especially those in non-orthodox churches. It’s been growing since. Now we can boast of over forty youth choirs in Accra alone. The “normal” repertoire is okay for us. Choirs are venturing into oratorios and the like. That is equally good.

Not to be biased, I think Harmonious Chorale is charting a new course. From the sophisticated work the choir has performed, I am confident that, if given the chance, they can stage an opera. This opens opportunities for other choirs. They see what we do and know they can do same. We used to watch these things on TV and on YouTube, wondering if we could perform like that. Today, we have soloists who can match some of the internationally renowned.

CMG Who can you name?
Naa There’s Kojo Sam, Guy Bertrand, Isaac Acquah, Uche Nwabueze, Esther Adams, Leslie Caren, Lordina Osei and many others. Kennedy Dankwah and a new discovery will be featured at the upcoming Classical Laughs. There is talent in Ghana. We don’t have the music schools and conservatories to hone them, so all these guys are raw talents.

CMG Is there any concerted effort by Classical Laughs to make these artists more famous? It's obvious that these people are highlighted by your marketing, but are you going beyond this?
Naa Yes, there is. We’ve had some interest in bringing two renowned classical performers to the country to hold masterclasses and recitals for our singers. That’s the most I can say right now, but there’s a lot we’re planning to do to project them.

CMG How has your music been received?
Naa Since the beginning of this project, we have never seen a decline in our numbers. The opposite hasn’t been too massive, but we’re looking forward to better days. People who have travelled for concerts outside the country have commended us for the initiative. I’ve had people tell me they don’t understand the songs performed, but the quality of the singing, the costumes and the “elite” nature of the event draws them, so they attend every edition. 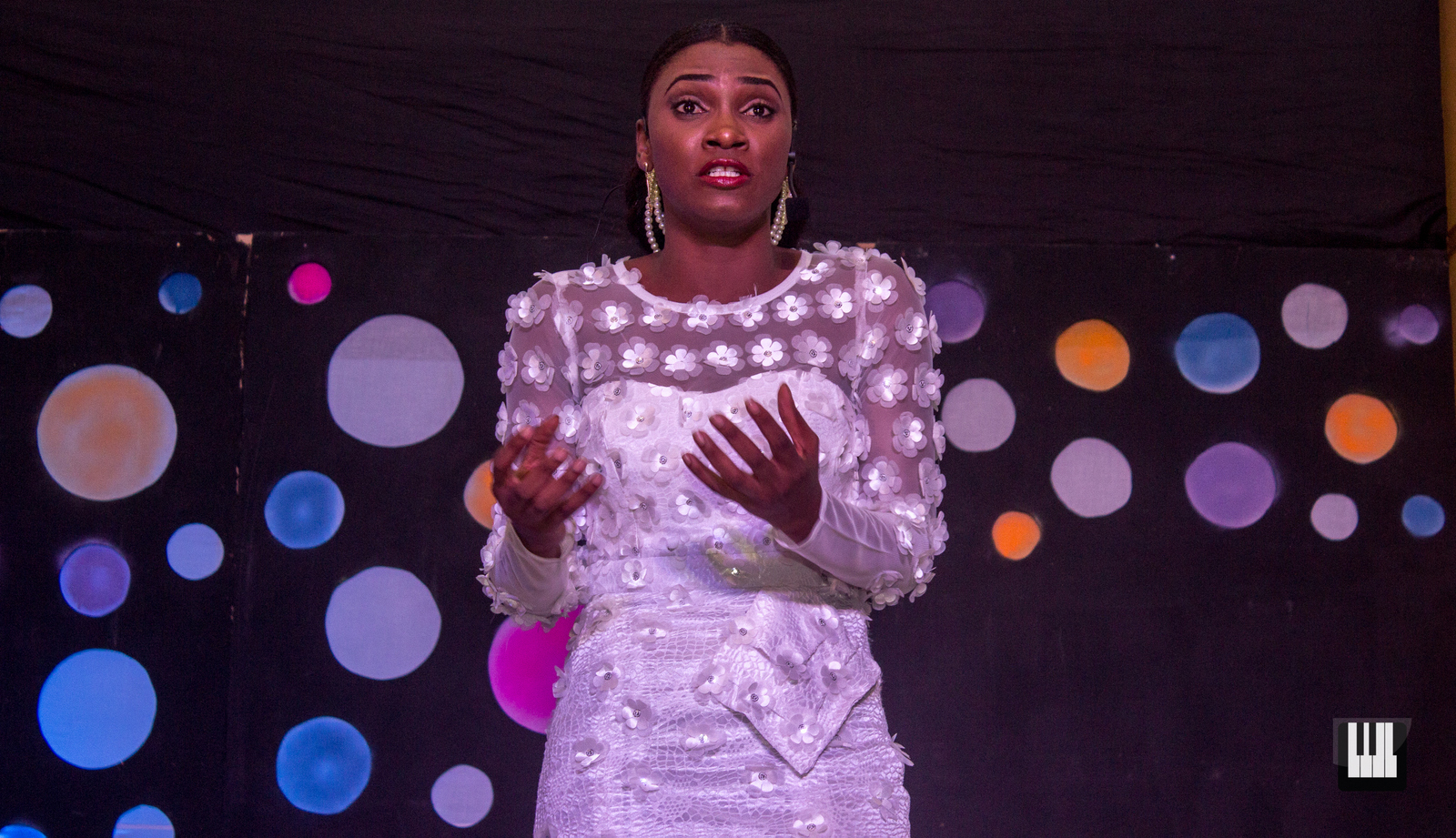 CMG What don’t they understand? Is it the language, the style of music, or something else?
Naa Language and style. Our repertoire is mostly Italian operatic arias, and Baroque and Classical music isn’t too common. I know a lot of adults who are like I was. I had the benefit of explanation, but they don’t. I think Classical Laughs is one of the platforms we can use to educate them outside of music classrooms. That’s why we make our performers give some background before they sing.

CMG Why Italian? There must be some good English arias. Why not something from Gilbert & Sullivan? Or even more Handel and Henry Purcell?
Naa Honestly we’re still ex'ploring. This year, we’ve thrown our net a bit wider. We’re doing a love duet from Andrew Lloyd Webber's Phantom of the Opera. And something from Jerry Bock’s Fiddler on the Roof. We even have Handel’s “Arm, Arm ye Brave” from the Maccabaeus. This time, we have a couple of English compositions on board.

CMG So far, what has been your favourite piece? Which ones will make your top five?
Naa I can’t count. A lot of beautiful arias have been performed in past editions. But I would love to see “The Wrath of Hell is In My Heart”, that famous Queen of the Night aria from Mozart’s Magic Flute performed again. I’m sure it will find its way into my top five, if I could list them!

CMG Favourite soloists?
Naa I love them all. Some are already experienced, and others are completely new. I’ve enjoyed working with them. Especially the new ones you can tell are willing to learn.

CMG Speaking of learning, how much work goes into each performance? How much practice, learning and coaching do your singers get?
Naa It depends. Those with little or no music theory knowledge spend a lot of time learning their songs and technique. Then, we try to perfect their performance. For those more knowledgeable, I allow them to learn the songs on their own so we can work on technique, performance acts and small corrections before their performance.

CMG Which soloists are you dying to work with, and what pieces are you eager to perform?
Naa There’s a vast ocean of pieces to choose from. Composers have done so much. If I move to more contemporary composers, there’s Broadway to the Theatre, and even modern opera. Concerning the soloists, I see uncharted territory outside Accra - places like Kumasi and Takoradi. I’m sure if they’re given the chance, they will be able to do what those do here. And perhaps better. That’s my project for next year, God willing. 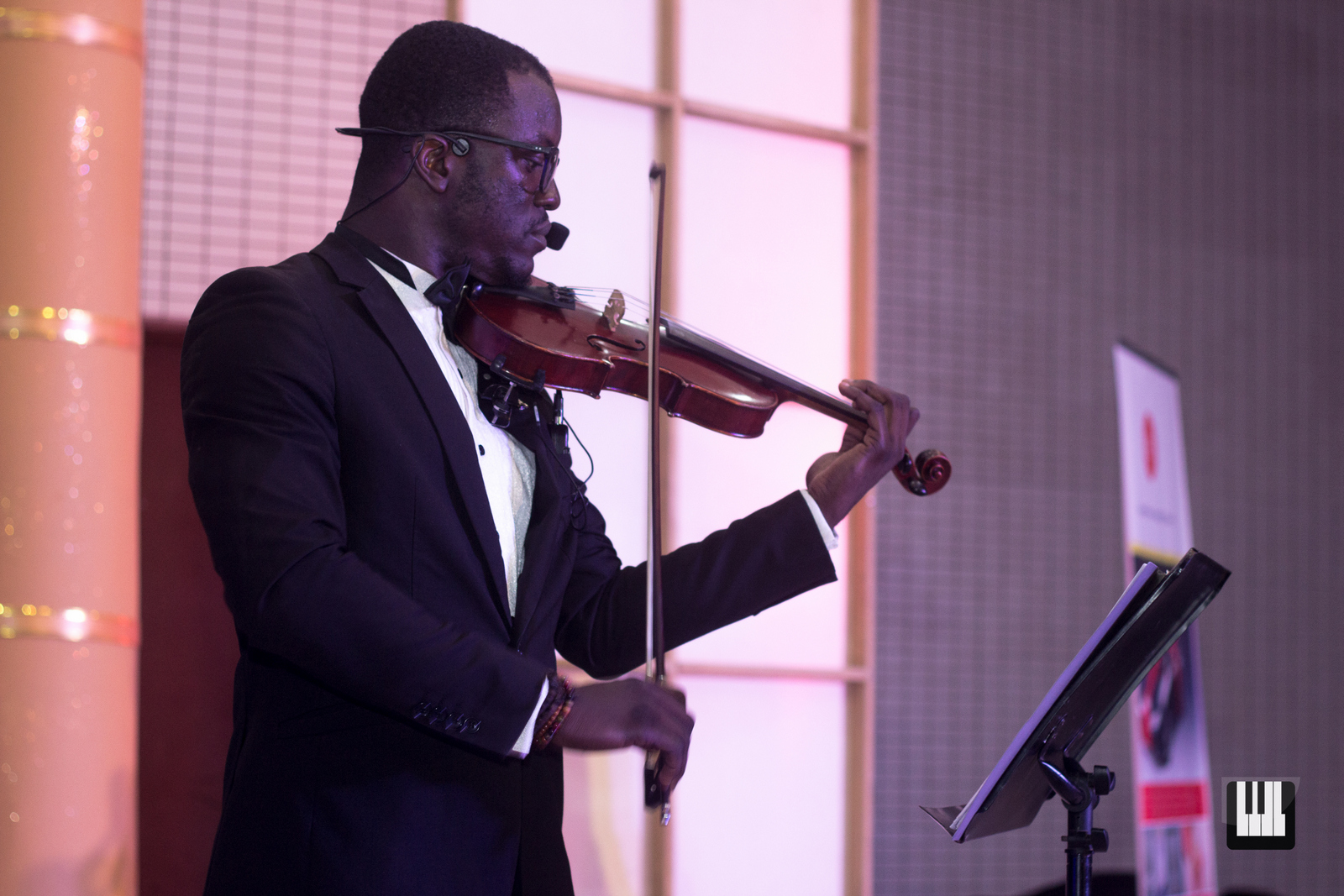 CMG Your last show featured two musicians - Michael Akinrinsoye and Patrick on the violin and trumpet. Since Classical Laughs is focused on singers, are you deliberately extending a hand to musicians?
Naa Yes. We’re taking it a step at a time, but the picture is bigger. I can’t spill everything now.

CMG Thanks so much for your time, Naa. You’ve been amazing! It’s not easy finding someone in this industry who chooses to be so open about their work.
Naa I love to share. It gives me the opportunity to learn. Thank you.

The genius behind the music of the show was evident from the first edition. This short interview threw more light on the thinking behind the repertoire, and the broader vision of Classical Laughs. We’re privileged to have witnessed the birth of something remarkable in Ghanaian art music. If the team at Extreme Productions keep at it, we might have on our hands the most serious art music production company in the country.

That’s something to look forward to!