Last month, as part of the Black History Month celebrations, Jermaine joined the Afro Maestros Orchestral Ensemble for the Kumasi edition of The Journey. Here’s how he found the night.

When in a tertiary institution, it’s not uncommon to find a gem of a programme that is usually overlooked. The Afro Maestros Orchestral Ensemble’s The Journey proved to be such a programme.

The Journey was a concert in recognition of Black History Month, a project which won a competition organised by the Ministry of Tourism and American Embassy based on the portrayal of the Slave Trade through music. The orchestral ensemble’s tour from Cape Coast, Kumasi, Legon and finally Tamale is the result of that endeavour. On the eighteenth of February, the second leg of the tour was held at Kwame Nkrumah University of Science and Technology. 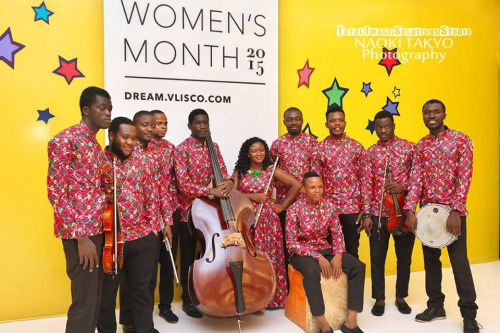 Contrary to the poster, the programme started a full hour late. I was saved from being bored to distraction by the intervention of Agya Koo Nimo and the Adadam Group as they entertained the audience with music and dance.

Finally, at six we got underway.

The Journey chronicled the evolution of African music in the diaspora with commentary from popular spoken word artiste RhymeSonny.

With Aburokyi Abrabo, Apatapa, and Yare3'ya, Agya Koo Nimo and the Adadam Agofomma group portrayed traditional music pre-Slave Trade in Ghana. After their exeunt, the University Choir and the Afro Maestros took over; ingeniously showing how the settler folk music and religion shaped a drum-less genre into a voice filled with a yearning of slaves for freedom.

This era of spirituals was characterized by sombre singing with toned down melodies from the orchestra. I liked the way they and the choir depicted the subtle rebellion of the slaves through the only means left to them – music.

A time skip, to after the Civil War unveiled one of the bright spots of the evening.

Bella, the female vocalist gave a pretty good rendition of Guantanamera after a shaky start. Her plaintive style of singing won the hearts of the audience as she sang through the Swing Blues and Jazz eras of American music.

I didn’t think the evening would get much better, till we entered the final stage of the programme: The effect of the end of the slave trade, the return to the Motherland and the influence of the different styles of Western music on African soil. Thus we got to hear some OSIBISA!, some Reggie Rockstone and Okyeame Kwame. The programme ended with more modern hiplife, winding up with Wisah’s Y3wokrom.

This was definitely different from what I was expecting, having heard the Ensemble before. Tonight’s concert was more relaxed, and audience involved transitioning from a quiet evening to a more energetic one not much different from a regular pop concert. I do have complaints however, apart from the usual late commencements that seem to characterize events nowadays.

It was only by chance that I managed to hear about the Afro Maestros last year, and this year, one would think for a programme that turned out to be as successful as this one there would have been a lot of noise.

In fact the main dissatisfaction among the audience was the fact that there was no hype whatsoever; a major reason why the auditorium was not even half filled to capacity. “Classical music” isn’t considered boring, or monotonous. Afro Maestros Orchestral Ensemble definitely proved that, and it bears on them to fully advertise themselves if they are to come out of the shadows.

I’m just adding this because I couldn’t resist, Telemo by Gazmilla from their fourth concert in Legon.