Jesse Johnson made it to his second Fellowship of Songs last Sunday. He shares his experience of the Easter themed celebration, the first FOS to be organised this year.

My first encounter with Gramophone Chorus was by rumour. At that time I was with the Saint Thomas Aquinas Youth Choir, rehearsing Mozart’s Requiem in D for All Soul’s Day mass. I learned a fellow chorister was preoccupied with rehearsals elsewhere. With another choir. 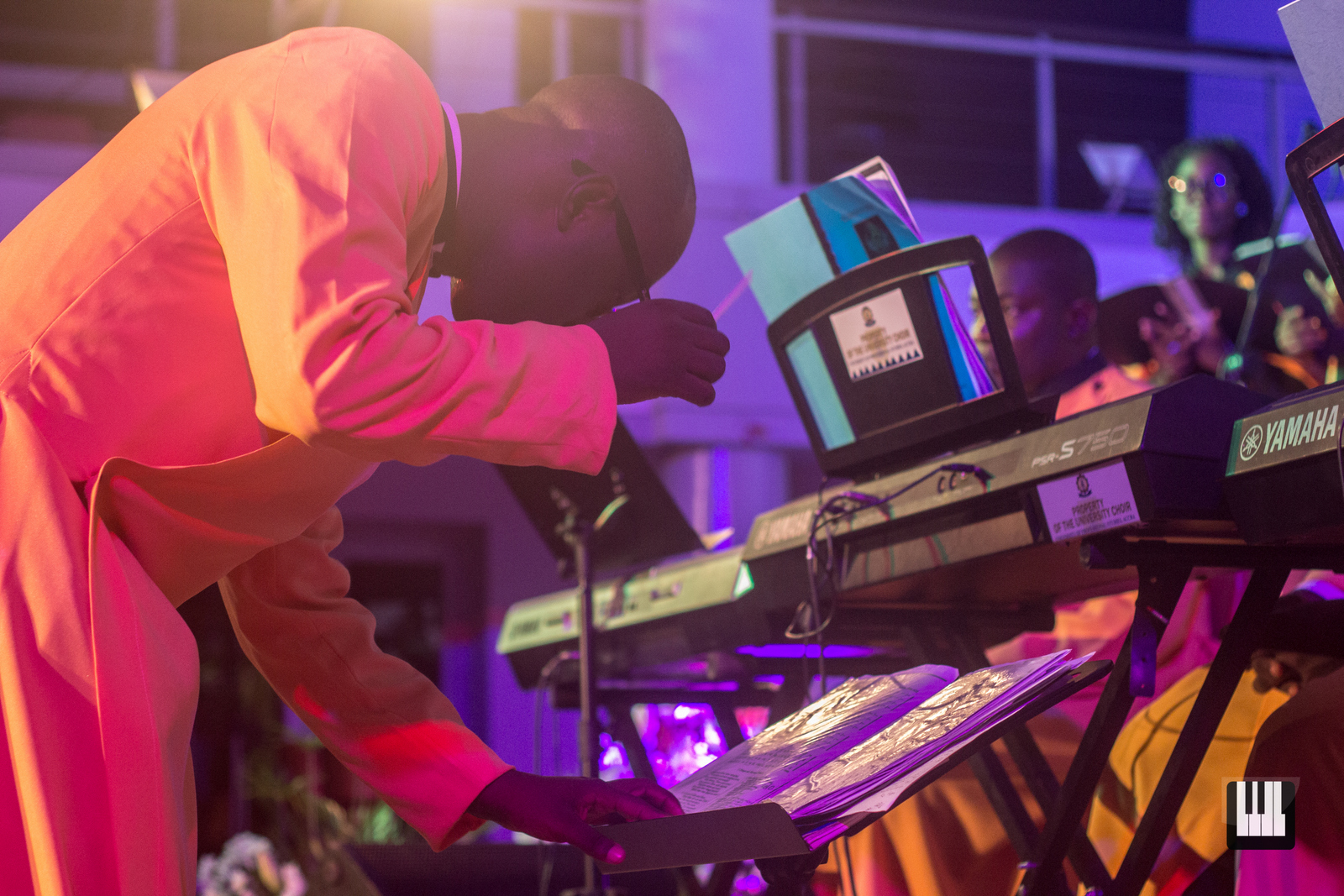 My first experience of Fellowship of Songs marked an important moment in my appreciation of Ghanaian choral music. I realised I was hardly the only one in pursuit of good music. More than that, the instant I heard the voices of Gramophone Chorus sing “Thine be the Glory”, I knew that better people than I had similar dreams of raising the standard in choral and classical music in Ghana. And they were actually doing something about it.

I’ve since come to respect the organisation and management of Gramophone Ghana, from their exuberant tone of voice and presence on social media, their dashing robes, the care with which they present the most professional image of any ensemble in Ghana, and their brilliant performances. If there’s one group that sets itself apart from the mass that makes Ghana’s serious music scene, it is Gramophone Ghana.

The Trinity United Church, a small church in the middle of a quiet theological seminary in East Legon hosted the seventh episode of Gramophone’s Fellowship of Songs. It’s a short, thematic celebration of Christianity through music, sandwiching a sermonette that has become something of a phenomenon with music lovers since it started.

I found myself seated fifteen minutes to 6pm, the starting time of the event. The chapel was busy with ushers and the technical crew testing mics, lights and camera stuff. It was largely empty. Pockets of visitors came in and settled as I did. On the dais, beneath a towering cross fixed to the wall were seats for the choristers behind an array of four synthesizers. I enjoyed the play of lights and the music coming from the speakers. Some of the audience agreed with me; breaking into spontaneous applause when one song ended.

At four minutes to six, a man I took for the MC welcomed us and said a short prayer. Only the front half of the chapel was full. More people came from the back to fill the rest of the seats. It wasn’t yet dark when 6pm struck, and Gramophone Chorus took the stage in their gold and black robes. Theophil Asamoah-Gyadu, conducting the choir, took the stand.

The first song, Te Deum Laudamus, started without introduction. I missed the title slide on the projector, but followed the words throughout the ministration. The chant was airy, ethereal and apt for the serenity of the seminary campus. It felt appropriate to begin this Christian event with one of the finest examples of early church music that remains with us today. Watching Theophil’s emphatic conducting as the choir sang line after line was a delight, as was getting lost in the slow, grave harmony of that chant.

After this, Maukeni Padiki Kodjo, Gramophone Ghana’s General Manager took the fore. This was unexpected. I assumed she wasn’t singing since she wasn’t robed like the others. Instead, she performed a poetic narrative that was meant to knit the songs together into a cohesive story: the traditional Easter story of Christ’s trial, execution and resurrection. 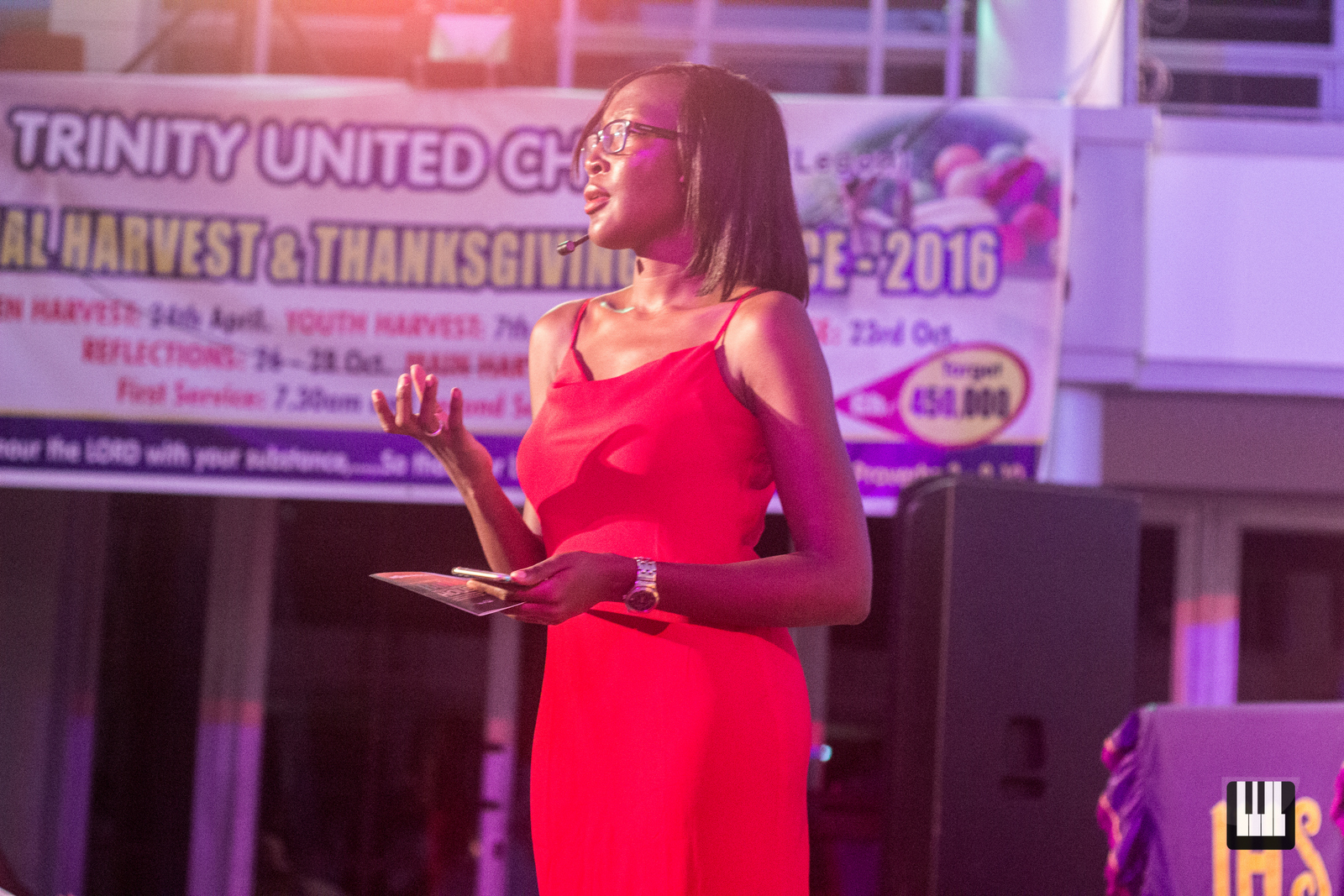 This was the moment the entire event was put into context. I’d actually forgotten we were in the Easter season, and this episode of FOS was Easter themed. In the Catholic church, we’re still marking Lent, so celebrations of this sort are liturgically premature. Gramophone Ghana may have ushered us into this year’s Easter celebrations, seeing the crunch of events slated for Palm Sunday weekend and after.

After Keni’s introduction, we skipped several centuries into the height of Baroque Europe, with Herr Unser Herrscher from JS Bach (whose 331st anniversary we mark today). It is a chorus from his St. John Passion. I had never listened to it, so this was a new experience. And it was an absolute thrill! The chorus begins with three dramatic “Herr”s, then rolls along in a mess of polyphonic passages, adorned with long, melismatic phrases, punctuated with brief moments of rhythmic unison that are like islands in a tumultuous sea. For the first time listener, you will get lost in the tangle of voices. Which is not a bad thing. This is Bach we’re talking about, and rare glimpses of musical wonder can be seen in the intricacies of this composition.

Gramophone’s performance was expressive: the choristers seemed to jump emphatically from mood to mood. However, at several points in the night’s performance, the instruments rose up to compete with the voices they were accompanying. This muddied the challenging polyphony in the piece. I didn’t fail to note the apparent confusion of sound must have perplexed the audience. Those around me were silent (a merciful relief) and took everything in.

I found further evidence of this when, at one moment, during the cadence in the middle of the song (I’m still not sure why this was so), the audience broke into premature applause. The bass from the speakers was excessive, drowning the rest of the chorus in one long, persistent groan. Now, after subsequent listenings, I feel a lot of the beauty was hidden beneath the heavy layer of sound.

The dreadful beauty of this chorus ended well, and we found our way to an even more frantic expression of the trial of the Christ before Pilate. This was a chorus from Olivet to Calvary. The drama was plain to see; the choristers particularly vindictive in their cries to “crucify Him”. As I had never heard (of) Olivet to Calvary, it was another first, and a fitting one too. I rightly guessed the chorus was English, and wrongly attributed it to Stainer, though I admitted I’d never heard it in his Crucifixion. This moment, for me, was the highlight of the night.

From the rollercoaster of sound we saw in the transition from Gregorian chant to German Baroque chorus to English cantata, we finally settled in a well of poignant feeling as Christ was officially condemned to painful execution. The next song was Hwe wo Agenkwa, a Twi hymn set to the tune of Sibelius’ Finlandia. The transition in music mirroring the Crucifixion narrative was by far the most pleasant experience in this FOS episode.

Unfortunately I couldn’t follow the words. Spoken over the solemn chorus was a Twi narrative that I also didn’t understand. The pleasant (and tricky) use of narration with actual singing reminded me of John Adams’ On the Transmigration of Souls in honor of the victims of the 9/11 attacks on the US. This, on a personal level, made the spirit of the moment perfect for the point of the narrative.

At one point, the soloist perhaps got carried away and momentarily broke the solemnity of the hymn, jolting me out of the spirit of the music. But Finlandia brought me back and kept it going until the end. After this marriage of Nordic nationalism to Sub Saharan spirituality, we were led gracefully back to the German expression of the most profound mystery of the Christian faith: the death of the Deity on a Roman cross.

O Sacred Head now Wounded shone in all its bleak wonder. A husky-voiced lady from the audience sang one stanza solo, as did one tenor from the choir. He took liberties with his notes, giving us the first hints of the contemporary style soon to take over the concert. The lines of the fourth stanza of Bach’s hymn alternated between piano harmony and unison in forte. It was a nice innovation, charming and only a bit disconcerting. It’s a tricky thing to do, come to think of it. Gramophone Ghana executed this quite well, and left me impressed with one of my favourite hymns. 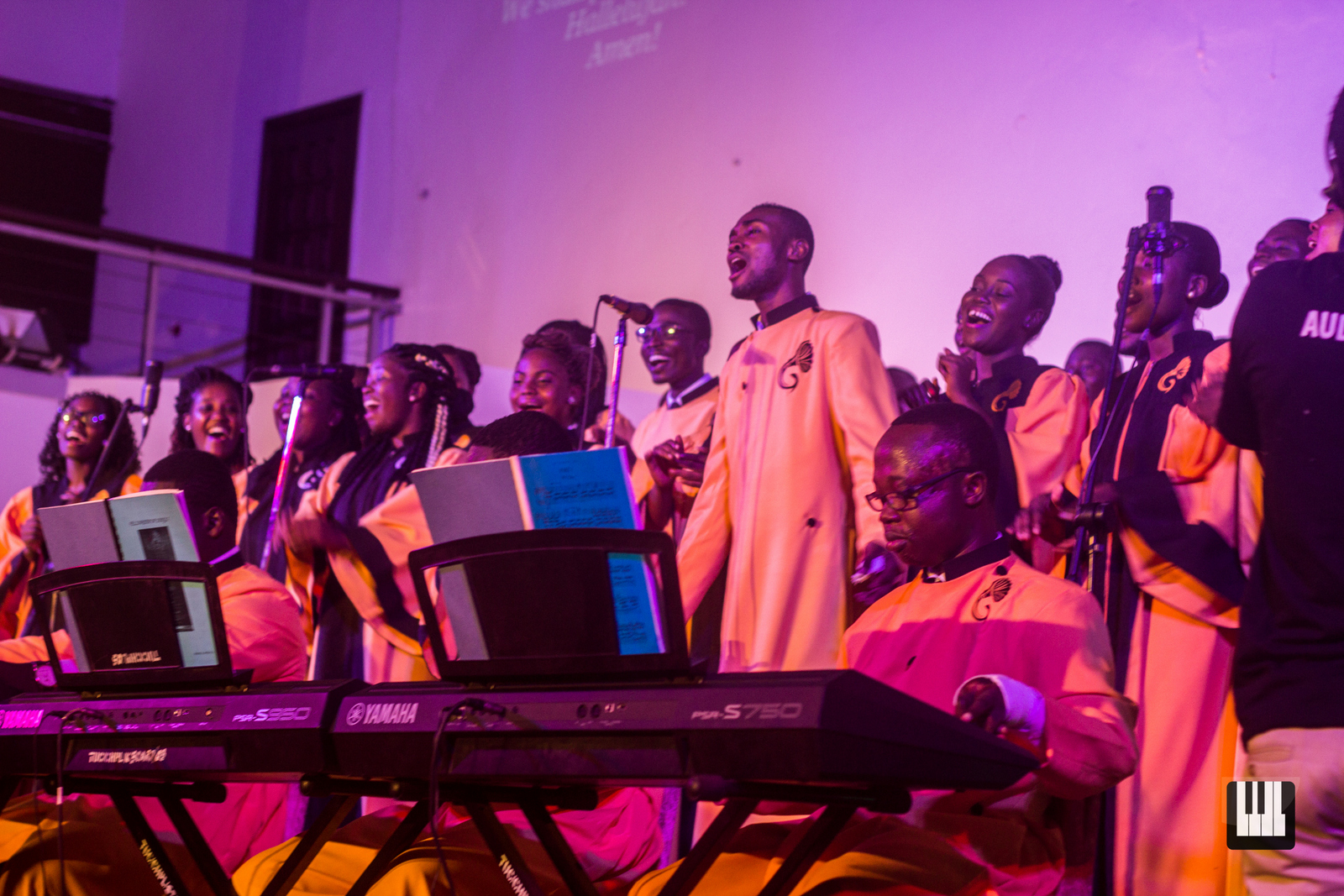 Following this was a stately song by Newlove Annan (who celebrated his birthday yesterday), Jesu Do No, and an arrangement of As the Deer Panteth. I’ll be honest; I’ve heard better choral arrangements of this popular song from the University Choir at KNUST. I was a bit disappointed with this performance, knowing my bias towards chorale style.

This didn’t seem to bother anyone at all. Before I was aware, the transition was over. The narrative Keni started at the beginning of the event had broken down. The order expected in the performance of serious music was no more, now fully replaced with the spontaneity of serious worship. Everyone except me was in on this already, and was joining in song.

And that is how the first part of Fellowship of Songs 7 ended. Mrs Ellen Gyamerah-Ako gave a short sermonette, after which Keni reappeared, dressed in white. Now we had entered Easter proper.

I wish I took note of the hymn Ellen sang at the beginning and end of her talk. It had a marvelous melody, an almost folkish character that was at once authentic and touching. I don’t remember anything of it, other than how I felt when she sang: humbled.

Varrick Armaah’s Deboneyeni resumed the contemporary character of the later stage of the event, with solos sounding more like Gospel virtuoso singing than what you’ll regard as “classical”. After this, the music fell into the spirit of traditional hi-lifes. 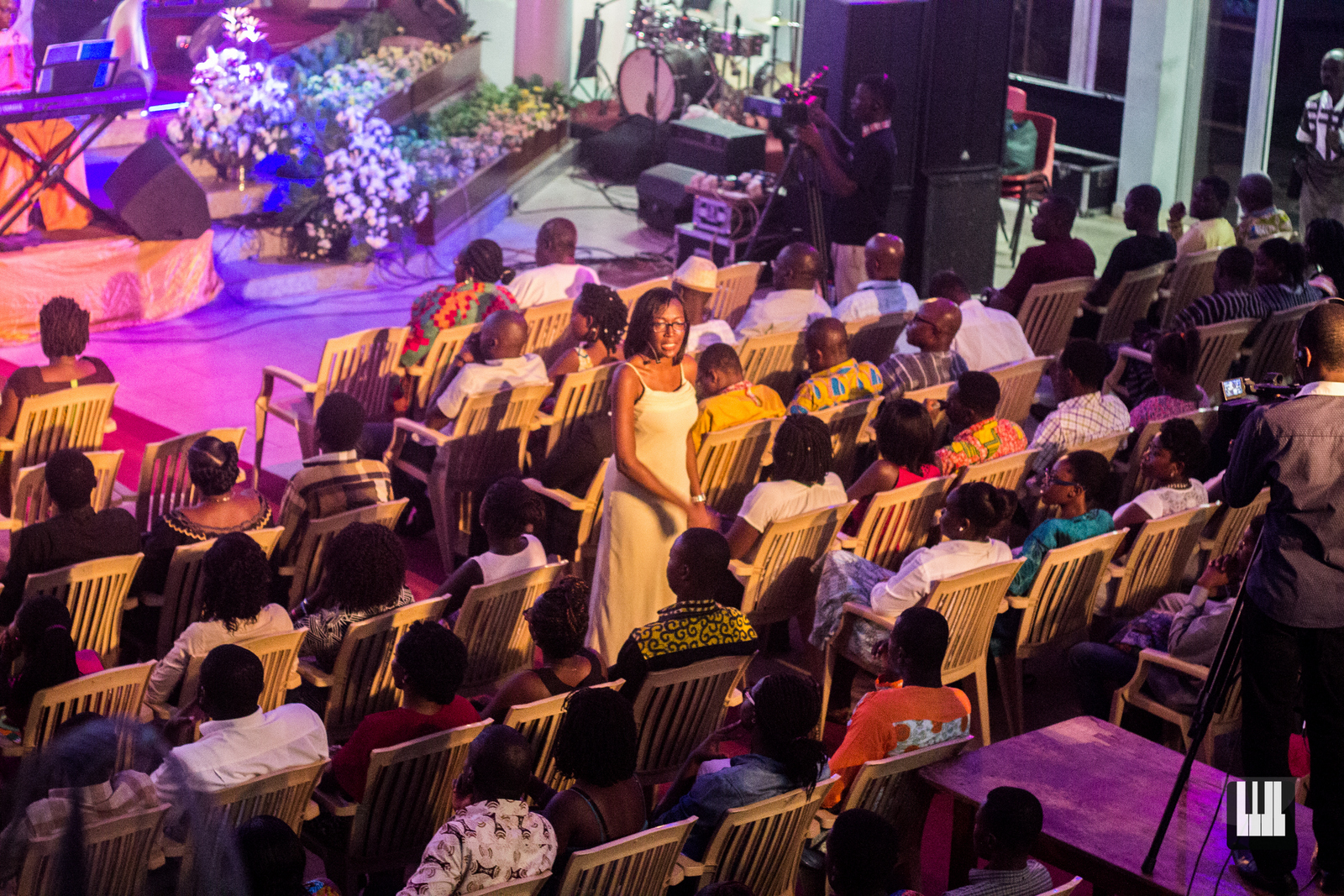 For a brief, almost cursory moment, Keni’s narration resumed with the resurrection. The audience received the traditional hymn Christ the Lord is Risen on High very well. It was notable for its staccato emphasis on the refrain “Hallelujah”. It was infectious. I almost forgot myself and joined in the singing. After this, there was a memorable performance of Crown Him with Many Crowns. Hymns seem to come easily to this choir. The confidence with which the slightly dissonant descant was executed gives me evidence of this fact.

I’ve little to say for the rest of the event. By the medley of hi-lifes, all semblance of order was lost and Fellowship of Songs 7, in the spontaneity characteristic of contemporary Ghanaian Christian worship, had more or less come to an end. The final announcements were rushed, but from what I gathered, there will be a senior citizen’s concert later this year, and Gramophone’s annual New Year Voice College, a music workshop. That’s more to look forward to, from Gramophone Ghana

One final thought on the night: I’m grateful that there was no Hallelujah Chorus. It’s time directors retired this perennial anthem and explored the many wonderful ways other composers from different backgrounds have expressed their praise to God.