Centenary Editorial: In Conversation with Nketia

Today marks a hundred years since the birth of Joseph Hanson Kwabena Nketia, a man globally recognized as an authority on African ethnomusicology, and one of the fathers of the dominant strain of Ghanaian art music. Today’s commemoration gives me the chance to revisit a conversation I had with the old professor four years ago, to draw on his celebrated wisdom and contextualize the art practiced today.

This article is one of several editorials that will reflect on the ideas he shared that day, with the aim of allowing his candid thoughts a chance to influence the present and future of serious music.

In 2017, I sat down with Prof. Nketia in an office at the University of Ghana, Legon. Our conversation took place on the morning of March 14th, exactly two years and a day to his passing. The dialog with one so influential in (and influenced by) the appreciation of traditional African musics could only tend towards some of the larger themes of his life and work. We spoke on subjects ranging from his own understanding of the art he practiced and taught throughout his career, to the interactions of different musical cultures he witnessed in the country as he aged, and some of his deepest regrets since handing over the baton to his successors. 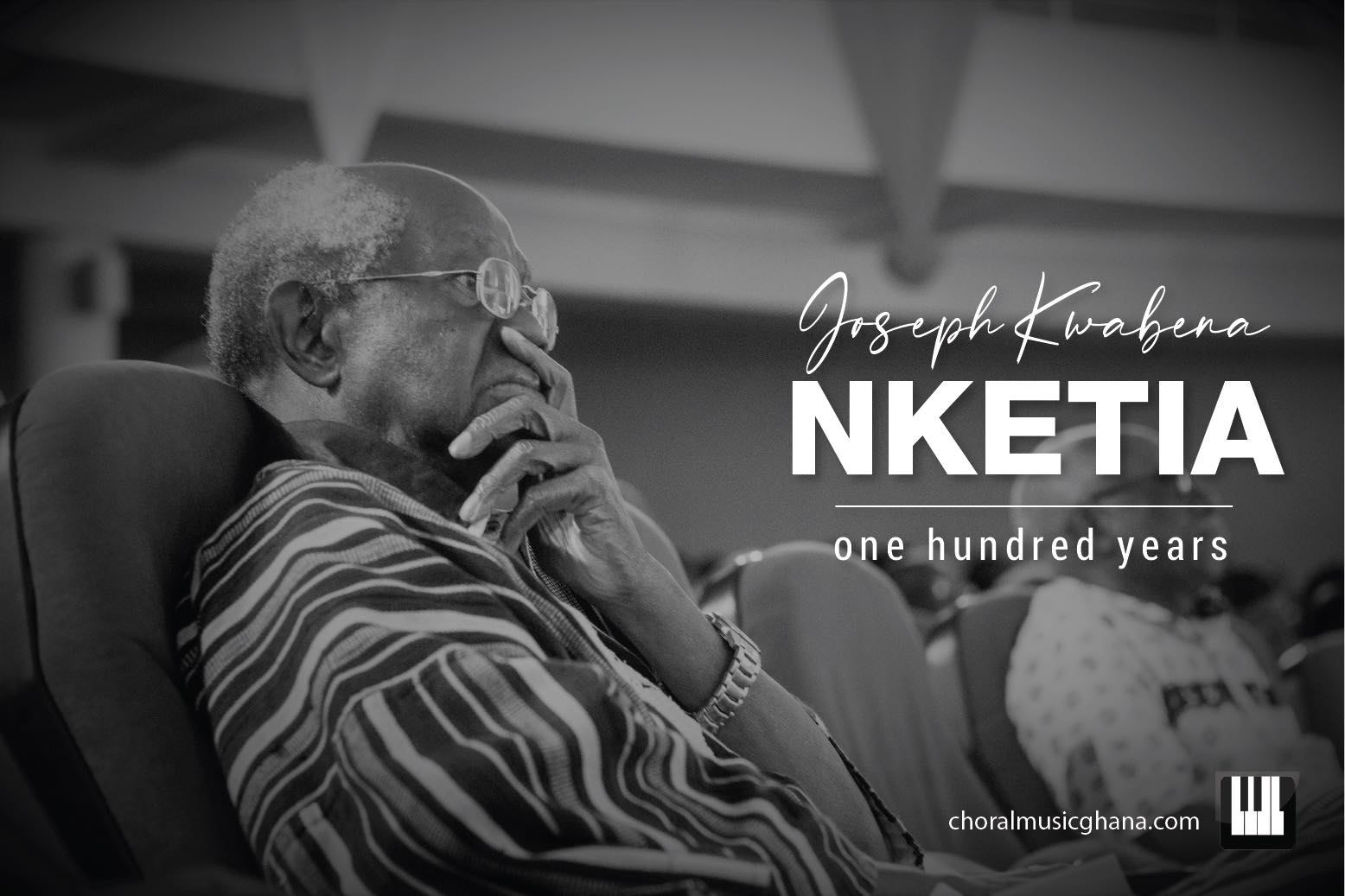 He opened the conversation by introducing his conception of culture, and the role the artist's life experience played in the creative process. In his words, “...all the things we experience when we’re growing, from our movements to our gestures, are the contents of our culture.” For one as long-lived as Nketia, his ideas of what was fit for artistic use were refreshingly open. He asserted that in the creation of music, “anything that struck you [the artist] was worth including in a work.” He did not think of it as ‘copying’, because all the elements that made up culture had been contributed into a system that was universally available, waiting to be recovered or discovered by the artist. He made special note of influences that reminded one of their previous experience as particularly useful in defining a work of culture.

Based on this belief in the many aspects of life we learn implicitly, especially those experiences shared by a community, the old professor insisted several times throughout our conversation that growing up within a culture was extremely important in producing work that belonged to that culture. The only thing which seemed to trump that “requirement”, was the artist’s sensitivity to the cultural context they worked in.

Following these explorations of what culture meant to him, I tried to probe his understanding by asking after what elements he felt defined Ghanaian art music. His response - partly a retort - was to return to his point earlier spelled out. He clarified that “Ghanaian” meant whatever we took from our present surroundings - even if those things “came from elsewhere.” His emphasis, again, was on the present environment, and what it presented to the artist.

We next tackled Western influence in contemporary Ghanaian art music. I tried to find out if he felt there was too much Western influence in popular genres like choral music as experienced by the average concert-goer (such as himself). Nketia’s thoughts on this were specific: the problem was with harmony. In his well-considered opinion, paraphrased here: Ghanaian composers had imbibed European harmony to such an extent that something of the more authentic sound of their indigenous cultures was lost - or at risk of such a fate.

For several minutes he waxed technical, arguing that the triad which forms the basis of harmonic practice at the foundation of what we call “classical music” could be thought of as an extension of our own simpler forms. He felt that such an approach was healthier, because it did not entirely abandon our original ideas about the nature and use of harmony.

For someone with such a strong opinion, he did not seem to judge the contemporary musician too harshly; their orientation towards Western harmony was not that bad, per se. Most of those writing such music had grown up studying Western music, so this phenomenon was a natural consequence of the fact. However, he insisted, at some point, the musician must realise that within the broader theoretical framework of Western music could be found elements of his indigenous art. Nketia felt strongly that the realisation of this connection was crucial.

The introduction of “theory” into our conversation led to one of the richest segues I can remember. Nketia was of the opinion that the “realisation” he had hinted at earlier underscored one of the largest cultural differences between Western and African music. In his words, Ghanaian musicians had not theorised the relationship between their indigenous forms and the Western understanding of music. It was something musicians felt intuitively, and so practiced.

Speaking broadly on the importance of such theorizing, he suggested that it allowed students of music the chance to engage with their musical tradition in an abstract way, which had some strengths.

I probed further on this lack of theory he saw, asking if he himself had done any work to develop a theoretical framework around our current conventions. He admitted that all that he was telling me was in his head; he hadn’t written it down. He revealed that he was a theoretical thinker by nature: it came quite naturally to him. However he was quick to contextualize this also, adding that theory existed to explain what was already present; that it followed from practice.

Nketia believed that some cultures leaned towards theorizing and postulating, while others rested on concrete learning from the examples of others. From this generalisation, he (almost) lamented the lack of the former tendency in Ghanaians. “We don’t talk about our music, we only make it.” It was perhaps from his point of view as an academic that he favoured the intellectual experience. He insisted that the struggle of Ghanaian musicianship was moving from mere practice to the abstract process of theorizing, postulating and exploring the foundations of our practice in that intellectual tradition.

I asked if anyone else within the field of African music education was moving towards such an approach. Again, Nketia repeated his verdict that that was the problem. Again, he admitted that he did not recall writing down all the ideas he was sharing with me. It was a theoretical system, but it was in his head. Had he written these things down, I wouldn’t have been asking him these questions. He also admitted that the theoretical approach he was celebrating was grounded in his Western training. At this point, the professor was quite scathing, saying that “Our people don’t write. They don’t bother to think about how [their music] works, although they know how to make it.”

Nketia went on to summarise our way of learning. He spoke of the gap that existed between the creator and the student. Within our traditional mode of learning, he believed, the student closed this gap by having a good ear and listening to his elders, so he could incorporate what he found from their example into his own practice. This was our traditional process of mastery, since we did not write down our ideas.

He believed the job of the academic in this setting was to provide the theoretical framework that will allow the student to do this same thing more efficiently and consistently. He called for some form of standardisation, a process which implied a deliberate intellectual step.

The old professor went on another tangent with his introduction of standardisation as a worthy point of conversation. In his words, standardisation followed theory. He believed that the Ghanaian shared the musical experience without much interest in standardising it. He generalised this observation when he stated that “the African musician depends very much on [concrete] experience, whereas the European musician depends more on the theoretical experience”, because their practice has been abstracted in such a way.

Weighing both approaches without prejudice, he reflected on an advantage of the Western tradition which allowed the student to move systematically through the formal framework. He contrasted this with our experience-based approach, which “goes into your memory, but is hard to pull out!” Nketia was quick to point out that orality was our cultural strength, in spite of its short-comings. He could not hide his amazement at how oral traditions were able to endure to such an extent that they naturally developed into a systematic tradition.

We went on to explore some of these cultural differences and how they manifested in our experience with music. He cited, for example, the case where choristers gathered to learn during a rehearsal, such that those who had never heard a song before will memorise their experience of what they were to sing from their leaders, without intellectually internalising the music in terms of intervals, etc. At this point, we shared a knowing laugh - one of several we were to have in what was meant to be our second and last extended conversation about music.

Nketia’s understanding of his culture - our culture - struck me as both well-informed and deeply empathetic. The love of the Ghana he grew up in, it seemed, had endured well into his final years. The passion which led him to pursue the understanding of his own music, and the presentation of the same to the rest of the world, was not simply an exercise in academic ambition. The laurels he earned for his life’s work - just honours for his contribution to the global appreciation of the music of Ghana - are a small part of his most rewarding journey of self-discovery and cultural assertion.