The pioneering art music program, first held at the British Council in late 2015, brought together two distinct genres of entertainment that have been making inroads into an industry dominated by pop music in recent years: stand-up comedy and Western art music.

After two successful events, Extreme Productions, the company behind this series moved the show to the National Theatre, expanded the line-up of performers and promised us that it will only get better with time.

Unlike other programs we’ve covered in the past, Classical Laughs treats its audience to a cocktail before the event proper. On Saturday night, I was pleased to find members of the Afro Maestros Orchestral Ensemble on stage, polishing up on various pieces as the audience ( who came in their numbers about thirty minutes later than I’d expected ) trickled in.

It was delightful to hear them practice, and then serenade the cocktail with perennial favourites including the Canon in D from Pachelbel, a movement from Mozart’s sprightly Eine Kleine Nachtmusik and Bach’s Air on a G String. The small ensemble present included two violins, two flutes, a viola, a double bass and Edwin Ferguson Jnr on the keyboard, as well as one percussionist.

With such numbers, the sound was not overpowering: light, almost tender, is the best way to describe the pieces that played while the audience chatted over drinks and pastries at the top of the amphitheatre. The stage itself was couched beneath one of the arcs of the National Theatre, and though it remained the focal point of the enclave that hosted us, anyone who entered the National Theatre grounds at the main entrance before discovering where Classical Laughs 3 was actually being held must have been left with the impression that this was an almost hidden-away gem; a little nest hosting a little night of music. 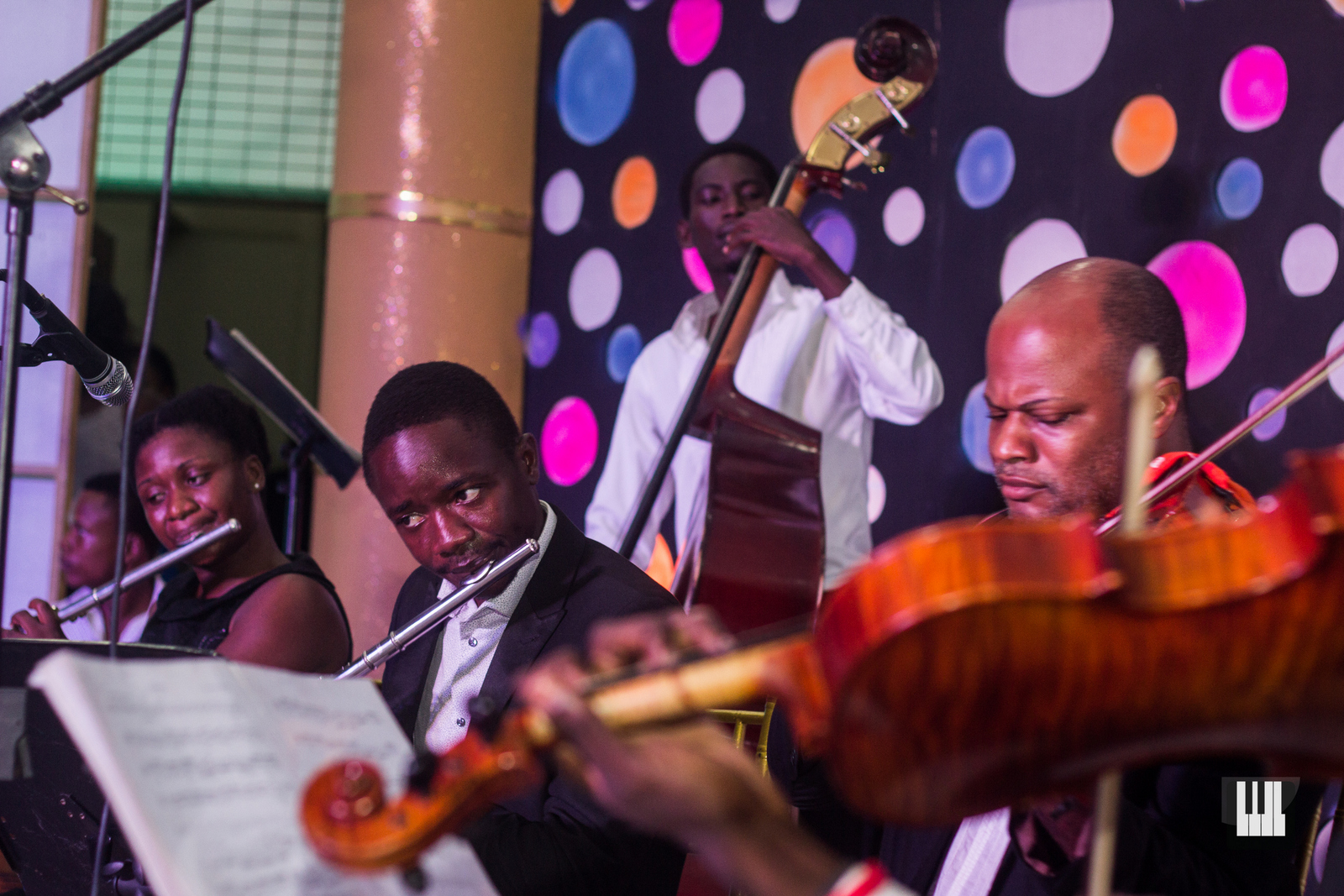 The ensemble played through these often-performed pieces from the repertoire with casual ease, which made me confident that Afro Maestros, a group I had never previously heard in concert, can arrest any listener’s attention with their beautiful musicians.

After the Western pieces, they made magic with two indigenous compositions: the first being an arrangement of Agya Koo Nimo’s Amponsah Bra and Afro Centric 3, a work by Edwin Ferguson Jnr. It was one thing to see the musicians tap their feet and sway to the rhythm of the African orchestral music they performed. It was another to turn and watch the audience dance in their seats, moved by the music. If this was all the night was about, I would have left satisfied. But there was more: the program hadn’t even started yet.

As hinted earlier, this edition of Classical Laughs expanded the line-up of singers. The first part of the event saw soloists from Vocal Essence Chorale and Grace Chorale International, the latter launching Misericordia the following night.

As I expected from the first edition of this series, the night leaned heavy on secular art music. Love songs from Mozart’s and Verdi’s operas featured. Largely absent were the complimentary contemporary pieces performed at last year, and at other events that feel programmed to “balance things out”. Classical Laughs 3 was mostly stuck in the height of Baroque and Classical Europe. I couldn’t be happier.

With all the goodness heard, the first part of the night was largely unmemorable. Yes, the singing was good, but most of the performances themselves failed to leave any indelible impression on me. Of the singers on stage, perhaps the most delightful to watch was Jerome from Grace Chorale, with his exaggerated gestures and emoting going a long way to make the words, which the audience did not understand, meaningful. If there’s anything one got from his duet, there was a lot of love and romance and heated passion. And they sounded pleasant. 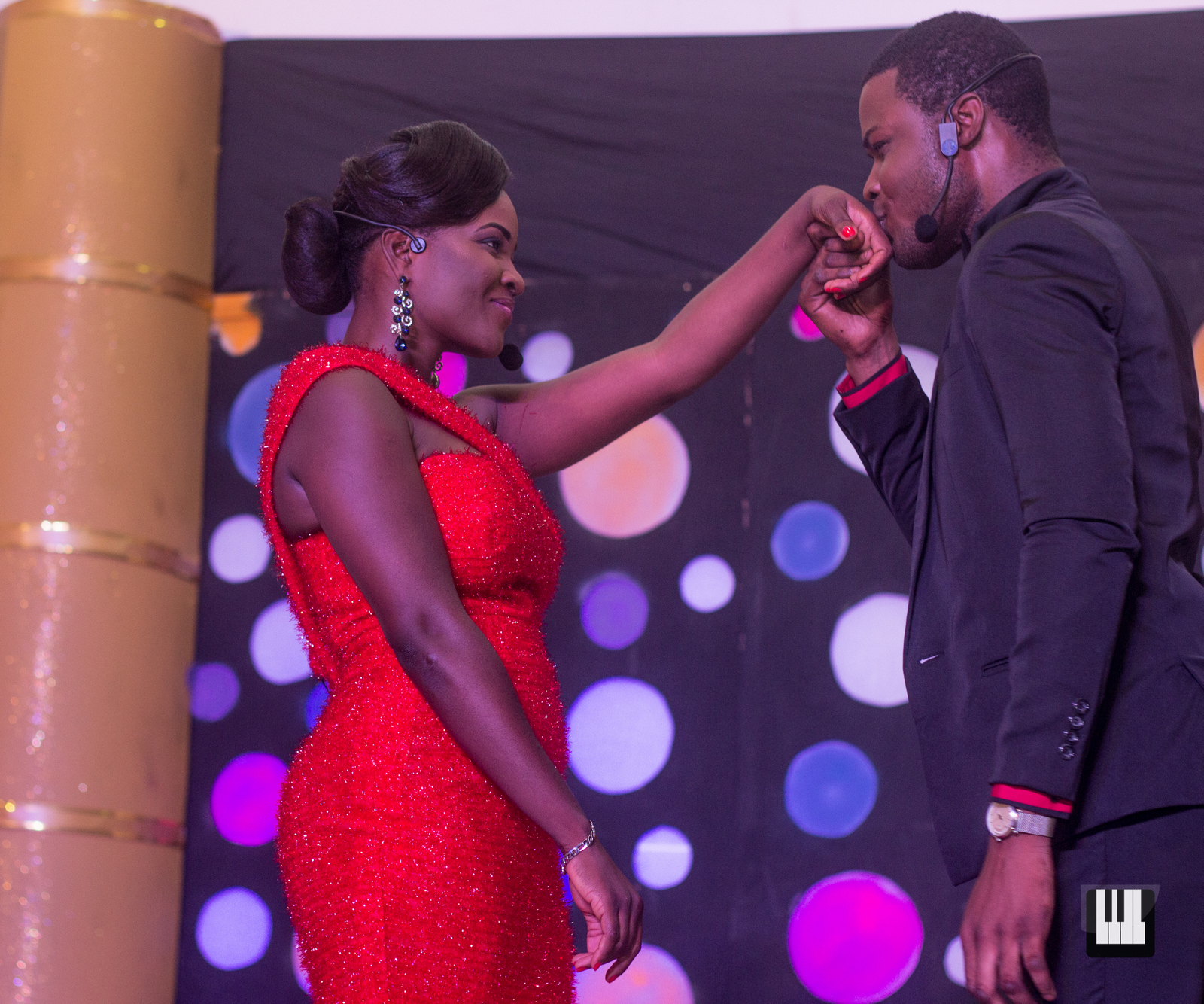 One thing that was missing was the focus on the singers. They were introduced by name, we heard a list of the songs they were about to perform before they came on stage, but I felt there were opportunities where the audience could have been more intimate with the singers and their songs. For the most part we saw people we barely knew come on stage to sing exotic music in strange languages, receive applause and leave. Of course there’s the practical matter of economy to consider: there wouldn’t be enough time to make every singer your friend before you heard what they had to say. But something to put the audience in the right frame was necessary.

I insist on the above, because that was exactly what Patrick the Trumpeter did when he came on stage to perform. And, in my opinion, his engagement with the audience turned the first part of the night around.

We’ve talked about this humble soloist in previous reviews where we’d wished he did more than repeat the cliché accents his part is sometimes relegated to in the midst of a choral ensemble. I first heard Patrick at the first Grace Chorale event we ever covered. On Saturday night, Patrick used his moment in the limelight to shine. And he did so brightly.

Among the pieces he performed were the entire first movement of Haydn’s only Trumpet Concerto and a duet with Michael, a violinist from Afro Maestro.

Next, and most daring, he stood alone before the audience and played a theme in three variations, unaccompanied. Although he failed to give us the composer and name of the piece (so those of us interested in it could look it up at future dates: why don’t people care about the after-concert experience?) he prepped the audience well by letting them know what they were getting into. As expected, the first “variation” was simply an exposition of the theme, the second a slightly more difficult variation and the final was testing.

Before beginning, I wasn’t sure how the audience will take it. The trumpet, I’m afraid, is not the most interesting instrument in the world. A performer must be really skilled in technique and general showmanship if he is to make an unfamiliar melody not only pleasing to hear, but also exciting to watch. 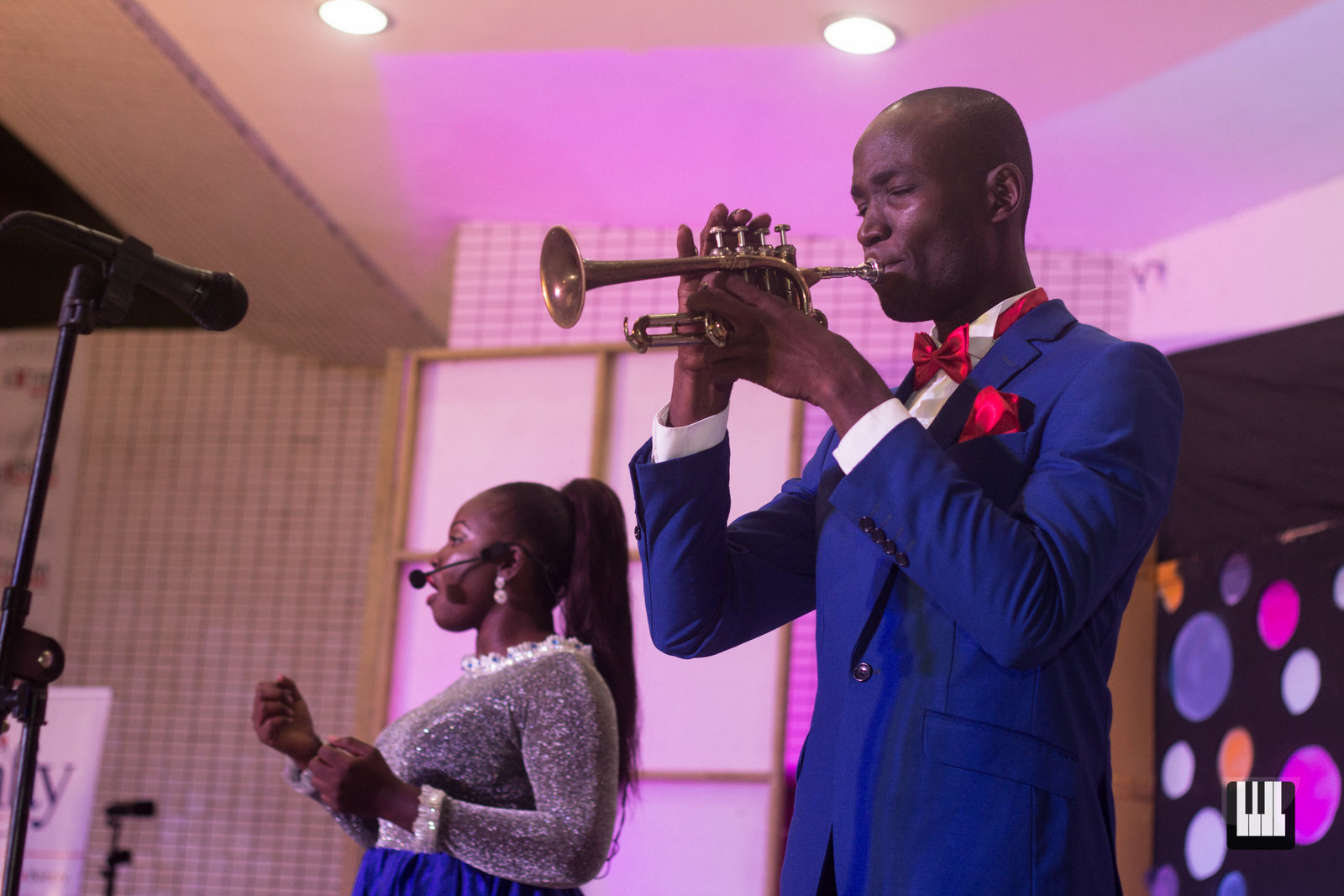 Throughout his performance, the audience was surprisingly attentive. When he got to the third variation, I noticed I wasn’t the only one at the edge of my seat. It was clear that the soloist was stretched to the limit of his virtuosity. He made a number of slips, yes, yet he plodded on through the very rapid notes of that final variation and inspired looks of concern, awe and plain fascination from the us while it lasted. And when he finally ended, and exhaled heavily into the mic, he stole the show!

And that was not all. His final solo performance needed the backing of the audience. Here he instructed us (in a manner not that different from Addaquay) to sing with him when he gave us leave. This last performance broke the divide between performer and audience, and gave new life to the music in a way I hadn't expected of a Classical Laughs event. So ended his time commanding the stage - and our hearts.

The final part of the evening’s concert featured two of Harmonious Chorale’s own: Adwoa Asiedu performed Giordani’s much loved Caro Mio Ben with such emotion I was compelled to look up the words to verify what I thought I was seeing: and yes, it is a poignant love song that could move one to tears if one were so inclined.

After this, we were taken to the familiar world of Haydn’s Creation with O Mighty Pens, a crowd favourite that was well received.

Following in the stride of this came, for the first time hearing it in person on a stage, the famous habanera from Bizet’s Carmen: L’amour est un Oiseau Rebelle. While it isn’t my place to do justice to this piece in writing I can’t help but tell it: Carmen, the titular character of that opera, is a dangerous woman. Her aria, her introduction in the story, essentially spells out the fundamentals of her character; a free and strong spirit, uncouth (for a puritanical society) and lust inspiring. If any piece of music was written to be seductive, it was those words set to this music.

Her aria is a slithering melody that teases at love and recklessness punctuated by a deafening chorus that warns us to be wary of her wiles, “Prends garde à toi!”, and otherwise hovers beneath her wild notes, echoing hauntingly her words: love is a rebellious bird, which you cannot tame. 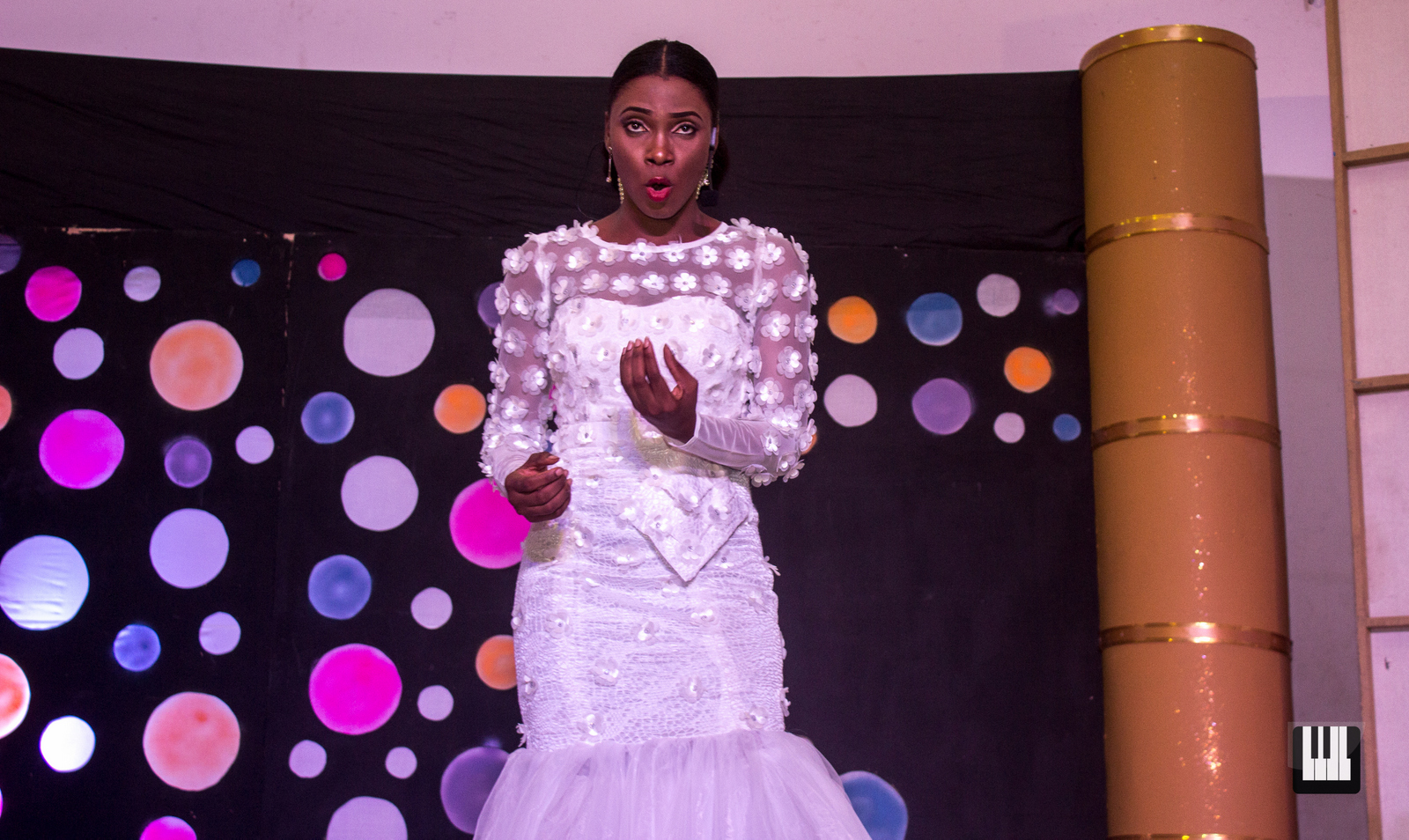 I saw none of that in Adwoa’s interpretation. The spirit of the lady longing for her lover, as sung in Caro Mio Ben, seemed to carry into this wild fantasy of sound and seduction. If anything, Adwoa’s Carmen was a much friendlier, much gentler version than what Bizet’s work may have envisioned.

The most charismatic performer of the night came last: Kennedy Dankwa, widely regarded as one of Ghana’s best bass soloists, performed Franz Schubert’s Der Lindenbaum (which he dedicated to Miss Joyce Aryee), Enrico Canio’s O Surdato Nnammurato and, with Patrick back on stage, GF Handel’s The Trumpet Shall Sound.

If Jerome’s outlandish antics did a lot to salvage the first part of the show, Kennedy stepped it up significantly with brilliant emoting and engagement with the audience; in the manner of an experienced stage performer. His performance with Patrick is one I’ve seen (and enjoyed) before at a small church concert earlier this year. To find the duo on stage again pleased me. In my opinion, they make a great team, and although the trumpet sometimes failed to hit the highest notes (I don’t know why) in that aria, that did little to diminish the pleasantness of the performance.

For a singer who can bring life to a Handel oratorio, putting him in a Mozart opera is cheating.

Classical Laughs 3 began with Mozart’s Serenade in G Major, and ended with Papageno Papagena, a joyful duet from the composer’s The Magic Flute. I should personally thank Kennedy for giving us a thorough introduction to the piece: the two lovers Papageno and Papagena, on confirming their love for each other, right away begin planning their family of little Papagenos and Papagenas in characteristic Mozartian silliness. 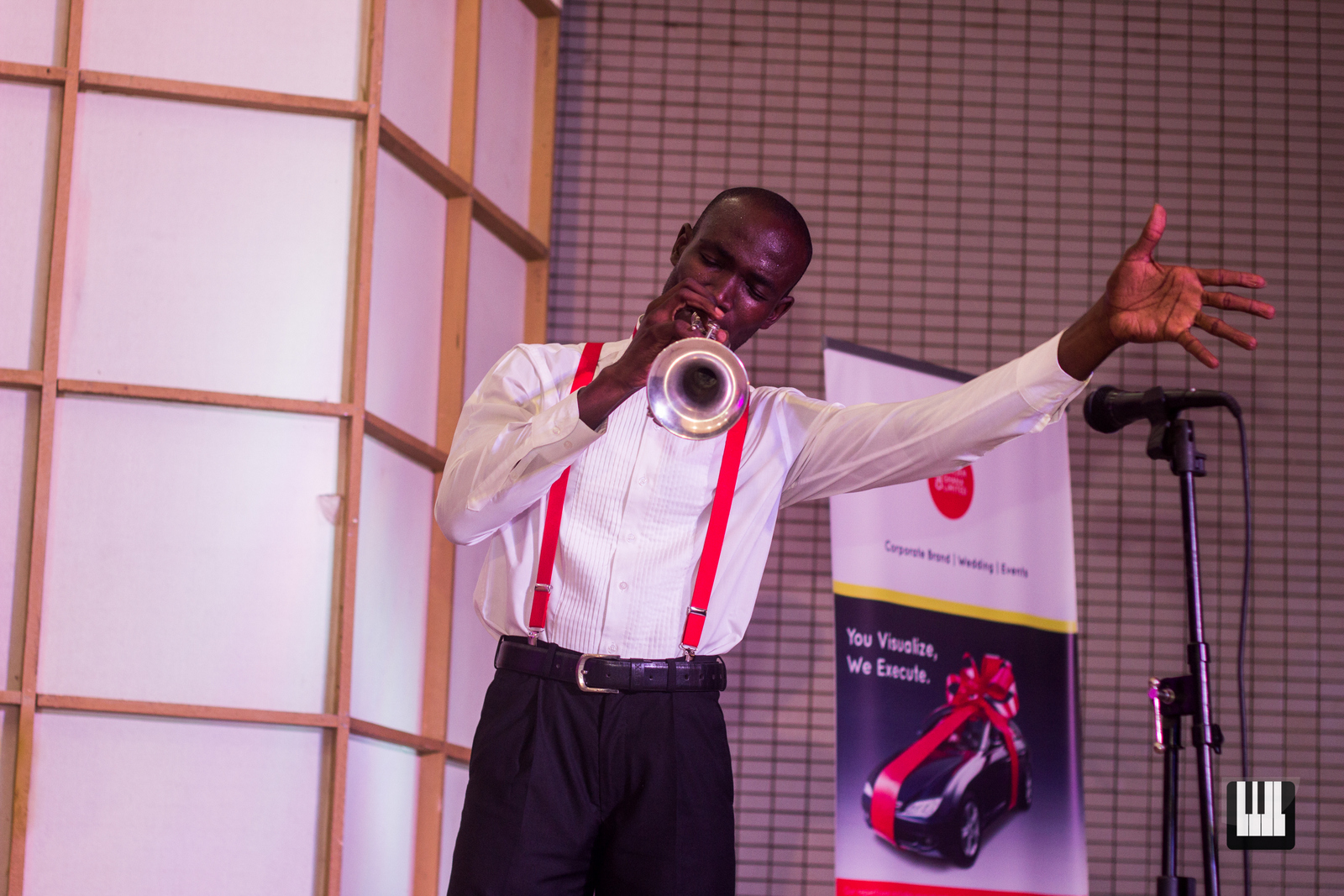 If you haven’t heard it yet, I think you should do yourself the favour. The whimsical duet, so perfectly performed by Adwoa and our charismatic Kennedy was by far the best we had seen all night. Yes, it looked challenging, and yes, the singers breezed through it with infectious joy. They remained in character right through to the end and, besides bringing this 3rd edition of Classical Laughs to a thrilling, love filled end, added one more to my growing of favourite numbers from The Magic Flute.

If the trend the CEO of Extreme Productions, Justice Lomo, hinted at continues, I expect Classical Laughs 4 to be bigger, with more musicians showcasing their best and more diverse performances from the repertoire. Good things are coming.