﻿Editor’s Note: This review is part of a series of “Look Backs” that will be published in the following weeks. Over the last several months, our team has worked on a number of concert reviews that have never been published.
Look Backs allow us to revisit these events and consider them with greater insight, while allowing our readers to relive those moments long after they have experienced them.
The University Choir, KNUST, is fifty-five years this year. As one of the most vibrant choral groups active in Kumasi, this institution has groomed several talents that are now house-hold names among Ghanaian choral music lovers. Our team witnessed Laudate Deo earlier this year, and considered the impact this choir continues to make in Ghanaian choral music appreciation.

The University Choir, KNUST, organised “Laudate Deo”, (Latin for “Praises to God”) at the Great Hall of the university campus, on the 7th of April, 2018. The concert was an oratorio “mash-up”, made up of several choruses from established works of that genre from past centuries, and other contemporary Ghanaian choral music, stitched together into a coherent contemporary narrative.

Laudate Deo is a Christian story: it followed the transition of two characters from a life of sin and worldliness to salvation and victory. During the first half of the performance, the choir was conducted by Seth Makafui Passah, the assistant music director (who was earlier this year admitted into the World Youth Choir). Clement Afrifa, the host choir’s music director, conducted the second half of the oratorio.

As accompaniment, there were four keyboardists - Frederick Kobina Dadzie, Yaw Sakyi Aidoo, David Yedonu and Paa Kwesi Bempong - four trumpets and the cymbalist Gideon Donkor. The audience was largely composed of students and staff of the university and fans of the choir. Three invited choirs were also in attendance: the UPSA University Choir from Accra, Celestial Evangel Choir and alumni of the host choir. 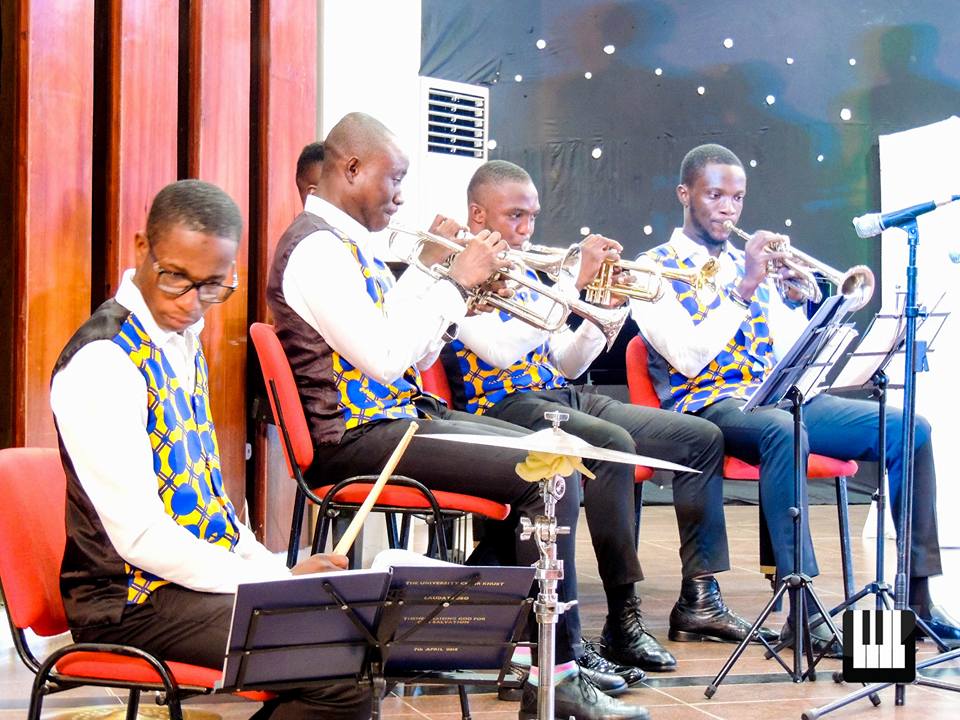 I arrived around half-past four to meet the choir and engineers during the sound check with Osei Boateng’s “Gyata Bruwa”. In charge was Richmond Nortey, composer and founder of Rasky J Productions, one of the industry’s most celebrated sound engineers. Hearing the sound check outside, one would have thought the concert was already in session.

Before the start of the concert, excerpts from past concerts and performances including The Chandos Anthems were projected to the waiting audience. At about 6:45pm, the MC, Nana Osei Antohene took the stage to announce the commencement of the event. After the opening prayer, the chairman, an alumnus of the choir, accepted his role with an opening remark.

Seth Makafui Passah arrived on stage to give an argument of the work to be performed. After this, the choir from UPSA shook the auditorium with Ken Kafui’s “Zɔdɛdɛ” and a medley of highlifes. The University Choir KNUST finally mounted the stage to begin the performance we had come to watch.

With the absence of recitatives and accompagnatos, the narrative of the work was read by Roy Aboagye Djan throughout the performance.

Laudate Deo began with Abena Dede Adonu playing the part of a “worldly girl”. She opens with a solo “Myself I shall Adore”, taken from Handel’s Semele, during which she acts out her narcissism. After this, the next character, played by Moses Torto, is introduced. Moses acts as a member of a gang of armed robbers, boasting and proclaiming his love for evil. The two flawed characters meet and enter a lustful relationship. 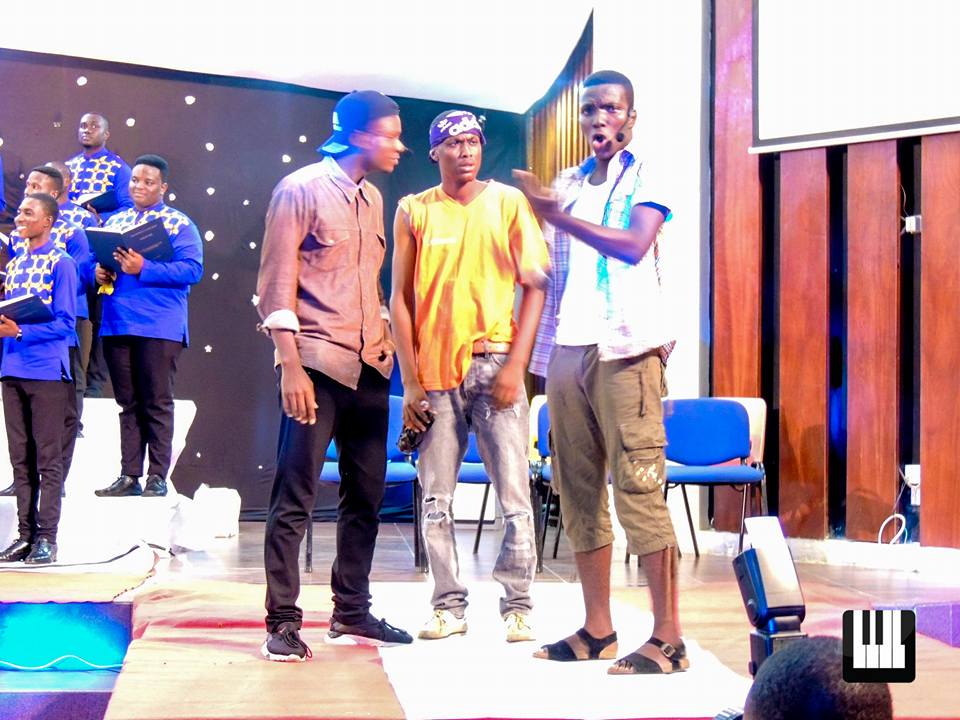 Towards the end of the first half of the oratorio, a group of evangelists preach to them and, reluctantly, they repent of their sinfulness and vanity. This first half ended with a solemn rendition of a canticle on Psalm 67.

Celestial Evangel Choir, one of Kumasi’s most celebrated choral groups, had a short session on stage with a few songs sang a capella. They surprised us with a rather comic performance of the finale of the overture to Rossini's opera “William Tell”. The entire auditorium rang with loud applause: the audience loved it. The humorous performance was under the baton of Dr. Albert Adusei Duah, and will be one of the highlights of that choir’s own major concert in Accra later that month

This set the mood for a charity fundraiser in support of the Kumasi Children's Home.

Alumni of the University Choir KNUST, were invited to the stage to sing. Among the recognizable faces were Francis Eyeson, an organist with Harmonious Chorale and Kwame Appiah Jnr, music director of the Catholic Philharmonic Choir. They performed “Sing the Lord, Ye Voices All”, the final anthem from Haydn’s “Creation” and got the audience to their feet with a medley of highlifes.

Finally, the second part of Laudate Deo got underway: the “worldly girl”, now converted, is seen on stage seriously preparing to go to church. Also in church is her lover, the former armed robber. There, they find reasons to stay committed to their new-found faith.

However, things take a turn for the worse, and they begin to question the power of God in their lives. Despite this test of faith, they remain resolved to follow through on their commitments and are rewarded generously. They eventually get married.

The oratorio ended in a series of anthems in praise of God, including Louis Lewandowski’s setting of Psalm 150, fused with a passage from Beethoven’s Hallelujah from his oratorio “Christ on the Mount of Olives”, and “Hallelujah We will Rejoice in Thy Salvation” from Handel’s Joseph and his Brethren, which saw the audience respond with a standing ovation.

There was a general sense of delight at the end of Laudate Deo, particularly of this innovation: weaving the most popular choruses from familiar works into a familiar narrative that both connected with the audience, entertained them and appealed to their peculiar tastes.

Putting together selections from various oratorios to create a new one has been successfully completed and performed in the past: Handel’s personal assistant in his later years, John Christopher Smith (Jnr), produced his “Nabal” oratorio from a compilation - and reworkings of - his master’s music.

With Laudate Deo, the University Choir of KNUST went further in testing the public’s appreciation of musical drama of this form. Its success is perhaps a significant step towards more original work in this genre. The creativity of the team behind the concert was quite commendable, though I found the narrative somewhat lacking.

This year marks the fifty-fifth anniversary of the choir that has grown to be one of the most prominent choral groups in Kumasi. It has provided the best choirs in the country with musicians, choristers and soloists as well as aspiring composers.

The concert which launches the choir's anniversary takes place a few days from this publication. I expect it to be one more page written by this generation of choristers which will add to its celebrated legacy of achievement. I am also convinced that Ghana’s choral music lovers are ready to accept musical drama. The University Choir, KNUST is among the major choirs that have placed greater emphasis on drama in their musical offerings. This is a trend we’re confident will spread throughout the community.