On Friday, the Music Department at the University of Ghana concluded three days of end of semester performances with a concert that featured the brass, string and choral ensembles. The three days of shows are an academic exercise – part of their end of semester exams. For Choral Music Ghana, it was an entertaining peek into the innovative work of the department.

The show started thirty minutes behind the stated time, and that was a good thing. Cheryl and I were running late and would have missed the first performances of the brass ensemble had the event started exactly at 6:30. We made it just in time to get comfortable before the introduction by two student MCs and the Head of the Department.

The concert was held at the Efua Sutherland Drama Studio, a short walk from the Legon School Gate. It’s an open air theatre with dingy stage. There weren’t many people in attendance. Harry Ballard later observed that the crowds were much larger and significantly more enthusiastic on Wednesday and Thursday when the pop and African ensembles performed. 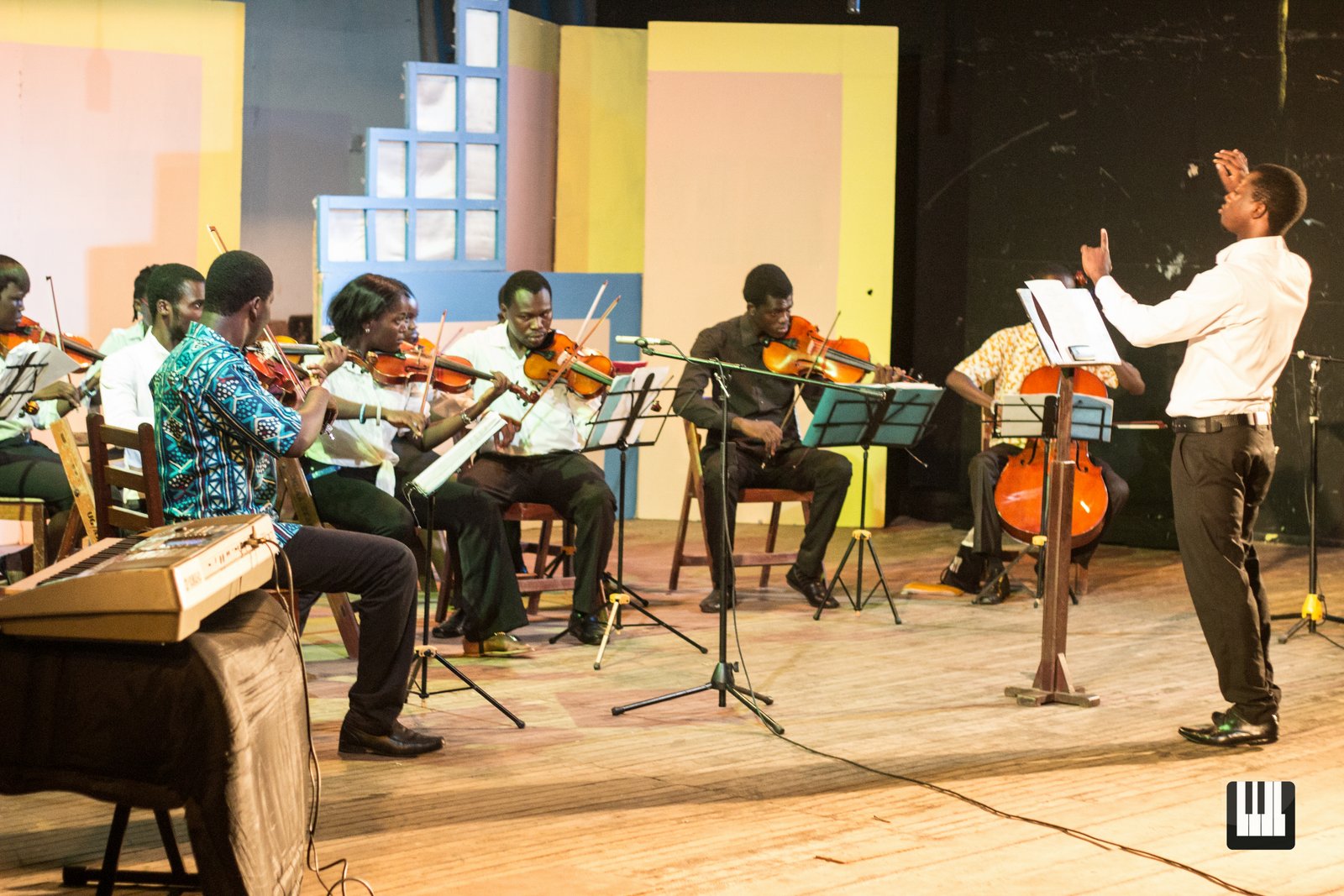 That’s understandable: choral and classical music doesn’t have the massive following other forms of music have, especially among students. But the audience, given what they were present to hear, was impressive.

The first shock of the event came when I realised that we were at a school function, dominated by students who’d rather behave like — students. I’ve been out of school for two years and I’ve quite forgotten what such an audience acts like.

After the brief barrage of cat-calls and whatnot, the brass ensemble finally settled on the stage. I got my trusty camera out and started work. The night had begun.

The brass ensemble was an all-male affair. We had a mix of trumpets and trombones, a boisterous tuba and a French horn played by our own Harry.

I felt the brass ensemble excelled when they performed Eleagbe Lo and Days of Elijah. The other performances, while good, sounded frightfully off key. The music was spirited and the dedication of the students showed itself when they played two popular Negro Spirituals – By the Rivers of Babylon and Joshua Fought the Battle of Jericho.

The string ensemble was the next to take the stage. Most of them were in black and white uniform.

The first bars of their performance worked a miracle on the audience. A hush fell as the music progressed. The unruly bunch were calmed to murmurs under breath while the ensemble took off with the Air in F from Handel’s Water Music. I put my camera aside when I recognized what they were playing – my absolute favourite piece of Baroque music, and settled into my seat to listen and observe the musicians. That was the most remarkable moment of the night. Did I mention I’ll have it performed on my wedding day? The music department of the University of Ghana has talent, and I witnessed it on Friday night.

Granted, the piece is relatively simple so the small ensemble did it justice. The more challenging Air from Suite in D by Bach tested the musicians. They laboured through the piece but it remained quite enjoyable.

The next performance was the first and third movements of Mozart’s remarkable Serenade in G from his Eine Kleine Nachtmuzik (the pun is not lost on me). I imagine this piece to be as challenging as the last, but the ensemble did a much better job executing it. It was so good, I had to leave my seat and stand close to the stage because the gentleman beside me couldn’t help but hum along.

Nonetheless I was impressed with the audience discipline – I actually forgot I was in the midst of students during the second set of performances of the night. It must have been the strings. It must have.

The next two pieces were extremely well done: the Coro and Hornpipe in D, again from Handel’s Water Music. I’ll admit that these weren’t professional musicians, so it will be unfair to expect so much from these performances. However, for a little night of music with students at the university, it was exciting. The string ensemble were on point for botching Bach’s Air and the Edelweiss from the Sound of Music.

The last, largest ensemble was the choir. I didn’t bother counting with a headcount. They were dominated by female voices. I was looking forward to the choir since the program was handed me. All the music they performed was either written or arranged by Ghanaian composers, some from the music department itself.

The most memorable performances of the night were Robert Mensah – a song dedicated to the death and legacy of the Ghanaian goalkeeper who died in a bar fight in Tema, Me nim nea menya (James Varrick Armaah), Se Enyina Adedende and Newlove Annan’s remarkable arrangement of Sansa Akroma.

The night was ended with Frank Laing’s Aburo Ndwom, a song about the kinds of food you can make with corn.

The choral performances were by far the most innovative. Although I expected more original music from students in the department (I don’t know exactly how they work…) I loved two things about it. First, the choral ensemble experimented with different styles (for the first time, Mr. Laing told me after the event), fusing rap and choral music in As-Salam Alaikum. You can thank the rap soloist for reminding us that Alaikum Salam rhymes with Boko Haram. Second, I was delighted at the sort of things they chose as their subjects – corn based meals don’t come to mind when you think of classical and choral music.

They surely lit up the night with their innovative effort and thirlling conclusion to a splendid Friday night.