On the 2nd of July, 2018, VocalEssence Chorale, directed by Gordon Quaye and accompanied on the keyboard by Edwin Ferguson, Emmanuel Hemans, Andrew Addy (Executive Director of Music for the Choir), Obed Nyantakyi and Kras Arthur Jnr performed Handel’s Judas Maccabaeus.

This oratorio is popular in Ghana because of its powerful choruses such as “Sing unto God”, “Hallelujah! Amen!”, “See the conquering hero come” and arias like “Arm Arm Ye Brave”. George Frideric Handel composed this oratorio in 1746 to compliment the victory of Prince William Augustus, the Duke of Cumberland, after the Battle of Culloden in the same year.

The complete oratorio has been performed before in Ghana by Accra Ridge Church Choir in the 1970s. Other high profile performances include one by Pax Choir KNUST in the early 2000s. As there has been little or no evidence of previous performances, we can say for the “youth revolution in choral music”, VocalEssence Chorale’s is the first recorded performance of this sacred oratorio in Ghana we have witnessed.

The dramatic potential of this work was less emphasised as compared to the last major Handel performance we reviewed: the near operatic “Joseph and His Brethren” production by Harmonious Chorale last year.

The event started at 4:30pm (the stated time) when the MC, David Odartei Lamptey invited a soprano soloist, Tokoni Thomas to perform as an opener for the oratorio. She was accompanied by Paapa Bosompem (of Glorious Chorus) as she sang “O sole mio” and “Alleluia” by Mozart. After that performance, there was a repeated video display of advertisement by one of the sponsors of the event for about 15 minutes followed by a playback of hymns while the audience waited patiently for the oratorio to begin.

At 5:07, the MC mounted the stage again and invited a Tenor soloist, Isaac Ankrah to perform. He performed “The Lord’s Prayer” by Albert Hay Mallote and Rossini’s “Ames amis”. He was accompanied by Amos Tetteh, a pianist with Accra Symphony Orchestra.

After this splendid performance, an opening prayer was given and VocalEssence Chorale graciously walked to the stage arrayed in beautifully coloured dresses. The ladies were dressed in yellow gowns while the gentlemen wore blue jackets, blue pair of trousers, white shirts and bow ties. Among the singers, two of the ladies playing the role of the Israelitish Woman and Israelitish Man wore diadems, and the main character wore the outfit of an Israelite soldier. 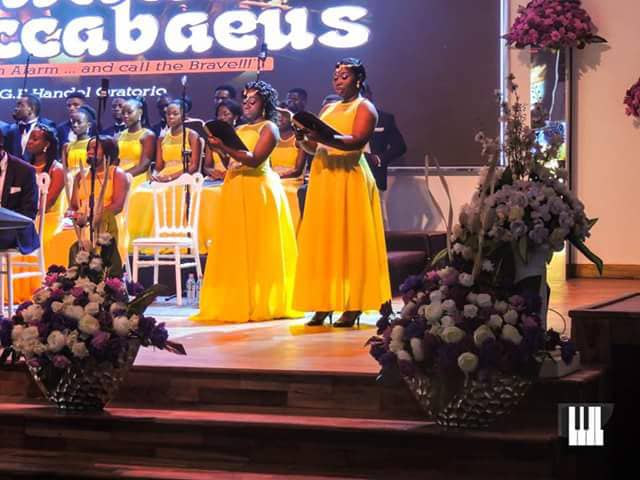 The overture to Judas Maccabaeus begins with a largo as specified by the composer. In many recordings, you would notice this direction is ignored and the notes are quick. The keyboardists for the night obeyed the direction of the composer. With this effect, one could feel the emotion of sadness, wretchedness and dismay of the Israelites in captivity. This is obviously an evidence that VocalEssence Chorale is not a follower of the crowd.

The Israelites then pray acknowledging the sovereign power of God and asking Him to grant them a leader to save them from their captivity. The choir sings “Oh Father, whose Almighty Pow’r”, a chorus with very noticeable diminuendos and crescendos done beautifully. By this time, everyone in the hall was melancholy, except for those few who used the time to chat with friends and disturb other listeners.

Simon cast as Francis Nyamekeh, a renowned bass soloist, charges the people of Israel by telling them, “Arm, arm Ye Brave”. He used a form which has never been used in performing this piece. The aria is in three sections; an introduction, a bridge and restatement of the introduction. Nyamekeh’s dramatic performance exploited this structure by beginning with less aggression and in a lower tone, before bursting with strength at the repeat of the first section. Following the rise in energy, the choir burst into a startling “We come in Bright Array”,

Judas, played by Prosper Afanu, steps up calling that God anoints him with the courage and powers of his predecessors. At this point, Israel is hopeful and urge Judas on. Part one ended with choir singing “Hear us, O Lord”.

Part II begins with the choir singing “Fall’n is the Foe”, after victory over Samaria. The chorus and soloists sing songs of victory, but this joy is short-lived after Comfort Okine as the First Messenger announces that Antiochus was getting ready for battle against Israel. Israel sings of their wretchedness and fear of annihilation. Judas rekindles their faith and courage and urges them to be brave and follow him to battle. The Israelites with one accord oblige to follow him to conquest. They also declare that they will never bow down to idols, ending the second part.

After an intermission during which the sponsors of the concert were introduced, Part III began with the aria “Father of Heav’n”, sang by the Priest. Cyril Alexis Otabil plays this role and consecrates the altar which had been profaned by idol worship. God is with them through battle and they come out of war victorious. They hail their leader, Judas with the famous “See the Conqu’ring Hero Comes”. The First Messenger and Second Messenger lead the chorus in a song of praise to God. The oratorio ends with the chorus “Hallelujah! Amen”. The audience responded with a standing ovation and a loud roar of applause for VocalEssence Chorale. 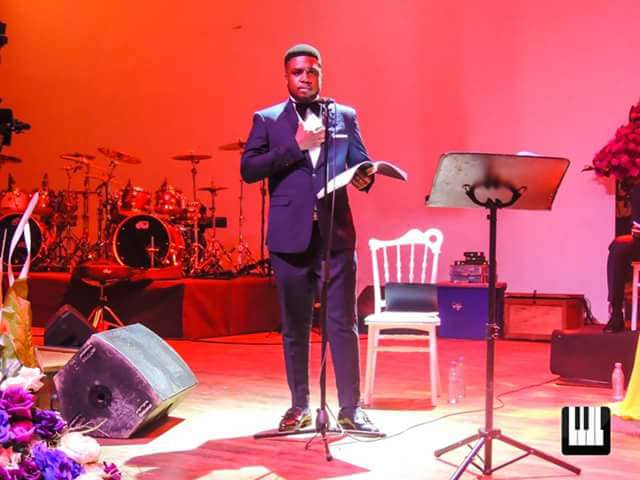 The Choral Music Ghana crew spoke to Kwabena Asante (tenor part leader) who sang the tenor solo for “Sing Unto God” splendidly. He said, “It was great. Personally, this is my first time of being part of a performance of an oratorio. I feel so proud of my choir and myself. To God be the glory. Greater things he is about doing for us”.

This was indeed a splendid performance. I believe VocalEssence has the quality we are looking for in choral music and they can rub shoulders with the likes of BBC Symphony Chorus and some of world’s most prestigious choirs. The evidence of this was the choir's interpretation of the composer's mind and how they controlled the emotions of their “true” audience.