On the 4th of August, 2019, we witnessed the Wesleyan Symphonic Choir’s second performance of Handel’s Samson at the Christ the King Parish Hall. This followed an earlier performance at the Word of Life Assemblies of God Church, in Takoradi. The production was directed by Frank Bonsu, with accompaniment from four keyboardists and three trumpeters.

Samson is a three-act oratorio composed by Handel in 1741. It was his first oratorio written after the very successful “Messiah”. It is believed that Handel inserted himself into his latter oratorios. An instance of this can be found in the “Total Eclipse” aria, in which Samson laments his lost sight. The composer was blind at the time, and the aria left the audience - and Handel himself - in tears during its performance. 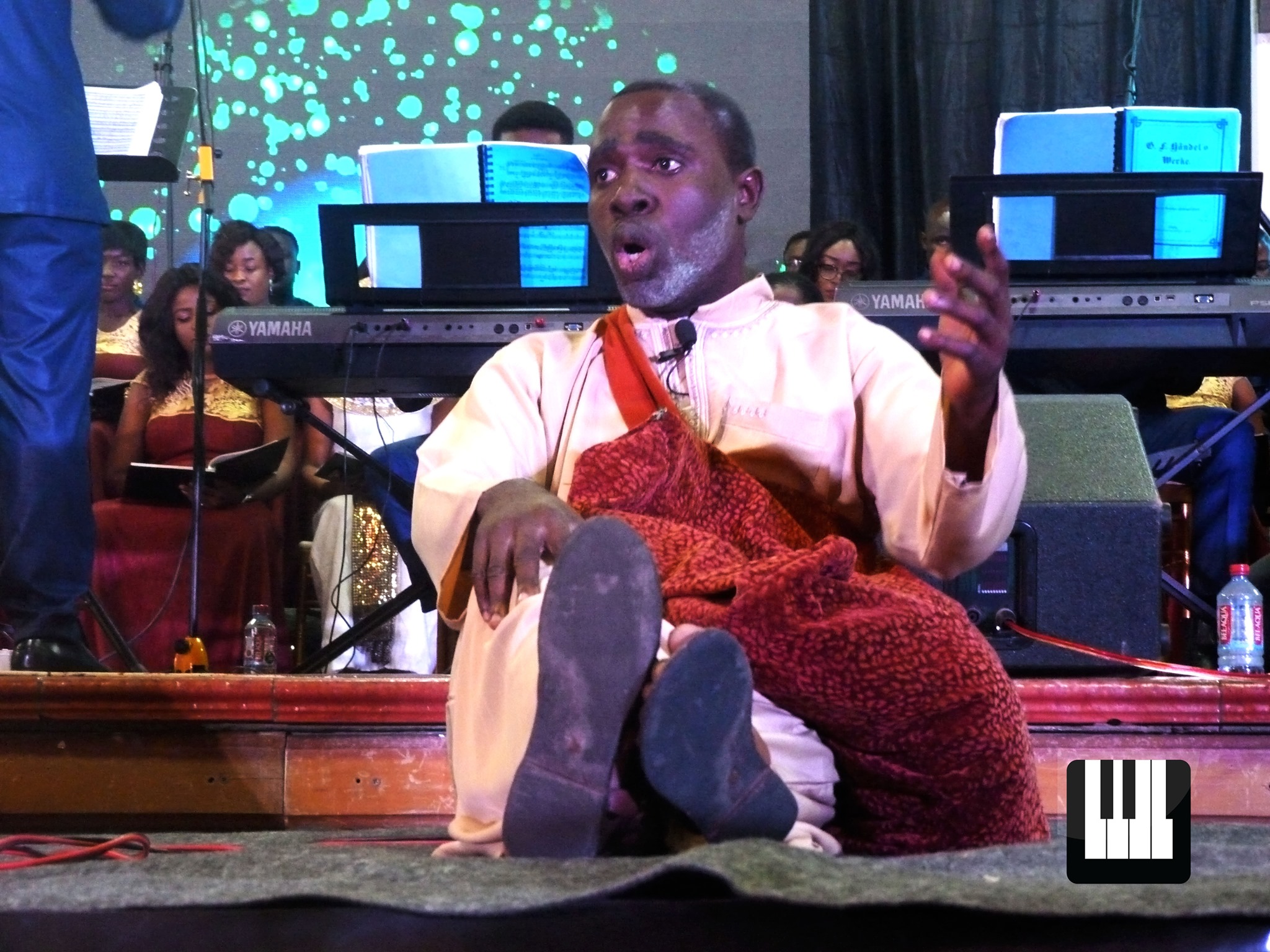 The libretto of Samson was written by Newburgh Hamilton, based on John Milton’s dramatic poem Samson Agonistes. The Accra performance starred Eugene Osae as Samson and Rosemond Grant as Dalila.

Right off the bat, the creativity of this production began to show itself. Whereas we had expected the four keyboards to play the overture before experiencing any drama, this production took advantage of the opening movement to fill-in some backstory. We watched Dalila get Samson drunk and cut off his hair while he slept, robbing him of his strength. We saw Samson captured and thrown into a dungeon. Besides sparing us the chore of staring at the keyboards mimic a traditional orchestra, this brilliant move allowed the overture to quite literally set the stage for the first scene.

Samson begins with the titular character blinded and in chains. The chorus of Philistines celebrate a festival in honour of Dagon, the god of crop fertility with “Awake the Trumpet’s Lofty Sound”. Mavis Gyasi, a Philistine woman, sings “Ye men of Gaza”, urging the Philistines to praise Dagon. Unlike other versions we’ve heard, Mavis’ fluid use of crescendos and other dynamics significantly increased the expressiveness of this aria.

After a rather loud “Awake the Lofty Sound”, Samson begins to lament his predicament as he is beaten by the prison guards. Eugene’s acting was almost entirely non-existent, which though quite pardonable given the nature of his lines, was a damper on the occasion.

One character who earned the love of the audience was Manoah, the father of Samson, played by Kwao Annan, a bass soloist. Kwao’s tendency to face the audience and speak to them of the tragedy of his character’s son: a failed hero of the Israelite state, proved effective.

After a long, repetitive speech from the MC with the main characters on stage, the second act began. Whereas the text of Dalila’s aria “My faith and truth” suggested an attempt to woo Samson, the interpretation failed to capture the image of a seductress. After the rather poor attempt at seducing the failed hero does not succeed, Dalila and the Philistine woman attempt to appease Samson. Their duet, however, sounded disparaging of the prisoner.

On the topic of duets, one highlight of the performance was a duel between Samson and Harapha, a Giant of Gath, played by Gilbert Mensah. Gilbert’s charismatic portrayal of the boastful Philistine gave life to the scene which saw Harapha challenge Samson to a duel.

When the protagonist urges him to call on his god, the chorus is divided between the two opposing sides, with the tenors, altos and bass singers crying out to Jehovah while the sopranos sing with Gilbert to the Philistine’s god. This brief revelation of Handel’s sense of drama was exciting to watch. 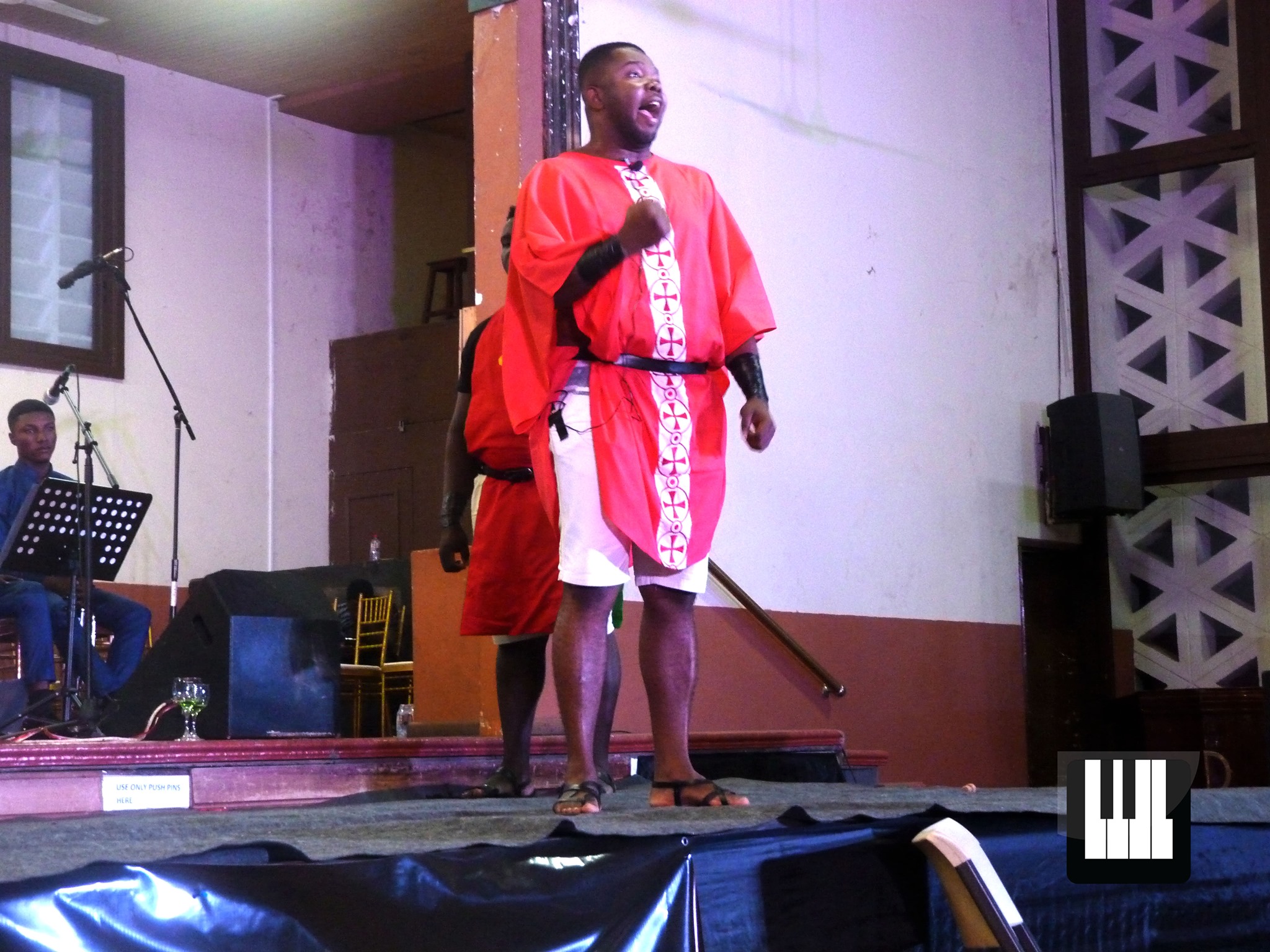 After a fundraiser, the oratorio was brought to its tragic conclusion. Before the final chorus, Ekua Kwansema Yorke, cast as the Israelitish woman, sang “Let the Bright Seraphim”, an aria that is frequently performed on its own at concerts in the country. We weren’t exactly pleased with the quick tempo. Despite what may be suggested by the text, we felt the joy could have been communicated using the composer’s own andante suggestion. The aria was also cut short: we’re still not sure why the soloist ignored the da capo at the end of the bridge, and it left us with a feeling that something was not quite done.

The final chorus, “Let the Celestial Concerts” was met with a standing ovation.

We felt the production could have benefited greatly had the acting been above par. Musical drama such as this requires more than pleasant singing, and this was blindingly obvious to those who witnessed the Accra performance. The individual brilliance of choristers such as Ato Kwamena Essel Jnr and Kwao Annan speak to a promising future for musical drama. And Handel’s works may pave the way to increasing the interest in such works.