The story of this year’s Pax Choir National Choralfest can be summed up in one observation: the audience was on fire. The nearly five-hour event left us exhausted and excited about the enthusiasm shown by many young people, and the possibility that interest in art music in Ghana will last for a long time.

Once every year, various Pax Romana Choirs in Ghana; tertiary choral ensembles from the body of Catholic students, congregate at a host university to celebrate a national festival of choral music. This year’s host was the University of Ghana, and choirs from five other universities; the Catholic University College, KNUST, University of Education (Winneba), University of Mines and Technology and the University of Cape Coast, joined the throng at the Central Cafeteria, on the 25th of March, 2017.

The National Choralfest is the highest profile event on the musical Catholic student’s calendar. Most Pax Choirs hold a smaller-scale “Local Choralfest” event on their campuses before gathering for the national event. Earlier this year, Edmund Abrokwa and Ijeoma Iwuafor, both of Choral Music Ghana, reviewed the Local Choralfest at KNUST which saw James Varrick Armaah and Reverend Enninful share a stage in Kumasi.

As Pax Choirs are amongst the most vibrant tertiary choral ensembles in the country, the national event draws in numbers from the current and past student bodies, especially those from Ghana’s celebrated public universities. It was no wonder that the largest auditorium on the University of Ghana campus was selected to hold six choirs and their raving fans. And even that wasn’t enough.

The first thing one would have noticed at the Central Cafeteria on arrival was the fanfare atmosphere around the venue. Concert-goers in the country may be used to a calmer, quieter atmosphere preceding the events they attend, as audiences usually trickle in right before proceedings. However, the buzz of excitement that surrounded the Central Cafeteria that afternoon showed how the National Choralfest serves as a reunion-of-sorts for alumni from the public universities.

The excitement seen at the event preceded it by several weeks, with the hosts and visiting choirs keeping up the momentum on social media. Significant sponsors, such as CitiFM, the Cocoa Processing Company and the Daily Graphic ensured that this event was sufficiently publicised and supported by recognisable brands. The ingenious publicity of the host choir definitely caught my attention. The level of attendance on the day of the event lived up to the buzz generated in the run-up.

Choralfest 2017 started with an opening prayer and address by the President of the host choir, Mr. Benjamin Nikoi. Pax Choir UG, the hosts, provided a lengthy opener before the event proper began. 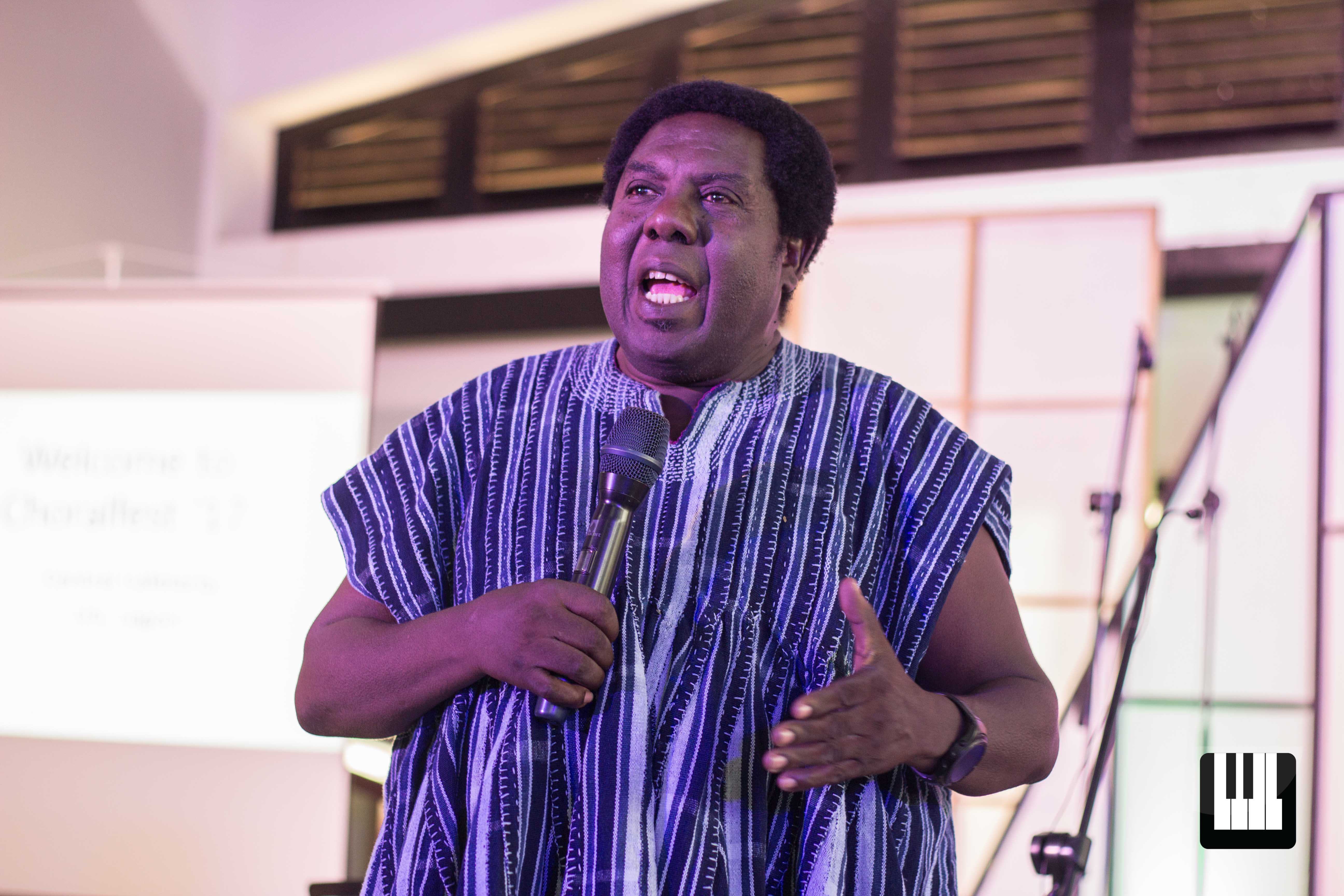 Of the honoured guests in attendance, Dr. Kenn Kafui, composer of Mida Akpe and Dzidzorm, two widely performed choral works, gave an extended address on the important role the Roman Catholic Church played in the development of Western art music, from which our own style of choral music has emerged. Kenn Kafui briefly traced the development of Western music from the relatively unsophisticated Gregorian Chant, through to the flourishing of intricacy at the height of Baroque Europe. His address, not lingering on what we already know, touched on some of his own observations of the developing contemporary style of choral music in the country. He highlighted such things as the pervasiveness of the electronic keyboard and how it enables small ensembles to mimic entire orchestras, with each synthesizer emulating one main section of your standard orchestra.

After the acknowledgement of history and his nod to the making of new history, the music began. Each choir was allotted twenty minutes for their performance. A cursory glance through the program didn’t reveal any significant leaning towards the music of a particular place or period. The selections for performance were fairly standard for anyone who has paid attention to Ghanaian choral music concerts for a few years: pieces from Handel and Haydn oratorios, old and contemporary English church music and Ghanaian anthems and highlifes. What was quite impressive was the presence of young composers such as Samuel Yawson and Dennis Adusei (both of Pax Choir UCC, which performed Yawson’s Mida Akpe and the latter’s Osee ye!) and Albert Adusei Dua, a young Catholic musician and medical doctor based in Kumasi.

Among what was noteworthy in this year’s performances were the contemporary pop songs performed by the Catholic University of Ghana and others. Their selections seemed to lean less on what we’re familiar with in this setting, and more on the “gospel” style of music typical of pop choirs in the country. Their performance suggested, to me at least, a warming up to choral pop music by the community. I’ve noticed the trend in other places as well, so there might be something to the observation.

The second highlight from the performances came from KNUST’s selection. They were the only choir to sing from a mass,and they chose the delightful Credo from Mozart’s Coronation Mass in C major. That Credo caught my attention the first time I learned it with the Saint Thomas Aquinas Youth Choir. I was intrigued by the uniqueness of the idea: a single chord from the chorus announces the first words of the creed, “Credo in unum, Deum in unum”, with a rhythmic motif. At crucial moments in the music, that thumping motif re-emerges from the tumult of the chorus, either shaped by dynamics or with little movement in the voices. The fact that Mozart, famous for his catchy tunes, chose for this Credo to rely heavily on a rhythmic rather than a melodic idea is what I find most interesting about it. 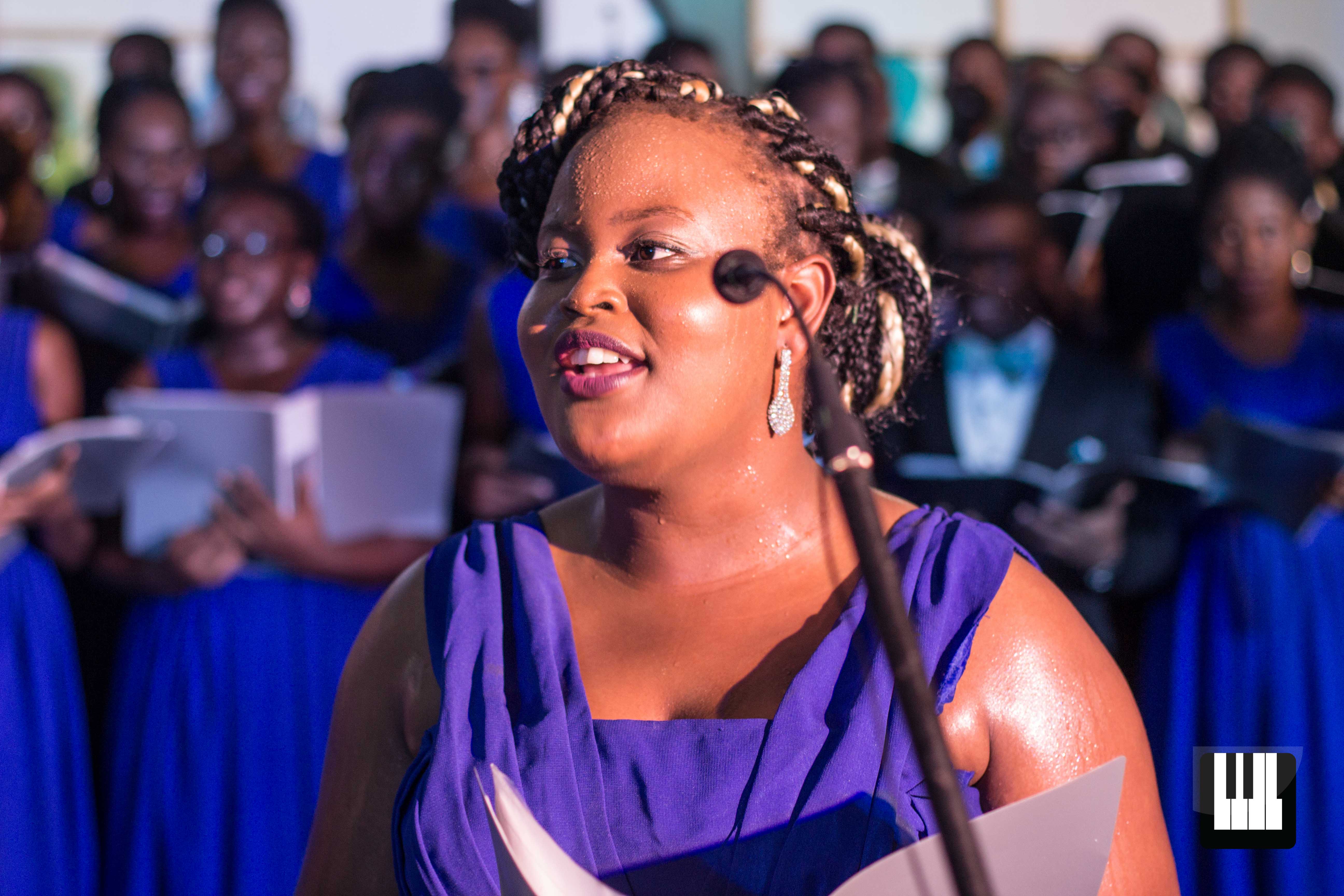 Of course, having performed it before, I listened with keener ears to how my former choir interpreted one of my favourite Mozart works. It was a fairly good performance. The dynamics that go along with that thematic rhythm were well executed. The sensitive mics did not favour the three soloists at the delicate moment when they first enter. At the mass’s most poignant moment, the performance could have exaggerated the change of mood more.

Generally, I felt the performance seemed to lack some of the playful nimbleness I have come to expect in the interpretation of Mozart’s work. And this is a crucial point for me. I’ll admit the composer leaves little room for his characteristic gestures in this movement, but there are brief moments where his spirit can be made to shine. Pax Choir KNUST’s performance was a grand affair, as “serious” as their regal attire suggested, and as powerful as one would expect from a choir that fielded a number so large they barely fit the stage. It was, after all, a “Coronation” mass.

It was about this time that I too began to notice what others definitely felt earlier: the room was noisy. It wasn’t apparent that you could hear some disturbance in front, but I was not the only one who felt too much activity going on behind me during the performances. It may have had something to do with the heat. I had a comfortable spot to observe everything from, but those less fortunate definitely did not have the best of listening experiences.

The third significant observation from Choralfest 2017 was just overwhelming. This came from the Pax Choir at the University of Mines and Technology, from Tarkwa. Their last selection was Emmanuel, an anthem based off of Tony Britten’s UEFA anthem, itself based off of Handel’s Zadok the Priest. Emmanuel is a composition by Albert Adusei Dua, music director at Celestial Evangel Choir, based in Kumasi. This song is the latest evolution in three generations of musical tradition, beginning with Handel’s famous anthem that has seen the Kings and Queens of the kingdom crowned since it premiered at the Westminster Abbey in 1727.

From the courts of British royals, the spirit of the coronation anthem was carried by Britten in his 1992 composition for the UEFA Champion’s League. The anthem, Britten’s most famous work, has been heard since 1992 by millions of fans of the world's highest profile continental soccer tournament.

Although this anthem is familiar with most Ghanaians, it was Albert Adusei Dua’s clever reworking of the lyrics of this piece that quickly brought it into the heart of Ghana’s choral music experience. When the keyboards began playing the famous opening lines, the audience erupted into a frenzy. It felt as though the fanaticism that seizes soccer fans spread throughout the crowd. But this was of a distinctly religious flavour. Most people responded like adoring fans at a rock concert would - arms raised in almost worshipful enjoyment. The performing choir delivered with as much epic punch as you would expect from such an anthem. You rarely seen an audience so moved by classical music as they were at that moment. It was surreal. 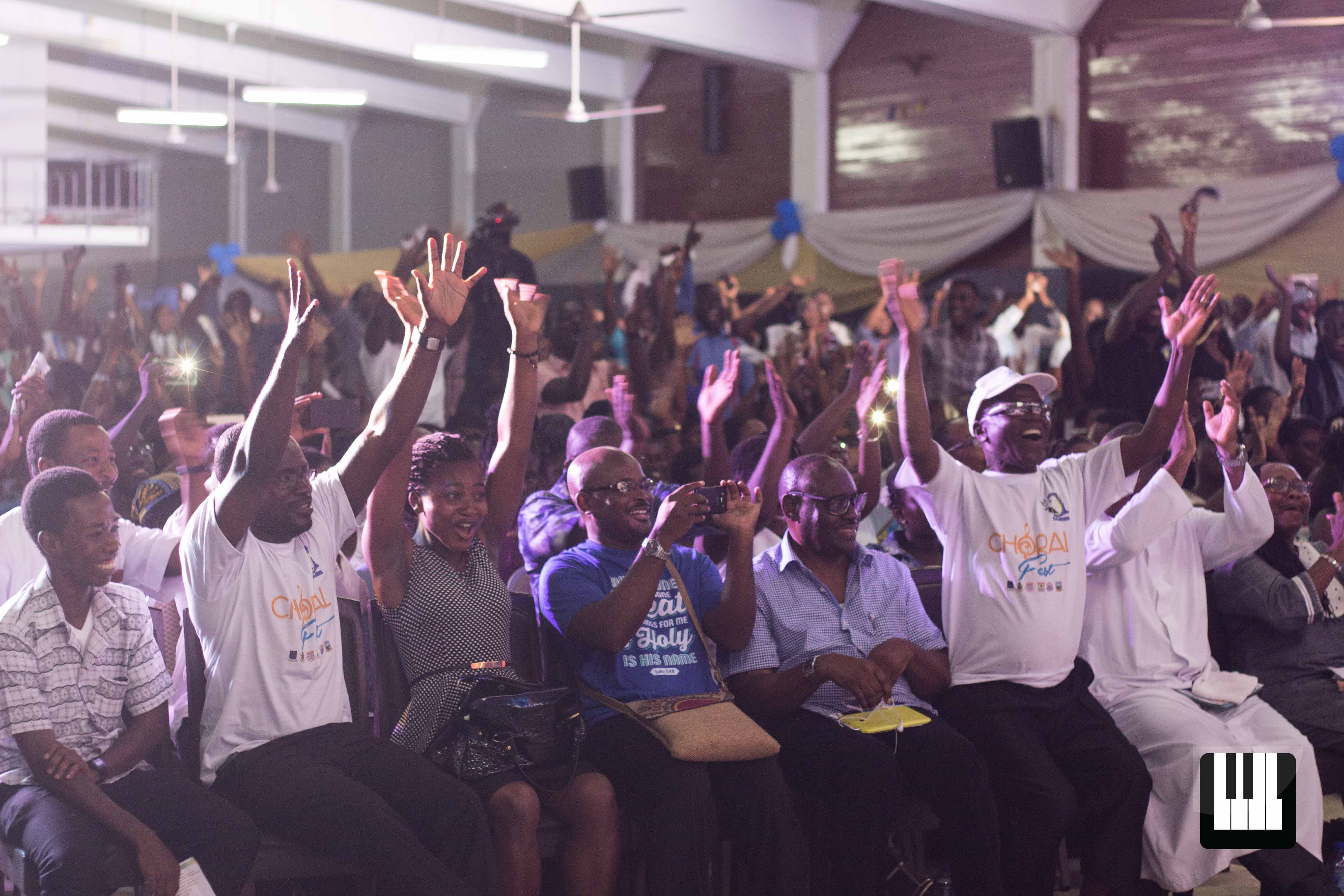 From there, the night continued at its exciting pace. Each choir left the stage with highlife performances that stretched their actual stage-time past the limit. And it wasn’t as though the audience cared: they enjoyed themselves before returning to their seats to watch the next choir. 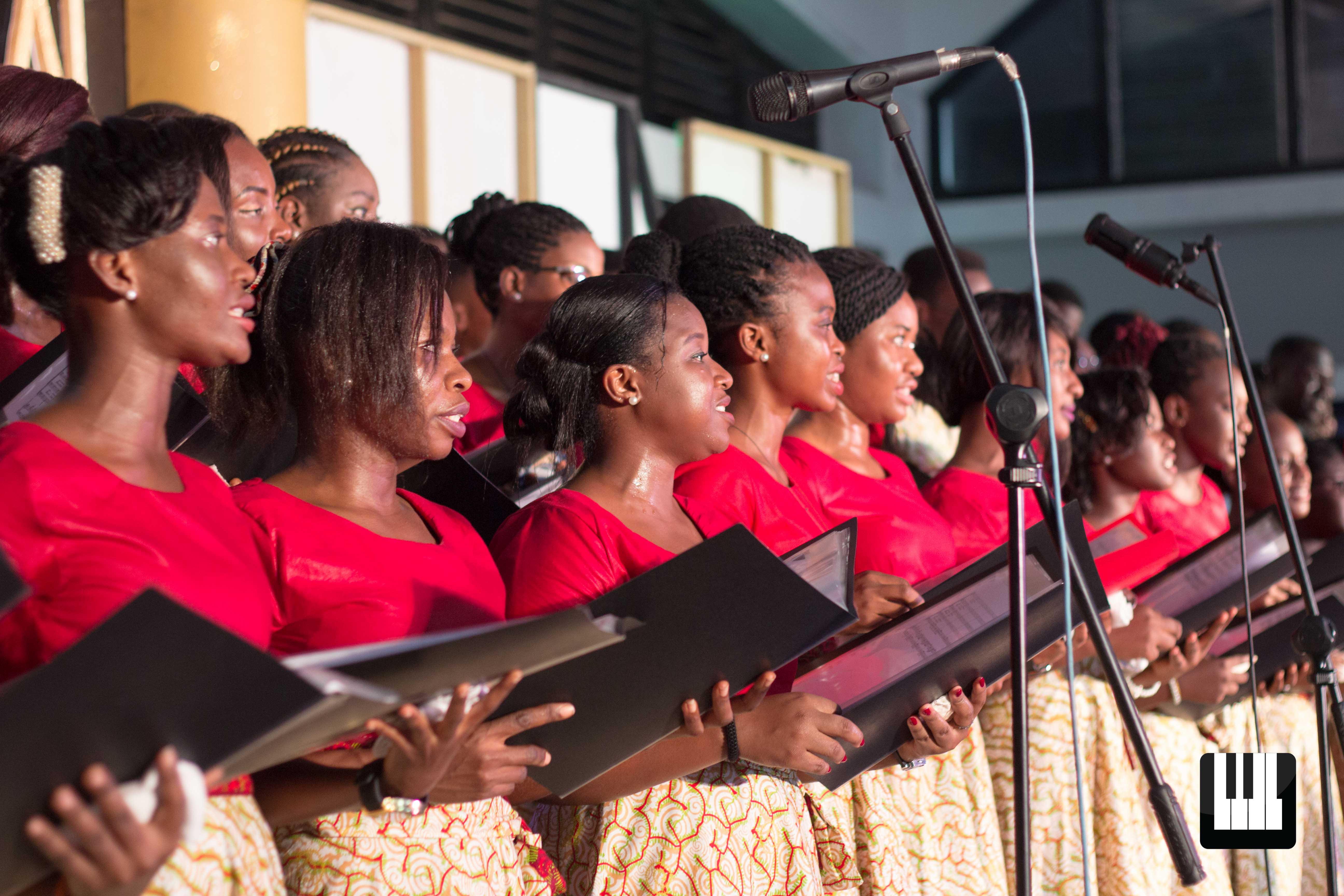 Choralfest 2017 was sandwiched by performances from the host choir, Pax Choir UG. Their lengthy curtain raiser was exceeded by their closing ministration. The last from their selection, Roland Carter’s arrangement of Lift Every Voice and Sing, conducted by Patrick Amankwaah, was a rollercoaster of dynamics that brought this remarkable event to a close. The extended arrangement of this hymn (and it’s sublime performance by the hosts) seemed to sum up this year’s National Choralfest: it was a lengthy event, with so much activity and enough diversity to keep the audience attentive and entertained. 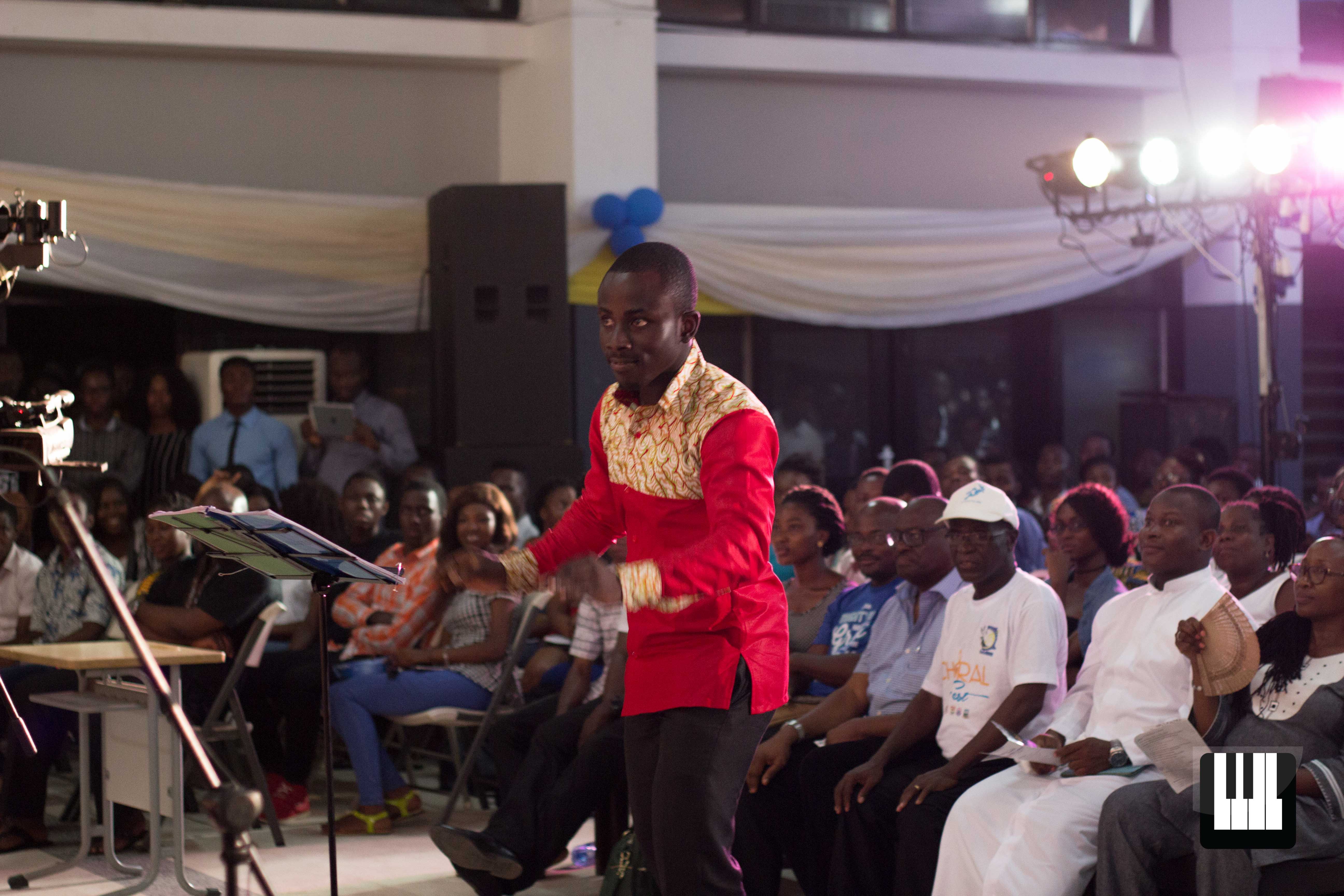 The audience participation was certainly a talking point during and after the event. Some present were disappointed that the amount of noise in the auditorium did not permit them to actually enjoy the music they came to listen to. The fact that the organisers had to call the audience to order, so the event could actually be brought to a close, should tell you something. It reminds me of why etiquette is usually developed as serious music becomes an important part of society.

On the other hand, the enthusiasm from the crowds reminded everyone present of the power that Ghanaian choral music has in bringing together the youth of this country. I’m looking forward to the next National Choralfest.