Pax Romana Choir, UCC, conducted by the brilliant composer and director Samuel Yawson, performed the complete Nelson Mass of JF Haydn at the New Auditorium of the Catholic chaplaincy on UCC Campus. The performance saw current members and alumni of the choir come together for an outstanding celebration of Catholic music.

At exactly 4:46m I was ushered into the New Auditorium of the Our Lady Seat of Wisdom Catholic Chaplaincy at the University of Cape Coast and handed a brochure for the Nelson Mass performance. It was a few minutes before the start of the evening’s event: the stage lights, decorations and sound were all set for the concert. A few minutes to the start of the program, I could count roughly 45 people seated. This number included some from invited choirs. 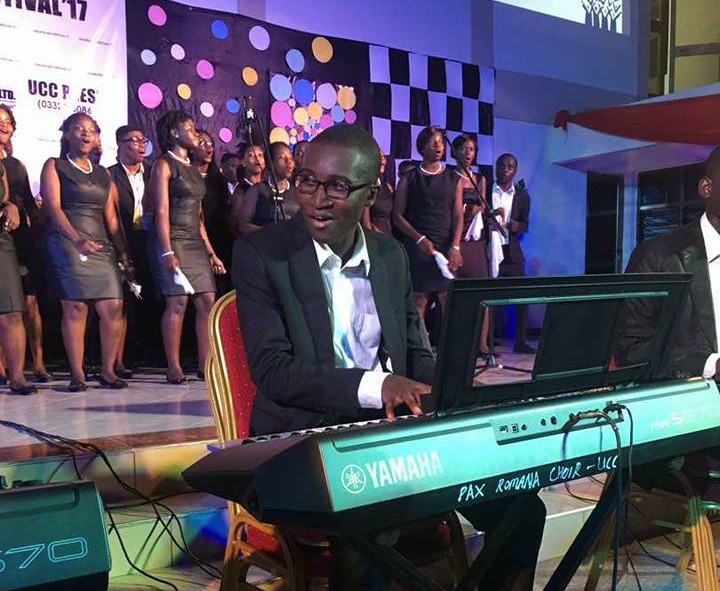 At three minutes after 5pm, the event was started with an opening prayer. The St. Peter’s Regional Seminary Choir, Pedu, and the Madonna Choir performed the Gloria from the mass of St. John the Baptist for the curtain raiser. After a lengthy introduction of dignitaries, the president of the host choir, Pax Romana Choir UCC, welcomed the audience. Reuben Amedorme’s address highlighted the choir’s 52 years of ministry, and the many remarkable things it has achieved in its half-century. The chairman of the event, Dr. Samuel Bert Boadi, an alumnus of the choir, was introduced to the audience.

After this, the Protestants and Pentecostal Chaplaincy Committee (PPCC) Choir performed a hymn and some highlifes. The audience were given a synopsis of the work they came to hear, followed by a refresher on concert etiquette.

The host choir came on stage, dressed in black and white. The ladies wore black straight dresses with white pearls, and the gentlemen were in black suits with black flying ties. They were about a hundred choristers at the performance. They were followed by the accompanists, Gregory Yankey, Stephen Addison, Gilbert Bonsu, Augustus Cobbinah and Kenneth Emmil Conduah, the trumpeter. Two alumni of the choir - Marie Atta Panyin Agbenyeku and Alice Konadu, dressed in red and turquoise long dresses were next on the stage. Along with them were Kwame Nyarko-Jectey, a tenor and Paul Skayman, a bass.

The conductor for the night, choirmaster Samuel Yawson was the last to come on stage.

Haydn’s Nelson Mass follows the format of the Latin Mass of the Catholic Church. It is divided into six movements: the Kyrie, the Gloria, the Credo, the Sanctus, Benedictus and Agnus Dei. The elaborate composition, written at the height of the composer’s reputation, earned the nickname when it was premiered around the time when news filtered into a beleaguered Vienna of the victory of the British Admiral Lord Nelson over Napoleon at the end of the Eighteenth Century.

After roughly forty-six minutes of performance, the audience couldn’t resist the urge to give the choir a standing ovation when the performance came to an end.

After the main event of the night, an appeal was made for funds for the choir’s second album. This was accompanied by several popular highlife tunes during the collection of the offertory. Pax Choir UCC, under the leadership of Samuel Yawson, proved its mettle with the complete performance of this demanding work. Current and former members of the choir have been influential in a number of choirs and other ensembles in the country.