The University of Ghana’s third edition of Easter Choral Festival, a programme which had its inception in 2015 to commemorate the Easter festivities and to fraternize members of the university community, was held on the 20th of April with performances by choral groups from within and outside the University of Ghana.

The programme which attracted lots of students, especially those fond of choral music, commenced almost half an hour after the scheduled time (6:30pm) at the R.S Amegashie auditorium, at the University of Ghana Business School, amidst sound checks by MIDO Productions, one of Ghana’s enterprising sound production teams.

The programme officially started with an opening prayer by Rev. Dr. Abamfo O. Atiemo, the chairman of the university chaplaincy board, who welcomed the audience on behalf of the absented Vice-Chancellor. In his welcome address, he reminded the gathering for the need for fellowshipping and sharing with humanity during the Easter period. 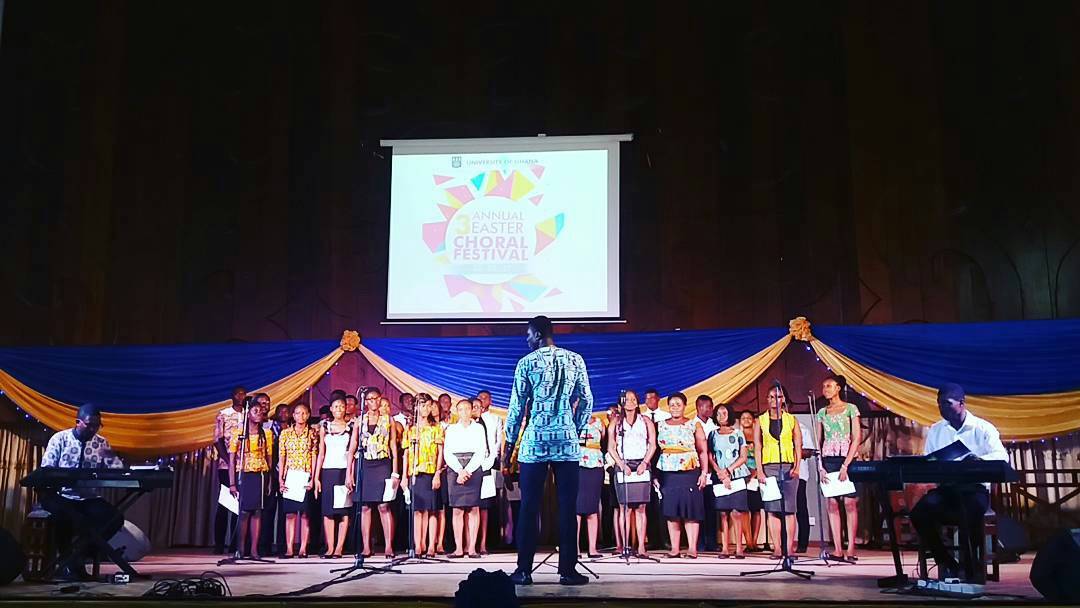 Performances for the day kicked off with the University of Ghana Jubilee Choir led by Kenneth Amoah Jnr. rendering songs by renowned composers, James Varrick Armaah Debonyeni, Stephen Adams' Holy City and G.F Handel's Worthy is the Lamb. The performances were applauded by their audience who enjoyed their fascinating rendition of Holy City. The Levites Choir of the National Union of Presbyterian Students – Ghana, led by Kofi Oku-Afari followed up with their performances of G.F Handel’s Surely He Hath Bourne Our Sins and Witsfield Kwablah’s Blow your Trumpet.

Pax Choir-UG followed up with their enthusiastic, endearing and colossal performance led by their dancing conductor, Benjamin Senyo Ackah in rendering the classic And Can It Be by Charles Wesley, James Varrick Armaah's Mensi Den, Reginald Spofforth’s Hail and Wasore by Yaw Sekyi Baidoo.

The El-Dunamis Minstrels followed this with a medley of hi-lifes during the offertory. They followed it up with outstanding performances of Horatio R. Palmer’s Master the Tempest and F. H. Cowen’s How Excellent is Thy Loving Kindness. They were under the baton of Anthony Dumenyo in the stead of Rev. Samson Okai, their Choir Director. Their energetic and classy performance attracted a resounding applause as they left the stage for the next participating choir to have their turn.

With the auditorium filled with so much ecstasy, the Aldersgate Voices of GHAMSU took over with performances of G.F Handel’s I Know That My Redeemer Liveth with a beautiful solo by Angelina Ghann and Since by Man Came Death, Newlove’s Jesus No Do, with a duet by Marian Serbeh and Ato Markin Jonathan and George Bennard’s Old Rugged Cross with a trio by Nana Kwamena Ato, Amissah-Nyarko and Roland Nana Amoah under the baton of Clement Yorke.

The choral festival was climaxed with the mass choir singing the famous Hallelujah Chorus by G. F Handel and the university’s anthem, after which the closing remarks and prayer was said by a representative of the SRC. The mass choir entirely brought the curtains down for the evening with renditions of medley of hi-lifes, including the Presidentially endorsed song of the year - Varrick Armaah's Oye.

The program was a success in spite of some technical challenges emerging during the programme. Hopefully, they will be resolved in subsequent programmes by the organizers. The audience must also be appreciated for making it to such a programme especially on a weekday when people can hardly make time off their busy schedules to turn up for events. The effort of the leadership of the university must be applauded for organizing such an event which goes a long way to promote choral music in the university community and the country.