Accragio in Concert at Cuppa Cappuccino

Cuppa Cappuccino, at Airport West, was the venue for a little night of choral music, hosted by Accragio, a “local community choir.” The unconventional grounds for the concert - the small garden between the hangout and Antique Lemonade - was packed with eager fans of the choir, mainly from the expat community, several minutes before 7pm, when the event, “Accragio in Concert," was to begin.

Unfortunately, we had to wait nearly forty-minutes before the show would start: hours before our arrival, the organisers were confronted by some enforcers of the city-wide ban on drumming and noise-making, who disrupted the initial sound setup. Besides causing the event to start late, the intended curtain-raiser performance, a movement from one of Corelli’s Twelve Trio Sonatas, was omitted from the program. It would have seen a pianist, a cellist, a flute and violin on stage. 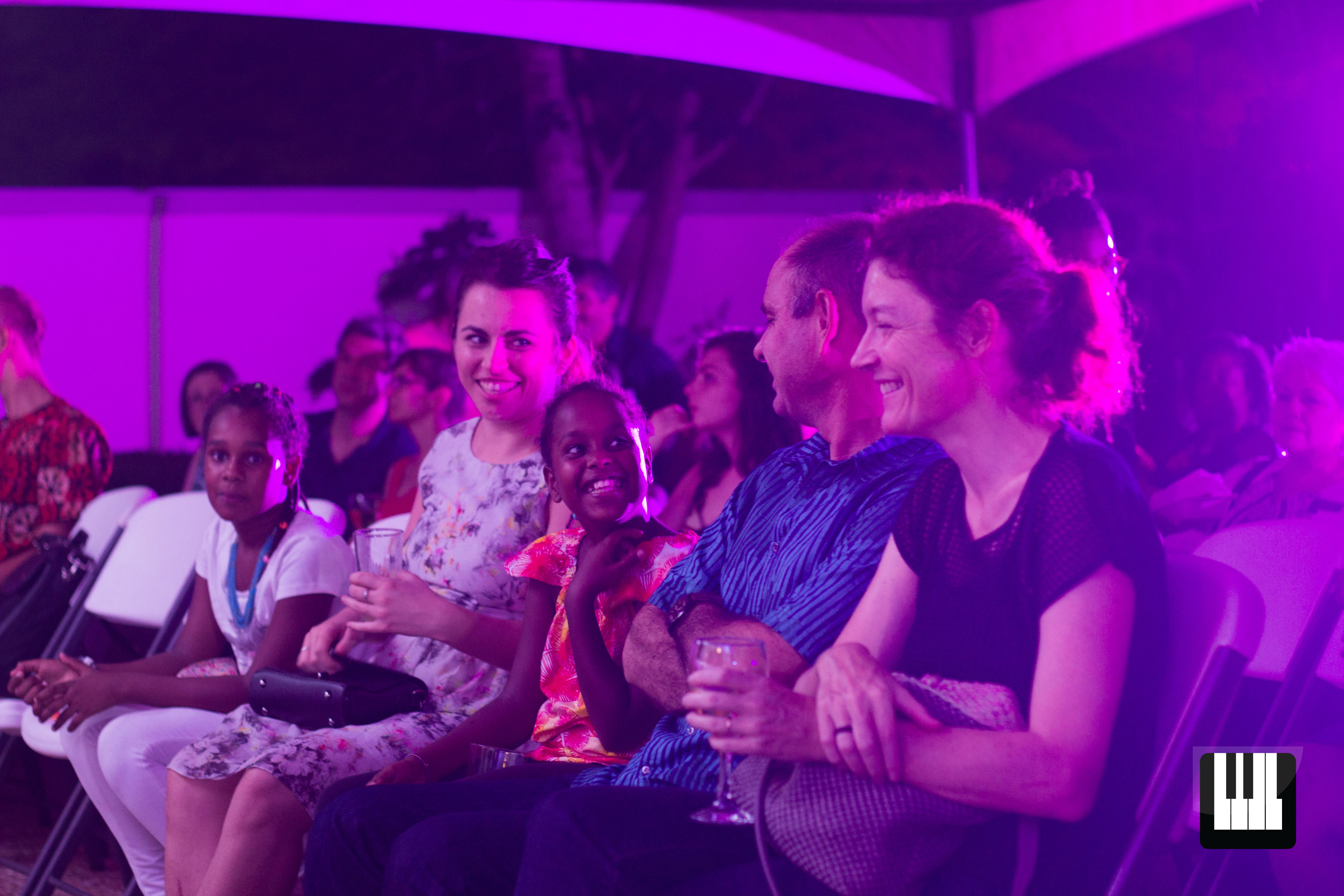 Accragio was founded in 2003 by members of the British High Commission. The choir is predominantly made up of expats living in Accra who love to sing and make music. Witsfield Kwablah is the current conductor of the choir. Two other musicians performed with the singers: Mary Richards, on an electronic piano and flute, and Michael Dodoo, on the piano and an electronic keyboard. 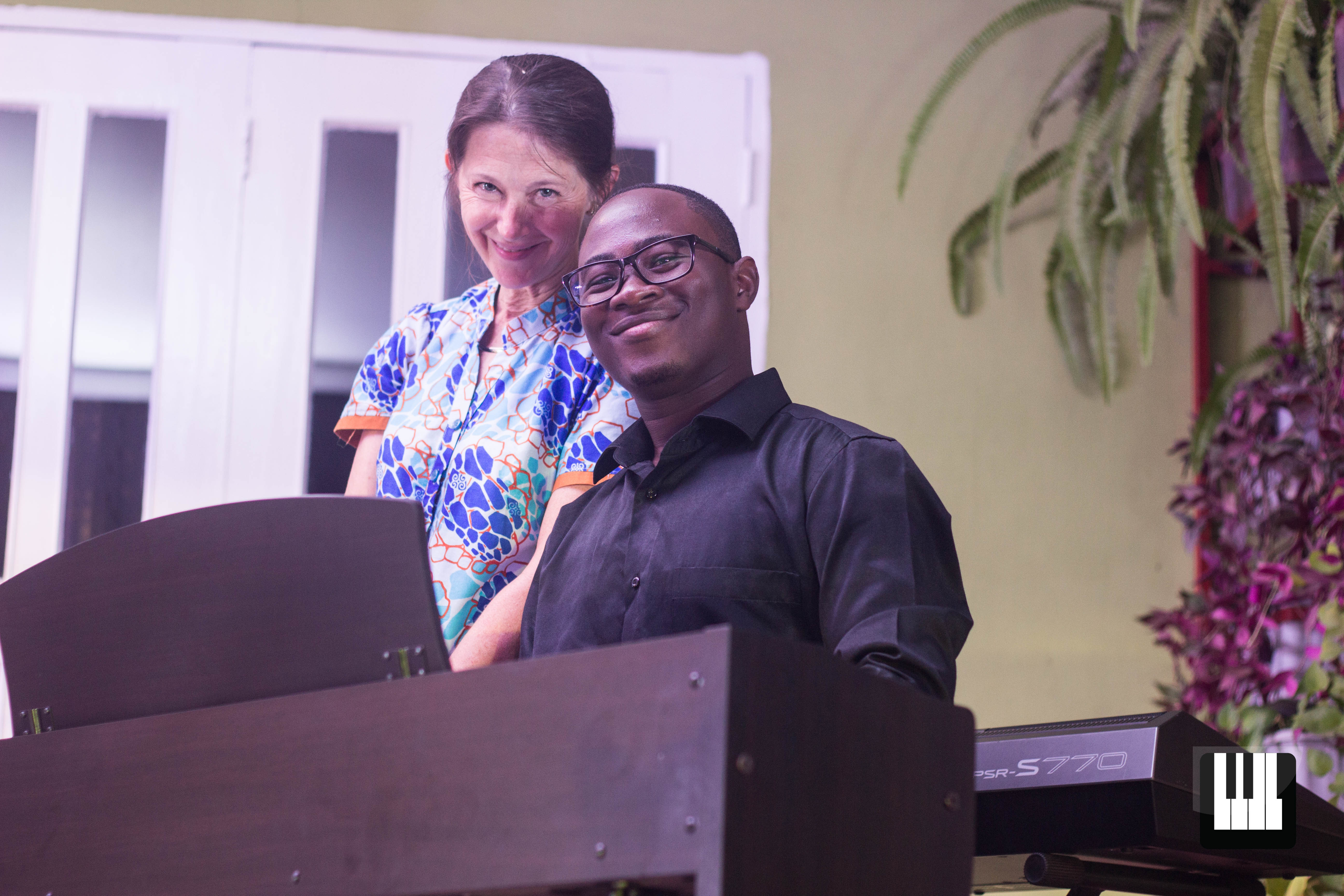 At about 7:30 pm, when the final touches were being made to the sound and mic setups, Michael Dodoo took to the stage to play a medley of jazz-style popular and contemporary tunes, beginning with “You Raised Me Up” and ending on a high with Osibisa’s “Welcome Home”.

Kingsford Brown-Dadzie, a bass singer acted as the MC for the night. He introduced the choir to the audience, briefly running through some of its history and past performances, before taking us through the program. The four-part concert saw sacred and secular music from three continents, spanning four centuries. 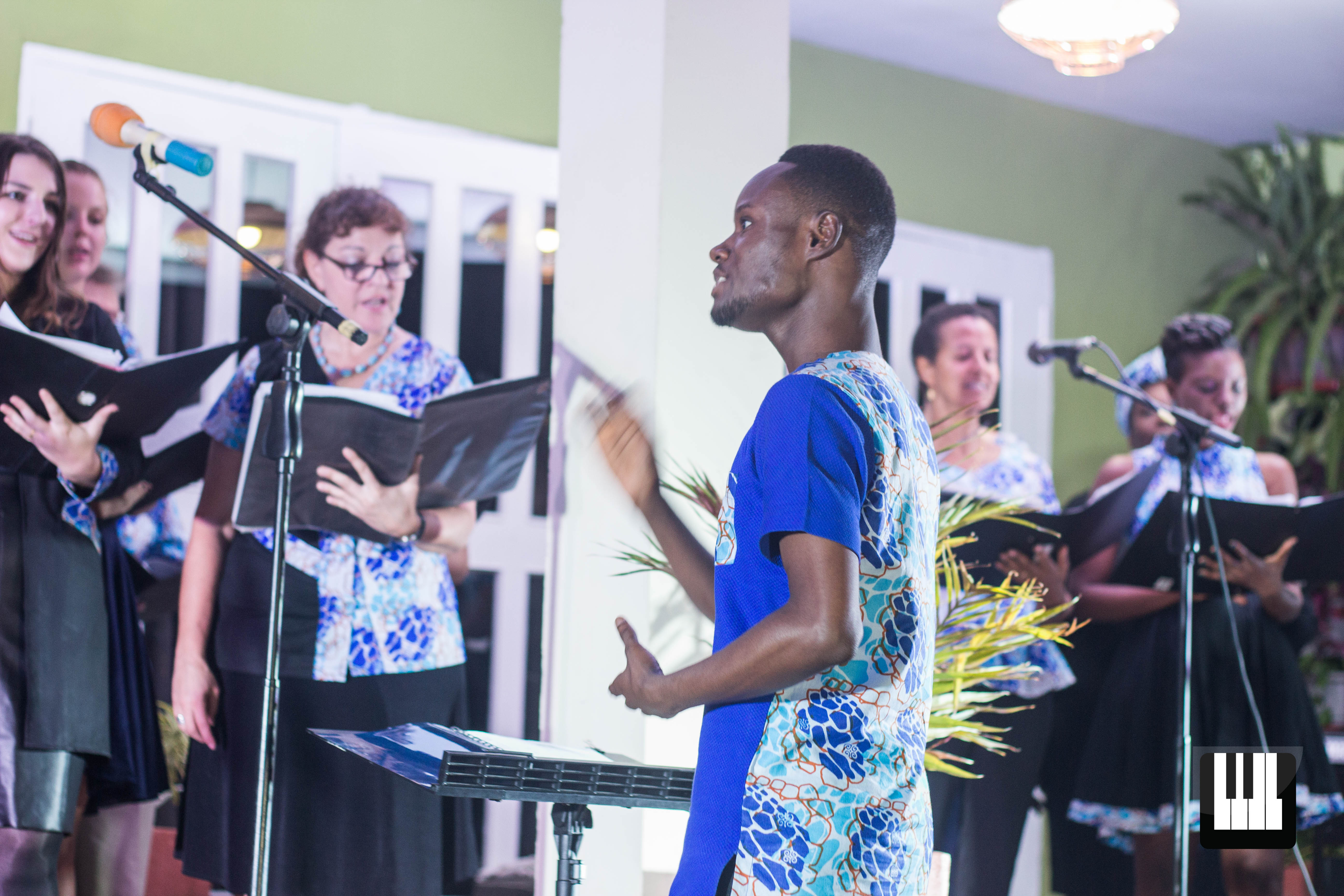 The first piece of the night was Audrey Snyder’s choral arrangement of "Circle of Life", from Walt Disney’s "The Lion King". This was followed by a performance of Gabriel Fauré’s stirring "Cantique de Jean Racine", with piano accompaniment. Bach’s "Jesu Joy of Man’s Desiring" was performed next, in the original German, with piano and flute accompaniment from Michael Dodoo and Mary Richards.

From the start of the concert, Accragio’s unconventional (as far as Ghanaian choral concerts go) repertoire made its mark on us. The second part of the event featured the Accragio Chamber Choir - a smaller ensemble drawn from the main choir. The highlights of this section included Thomas Tomkins’ "When David Heard", a Baroque-era English motet that leans rather heavily on the Renaissance style, a setting of Robert Frost’s poem “The Road Not Taken,” and a choral arrangement of Leonard Cohen’s “Hallelujah”. 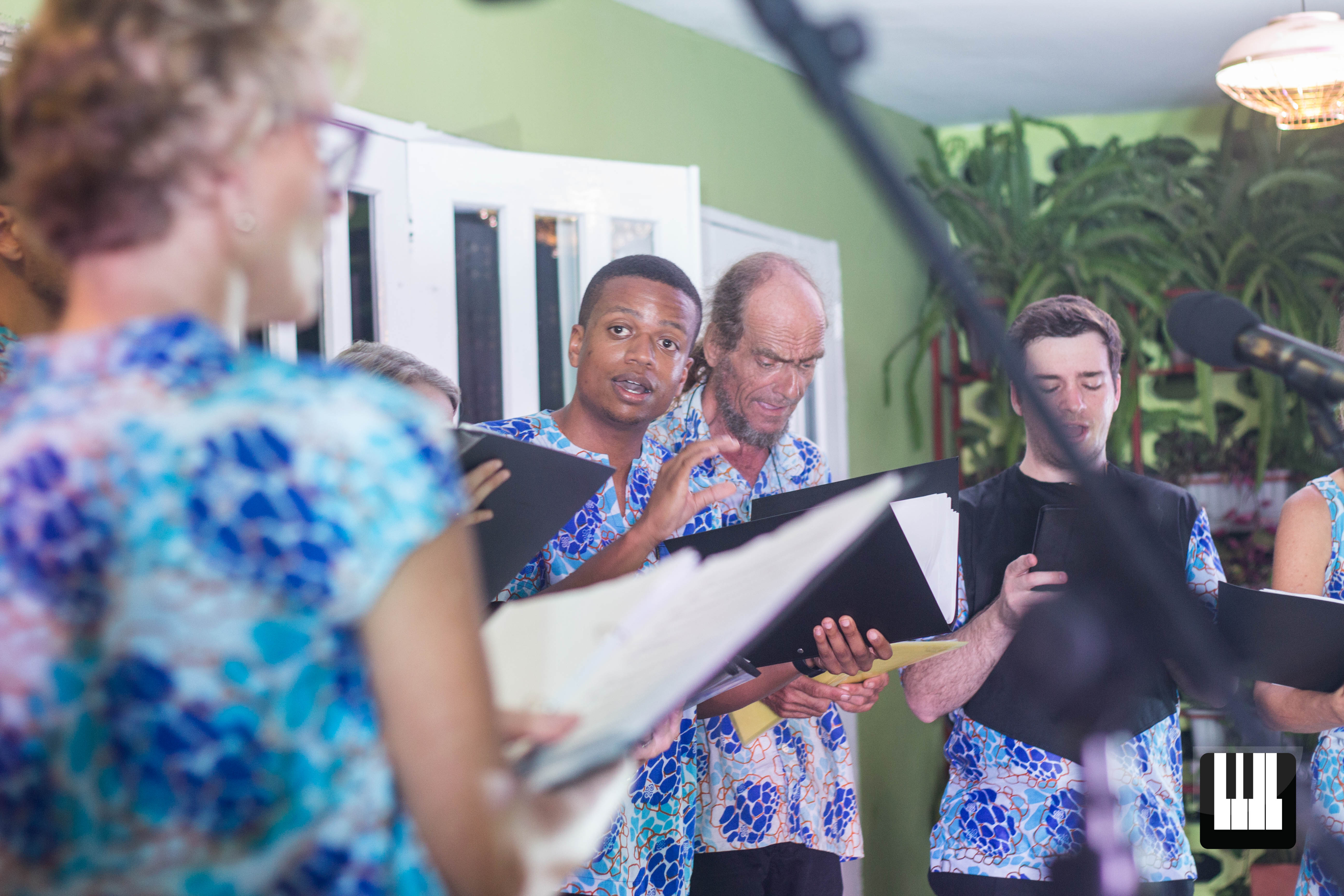 The final part of the concert contained the most African pieces. Michael Dodoo accompanied the choir on the piano as they sang "Nkosi Sikelel’ iAfrica". Thürig’s rich choral arrangement of the hymn begins with a solo soprano, which is later joined by an alto voice, before the male and female parts of the choir do a call and response at the first refrain. Melinda Tabler and Erin Brown-Dadzie were the soloists in that moving performance. Eric Taylor led the choir in Hall Johnson’s Gospel-style arrangement of the negro spiritual “Ain't Got Time to Die”, after which Enoch Agyepong played the lead role in their performance on Miriam Makeba’s "Pata Pata". 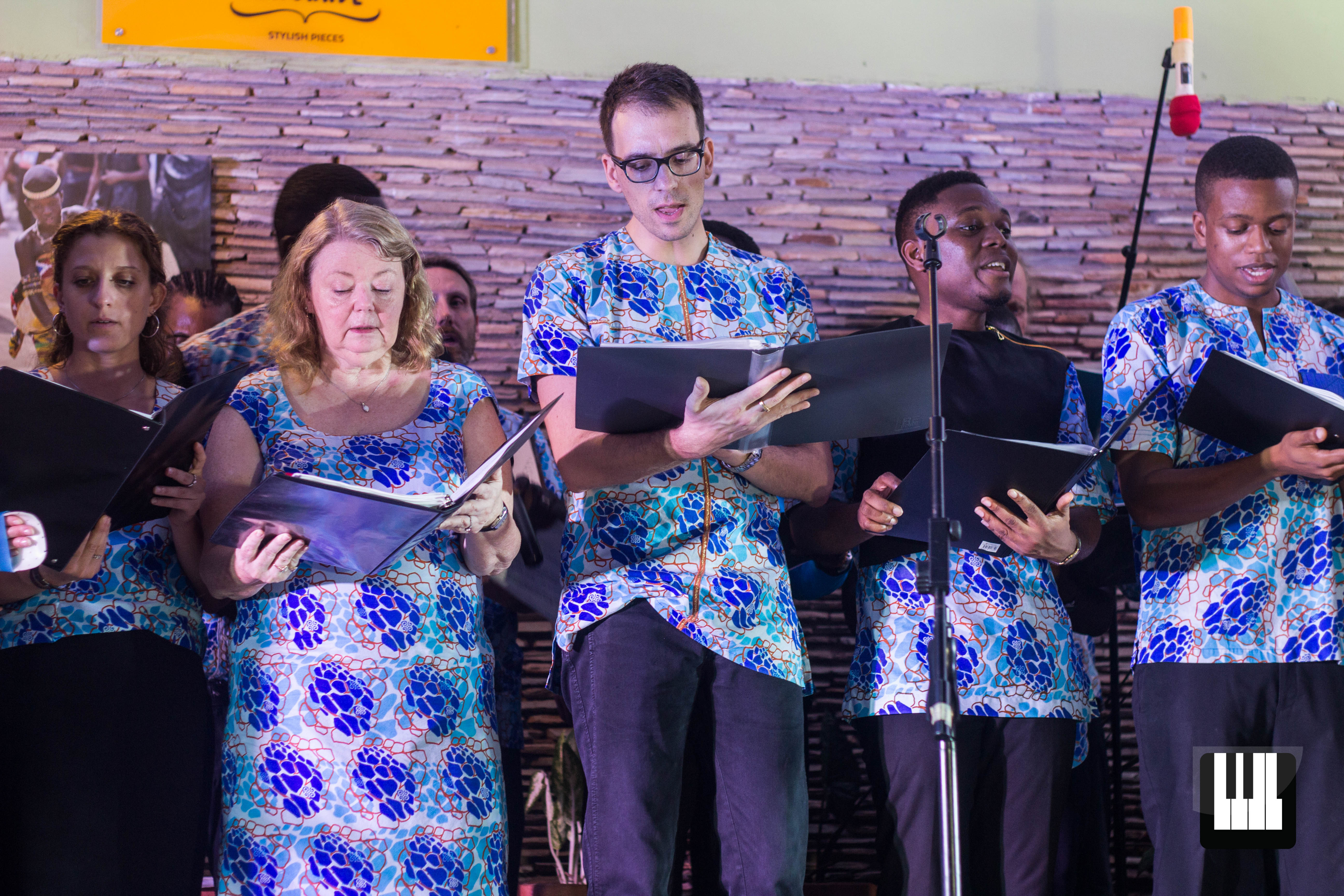 The last pieces of the night were two popular highlifes from James Varrick Armaah, "Oye" and "Asalamaleikum". These were accompanied by Michael Dodoo on the electronic keyboard.

Our first Accragio experience left us with quite a lot to take back. For a fifteen year-old choir, it comes as a bit of a surprise that Accragio is not as widely known as some of the younger groups we're more familiar with. The niche it serves is certainly a factor contributing to its relative obscurity. The biggest hallmark of the choir is its cultural diversity. The group is perhaps one of those few active in Ghana to have the most countries outside of Africa represented among its membership.

Not tied down to the contemporary Ghanaian choral aesthetic, Accragio’s repertoire for the night, and its own self report, seems to suggest that it easily draws from the breadth of musical traditions around the world, and across time.

And that is a good thing for us: any keen follower of Accragio should expect to hear music they’re not likely to readily encounter on other stages in the country.