﻿Editor’s Note: This review is part of a series of “Look Backs” that will be published in the following weeks. Over the last several months, our team has worked on a number of concert reviews that have never been published.
Look Backs allow us to revisit these events and consider them with greater insight, while allowing our readers to relive those moments long after they have experienced them.
In the run-up to the second edition of Accra Goes to the Opera, we look back at the Accra Symphony Orchestra’s exclusive sixth anniversary concert, which Rev. Albert Ocran described as an abridged version of what to expect at their flagship event.

Lumina and the Accra Symphony Orchestra celebrated their sixth anniversary at an exclusive event at the La Palm Royal Beach Hotel on 29th April, 2018. The invite-only concert was witnessed by, among others, the ensemble’s chief patron, Dr. Mensah Otabil and Miss Joyce Aryee, chairman of Harmonious Chorale. A small delegation of students from Achimota Senior High School were also present. They were led by Mr. Chrys Placca, one of the conductors of last year's "Pirates of Penzance".

Thirty minutes after most of the audience had arrived and were seated, Isaac Sakyi-Amaning, a violinist and guest of the ASO, along with Amos George Tetteh and other musicians on electronic instruments and the drum kit took to the stage for the curtain raiser. Isaac opened with a solo performance of "The Prayer", and "My Heart Will Go On", accompanied jazz-style by Amos with subtle percussion from the rest of the band. After Isaac’s solos, the band continued with more contemporary electronic music, by the end of which the full strength of the Accra Symphony Orchestra had mounted the stage.

We later learned that these impressive performances were unplanned. 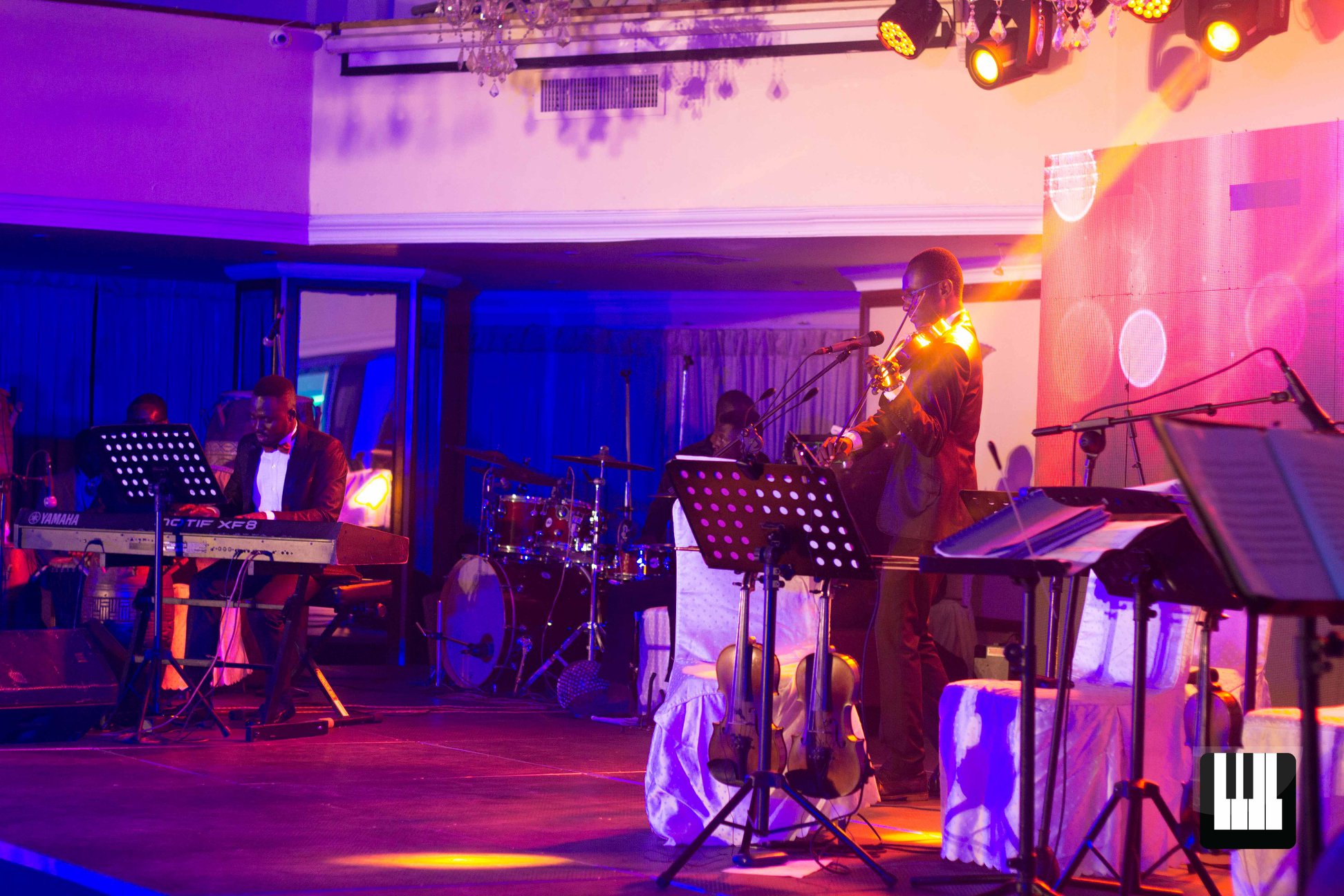 Albert Ocran, the MC for the night, mounted the stage just before seven to welcome the audience and lead an opening prayer. As part of his opening address, he spoke at length about the late co-founder and first director of the orchestra Nana Danso Abiam. Nana, a celebrated art musician and founder of the Pan African Orchestra was the focus of the first act of the anniversary concert. His music is globally acclaimed, and is currently distributed throughout the world by Virgin Records.

Although three of his orchestral works were listed on the provided program, the first two, "Sompa" and "Yaa Yaa Kole" were performed. Both pieces are highly percussive orchestral works, easily recognizable as “African” because of the heavy reliance on the continent’s idiom, but, to us at least, not much more identifiably Ghanaian.

“Sompa” is a very accessible lyrical work that parades a number of memorable melodic and rhythmic ideas, some of which may be familiar to many Ghanaians. An almost singable theme dominates the work, occurring enough times to form a strong impression with the listener. We first heard “Sompa” performed late last year when the orchestra signed an MOU with the Accra Metropolitan Assembly that effectively made them the city’s official orchestra. This performance was noticeably better than the first.

“Sompa” gave way to the more fanfare-like “Yaa Yaa Kole”, the latter’s highlight being the abrupt silence that greets the ear after several minutes dominated by one loud repetitive theme.

Both "Sompa" and "Yaa Yaa Kole", very different compositions, seem to suggest what we anticipate to be the breath of the composer’s ideas for capturing the essence of the continent’s culture in music. With the massive effort put into this orchestra, there is an opportunity to increase public awareness about the potential of African orchestral music that begs to be exploited. The Accra Symphony Orchestra is perhaps in the best position to bring to the fore these works of Nana Danso Abiam, and others with similar visions.

The orchestra immediately followed the second Danso work with the opening of Verdi’s "Va Pensiero", the popular chorus from his Nabucco, at which point members of Lumina finally took the stage to begin their performances.

After the Verdi chorus, Daniel Akrong began the first solo performance: Mozart’s “Madamina, Il Catalogo e Questo”, from Don Giovanni. In the humorous bass aria, Daniel played the role of Loporello, servant to the titular character who describes the qualities of the various women his master has seduced all across Europe. 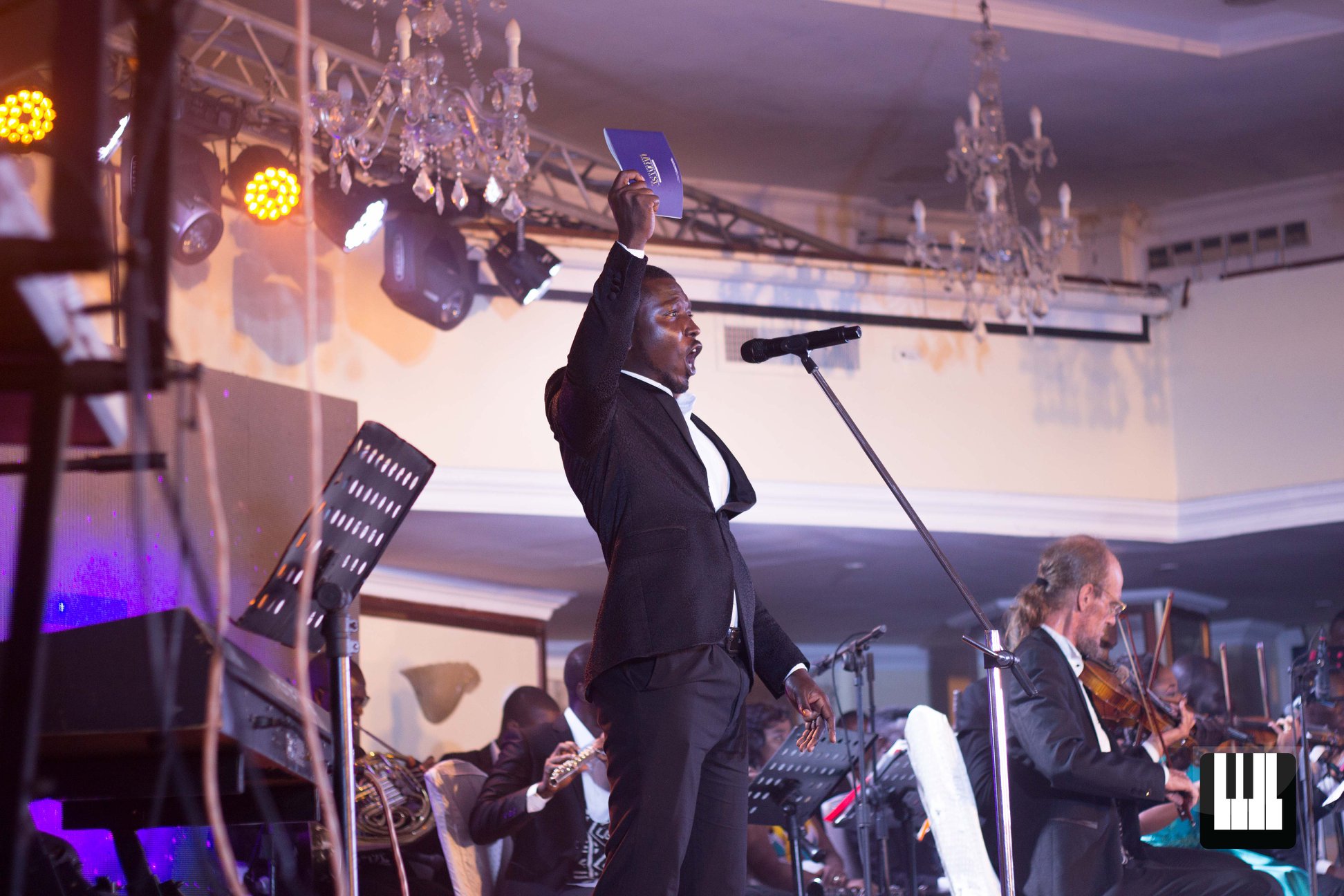 The first duet of the night was performed by Uche Nwabueze and Phyllis. This was Rossini’s “O! Che Muso, Che Figura”, a comic duet from his opera "L'italiana in Algeri", set in Algeria. Appearing in the first act of the work, the light-hearted duet is the first time two major characters of the story, Bey Mustafa (played by Uche) and Isabella, the “Italian girl”, meet at the former’s palace.

Guy Bertrand performed Puccini’s famous tenor solo "Nessun Dorma", backed by the other singers off-stage. Throughout these performances, the translated lyrics of each song were projected behind the singers, giving those in the audience not familiar with the language a chance to better follow the music they were hearing.

The next performance saw Kojo Sam, Naa Ashami, Uche and Esther Adams sing “Bella figlia dell’amore”, the popular quartet from Verdi’s Rigoletto. Kojo plays the role of the lustful Duke of Mantua, and opens the quartet by singing out his love for Maddalena (Naa Ashami) with the words “beautiful daughter of love”. On the other side of the double scene in which this quartet is sang stand Uche and Esther, the former playing the role of the duke’s hunchbacked jester Rigoletto, the protagonist of the opera, who brings his daughter Gilda, to witness the duke’s licentiousness.

Without any background, the full impact of this scene was lost on the audience. The scene takes place at a seedy inn: the duke, inside the building, flirts with Maddalena, the innkeeper’s daughter. Outside, Rigoletto intends to show his daughter what sort of man she is in love with. The Duke of Mantua had earlier proposed love to his jester’s daughter. In this scene, Gilda watches with her father as his master betrays her love. Distraught, Rigoletto assures his daughter that he plans to avenge her. 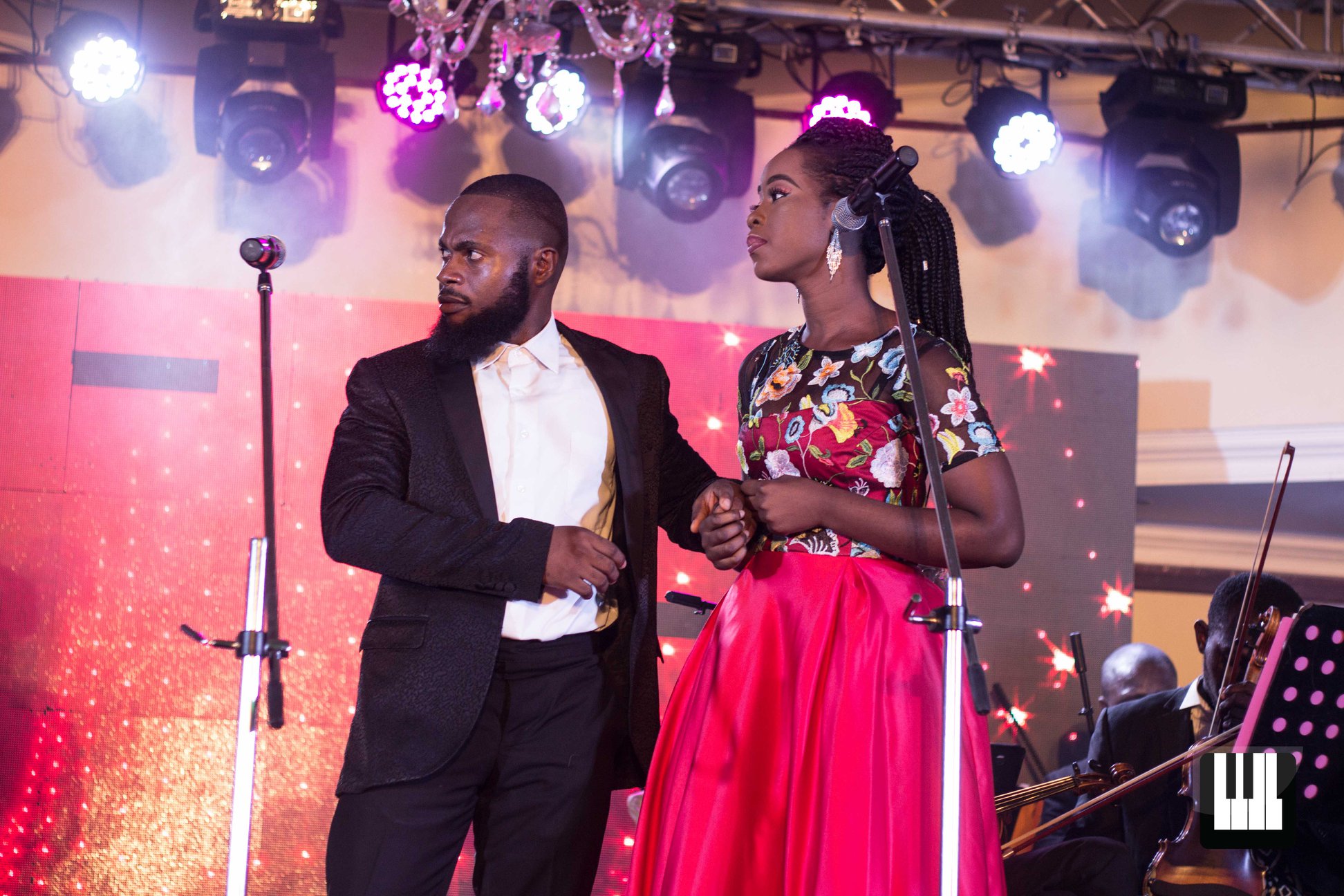 Inside the inn (and throughout the entire quartet), the clueless duke sings with rapture while Maddalena pretends to fall in love with him. The villain of the scene does not realise that he has been seduced into the inn, and the innkeeper is an assassin hired by Rigoletto to murder him for his lies and betrayal.

Despite the missing context, the drama acted on the small stage left us with strong impression, one that should have been obvious from the start: the singing talent from Lumina perhaps has enough dramatic potential needed for acting opera.

After the epic scene from Rigoletto, the next performance slowed things down a bit: Jennifer sang Pietro Mascagni’s Ave Maria. “Languir Per Una Bella”, the next performance, saw a bare-footed Isaac Amaniampong, dressed in a white gown crawl on stage with his hands bound with a thick rope. In this aria also taken from the first act of L'italiana in Algeri, he plays the role of Lindorno, an Italian slave who longs for his true love as his Turkish master plans to marry him off to another.

Next came Mozart’s “Ah Guarda Sorella”, from his Cosi Fan Tutte, performed by Jennifer and Naa. Taken from the first scene of the first act of the opera, the two sopranos praise their respective fiances, two soldiers who, unbeknownst to the ladies, have just made a wager with a mutual friend who bets that their wives-to-be, - like all women - are fickle and unfaithful.

The audience were stunned by the final notes of the next duet, “Addio, Addio”, from Verdi’s Rigoletto, in which Kojo Sam and Esther Naa Adams continued the roles they took up in the earlier quartet picked from the same work. The final performance for the first part was a bit of a grand affair, with all singers on stage for the famous “Drinking Song” from Verdi’s La Traviata. The audience was also allowed into the performance, clapping along with the singers when they were cued to participate.

Between this part and the next, Albert Ocran, the MC, indulged the audience with a little historical context to the orchestra and voices. He made special mention of the orchestra’s current director, Benedictus Acolatse, whose 2015 appointment transformed this ensemble into what it is now best known as: a highly talented group dedicated to the performance of acclaimed challenging music from the world of Italian opera (a novelty in this country), while keeping a foot in the world of African and orchestral pop music. 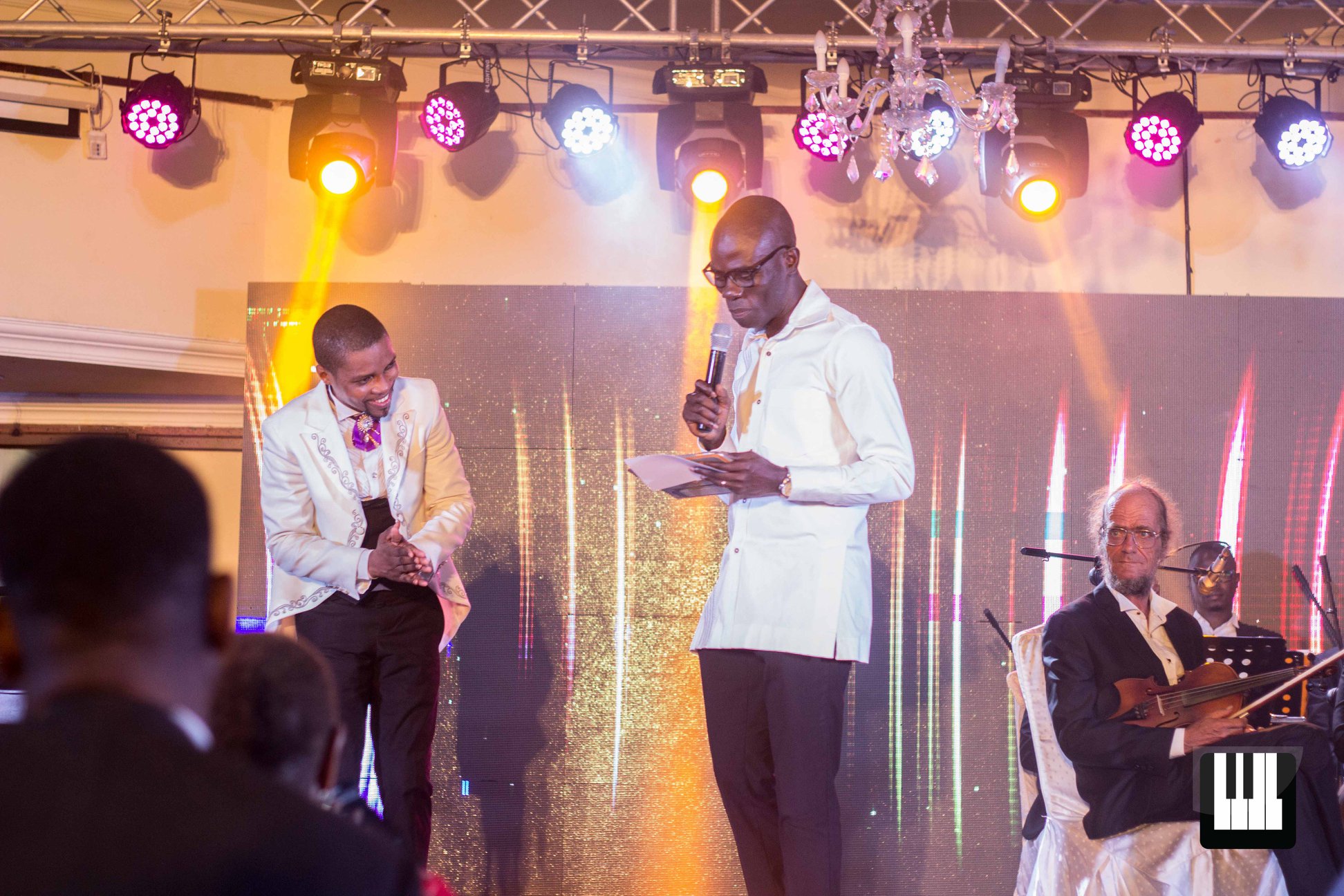 While boasting of the group’s numerical strength (40 full-time professional musicians), he spoke to the primary objective of this event by reaching out to potential patrons from among the audience, encouraging them to support this worthwhile project.

As perhaps the most well-organised and sophisticated ensemble active in Accra, we’ve often wondered if a place on their roll is among the most coveted jobs local classical musicians could aspire to.

The second part of the anniversary concert featured pop music. The audience responded with much more visible enthusiasm, especially to the first Ghanaian classic: an arrangement of Osibisa’s “Welcome Home” for all nine singers.

The male voices next performed Leonard Bernstein’s “Tonight”, from the musical West Side Story, followed by Schubert’s Ave Maria by the other half of Lumina. The men returned to sing “You Raised Me Up”, originally by Secret Garden. This was the first performance not accompanied by the orchestra, and it served as the finale of the concert. The audience received it with a standing ovation.

But, that was not all. 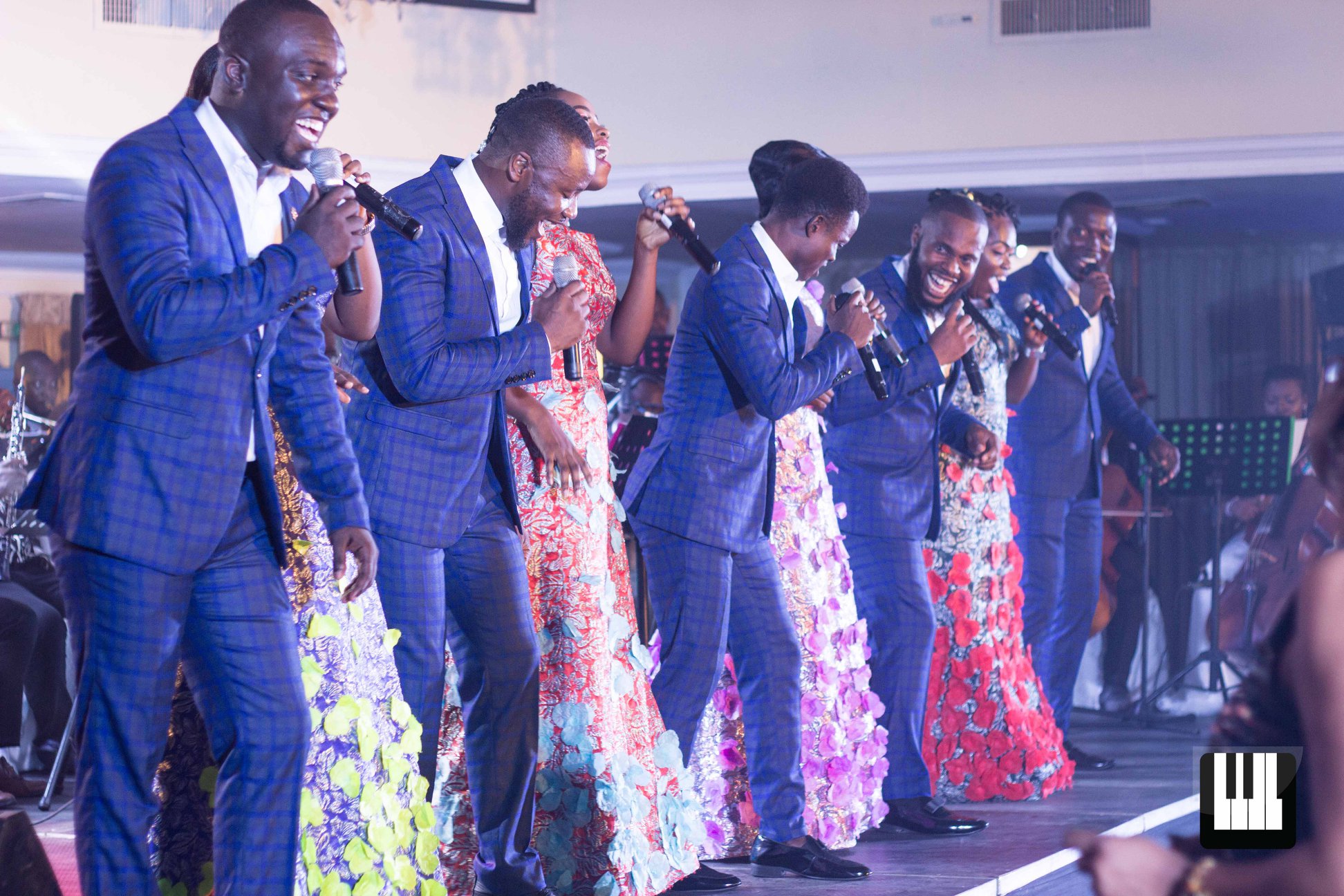 Between Italian operatic numbers and pop music, it’s hard to tell which Lumina and the Accra Symphony Orchestra do better. Quite a bit can be said about the former in the Ghanaian context. While a number of players in Ghana’s classical music scene have proved the existence of an audience fascinated by the novelty of obscure secular works from long dead Italians, we are yet to see the level of appreciation that may justify the staging of a complete work from the body of Western opera, despite the evidence that talent and finances will not hinder such an effort.

Even if this weren’t a dream the ASO aspired towards, they have created quite a compelling brand with the sort of mash-up performances they put up. Spearheading this niche opens up the musical experience of our listening public and broadens the range of styles performers could adopt.

The level of sophistication and “polish” that goes into even the smallest stages the singers of Lumina grace may be the bigger reason for their appeal, in our estimation. And while it means that few groups will be able to match them and attract their kind of audience, it seems obvious that this group is moving in a direction that makes them more removed from what we’ll consider as the popular wing of Ghanaian art music performance. This is worth some critical consideration.

As we head into October and the second edition of their flagship “Accra goes to the Opera”, we’re excited about the opportunity the ASO and Lumina have to further entrench their brand into the lives and ears of their fans, and we also consider the identity it continues to carve for itself.