Our Talents, Our Thanksgiving

Our first impressions of Harmonious Chorale’s “Our Talents, Our Thanksgiving” concert left us with a suspicion that it was born out of some genuine introspection from the musical powerhouse.

We’ve observed, over some years, a number of initiatives both individual and collaborative, spring up either directly or otherwise from the work this choir has put into promoting its genre of music. The choir, outside of its ministerial work, has doubled as a platform for the further development of classical music performance in the country. And individual choristers have, outside the ranks, significantly impacted the musical arts with their raw talent or enterprising projects.

With “Our Talents, Our Thanksgiving”, (OTOT) we seem to have come full-circle, with Harmonious Chorale offering a concert that celebrates those talents discovered and incubated under its wings. Whereas some previous concerts may have teased some of the ideas behind this latest event, the occasion was firmly rooted in the belief in and celebration of what the members of this group had to offer.

A glance at the program line-up confirmed our suspicion: the first and third parts of OTOT were dedicated to showcasing those talents that do not make it to the fore in the traditional choral setting, the mainstay of the choir. It also confirmed another thing: we were in for a long night. As with many things Harmonious, OTOT looked on paper to be a rather elaborate celebration of music, and then some.

The curtain-raiser performances, comprising of four anthems and a short highlife medley presented by the Legon Baptist Church Choir, could have stood on its own as a concert on a smaller stage. After a congregational hymn led - Methodist-style - by the group’s executive director Rev Joyce Aryee, Benjamin Offei Addo, himself a chorister, introduced the first part the concert. 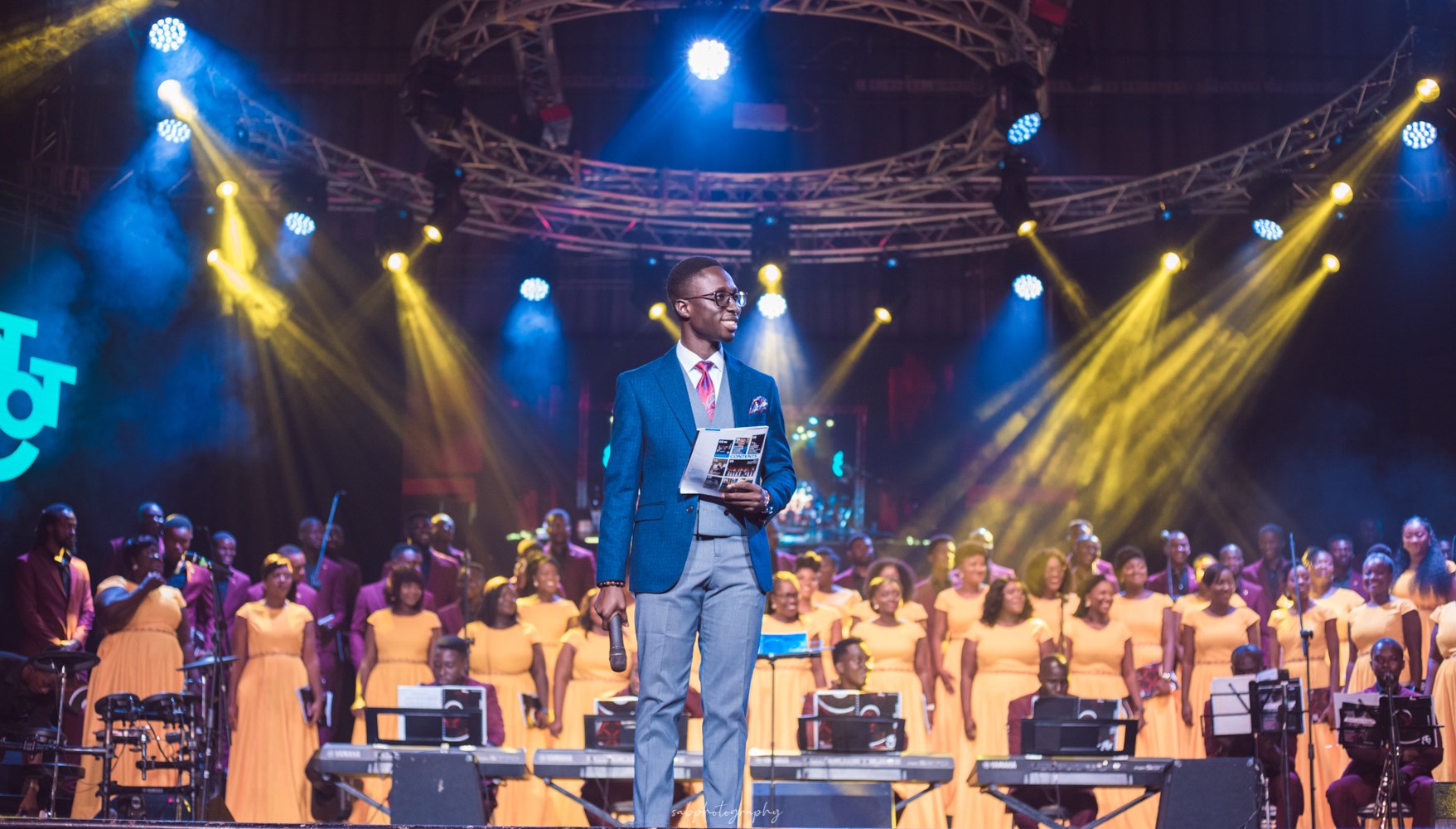 The first talent to be highlighted was Joel Aidoo’s skill as an arranger, exhibited in his arrangement of John McCormack’s “Bless this House”, performed a cappella by a quintet comprising of four male voices including the arranger’s, and Lordina Osei.

Quickly, and without much ceremony, trumpeter Timothy Nyante took to the stage, backed by the four keyboards, a trombone played by Michael Asiamah and the french horn. The beauty of Timothy’s performance of the first movement of the Haydn trumpet concerto (in E♭ Major) was somewhat hampered by the loudness of his mic’d instrument. As such some of the most dramatic phrases of his piece were quite painful to listen to.

The next performance introduced a distinctly black-American gospel style to the concert: a selection of nine choristers sang Your Grace and Mercy, to the beats of a modern drum kit, a bass guitar and the sound of a rock organ.

The audience was particularly amused by the performances of the so-called “Harmonious Babies”, short performances by children of some of the choristers. Some of these included von Herbeck’s “Pueri Concinite”, 6 year old Gerald Doh's brave attempt at Beethoven's Fur Elise on one of the keyboards, among other short songs. 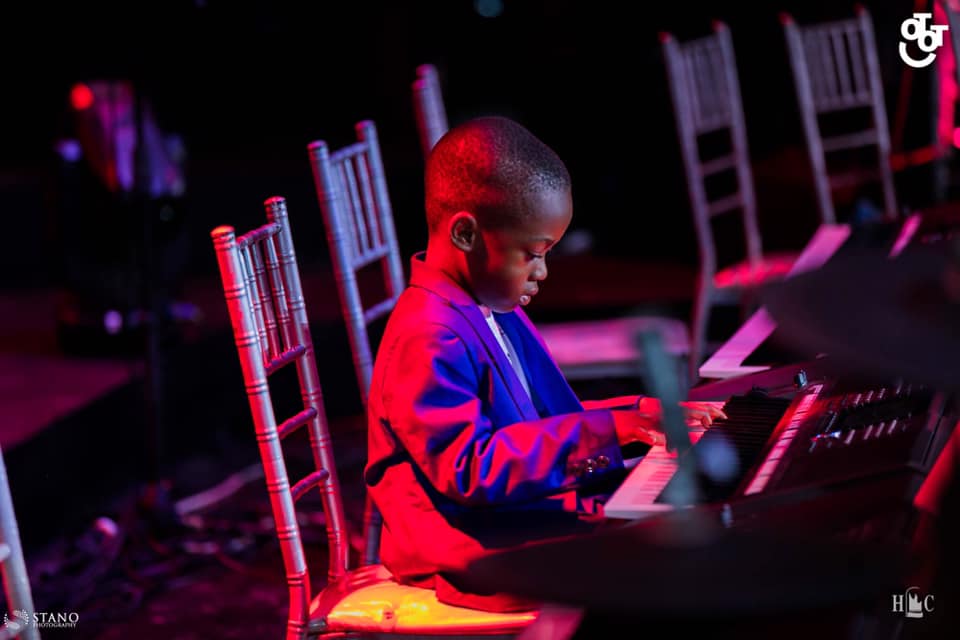 Patrick Agbodza-Gbekle performed the third movement of the Haydn trumpet concerto, with the same accompaniment enjoyed by the first trumpet soloist. This second trumpet work benefited from more comfortable volume from the speakers.

“Our Talents Our Thanksgiving” suffered from two major technical challenges, which saw proceedings paused for several minutes. The second power outage occurred during Patrick’s concerto performance. The silver lining to this mishap was this: we the audience enjoyed a repeat performance of the brilliant trumpeter’s work.

Among the things we noted during the retake was the significant difference between the timbres of the brass and electronic instruments. The sharp difference was most noticeable during the opening section of the movement. It was worth noting that this did not impact the soloist, whose parts were intended to stand out from his accompaniment.

Patrick’s trumpet concerto performance was followed by two love duets, one Italian and the other German, performed by Kennedy Dankwa and Lordina Osei, and Joseph Quaynor and Leslie Guede respectively. These also elicited very strong (and positive!) reactions from the audience. Naa Ashami Boakye’s arrangement of Leonard Cohen’s “Hallelujah” was performed by “The Three Sopranos”, which included Baaba Buckson, Franklyn Gyimah and Kabukwor Osabutey.

After a solid two hours of music, the first part of “Our Talents Our Thanksgiving” was rounded off with performances from an all female ensemble, and an all male choir singing Lloyd Webber’s “Love Changes Everything”. What we thought was most interesting about the all female ensemble was the choir’s use of six female accompanists, including three choristers: Nnenna Umeh, Kate Lamptey and Catherine Beryl Lutterodt on the glockenspiel, and Sita Korley as guest pianist. 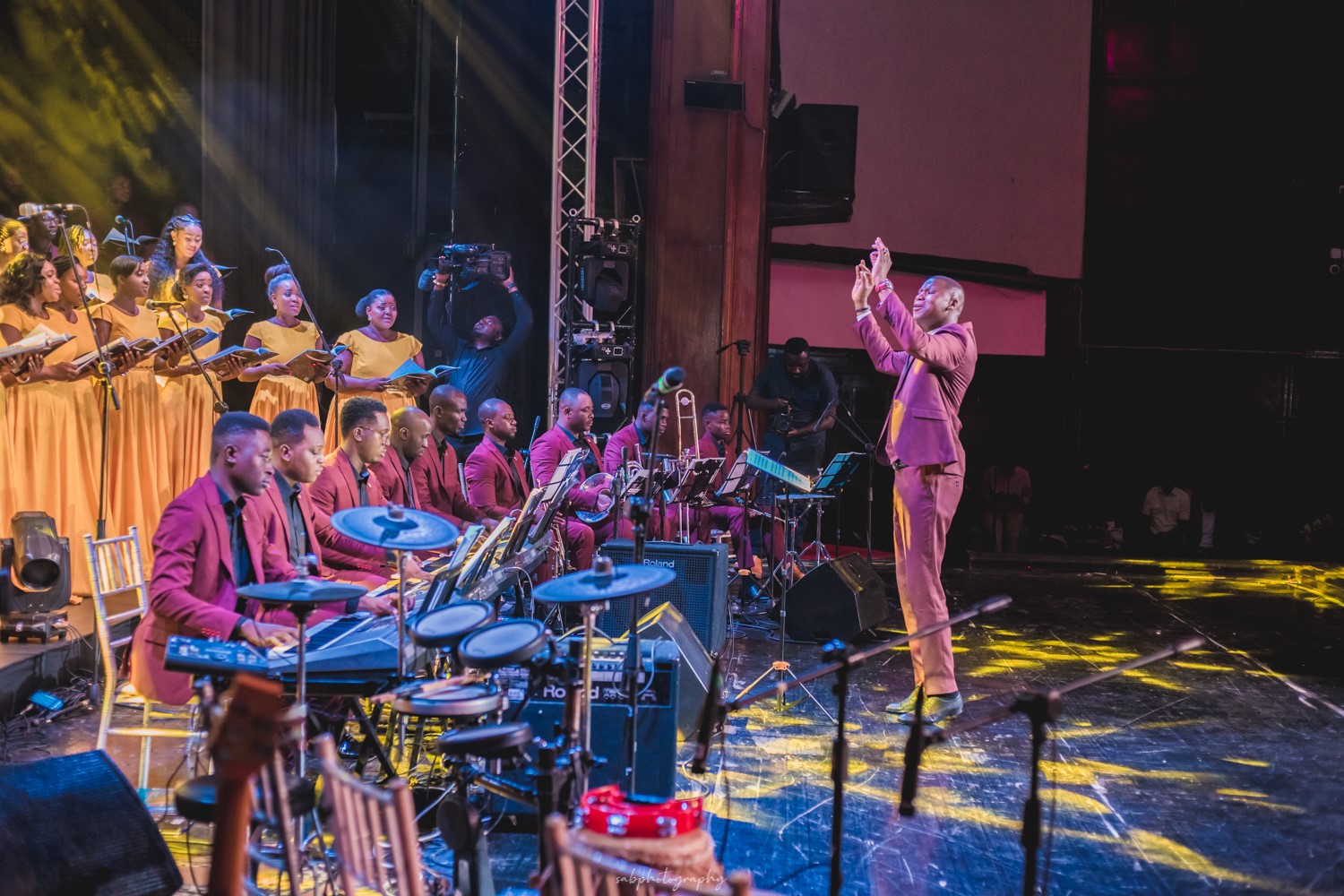 A lot went into the first part of the concert. In many ways, we felt this part captured the essence of the latest Harmonious Chorale event. The second part of the program, conducted by visiting choral director Michael Dingaan from South Africa, was focused on anthems and European “classics”.

Although it was a fairly traditional setting of the choir, this next part of “Our Talents Our Thanksgiving” packed quite a few surprises.

The first of these was the very first anthem sang by the choir: Romauld Twardowski’s “Alleluja”, which represented an unexpected (and very much appreciated) intrusion of Eastern European sacred music into the choir’s repertoire. We have previously highlighted opportunities for Orthodox music in Ghana, after our first encounter with the church community in a suburb of the capital city, and the efforts being made to embed Eastern liturgical music into the Ghanaian context.

Harmonious Chorale’s adventures in Europe and their subsequent outdoor of some of the many things they have encountered may yet bear more fruit for the Ghanaian musical palate.

This was followed by a very lush “My Help Comes from the Lord”, which echoed something we haven’t yet observed in Armaah’s works, while retaining some signatures that are distinctly of the composer’s imagination.

The second surprise from the second part of OTOT came from the final Armaah composition that found its way in that section: “Come Let Us Sing Unto the Lord”. Writing music outside of one’s own cultural context can be a tricky endeavour. As such, we like to approach such works with some hesitation. What we found with the last anthem of the second part of the concert was a very convincing work that drew inspiration from the language of European classical music, while retaining some integrity as an original work from a contemporary Ghanaian composer.

The third part of “Our Talents Our Thanksgiving” was opened by a recitation of James Lowell’s “Once to Every Man and Nation”, led by Enam Akpalu and Emmanuel Akowuah. The choristers, mostly plain-clothed or costumed for various characters, performed a mimed sketch highlighting some ills in Ghanaian society, with a focus on civic duty. 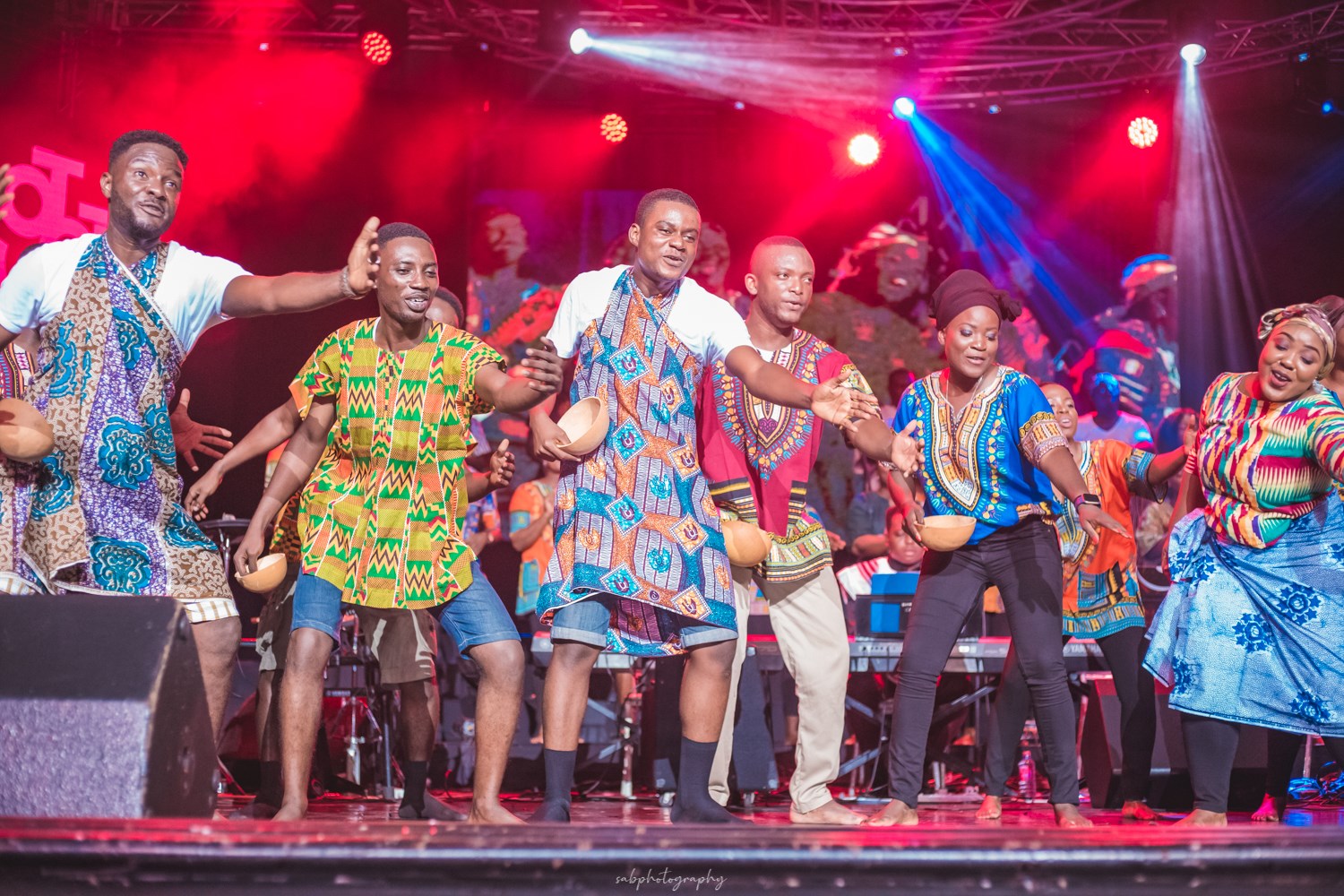 With the fourth part of the concert, the choir returned to its regular programming. Of the six African choruses performed, three were non Ghanaian: the first two were South African spirituals, an unprogrammed piece led by Michael Dingaan himself, and JP Mohapeloa’s Liphala.

The next piece was an absolutely stunning performance of Ayo Oluranti’s “Messiah Baba Mi”, for solo voice and chorus, led by Mitchelle Ajeigbe. The Nigerian work proved to be quite remarkable in its own right: with its accompaniment and chorus sounding distinctly European and contemporary, which blended surprisingly well with the more African melody of the soloist. 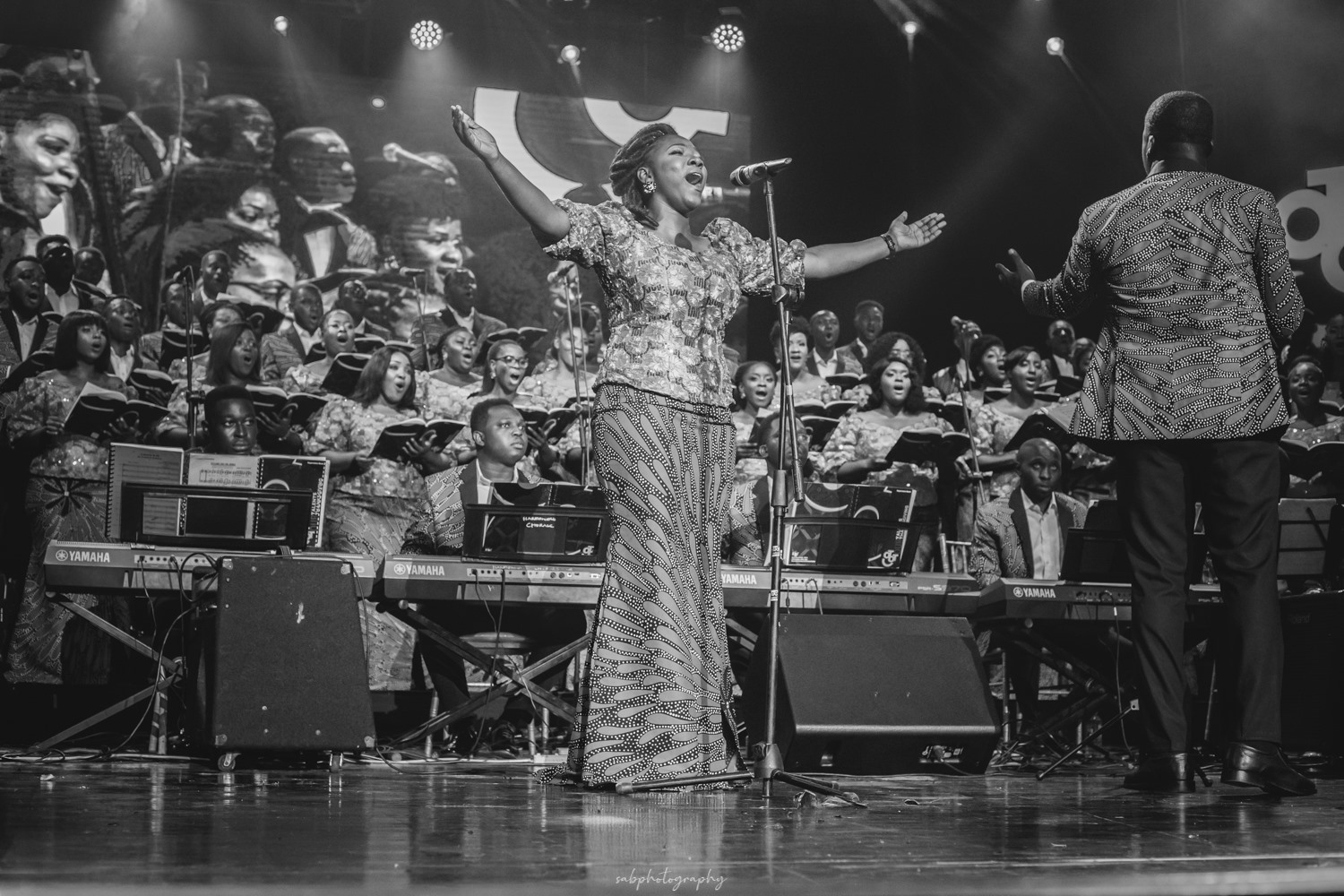 The performance was, for us, the highlight of this section of the concert. After the inspiring climax, our musical excursion ended in Ghana, with three anthems, SK Ayi’s “Suban Pa”, MK Amissah’s “Onyame Ye Hen” and George Mensah Essilfie’s choral arrangement of the folk tune “Zamina Mina”.

Harmonious Chorale’s latest offering was a worthwhile engagement of the numerous musical (and non-musical) talents of the choir. In many ways, it went on to prove the depth of the institution’s musical capabilities, and hints at more diverse, more promising opportunities outside of their usual choral singing.

As with many things touched by the choir, “Our Talents Our Thanksgiving” felt like another routine success story in their long line of achievements in exporting Ghanaian music to the rest of the world.